Worthy Of Our Calling

Worthy Of Our Calling

I therefore, the prisoner of the Lord, beseech you that ye walk worthy of the vocation wherewith ye are called, with all lowliness and meekness, with longsuffering, forbearing one another in love; endeavouring to keep the unity of the Spirit in the bond of peace. “

Doctrine and life belong together, and in such a way that the latter flows out of the former.

Such is the implication of the text before us.

Implicit in the term “therefore” is the doctrine which the apostle had set forth in the first part of his epistle. There he had made known the mystery that God in Christ is gathering together all things in one to the church. Christ, so he says, has been made the head over all things to the church, which is His body, the fulness of Him that filleth all in all.

Incumbent on the church is that she walk worthy of her calling, endeavoring to keep the unity of the Spirit in the bond of peace.

And the latter the apostle weights down with the assertion that he is the prisoner of the Lord. This he says, not to discourage the church, so that some, hearing of his bonds might lose heart, concluding perhaps that if a godly walk leads to jail, it were better not to walk so godly. No, the very opposite is true. His purpose is to incite his readers to walk fearlessly. A godly walk, one that is in the fear of the Lord, is not one that is to be feared, but it is to be counted desirable; provided, of course, that one so bound understands that he is a bond-servant of Jesus Christ. More than once the apostle speaks of his bondage. In the preceding he writes: “I Paul, the prisoner of Jesus Christ for you Gentiles.” And again in the closing part of the epistle: “for which I am an ambassador in bonds: that therein I may speak boldly, as I ought to speak.” And in our text he mentions it once more. That he is a prisoner “in the Lord,” as the original suggests, means that he is a prisoner in respect to the Lord, and therefore for His sake.

I, namely, the one who am a prisoner in the Lord — I beseech you!

I beseech you to walk worthily of the calling, namely, the one by which you were called!

The calling here undoubtedly must be understood in the sense of the saving, efficacious calling which had come unto the church through the preaching of the gospel. This calling is generally distinguished as outward and inward. It is one calling with two aspects. In its outward aspect it comes to us through the preaching of the gospel. Accordingly, we hear it with our physical ears and understand it intellectually. At the same time it is brought to our innermost spiritual understanding, to our hearts, so that we hear not only with our ears, but with our innermost being Christ speaking to us. It is He Who through His Spirit and Word calls us out of darkness into His marvelous light. He who is thus called hears not only the command of Christ to come to Him, but he responds by actually coming to Christ. It is the calling whereby God by His Spirit and Word calls us out of the kingdom of darkness into the kingdom of His dear Son. It is the calling which is irresistible, efficacious, and saving.

It is the purpose of God to gather together all things under one Head, Christ. Such is the doctrine which the apostle had expounded in the preceding context. It is the church of Christ, chosen and redeemed by Christ, which constitutes the center of the “all things” being gathered. And the realization of the church is by the efficacious calling, wherewith the elect are called into the holy unity God in Christ is realizing.

Of that calling the redeemed church is to walk worthily!

One’s walk embraces his whole life, in all its departments, as one lives that life here in the present evil world.

To walk worthy of our calling means to live in this present world in such a way that that walk is in harmony with one’s calling; that is, in such a way that our manner of life in no way negates our belonging to the unity of all things as God purposes to realize it. It means that we consider our belonging to that unity so precious that in thought, word, and deed we never conduct ourselves in such a manner that we deny it. It means positively that our whole manner of conduct in this world is in complete harmony with it.

When we walk worthy of our calling we walk in all lowliness of mind and meekness.

Lowliness of mind, as the word “lowliness” in the original suggests, stands over against sinful and carnal pride. It signifies a deep sense of moral littleness. One possessing and exercising this grace does not seek to exalt himself over another. He remembers the carnal pride from which he has been delivered as a vicious, evil thing. He has been truly humbled, so that he does no longer think much of himself.

Closely connected to lowliness of mind is meekness. One who is small in his own eyes is also meek, gentle, and mild. He esteems others better than himself. Lowliness of mind and meekness characterize the grace whereby we are saved. Earlier the apostle had declared that we are saved by grace through faith, and that not of ourselves, lest any should boast. For we are God’s workmanship, created in Christ Jesus unto good works, which God hath before prepared, in order that we should walk in them. This is indeed a humbling truth! It leaves nothing wherein we can boast in ourselves. Consequently this grace of salvation makes us lowly in mind, and instead of a proud, haughty spirit, the child of God is become meek, gentle. It belongs to the very nature of the grace whereby we are saved to negate self, and exalt God Who saves us in Christ Jesus.

To this the apostle adds: with longsuffering, forbearing one another in love!

With these words he rounds out the character or manner of the walk to which we are exhorted.

Longsuffering and forbearance have to do with our relationship to others in the church. Here it becomes perfectly evident that the church on earth is far from perfect. Her members have many infirmities and weaknesses, and often reveal much of the characteristics of the old man of sin. Yet because they are brought by the grace of God into the sphere of love in which in principle there is perfection, the duty of each member is to seek for the perfection of himself and of one another. That is the implication of the phrase “in love”. When however, much imperfection comes to manifestation in our mutual relation, we are to suffer long with the weaknesses of others, and when they reveal actual evil towards us, we are to bear with them, until they come to repentance or are banished from the visible manifestation of the church.

The thrust of this part of the admonition is therefore that we are to conduct ourselves in such a manner towards one another that more and more we are conformed to the image of Christ.

And the aim and purpose is: that we endeavor to keep the unity of the Spirit in the bond of peace.

This must mean that in principle the unity of the Spirit in the bond of peace is already established.

As was suggested above, it is the purpose of God to gather together all things in one to the church. This purpose God realizes through the Spirit as He is given to Christ the Head. The Holy Spirit of Christ therefore is the subject, the worker of this unity. This unity which He works is realized, first of all, in the church. Consequently, the church is one, as God is one. The church is one body though it is composed of many members. Of this the apostle speaks in succeeding verses: “There is one body, and one Spirit, even as ye are called in one hope of your calling; one Lord, one faith, one baptism, one God and Father of all, Who is above all, and through all, and in you all.” From this circle of unity the Spirit works out until the unity embraces all things, both in heaven, and on earth.

Moreover, this unity further described appears as the sphere in which resides the bond of peace.

Where this unity is established there is no schism, no conflict, no warfare; rather, peace reigns. All disrupting forces have been eradicated. Harmony, tranquility, unanimity prevail. When the Spirit of unity takes hold of us, members of Christ’s church, then we, too, endeavor to keep the unity of the Spirit in the bond of peace. Then we make every effort, strive diligently to guard the unity which the Spirit has wrought.

Rather, by the grace of the Holy Spirit, we believe an holy catholic church, and seek earnestly for its realization. And when we believe that we have found it, we endeavor with all that is in us to guard its unity by insisting on its maintenance of the three characteristic earmarks of the true church, namely, the pure preaching of the Word, the proper administration of the sacraments according to the mind of Christ, and the faithful exercise of Christian discipline.

This implies that we are willing to enter into controversy when the doctrines of the Word of God are denied or corrupted. Where this corruption persists, we are willing by way of reformation to preserve the true doctrine. This implies that when the sacraments are profaned and the members of the church are allowed to do as they please, and where wickedness is condoned, we protest violently through proper channels. And should all our protesting prove fruitless, we cast from us the evil, and establish once more the purest manifestation of the church of Christ upon earth.

O, indeed, the Holy Spirit is not dependent on us to maintain the unity!

He is well able to keep the unity in the bond of peace!

But it is also true that He precisely keeps this unity through the faithful, persistent effort of the church to guard the unity of the Spirit in the bond of peace.

Needless to say, how important it is to heed this admonition today!

So, and so only, will we walk worthy of our calling! 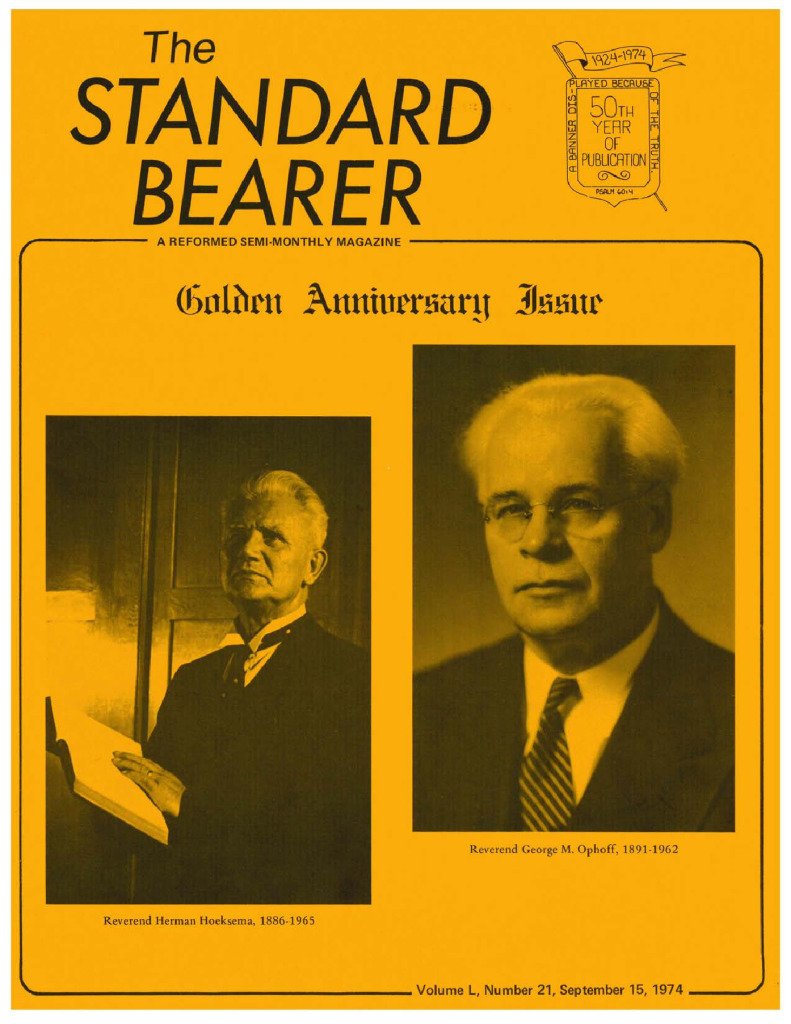