We received the following question: “May women smoke?”

What immediately comes to mind when we read this question is that this kind of question would never have been raised fifty years ago. In those days only men smoked. They smoked their cigars and pipes and no questions were asked. In fact, it was considered manly to smoke. Consistory rooms were hazy with smoke and the stench of the smoke hung in the air for a long time afterward. Part of the enjoyment of a social evening together was the smoking of a good cigar or the aroma of a good pipe tobacco. One wonders at the endurance of the women of those days who spent their evenings in a smoke-filled atmosphere, “enjoying” the stench of second-hand smoke of the male persons present. One even marvels that the housewife did not complain about the brown film on her windows, her new drapes, and on her furniture.

But times have changed. Today many men have given up smoking, while many women have taken over. The pipe and the cigar have been replaced in many instances by the far more convenient cigarette. This was the case in the Netherlands and among the church people there long before it became a practice here. The argument is raised that if men have the right to smoke, the women do also. That can hardly be denied. Some will remind us that smoking has been a common practice in the church, particularly among men, for many years, and these men often reached a ripe old age. Others will argue that smoking belongs to our Christian liberty, or to the adiaphora in our lives, that is, to the things of which Paul speaks that must be left to one’s own conscience.

The ultimate question is, as our reader suggests, Is it right, ethically right, for the Christian to smoke?

In this connection, one thing must be borne in mind, and that is that smoking, particularly cigarette smoking, because the smoke is readily inhaled, has been declared detrimental to the health by the medical profession. Therefore we face the question, Is it right for a Christian to blacken his lungs, to endanger his health, and to expose himself to the threat of emphysema, by smoking? When we bear in mind that smoking is a habit from which one is not readily freed, and that excessive smoking is considered to be detrimental to the health, is it right for the Christian to indulge in smoking and to subject others to the pollution of the atmosphere that he creates? In any case, we may never ignore the admonition of Scripture, “Let your moderation be known unto all men. The Lord is at hand” (Philippians 4:5).

In this connection we should also be reminded of our Christian stewardship. Smoking cigarettes is an expensive habit. One hears repeated complaints about high church budgets, the high cost of mission work, the high tuition bills. I do not doubt that this is a real problem for couples with children. But then we must also confront ourselves with the question that has a much broader scope than the mere question of smoking, whether we are actually putting first things first in our lives. Do we seek first the kingdom of heaven, so that we are more than willing to give up our luxuries for the kingdom? This will obviously become a most serious question for all of us as we approach the end of the ages. “The Lord is at hand.” 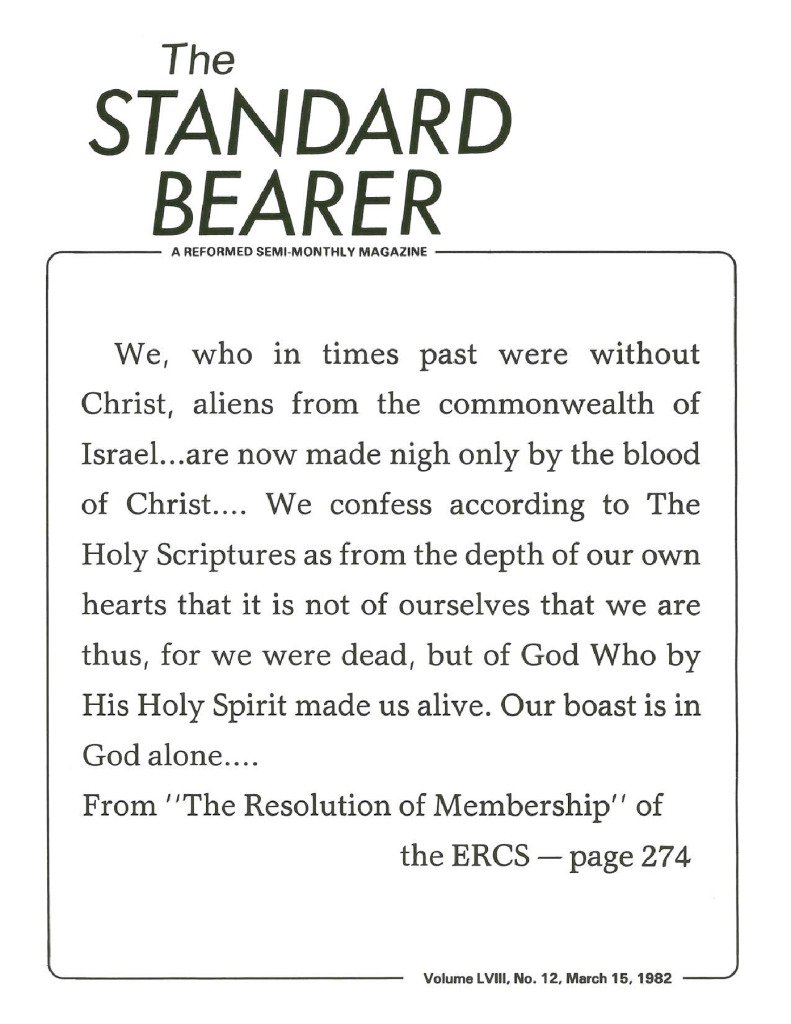