Women and the Selective Service

Women and the Selective Service

So God created man in his own image, in the image of God created he him; male and female created he them.” Holy Scripture sets out the simple truth that God created humans as male and female right at the beginning of the Bible, at the conclusion of the creation history in Genesis 1:27. Yet as simple as this truth would seem, the world increasingly seeks to blur the lines between male and female. First homosexuality became legalized and even promoted by society and by our government institutions. More recently the conflict has focused on so-called “transgender” individuals, who act as if they are a member of the other sex or even try to become a member of the other sex.

While this behavior has been around for years, it is only recently that the law has begun to protect this behavior and penalize those who do not accommodate such lifestyles.

But the blurring of the lines between the sexes takes more subtle forms as well. The movement for “women’s equality” has been around for years. However, this movement has gone far beyond advocating that women are of equal value with men, to essentially advocating that women are no different than men, and that they should be expected to fulfill the same roles as men. This movement has recently manifested itself in legislative actions that may very well require women to register with the Selective Service. Registration for the Selective Service would be the first step towards actually drafting women to serve in the military. The history of this issue once again reminds us that we must be very watchful, because often seemingly insignificant actions by our government have far-reaching ramifications.

The issue began many years ago as advocates of “equal rights” pushed for inclusion of women in the military. The Selective Training and Service Act of 1940 was passed by the 76th United States Congress on September 16, 1940. It required all men between the ages of 18 and 65 to register with the Selective Service. As early as the 1970s, legal challenges were raised as to whether or not it was unconstitutional for only men to be required to register with the Selective Service. However, in 1981, the United States Supreme Court ruled in the case of Rostker v. Goldberg that because they were ineligible for combat roles, women did not need to register for the Selective Service.1 Chief Justice William Rehnquist, writing for the majority, wrote:

The existence of the combat restrictions clearly indicates the basis for Congress’ decision to exempt women from registration. The purpose of registration was to prepare for a draft of combat troops. Since women are excluded from combat, Congress concluded that they would not be needed in the event of a draft, and therefore decided not to register them.2

The combat restrictions referred to was the United States military policy that women could not be in positions that would place them in open combat. This legal precedent, which kept women from having to register with the Selective Service, remained the law from the early 1980s until the present. Then, in December of 2014, the Pentagon announced that it was opening all combat positions to women. This change in policy took place without a great outcry from the public. While some voiced displeasure with the action, stories concerning the change and the opposition to it barely lasted for a normal news cycle. After all, on the face of it this change would only appear to affect women who choose to enter military service and want to be engaged in combat positions. However, as is often the case, this policy change had far-reaching implications that are not readily apparent, implications that affect our daughters as well.

In April of this year, California congressman Duncan Hunter, who is himself a Marine Corp veteran, introduced an amendment to the defense policy bill, which provided that women would also be required to register for the Selective Service.3 Hunter, who is an opponent of having women in combat roles, introduced the measure, which he called the “Draft America’s Daughters” bill, in order to bring discussion of the issue. Apparently, he anticipated that the measure would not pass, and voted against it himself. However, support for the provision was unexpectedly strong, and it passed. The provision was ultimately removed from the final version of the House bill by a procedural maneuver, but a similar pro vision appeared in the Senate version of the bill, which was passed. Since inconsistencies between the houses of Congress must be reconciled before a final bill can be approved for signature by the President, the issue will not be resolved unless the houses come to agreement. However, it appears that if proponents bring the issue up again, it could pass with bi-partisan support, since many prominent Republicans such as John McCain and Mitch McConnell have already voiced support for the measure.

Even if legislation mandating Selective Service registration for women does not pass in Congress, it is possible that a legal challenge could again be mounted by proponents in the courts. As was discussed above in Rostker v. Goldberg, the Supreme Court based its decision largely on the fact that women were not eligible to serve in combat roles, and therefore, exempting them from registration was not improper discrimination. Now that women are eligible for combat roles, this basis for the opinion has been removed. It is possible that the courts could find a different basis to support non-registration, such as the fact that including women in a draft would be counter-productive. For instance, the purpose of the Selective Service is to raise an army quickly if a large-scale war requires more combat troops than are available with the current all-volunteer forces. However, if women are included in the draft pool, this would necessitate sorting out which women are actually physically capable of performing combat duty, which would use precious time and human resources with less results, as presumably far fewer women would be physically able to perform combat duty. However, given the current trend of trying to ignore any differences between the sexes, it is possible that this common-sense issue would be ignored as well.

The question then arises as to what we can and should do if and when the time comes that the law requires that our daughters register with the Selective Service. Some would point out that even though failure to register carries a potential penalty of a $250,000 fine and five years in prison, there have been very few prosecutions for failure to register. Nevertheless, it is our calling to obey the magistrate unless doing so causes us to violate God’s law. Failing to register also prevents an individual from obtaining federal student aid for college or from employment with the federal government.

As with many other issues in this day and age, it is important that we as churches set out clear statements of our positions in regard to this issue. Is it acceptable for a young woman to go to war? If not in a combat role, is it acceptable for a young woman to leave her home and perform a non-combat role for the military? Is it permissible for a young woman to perform some other service in lieu of military service? If so, what type of service would be permissible? We need to provide clear answers to these questions, as well as clear statements demonstrating how our religious beliefs dictate our answers to these questions.

Under current law, even conscientious objectors are required to register with the Selective Service System. Then, if the person is drafted, that individual would have an opportunity to make a claim for classification as a conscientious objector. The person would have to appear before a local draft board to explain her religious beliefs and why they prevent her from serving. In the words of the Selective Service, “In general, the [person]’s lifestyle prior to making his claim must reflect his current claims.”4 It would obviously be helpful if the individual could articulate a clear religious basis for the objection. A conscientious objector who successfully states her case would then be placed in an alternative service program. This would typically be a job in the area of conservation, caring for the very young or very old, education, or health care.5 The length of time of service would be the same as what the military service would have been.

As the world changes rapidly around us, we know that the time will come when we can no longer in good conscience comply with the laws of the world. Our prayer must always be that we will be able to discern when that day arrives, and that our heavenly Father will give us the strength to stand in that day. 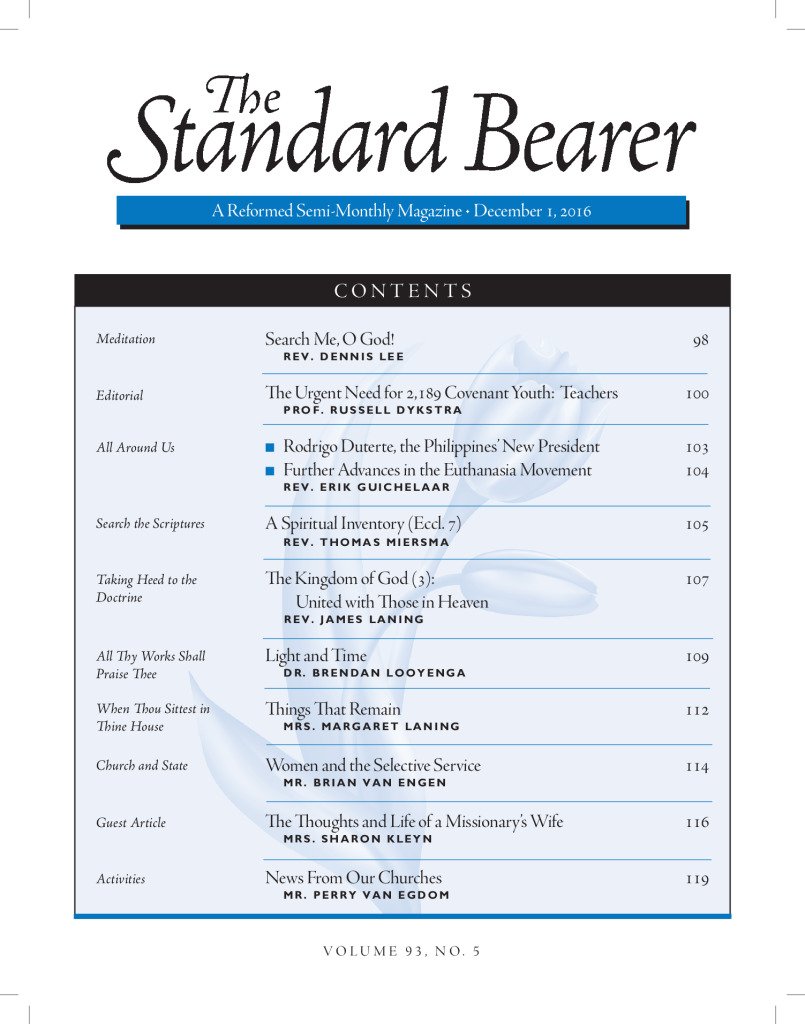