A very startling and heart-rending article entitled “The Battered Children” appears in the October 10 issue ofNewsweek.

“The Baltimore police found Patty Saunders, 9, in the 23-by 52-inch closet where she had been locked for half her life. She weighed only 20 pounds and stood less than 3 feet tall. Smeared with filth, scarred from parental beatings, Patty had become irreparably mentally retarded. “

Gary Ellenburg, 11, was brought to San Francisco General Hospital suffering from severe malnutrition. He weighed 44 pounds, had a temperature of just 84 degrees and was deep in coma. Doctors noticed suspicious marks on his wrists and ankles, and police quickly found the cause: the apartment where Gary lived with his mother and her boyfriend was littered with handcuffs, chains and locks that had apparently been used to immobilize him for hours on end.

“Alyssa Dawn Wilson died at the age of six weeks in a Beauford, S.C., clinic. An autopsy disclosed that the infant had a ruptured liver and spleen, eye injuries, a fractured knee, fourteen broken ribs, bite marks on her cheeks, bruises on her stomach and back and alcohol in her bloodstream. Her father was arrested for murder.”

Newsweek goes on to say that reports of this kind are rapidly increasing. Five years ago only 60,000 cases of child abuse were brought to official attention in the U.S. In 1976, however, the number of reported cases passed the half-million mark. According to estimates of the National Child Abuse and Neglect Center, this represents only half of the child abuse that goes on in our country. Many cases are never reported or discovered. According to the center’s calculations, between 100,000 and 200,000 children are regularly assaulted by their parents with cords, sticks, fists, hot irons, cigarettes, and booted feet; while nearly as many as that are sexually molested. It is further estimated that 700,000 children are denied necessary food, clothing, or shelter. Still according to the estimates of the National Center on Child Abuse and Neglect, at least 2,000 children a year die because of abuse or neglect. That figure ranks abuse as the number five child-killer in the U.S. behind accidents, cancer, congenital abnormalities, and pneumonia. Says director of the National Center on Child Abuse and Neglect, Douglas Besharov, “If you had a disease that affected so many children annually, you would call it an epidemic.” In a soon to be published study of “Violence in the American Family” by Richard Gelles and two colleagues, it is concluded that one out of every 33 children runs the risk of abuse or neglect. Researchers also agree that there is no such thing as a “typical” child abuser. They come from both sexes, all economic strata, every race and religion, and fewer than 10 percent are diagnosed as psychotic.

And what accounts for this gruesome spectacle?Newsweek speaks of child abuse as a “syndrome.” “Syndrome” is a medical term denoting a group of symptoms occurring together that characterize a disease. To speak of child abuse as a syndrome, therefore, is to classify it as a sickness or disease which parents have. Newsweek goes on further to attribute child abuse to ignorance on the part of parents and a lack of education in the proper handling of- children. In support of this conclusion it is pointed out that, in general, parents who abuse their children were themselves abused or neglected in their childhood. The cause of child abuse then is simply that parents do not know any better.

This, of course, is utter folly. It is a deliberate refusal to recognize sin as sin and to recognize another sign of the times.

We read in II Timothy 3:1 ff.: “This know also, that in the last days perilous times shall come. For men shall be lovers of their own selves, covetous, boasters, proud, blasphemers, disobedient to parents, unthankful, unholy, WITHOUT NATURAL AFFECTION. . . .” That explains such a grotesque thing as child abuse—a loss even of natural affection.

The word that is translated “without natural affection” literally means “without love of kindred or family.” It refers not to a spiritual love which is rooted in the love of God and which is the sole possession of the regenerated child of God. The word rather designates a natural love which even the natural man is able to possess. This “love of kindred” is one of the natural gifts that God has bestowed upon all men in general and which man retains to a degree even after the fall. It can be classified as part of “the glimmerings of natural light” of which our Canons speak. It is a gift that God has bestowed even upon the animal world. Even the animals love and care for their young. It is, therefore, this gift of natural affection that explains how even godless, reprobate, unbelieving parents can and will provide and care for their children. It is natural even for the natural man to love and care for his own.

But even this is being lost today in our society. How else can you realistically explain the widespread spectacle of child abuse in our land—even to the point of parents’ maiming and murdering their children. The world may call it a disease. They may attribute it to ignorance. But on the basis of the Bible there is only one explanation—a loss even of natural affection. And this only serves to remind us once again that we live in the “last days” and in the “perilous times” that should come.

But how do we explain this, that parents are losing natural affection even for their children?

We find the answer in the first chapter of Romans. There we are told that the loss of natural affection is the result of God’s judgment and wrath upon sin. We read in verse 18, “For the wrath of God is revealed from heaven against all ungodliness and unrighteousness of men, who hold the truth in unrigheousness.” The Apostle Paul then goes on to explain. God has made Himself known through the works of His hands, even to the heathen who have not the gospel. “For the invisible things of him (i.e., God) from the creation of the world are clearly seen, being understood by the things that are made, even his eternal power and Godhead (vs. 20). In other words, through the creation God makes known to man that He is, that He is God, and that He must be served and glorified as God. But the natural man, perceiving all this, refuses to worship Him. Instead, he makes and serves an idol, thereby changing “the glory of the uncorruptible God into an image made like to corruptible man, and to birds and four footed beasts, and creeping things” (vs. 23). Through his idolatries, the natural man holds the truth in unrighteousness. And therefore God reveals His wrath from heaven, giving man “up to uncleanness through the lusts of their own sin” (vs. 24). God gives them up to “vile affections” (vs. 26), to a “reprobate mind, to do those things which are not convenient” (vs. 28). In other words, God punishes sin with sin. He causes man to grow and develop in sin. He causes man to commit unbelievable sins which are degrading and. unnatural even for the fallen sinner. God makes man worse even than the animal. Paul lists the sin of homosexuality in verses 26 and 27 as a case in point. In verse 31 he makes mention of a loss of natural affection. This is God’s wrath and judgment upon those who refuse to serve and glorify Him.

And understand that this applies not only to the idolatrous heathen who refuses to worship God upon apprehending Him in the creation. This applies also to those who fall under the pale of the gospel and Christendom. It principally makes no difference whether one comes to know of God through the creation or the gospel. Neither does it make any difference whether his idol is an idol of stone and wood, or the idol of earthly treasures and pleasures, or the idol of false doctrine. Whenever man refuses to worship God as He has revealed Himself, God visits that man in His wrath, giving him over to further sin that will manifest itself in the most grotesque way. God always punishes sin with sin.

Is it any wonder then that in our society there is such wide-spread child abuse? Is it any wonder that many parents have lost any and all natural affection for their children? We live in a godless, idolatrous society. All that Paul states in Romans 1 concerning the idolatry of Roman society holds equally true for our society today. We live in a society in which men, when they know God glorify Him not as God. We live in a society that changes the truth of God into a lie, that worships the creature (earthly treasures and pleasures) rather than the Creator. The gruesome statistics quoted inNewsweek only confirm this fact. They also speak of the terrible wrath of God which gives an idolatrous generation over to sin which staggers the imagination. God in His wrath has taken away from parents even the natural affection for their children so that children by the thousands are being abused, maimed, and slaughtered.

This whole matter of child abuse may seem incredible to us. It may even be sickening. I hope it is! But if we understand the underlying cause of it all, then we will also be awe-struck. For this is the hand of God as He hardens the hearts of men, causing them to grow in sin that they might fill the cup of iniquity and make themselves ripe for final judgment.

Finally, there is in all this also a warning for us. Do not think that we are immune from this. Do not think that the saints of God can never fall into such grotesque sins as child abuse and loss of natural affection. If that is your conclusion, then you do well to be reminded of the words of I Cor. 10:12: “Wherefore, let him that thinketh he standeth, take heed lest he fall.” Remember, God always punishes sin with sin. That is true also in the life of the child of God. The Scriptures are full of examples. You live in and follow the way of sin, then God will lead you into greater sin, even into the sins of which we have spoken. Let us, therefore, flee from the godlessness and idolatry of our present age. Let us turn away from every idol, whether it be the idol of riches, or pleasure, or entertainment, or whatever. And let us with purity and singleness of heart serve the Lord our God. 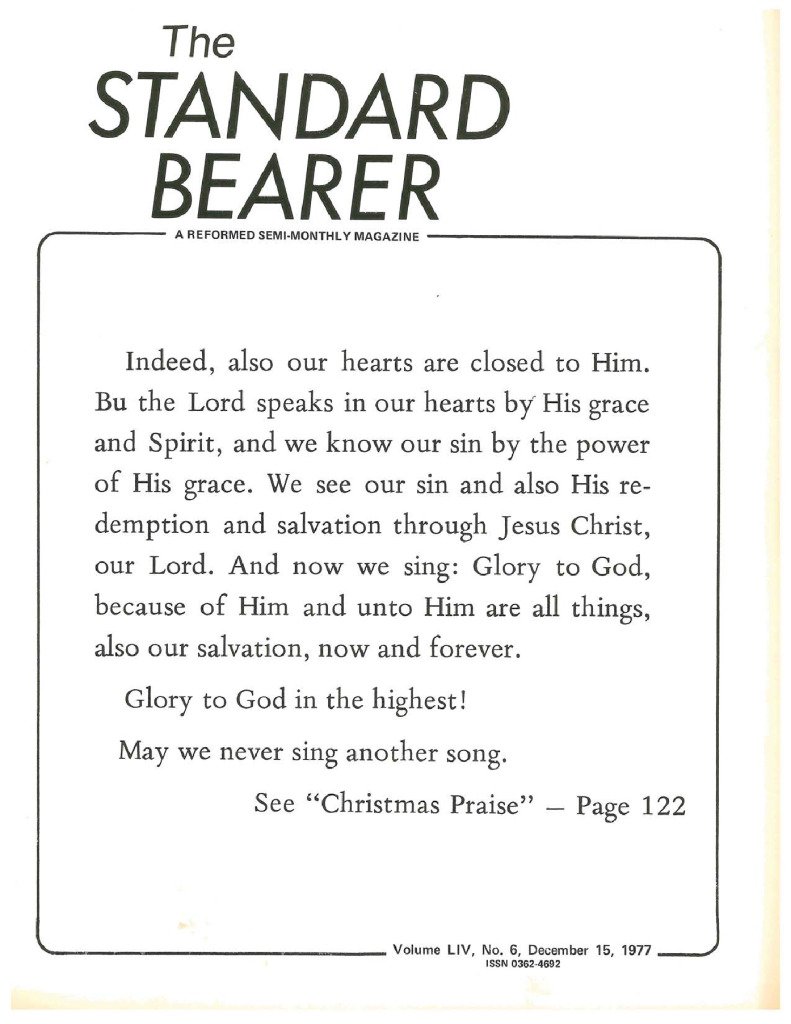