With Christ In Paradise

With Christ In Paradise

“And Jesus said unto him, Verily I say unto thee, Today shalt thou be with me in paradise.”

The second word of the cross!

Spoken by the Lord in answer to the plea of a penitent malefactor!

One of two malefactors who were crucified with Jesus, on either side of Him one, and the Lord in their midst. So the Scripture was fulfilled “and he was numbered with the transgressors.” While Pilate evidently intended by this arrangement of the crosses to heap ridicule upon His head, God so providentially governed the arrangement that the Lord might understand that He was the one of whom the prophet wrote.

Undoubtedly the crosses were so arranged that both of the malefactors could look upon the Saviour, and at the same time study the superscription that had been written and tacked above His head. Written in three different languages, so that no one reading it would fail to comprehend what it stated: “This is Jesus of Nazareth King of the Jews.” A little Bible, so it appeared, evoking conversation of the passersby, and especially of the two sinners in the same condemnation with the Lord.

Not long after the three crosses had been erected did this conversation begin. One of the malefactors railed on Him, and said, “If thou be Christ, save thyself and us.” But the other rebuked him, saying, “Dost thou not fear God? seeing thou art in the same condemnation?” In the eleventh hour of his earthly existence he begins to show evidence that a change has taken place within him. For he continues, “And we indeed justly, for we receive the due reward of our deeds: but this man hath done nothing amiss.”

And Jesus drawing a sharp line of demarcation between them!

All through the long hours of trial and abuse the Lord endured He had no one who came to His defense. All had made themselves guilty of profaning His blessed Name. All of them had derided Him and cursed Him. All were crying bitterly in devilish hatred for His death. Even in their tender mercies, which were so cruel, they gave Him gall to drink. And now, even one who is crucified with Him railed on Him, challenging Him to exercise His powers, if He had any, to free Himself and the dying victims. He, too, read the inscription, which did no more for him than to arouse in his wicked and unbelieving heart the thoughts which rose to his lips whereby he castigates the Name of His anointing. Indeed, here was evidence of the Word which worketh death.

On the other hand, only one, a very precious one, comes to His defense. Only one, in the midst of all that rabble, who summons the last efforts of his dying strength to voice his allegiance to the crucified Saviour.

Listen to him rebuke his fellow sufferer!

Dost thou not fear God? Implying, of course, that he who issues the rebuke did. But whence, then, came that fear? Surely, not of himself. For does he not admit that he is no better than his companion in crime? He knows that he is a despicable sinner who has been justly condemned to die, not only under the sentence of Rome, but evidently also under the sentence of God. Such knowledge of one’s sins as being not only an offence against the State, but an offence against God, one does not have of himself, but of the miracle of grace. His rebuke of his fellow in defense of the Lord was at the same time an acknowledgement of his own sin and unworthiness. The confession of his sin, and the penitence of his heart were expressions of his godly fear.

But the penitent malefactor has much more to say!

After he had declared to his companion in crime the truth concerning Jesus’ innocence, he turns his head to the Lord, and prays.

Jesus, remember me when Thou comest into Thy kingdom!

How thoroughly the Holy Spirit had dinned into his heart the truth he read in that little Bible above Jesus’ head!

Over and over he must have read the inscription: Jesus of Nazareth, King of the Jews! The Holy Spirit, opening the eyes of his heart, must have convinced him that, in spite of the mockery the title had been intended to convey, and in spite of the humbled appearance of the central figure on Golgotha, this was indeed Jehovah-salvation out of Nazareth, Who by His death was laying the very foundation of His kingdom.

How much the penitent malefactor understood concerning that kingdom, it would be difficult to say. That His kingdom was not of this world, he must certainly have surmised: from the fact that the Lord was about to die, and from the fact that he did not agree with the wicked malefactor who called for Christ to come down from the cross to deliver Himself and them. Whether he believed that the Lord would enter His kingdom immediately upon His death, or that he believed that Christ would come with His kingdom at the end of the world, we have no way of knowing. The latter idea is expressed in a second reading of the original text. And if this is the significance of the text, then the answer which the Lord gives to his plea is all the more amazing.

“Verily I say unto thee, Today shalt thou be with Me in paradise!”

Who shall say what that is? Who shall describe its glow?

Undoubtedly it takes its name from that first paradise in the creation of God, that beautiful garden of delights; where man dwelt in creatural perfection that was only earthly, but where nevertheless he dwelt with his God, and walked with Him in blessed fellowship. So long as he remained in the state of righteousness, close to the tree of life, in the very center of the garden man walked in covenant communion with his Creator—God.

That paradise passed away when man through his sin and rebellion against God was banished from His presence. It is lost forever. God having something better, heavenly and eternal, in mind.

Of the grandeur of the latter we can speak only by comparisons with the former, but comparisons which cannot fully portray to earth-bound creatures the sublimity of the heavenly. In the one God was known only as He revealed Himself in the works of creation and providence; in the other it will be as the God of our redemption, as the Father of our Lord and Saviour, Jesus Christ. In the one the tempter could and did enter; from the other he shall forever be shut out. From the one sad exiles were driven out, never to return; in the other the inhabitants shall remain forever. But all such comparisons, we know, cannot satisfy your questions: where and what is paradise?

Paradise is where Jesus is, And if you would know what paradise is, it is to be like unto Him, and to be with Him. There the light has dawned and the shadows have forever fled away. There is no night, for the Lamb is the light of that place. There is perfect holiness, and nothing can enter: which loveth or maketh a lie. It is the state and condition of perfect blessedness; for no tears shall fall there, and all sighing and groaning shall be done away. Paradise is a spiritual condition of glory into which the souls of the redeemed enter immediately upon their departure from the body of this flesh, and in which they consciously abide in the house of mansions; to await the day of the resurrection.

Today shalt thou be with Me in paradise!

For though the plea of the penitent was projected to the day when Christ would come with His kingdom, the Lord informs him that that very day when his eyes would close in death, he would be with. Christ in the glory of His kingdom.

Not only will the Lord remember him, but this very day He will do even more,—He will take him to glory!

O, it brings tears of rejoicing to my eyes, as it must also have filled the eyes of the penitent,—today they together, the penitent with His Lord, would enter with the victor’s song upon their lips into the paradise of God!

The promise of glory to a penitent sinner!

To a sinner who was supernaturally changed in the last moment of his earthly existence!

No preacher was there at the cross to plead with him to accept Jesus before it was too late. No siren call of the gospel offering him a proffered salvation, which he could accept or reject at will, was heard above the din of the rabble that milled about the cross. No warnings of hell-fire were held over his head. This man had no preacher, no offers, no mother’s prayers, no last rites by a priest, no book of common prayers, no nothing. All he was was a poor, miserable, lost, hell-bound sinner by nature; but who suddenly, supernaturally, was regenerated and converted by the pure and sovereign grace of God. Here was a case where no preacher could boast that he had saved another soul for Christ; but it was clearly a case where Christ saves His own souls, the soul of one who was given unto Him of the Father. Here was clear evidence that He did see His seed, as the prophet Isaiah long before had prophesied that He would.

O, do not misunderstand! We do not mean to say with all this that the sinner is saved without any divinely appointed means. Nor would we ignore the preaching of the gospel as the divinely ordained means whereby Christ saves His people.

But we do mean to say that all that was necessary for the malefactor to know concerning the God of his salvation was right before him. That little gospel, that inscription above Jesus’ head, proved to be all that was necessary to bring the spiritual life which God had planted in his heart to true consciousness. Every word in that little gospel, as it was applied by the Holy Spirit to his heart, began to spell out salvation for him.

Jesus! That is Jehovah saves!

Of Nazareth! Signifying that this Jesus, Who is truly Jehovah Who saves, was come in the flesh!

King of the Jews! Thus pointing him to His regal status as God’s appointed and anointed King; but then, too, as the Messianic King that was to come out of the Jewish race.

And as the Spirit began to interpret the words in his heart, the words of the inscription he read with new meaning. Now they did not only say that Jesus of Nazareth was the King of the Jews, but this Jesus was his Saviour, and this King of the Jews was his Lord and King. Now all the cross was for him, and He Who is innocently hanging there and condemned to die was the One Who was dying also for him. How could he remain silent with such a revelation? O, Lord Jesus, remember me when Thou comest into Thy kingdom!

When the elect cry unto Him, verily He will hear them, and surely answer their petition!

Verily I say unto thee, today shalt thou be with Me in paradise!

The penitent malefactor, the first fruits of a veritable harvest!

For they shall come from the east and from the west, from the north and from the south, who are ordained to eternal life, and they shall sit down with Abraham, Isaac, and Jacob, and with Jesus and the malefactor.

Sinners they all are, who are saved by grace!

Who shall fill the paradise of God! 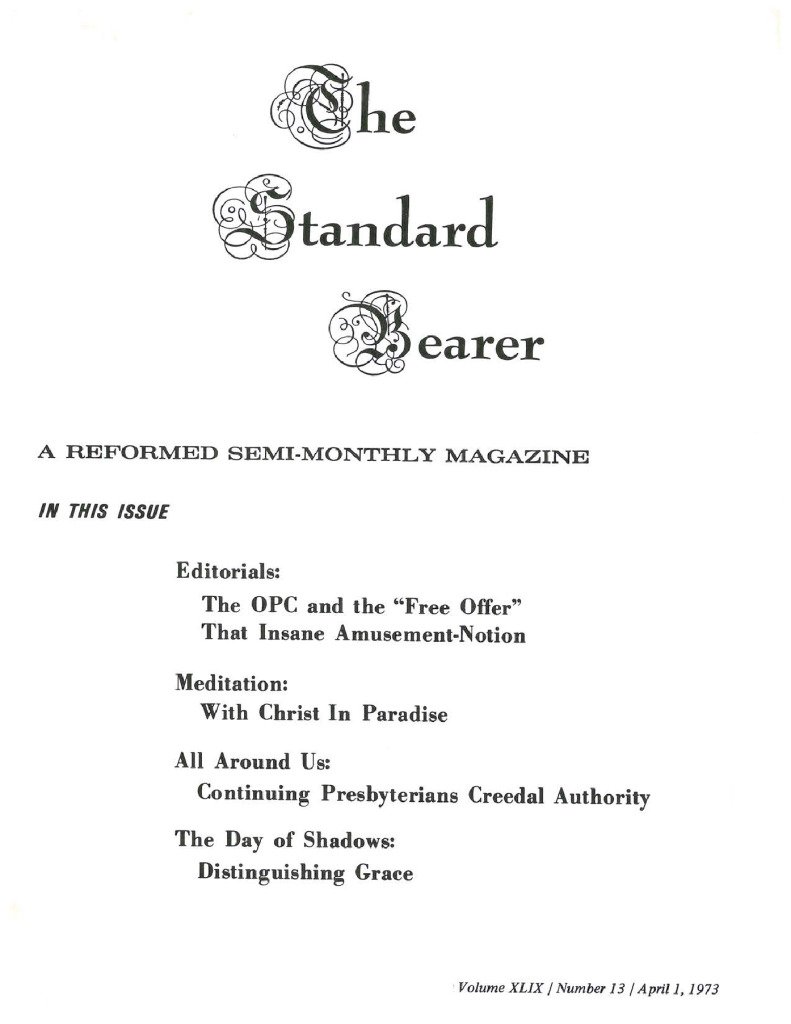