Wisdom is good with an inheritance: and by it there is profit to them that see the sun. For wisdom is a defence, and money is a defence: but the excellency of knowledge is, that wisdom giveth life to them that have it. Consider the work of God: for who can make that straight, which he hath made crooked? In the day of prosperity be joyful, but in the day of adversity consider: God also hath set the one over against the other, to the end that man should find nothing after him. Ecclesiastes 7:11-14

“Wisdom is good with an inheritance: and by it there is profit to them that see the sun” (Eccl. 7:11). After calling us to be patient in spirit in the midst of trials and vexation along the path of life and activity, Solomon now turns to the role of wisdom. One who is soon angry, proud in spirit and questioning God’s ways, walks the way of spiritual folly and works his own spiritual hurt. Wisdom, which is principally the fear of God (that is the aspect of wisdom in view), is profitable in a certain way which he will explain.

The text could better be rendered, “wisdom with an inheritance is good.” While it is possible to understand wisdom as the inheritance, that is, in the sense of a spiritual inheritance, the contrast in the next verse is between wisdom and money or silver and would suggest he has in view first an earthly inheritance. He is speaking too of “them that see the sun.” Material gifts or treasures have a place, but wisdom, with them, is truly profitable. What is profitable, according to the figure in the text, is that which goes over and beyond. It excels and thus profits or benefits. Wisdom is good, a blessing of God, and in that sense it is also a spiritual inheritance of more value than an earthly one alone. Indeed without wisdom, knowledge, and understanding, an earthly inheritance will not truly profit at all. Wisdom profits because it leads us beyond what we see with the eye to a walk by faith, in a humble spirit with patience.

How so? “For wisdom is a defence, and money is a defence; but the excellency of knowledge is that wisdom giveth life to them that have it” (Eccl. 7:12). The idea of a defense draws a picture of a shadow that is a refuge, protection, and defense in trial and trouble. As the shade of a tree protects one from the burning rays of the sun, so, figuratively, a shadow is a protection and defense. Now money or silver, earthly riches, certainly fill that function in some measure under the sun. They may well serve to smooth the way of someone through many of the earthly troubles of life: “The rich man’s wealth is his strong city…” (Prov. 10:15). But such silver or money cannot order all things, nor deliver from death, the end of life’s way, nor answer all the troubles even of life under the sun. Wisdom in the fear of God is more profitable; it goes beyond what earthly treasure can do. It excels or profits because it gives life. It too is a defense and protection to them that see the sun.

The expression “gives life” is one word, which means to make alive. Here, it must be understood that it is God who quickens and works by wisdom to impart life in His grace. Walking in the fear of God, “God is our refuge and strength, a very present help in trouble” (Ps. 46:1). In His shadow as our faithful heavenly Father, the believer is safe in a way that no earthly refuge can afford. But that refuge is known only by faith in the fear of God. That wisdom of faith, which is a gift of God, imparts life in communion with God, grace in time of trouble, and is a spiritual refuge, imparting life to him that has or possesses it. It answers not only present trials but also the end of our earthly sojourning in death and the house of mourning. Wisdom is a spiritual possession beyond an earthly one.

That is something no earthly inheritance can do. Earthly blessings, “the day of prosperity” (Eccl. 7:14), are but for a moment and transitory. Wisdom, which gives life, sustains a meek and patient spirit in trouble and quickens in the hope of an eternal life that is beyond the vanity of this world seen under the sun. To underscore that point, Solomon adds a question: “Consider the work of God: for who can make that straight, which he hath made crooked?” (Eccl. 7:13). God is God Almighty. He determines the times and seasons of life according to His counsel and wisdom. He upholds and governs heaven, earth, and all creatures, as our Heidelberg Catechism puts it, “so that herbs and grass, meat and drink, health and sickness, riches and poverty, yea, and all things come, not by chance, but by His fatherly hand” (LD 10, Q&A 27).

It is the fool who seeks by his own strength or by his wealth to make that straight which God has bent or made crooked. He who is but dust will impose his will on the world, on his own life and order his own way. Yet he fails, and will always fail because he is not God. The answer to Solomon’s question, “Who can make that straight which he hath made crooked?” is this: no mere man. God’s works order the life of all creatures, their time and seasons. He sets boundaries which no man can change. It belongs to the folly of sin and the spirit of antichrist to try to change times and laws and seasons. Yet that which God works stands; it comes to pass.

As we increasingly live in a world that strives with God Almighty, we need to note well what the Word of God says here. God is God, righteous in judgment and merciful unto them that fear Him. For the idea of the text is not that of fatalism or a shrug of despair, but that standing before that wonder of the sovereign majesty of God we may with wisdom, which an understanding heart gives, acknowledge Him to be God, even our God and ourselves His creatures under His hand—yea more, His children adopted of grace in Christ. We would walk in the care of His grace, humbly under His power and in the shadow of His protecting care that gives life to them that fear Him. Solomon then applies this consideration in the following verse, setting prosperity over against adversity, for both shall come under the sun.

“In the day of prosperity be joyful, but in the day of adversity consider: God also hath set the one over against the other, to the end that man should find nothing after him” (Eccl. 7:14). The contrast is not simply between two single days, but, as a figure, also the contrast of seasons or times of life, marked by good or evil from the viewpoint of our life in the world. As such, the idea is broader than prosperity in terms of earthly abundance, but also includes when things go well with us in our course of life. The day may include times of prosperity, health, or circumstances that we find desirable under the sun. In such a day the text says not simply be joyful but uses a word that means “to be good,” so that it includes the idea of a fitting response of thankfulness and contentment as well as a joyful heart. We are to offer up a fitting response for our portion for the day and for God’s provision when our labors also are fruitful and attain the end toward which we labored. These are gifts or blessings of God. They are under His sovereign disposition. They are not due to our own merit, as the world so often ascribes to man in pride of heart.

But Solomon would also have us understand that there are also days of evil, of trouble and distress, of adversity. In such an evil day, whether a single day or a season of life, we are to see or consider God’s design. He has set the one over against the other. These days too, come from His almighty hand, according to His counsel and purpose. This is the instruction also of Job in his troubles, “What? shall we receive good at the hand of God, and shall we not receive evil?” (Job 2:10). Thus Job also says, “The Lord gave, and the Lord hath taken away; blessed be the name of the Lord” (Job 1:21).

It is this consideration Solomon would also have us see. It is easy when things go well with us to take them for granted. When the way is evil in character in earthly terms, a day of trouble and trial, then to say this is God’s work in His providence and receive it with a patient spirit is the way of wisdom. It is the way also to contentment in heart. There is much hidden from us in God’s purpose and works. Solomon points us to one aspect of God’s purpose in such ups and downs in life: God so works to this end, “that man should find nothing after him.” That is, that man, not knowing what the morrow may bring, what comes after him, and thus what the future holds, should be reminded that he is man, a creature of the dust as was Adam his father. It should, in fact, drive him to humble himself before God in whose hand is his life and turn in the fear of God to Him as Lord of all. For finding that his days are not in his own hand, he must turn to God in whose hand is his life and breath. Wisdom in the fear of God does so, while the folly of sin in man is that he walks after his own imagination in pride of heart. The Word of God would teach us the knowledge of the wisdom whose excellency or profit is that it gives life to them that have it. 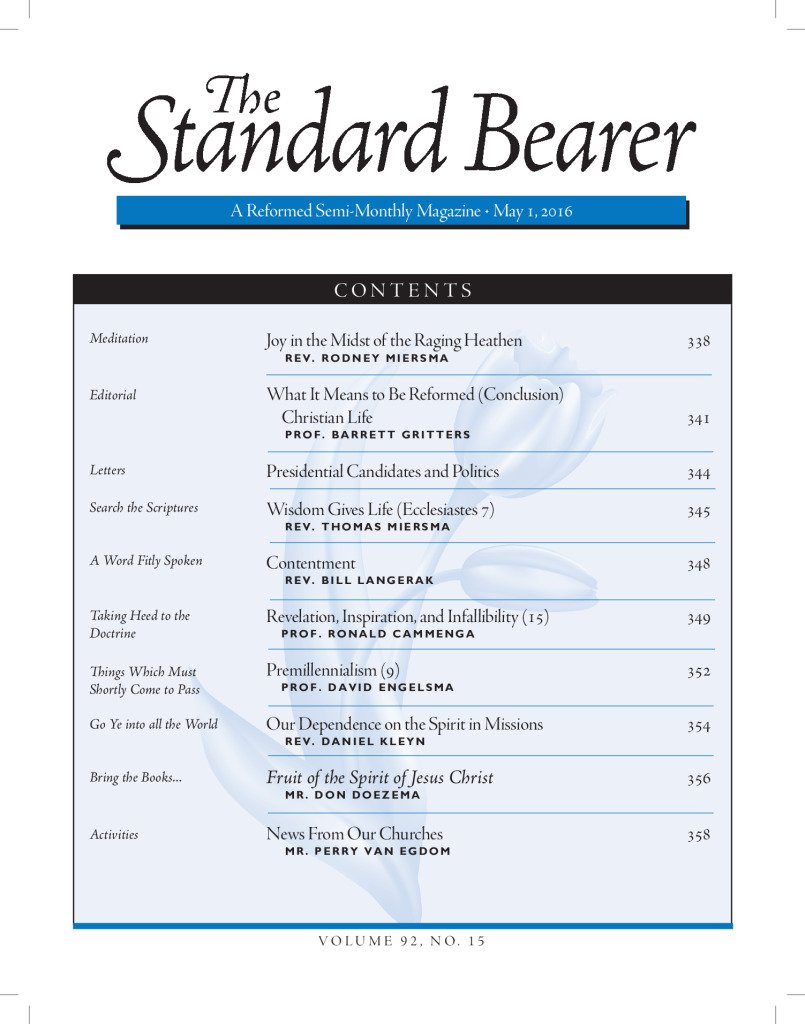