Why Not Come Out With and For the Reformed Truth?

Why Not Come Out With and For the Reformed Truth?

This is the question which arose in my soul when I read a recent editorial on “Sovereignty and Free Choice” in the January 4, 1978 issue of The Presbyterian Journal by Dr. G. Aiken Taylor. The editorial is introduced by the information that the editor had “received several requests in the mail for clarification of the Presbyterian (Reformed) doctrine of election.” Then a typical request is quoted as follows: “Please give us an editorial on election and human choice. Does man have the power to choose? All I have heard lately is that man has no choice; God saves those whom He chooses.”

Here, therefore, a golden opportunity presented itself for the editor to instruct his readers, many of whom belong to the young new Presbyterian Church in America and who have come from the apostate PCUS, or Southern Presbyterian Church. In fact, requests like this could well have become the occasion for a highly instructive series of editorials on the Reformed doctrine of election. From all appearances, this is highly necessary in the PCA. Arminianism and ignorance of Reformed distinctives seem to be rampant in the infant denomination, and the strongly and truly Reformed element appears to be a rather small minority. Some informants have claimed that the battle for the Reformed faith in the PCA is a hopeless one.

But what does Editor Taylor do?

At the most, there are two paragraphs in the editorial which are devoted to the subject of election and human choice, while the questioner asked for an editorial on the subject. There is no attempt whatsoever at a “clarification of the Presbyterian doctrine of election.” Instead there is a studied attempt to relegate Reformed distinctives to the realm of the unimportant and the troublesome. Here is how it is done, and it is all wrong. For a Presbyterian magazine should seek to build up Presbyterians in the Presbyterian faith.

First, the editorial speaks of a “knotty problem” with which Christians have wrestled: “If God is really in charge of all things, does He not also control the direction a person takes in his spiritual life?” Now this is not a knotty problem whatsoever; the answer is perfectly obvious, so obvious that a child can furnish it. Besides, that affirmative answer certainly belongs to the essence of the Reformed truth of sovereign grace. The somewhat “knotty” problem—though not so knotty as many have made it out to be—follows from this affirmative answer: what becomes, then, of human choice and human responsibility? But this problem, which I suspect was the problem of Dr. Taylor’s questioner, is neither stated nor explained.

Secondly, there is a poorly veiled poke at those who have been dubbed by some of the PCA as “TRs”—Truly Reformed. The editorial states—without proving—that “There is today a strong and welcome, but not always judicious, emphasis on Reformed distinctives in some preaching and teaching.” (italics added) Now it is a riddle to me how such an emphasis can at the same time be truly strong and injudicious. When it comes to the Reformed truth, a strong emphasis is also both welcome and judicious: God knows how little emphasis it receives today! On the other hand, an injudicious emphasis, it seems to me, can be neither strong nor welcome. But one who has followed events in the PCA cannot fail to recognize that this comment is in the nature of a gloved-fist jab at TRs.

Thirdly, Taylor draws the totally illogical conclusion from the above that “the first part of the answer to the question, ‘What about election?’ is a reminder that much of the doctrinal distinctives which separate Reformed Christians from others belongs to the periphery of the practice of the presence of God rather than to the center of the fundamentals essential for salvation.” And he goes on to state: “In other words, much of so-called Reformed theology is not so much about the basic details of our immediate relationship to God through Jesus Christ by the power of the Holy Spirit as it is about associated or consequential questions. It deals with the natural curiosity of Christians who want to know how God works, andwhen and with whom.”

In plain language this means: 1) The distinctives of the Reformed faith are not important; they belong to the periphery of our religion and our relationship to God through Christ. 2) Much of Reformed theology is really of secondary importance, and is only the object of the “natural curiosity” of Christians. 3) How and when and with whom God works are not really questions vital to our faith, but only fit objects of a certain natural curiosity of Christians.

Now lest there be doubts as to what Dr. Taylor had in mind by “doctrinal distinctives” and “much of so-called Reformed theology,” let me point out that he himself points to three examples. The first is that of limited versus general atonement. The second is that of total versus partial depravity. The third is that of irresistible versus resistible grace. Taylor then goes on to suggest that “if a preacher bears down on man’s inability to reject God’s grace,” (in other words, stresses that grace is irresistible) “rather than the good news that man is saved by grace,” (and what kind of grace is good news except irresistible grace?)—then “Reformed theology can become a burden rather than a blessing to ordinary people in the pews.”

Finally, at the very end of his editorial, Dr. Taylor first presents a very garbled account of how much a Christian should know, leaving two Biblical truths of election and the necessity of faith and repentance simply side by side and in apparent inexplicable conflict. And then he gives this very brief answer, without further explanation, to the question which occasioned his editorial: “Yes, man makes a free choice within the compass of God’s sovereignty.”

In reflection, we submit the following:

1. Instead of grasping the opportunity to explain the Reformed truth of election, Dr. Taylor does his utmost to belittle the importance of the doctrine of election and related truths, meanwhile utterly failing to help those who requested light of him.

2. The position of Dr. Taylor concerning the importance of these truths is certainly not that of the Westminster Confession of Faith; nor does Dr. Taylor in this editorial follow the example of our Reformed and Presbyterian forbears, who bled and died in many instances for their Reformed profession of faith. To a Reformed man election, for example, is not peripheral and a mere matter of “natural curiosity,” but it is the cor ecclesiae, the heart of the church.

3. Writings such as these will not strengthen the PCA or any other conservative Presbyterians. On the contrary, they can only serve to weaken the church, give aid and comfort to the Arminian enemy, and promote doctrinal indifference. If Dr. Taylor’s position is correct, then why go to the trouble of forming a new denomination such as the PCA? Why not simply separate from the PCUS if necessary, and then join some fundamentalist group? After all, the “doctrinal distinctives which separate Reformed Christians from others” do not belong “to the center of the fundamentals essential for salvation.”

4. For the instruction of those who sought instruction, the least Dr. Taylor might have done was to quote the beautiful third chapter of the Westminster Confession of Faith. This chapter on God’s eternal decree, if studied along with its proof texts, would furnish more help to these seeking souls in the PCA than a hundred editorials of non-answers. Why not come out with the truth and for the truth? 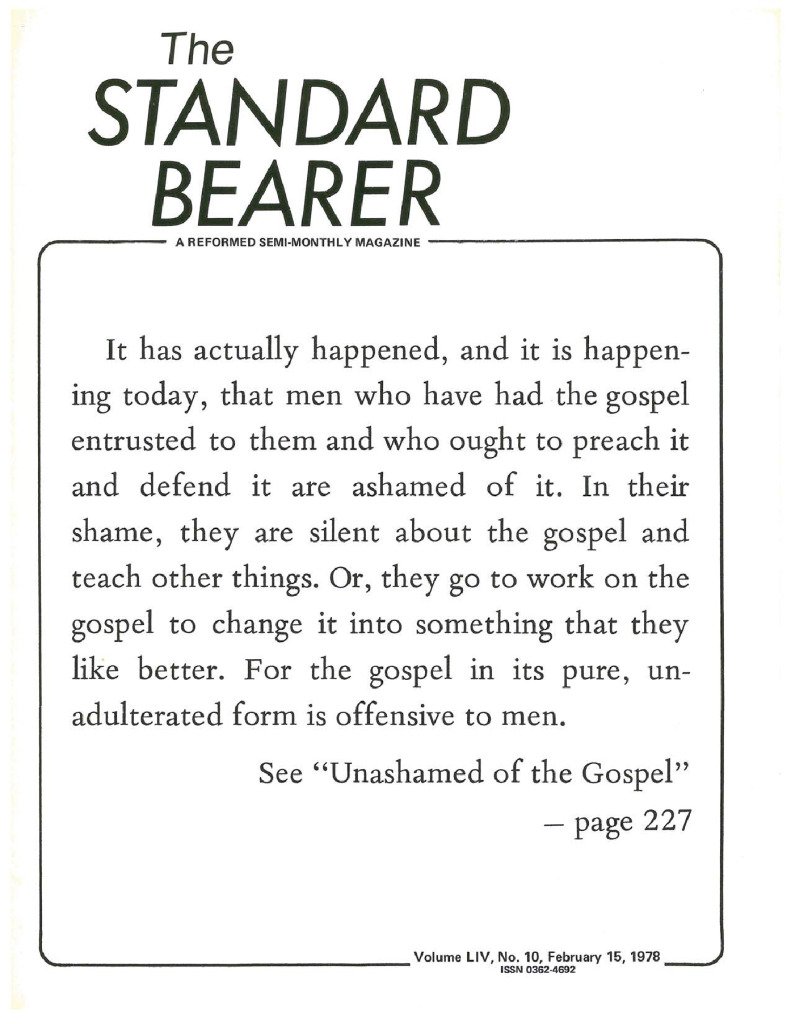