On November 20 Charles Colson and his ecumenical friends released the “Manhattan Declaration: A Call of Christian Conscience.”1 Colson and his friends have invited Christians “to [join] together across historic lines of ecclesiastical differences to affirm our right—and more importantly, to embrace our obligation—to speak and act in defense” of three truths:

1) the profound, inherent, and equal dignity of every human being as a creature fashioned in the very image of God, possessing inherent rights of equal dignity and life; 2) marriage as a conjugal union of man and woman, ordained by God from the creation, and historically understood by believers and non-believers alike to be the most basic institution in society and; 3) religious liberty, which is grounded in the character of God, the example of Christ, and the inherent freedom and dignity of human beings created in the divine image.

The reason I will not sign the declaration is not that I do not support the dignity of human life, or the truth that marriage is union between a man and a woman, or the idea of religious liberty. To be against these things would be something like opposing grandma and apple pie. Who, in their right mind, would do that? The reason I will not sign is that I cannot agree with the Declaration’s explanation of these truths.

As often seems to be the case with documents that intend to appeal to Christians of every creed (or of no creed, as the case may be), the Manhattan Declaration is plagued with vague statements that I would not be comfortable affirming. For example, the declaration says, “Through the centuries, Christianity has taught that civil disobedience is not only permitted, but sometimes required.”

I also will not sign the Manhattan Declaration because, again as is often the case with documents seeking to appeal to a broad range of Christians, it subverts the gospel. As a member of the Protestant Reformed Churches, I object to the Declaration’s affirmation of common grace and the idea that all men retain the image of God after the fall. Both of these ideas weaken the Reformed doctrine of man’s depravity and therefore also detract from the grace of God in salvation through Jesus Christ. A man who is not totally depraved is not totally dependent upon God’s grace for salvation through Jesus Christ. Denial of total depravity is therefore a subversion of the gospel of Jesus Christ.

Consistent with its promotion of the doctrine of common grace, the Declaration subverts the gospel by advocating the idea that the church exists for the sake of the world. Though the Declaration says that the church must proclaim the “Gospel of costly grace,” it claims Christians must seek the “common good” or the “public good.” Thus, the Declaration is committed to the social gospel. Supporters of the social gospel believe that Christians supposedly declare Christ when they seek the good of the world. But that is not true. The gospel of Jesus Christ is about the forgiveness of sins, and that gospel is preached by the church and spread by believers only for the sake of saving elect sinners, not for the purpose of making the world a better place. So the Declaration distracts believers from what the gospel is really about.

I cannot sign a document that subverts the gospel of salvation by God’s grace alone through Jesus Christ.

Is it because I hold to the distinctive views of the Protestant Reformed Churches that I believe the Manhattan Declaration subverts the gospel? No. Every Reformed and Presbyterian Christian ought to reject it because it tolerates the corruption of the gospel of salvation by God’s grace alone through Jesus Christ.

I am not referring now to any section of the document that explicitly denies the sovereign grace of God by teaching that salvation is partially dependent upon man. I am referring to the fact that those who sign this document intend for both those who affirm God’s sovereignty in salvation and those who deny it to set aside their differences in order to come to agreement on the issues dealt with in the Declaration. Reformed people who believe salvation is the work of Jesus Christ alone are expected to sign this document with Roman Catholics, who believe that salvation is the work of sinners themselves (perhaps along with Mary and other saints) in addition to the work of Jesus Christ. The impression is left, then, that Rome’s problem of denying the sufficiency of Christ in the work of salvation is not really so serious and is less important than the fact that Rome is on the right side of some social issues. So far this is already enough to get me worked up.

But especially offensive is the Manhattan Declaration’s effusiveness towards Rome. Those who sign this document compliment Rome for its efforts to promote the “common good.” For example, the Declaration gushes that “Papal edicts in the 16th and 17th centuries decried the practice of slavery and first excommunicated anyone involved in the slave trade.” Not only does a signature affixed to this document overlook Rome’s doctrine, it pats Rome on the back! Do not the Reformed Christians who sign this document remember what else Rome did in the sixteenth and seventeenth centuries? Do they not remember that Rome excommunicated and anathematized people other than those involved in the slave trade, namely, those who were involved in teaching justification by faith alone and all the other great biblical truths of the Reformation? Do they not remember that Rome oppressed faithful, Reformed Christians in a manner that rivals and perhaps surpasses the oppression that slaves experienced under their slave-masters? Rome wreaked havoc on the church and tried to destroy the gospel of Jesus Christ! No, I will not sign the Manhattan Declaration and applaud Rome for seeking the “common good.”

Instead of signing the Manhattan Declaration, I have signed my name to the Belgic Confession, the Heidelberg Catechism, and the Canons of Dordt. I am content with these documents because they set forth the whole counsel of God concerning salvation in Jesus Christ. Let Reformed churches and believers promote the Reformed creeds and the truths contained in them. The world will not become a better place. But by the grace of God sinners will be saved.

1 The “Manhattan Declaration” can be found at www.manhattandeclaration.org. 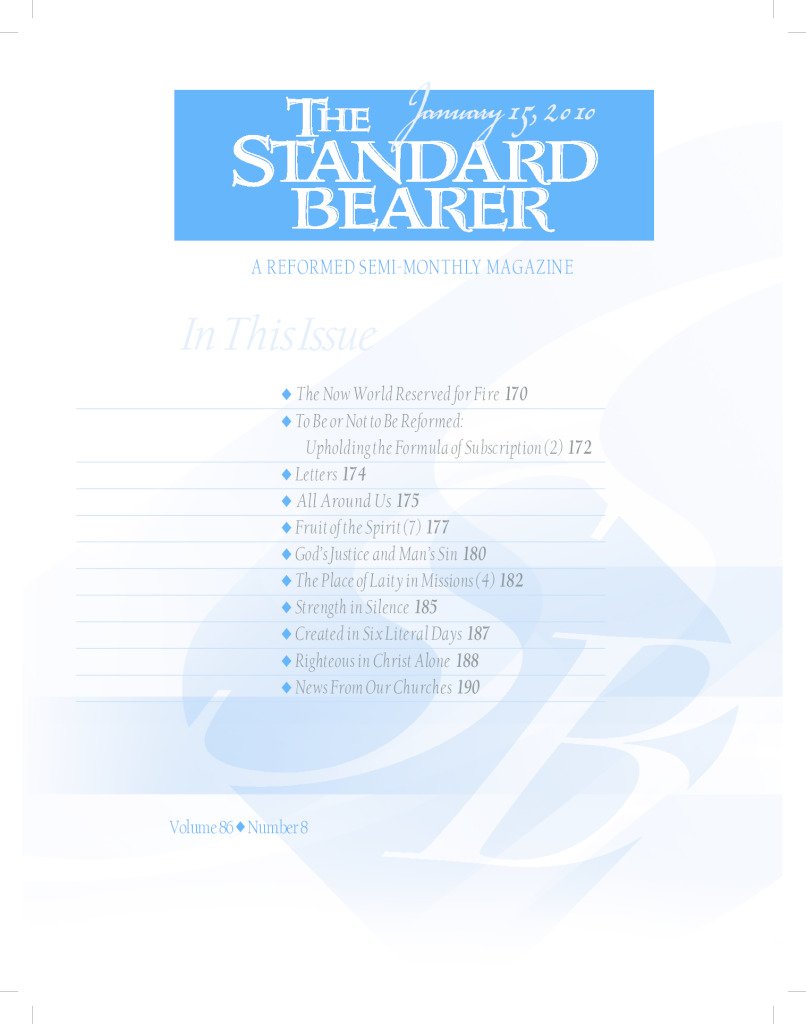