Whose is the Work of Missions?

Whose is the Work of Missions?

If there are questions about de­nominational unity in worship (see the last two editorials), there are as many questions and difficulties regarding the denomina­tion’s unity in missions.

Two divergent views of missions and their relationship to the de­nomination exist in the Protestant Reformed Churches, views that reflect two minds that existed even before the formation of the PRC. One of these views is right, the other wrong.

The one view holds that, even if the local congregation is the “calling church,” which officially sends the missionary, all mission work is de­nominational. Those who hold this view sharply criticize any church that engages in missions “solo,” as they might label it. Worse, they

may accuse such a church of “inde­pendentism,” a label no Reformed church ought to embrace.

The other view holds that a local congregation may do mission work by herself, and that any attempt to force her to give it to the “churches in common” is an incorrect view of Reformed denominational life. Those who hold this view are jeal­ous of the right of the local church alone to preach the gospel. They would criticize their critics by complaining that their autonomy is being challenged.

I have heard from both sides of this debate, and believe that it would be helpful to hold before us what is the Protestant Reformed’s official and unambiguous stand on this question, as well as how we came to have this view. For the peace of the churches, especially for the cause of unity in missions, we ought not be casting aspersions on one another.

Before I answer the question, let me remind us how important it is for us to support missions and our missionaries.

Some of us remember, during the time of the Vietnam war, how damaging it was to the morale of the young soldiers in Vietnam that, back home, everyone was arguing about whether the US should even be involved in the war. On their furloughs the boys came home to protests and jeers. Soldiers need united support behind their efforts. So PRC missionaries—at home and abroad—must know that the churches are pulling together for the cause of the gospel. Then, too, consistories and mission commit­tees should not be distracted by a sense that there is a segment of the church in some way opposed to their work.

There are many ways to remind us of the importance of missions among us, thus getting us to “pull together.” We could hold before us the question that every consistory faces annually at church visita­tion: “Is the congregation busy in the extension of God’s kingdom, especially in the promotion of missions, to the best of its ability?” We could point out that, through­out the history of our churches, in some years almost half of our denominational budget was des­ignated for mission causes. We could remind ourselves that the constitution of the Domestic Mis­sion Committee begins with this striking statement: “The Protes­tant Reformed Churches believe that, in obedience to the command of Christ, the King of the church, to preach the blessed gospel to all creatures, baptizing, and teach­ing them to observe all things which Christ has commanded, it is the explicit duty and sacred privilege of said churches to carry out this calling according to the measure of our God-given ability.” We are churches who, although we confess with sorrow that we have not carried out this sacred duty as faithfully as we ought to have, nevertheless are committed to “declare and publish” the promise and command of the gospel “to all nations and to all persons promis­cuously and without distinction, to whom God out of His good plea­sure sends the gospel” (Canons of Dordt, II:5).

Even if we might not have been aware of the weight of PRC finan­cial resources used for missions, we are aware of those familiar statements from our confessions. What we might not know is that the cause of missions was dear to our Reformed fathers from the very beginning of the Reformed faith in this country. And as you know by now, I am always interested in pro­moting among us a healthy sense of our history.

In 1851, when our Afscheiding (secessionist) ancestors first joined the RCA in West Michigan and met as classis in Holland, they had a “fra­ternal discussion” about the “bound­en duty of the church of God in every way to preach to the world the precious word of salvation.” They were concerned that their present prosperity would fade if their “ac­tive participation in the extension of God’s kingdom (were) neglected.” This neglect, they believed, would incur “double guilt” because of their double blessing: they not only had the truth, but in the land of the free they had the liberty to proclaim the truth. So, repeatedly in their first decades in this country, the classical and synodical assemblies pressed upon the churches to have monthly prayer meetings and regular collec­tions for missions. Newsletters were to be written. A monthly magazine was commissioned to “stimulate the interest of the churches.” Even when they discussed the Christian schools at synods, one of the reasons given for supporting these schools was that persons must be “trained to carry the light of the truth to the blind heathen.” At the same time, to remind us that there is nothing new under the sun also with regard to missions, more than a few times at various synods dissatisfaction was expressed regarding how little mis­sion work was being done. All this took place from 1851 through the early part of last century.

As early as 1886 our fathers even proposed that a third (!) professor be called to the seminary whose fo­cus would be on training missionar­ies. The proposal was not adopted, and I wonder how many negative votes can be attributed to the plan that a portion of the professor’s sal­ary be taken out of synod’s mission fund!

Our early history also includes a moving story about the sacrificial commitment to missions. At a cer­tain discouraging time in the late 1800s when a missionary could not be procured for a field, and after no one volunteered for the work even though repeated calls were made, it was finally reported that “the secretary of the mission committee volunteers himself. He has ear­nestly considered the matter, would greatly desire that somebody else go, but since nobody offers himself, he will seriously consider the call if extended to him. The proposal was unanimously accepted… and he was called for a period of at least 5 years at a salary of….”

We have a rich history in mis­sions prior to our separate existence as Protestant Reformed churches. One part of it—may we remember this for a long time, perhaps even revisit it as churches—is the 1910 Synod that promoted missions by declaring seven mandates for the churches:

1. That mission sermons be preached repeatedly to the congre­gation;

2. That the subject of missions be taught in the catechism classes as much as possible;

3. That a lesson on missions be taught quarterly in the Sunday school;

4. That existing societies make a systematic study of missions;

5. That mission fests be held an­nually as much as possible;

6. That each local church strive to support a missionary;

7. That systematic weekly offer­ings be taken for missions.

The PRC’s current decisions, as well as our history, ought to encour­age us not only to mission zeal, but also to unity of mind and heart.

So back to our question. Whose is the work of missions? The offi­cial position of the PRC is that one of the views is wrong and the other right. The right view is that missions is the work of the local congregation, and that some mis­sions may become the concern of the churches in common. Those who are critical of a consistory doing missions without denomi­national supervision fail to take into account our denomination’s official view of responsibility for the work of missions. On the other hand, those who maintain the prerogative of the local con­sistory to do missions on her own rightly protect the autonomy of the local congregation and should (carefully) dismiss the accusation of independentism.

I hasten to add that a local con­gregation may not be wise doing missions alone. They may not be wise to go on without the collec­tive experience and support of the denomination. At times a church may be guilty of an attitude of independentism. I hope to raise the matter of wise judgments in the next editorial. But it is wrong immediately to criticize a local congregation for doing missions without the denomination’s direct oversight.

I also hasten to add that the question is not as simple as it may first appear to be. The question involves the definition of missions. It involves distinctions, between foreign missions and home mis­sions; between local evangelism and church extension work; between witnessing and preaching; between a church having and supporting contacts and a church actually call­ing a missionary to a field. Many factors are involved in the ques­tion.

But the question itself has been answered by the PRC. The synod­ically-approved constitution of the mission committee says: “Although mission work is the calling of the local church… some mission work may also become the work of the churches in common” (emphasis added). How this statement came to have a place in the constitution is a story for the next editorial. Whether the statement is biblical, confessional, and faithful to Re­formed ecclesiology and church pol­ity may be examined in the proper manner by any in the churches. But there is no question that the constitution states two things:

1. Mission work is the calling of the local congregation.

2. Some mission work may be­come the work of the “churches in common,” that is, of the denomina­tion. Then the local church receives help—advice, supervision, and financial support—from all her sister congregations banded together in the synod.

Next time I hope to show the history of this expression in the constitution, the sharp criticisms that were made of it, and the de­termination of synod to maintain it. Also, God willing, we can be­gin a discussion of some related questions, such as: At what point should a consistory decide that her mission work ought to have the supervision of the denomination? Is there ever a case when a con­gregation may engage in missions without ever seeking to do it with the rest of the body? And are the answers to these questions depen­dent on the kind of mission work being performed?

In the meantime, let us all go forward in this “explicit duty and sacred privilege” with the prayer that God will gather His church and that He will use us—the little Protestant Reformed Churches—as instruments in that gathering. Let us pray that our maintenance of truth may be to this end: that the beautiful gospel God gave us to proclaim to the ends of the earth may be the sword of Christ to make captives for Christ, gathering them into the great army of Christ that battles for the glory of Christ, until this same Christ comes again, ask­ing at that day, “Have you been busy in the mandate I gave to you in my parting words to you?”

“Go ye therefore, and teach all nations, baptizing them in the name of the Father, and of the Son, and of the Holy Ghost: Teaching them to observe all things whatsoever I have commanded you: and, lo, I am with you alway, even unto the end of the world. Amen.” 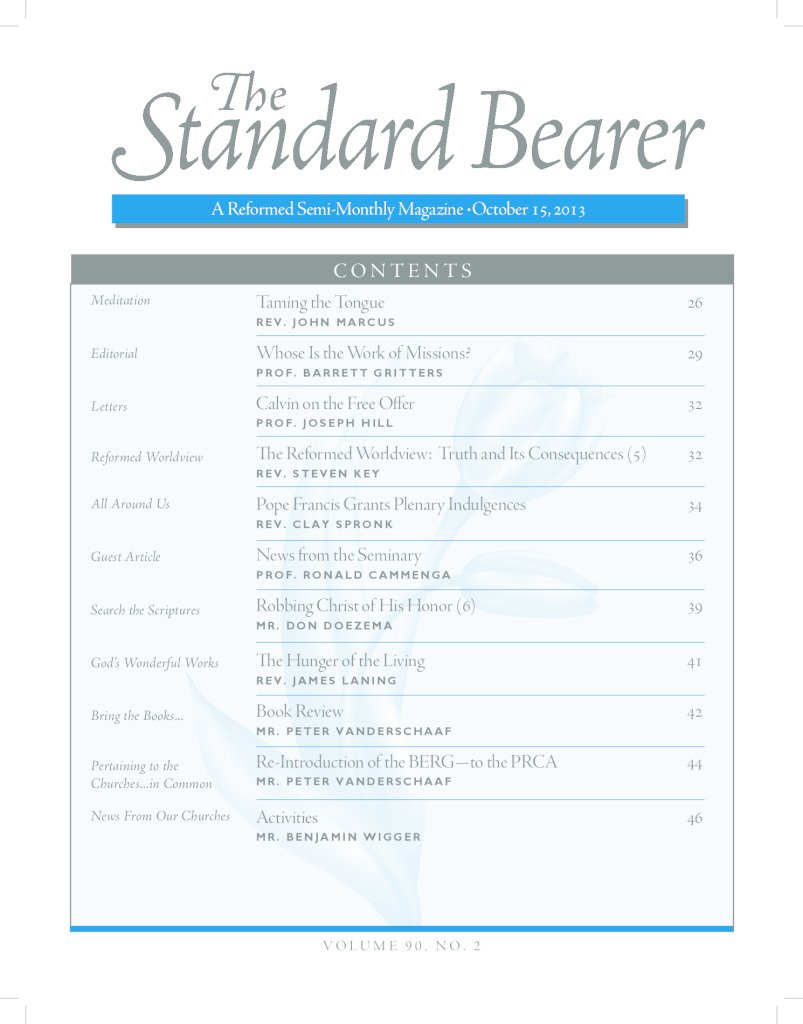