Knowing that our people are always interested in reactions to such books, we are copying two recent re­views on Rev. Hoeksema’s latest book “Baptized Into Christ.”

The first review is by Rev. J. K. Van Raalen, well-known to all of us that are at all acquainted with the history up to and including 1924, now minister of the Christian Reformed Church of Edmonton, Alberta, Canada. He writes in The Banner of November 2, as follows:

“Baptized Into Christ”, by the Rev. H. Hoeksema.

“The book contains much that is good. The so­vereignty of God is stressed as it is too little in today’s religious literature in America. But it also has some weak points. Its chief fault is that (as in the con­troversy about common grace) we are promised in ad­vance an improvement upon the great Dutch theolo­gians, but we are sorely disappointed. Then it was ‘the organic development of evil.’ Now we are told that ‘In the more recent Dutch theologians one finds a glimmer of deeper and richer notion of the covenant.’ The author, who is deadly afraid of all signs of bi-laterialism in the covenant (throughout it has to be God alone, and one-sided or unilateral) finally comes to the chapter, The Idea of the Covenant.’ We read on eagerly, looking for that further development of the ‘glimmerings’ of Kuyper and Bavinck. We are told that the essence of the covenant is unilateral in its origin in God, and becomes bilateral when God causes man to enter into fellowship with him. At any rate, we are not told how fellowship can remain one-sided.

“There are other errors in this book. An unwar­ranted conclusion is drawn from the First Helvetic Confession because (p. 89) ‘Erwahlt’ is translated re­generated instead of elect. The author recognizes only an unconditional promise of the gospel, to the elect. His morbid fear of Arminianism causes him to deny the promise of salvation upon the condition of (even a God-given) faith, p. 114. On page 140 we are told that the standard Reformed view of the covenant of works is ‘pure fiction.’ That standard view is that ‘Do this and thou shalt live’ meant a living beyond the life Adam already had, that is, eternal life. Without any ground or proof we are treated to the ‘pure fic­tion’ that these words meant Adam would have con­tinued to live on the earth. Again, the opponents of Rev. Hoeksema are pushed into a corner in which they refuse to dwell. Thus we are told on page 35 that al­ways ‘the altar call’ is ‘a hawking of Jesus in its worst form, a burlesque caricature of the preaching of the apostles.’ While on page 139 the Reformed are re­minded that ‘The covenant between God and man can never be a pact . . . with mutual stipulations, condi­tion, and promises.” Which, of course, no Reformed theologian has ever claimed for either the covenant of works or of grace.

“The worst feature of the book is that an unscriptural, one-sided view of God leads to an unsatisfactory presentation of the gospel. On the concluding page it is correctly stated that ‘the sign, and seal of the covenant is a savor of life for the children of the pro­mise, it is at the same time a savor of death unto death to the reprobate.’ ‘We must watch, therefore.’ But watch unto what? Unto a being moved with com­passion, as was Paul, and a ‘persuading men’? No: we must watch because ‘it is our calling to walk as spiritual children of the covenant/ The author does not preach to believers and unbelievers, but to the elect who show signs of regeneration. He takes his point of departure in the hidden things of God. That is neither supralapsarianism nor Calvinism. It is known as hyper-calvinism.”

He writes as follows:

“If the reader is interested in the Heidelberg Ca­techism, he should obtain this book. This volume con­stitutes the sixth in Hoeksema’s exposition of the Ca­techism. It covers the material contained in Lord’s Days 25, 26 and 27. As theologian and pastor the author proves himself an able expositor of this Re­formed confession.

“Hoeksema is a careful workman. He operates deftly with many distinctions necessary in Reformed thinking. The opening chapter deals with the means of grace. After carefully detailing the four main usages of the concept grace, he gives the following definition of the means of grace. ‘When we speak of means of grace, we refer to grace in the fourth or sub­jective sense of the word. It is through means that the Holy Spirit works faith in our hearts, affects with­in us the grace of the O Lord Jesus Christ, and bestows upon us all the blessing of salvation.’ (p. 21). No doubt, if God’s people would make more prayerful and diligent use of the means, their commitment of faith would be more relevant and meaningful today.

“There is an exceptionally worthwhile chapter op ‘Preaching as a Means of Grace.’ As many today carelessly disregard and discredit the office of the ministry this chapter gains cogency. ‘Today every­body preaches, except those perhaps, whose specific calling it is.’ (page 28.) ‘Preaching is the authorita­tive proclamation of the gospel by the Church in the service of the Word through Christ.’ (p. 29.) As such the following elements are involved: 1) being sent; 2) the proclamation of the whole Word of God; 3) by the church; 4) it is the service of the Word of God through Christ, for only Christ through the Spirit can make preaching of the Word powerful and ef­ficacious as a means of grace. With freelance preach­ing gaining ascendency, it is well to reemphasize the Biblical basis of preaching.

“The authoritative character of true preaching lies in the theme of all preaching. This theme is Jesus Christ as the revelation of the God of our salvation. Joined with this emphasis is a chapter on ‘Preaching in the Covenant.’ It is worth reading twice over. As the same Word of Christ is brought to all, it becomes evident that it is a savor of life unto life unto God’s chosen, and a savor of death unto death unto all others.

“There is much valuable confessional material on the idea of the covenant. In Hoeksema’s discussion the view of the late Prof. Heyns, Professor at Calvin Seminary, is thoroughly criticized. Hoeksema is in­sistent upon making the distinction between the cove­nant as a means to an end and as an end in itself. At all costs he wants nothing to do with the covenant as a means to an end. This point is labored to weari­some lengths.

“Certain questions refuse to be silenced when read­ing Hoeksema’s understanding of the covenant idea. How does he fit Esau and Judas into the covenant? What happens to history? Is not the covenant in the process of realization? Is not the covenant in a cer­tain sense a method of the administration of God’s grace? Hoeksema apparently leaves no room for the distinction, historically maintained in Reformed cir­cles and certainly not Scripturally unwarranted, be­tween the covenant as an external and internal rela­tionship? Though this distinction must be employed with care, and though it does not answer all the prob­lems, it does appear to point up the limits within which we must confine our understanding of the covenant. One cannot escape the impression that Hoeksema wants to do the impossible. That is, he wants to har­monize for mere mortals the secret and revealed will of God. No one can bring together election and the historical realization of the covenant. Certainly not by restricting the covenant idea as exclusively an end in itself.

“One regrets that the author sets up straw men in his discussion. This becomes apparent in his fulminations against the idea of the covenant of works. In connection with the covenant of works Reformed thinkers have always operated carefully with the dis­tinction between the principle of justice and the prin­ciple of grace, especially in understanding the proba­tionary command. Hoeksema summarily dismisses the distinction with this statement. ‘But I object that God cannot deny Himself, and that even by grace He cannot so condescend to man that the latter becomes a party next to Him, even though the relation is pre­sented as one between a very great party and a very small party.’ (p. 139.) The reader is very uncon­vinced. Furthermore, no one who understands the covenant of works thinks of man as setting up his re­latively autonomous stipulations as Hoeksema would have his readers believe.

“Despite such questions, we would heartily recom­mend reading this book, as well as the preceding vol­umes. Hoeksema is Reformed, and demonstrates him­self an able writer. We hope that God will spare the brother and give him strength to complete his work on the Heidelberg Catechism. Meanwhile we look for­ward to the next volume.”

Since book reviews are, to an extent at least, pri­vileged we shall refrain from making even the most obvious comments. 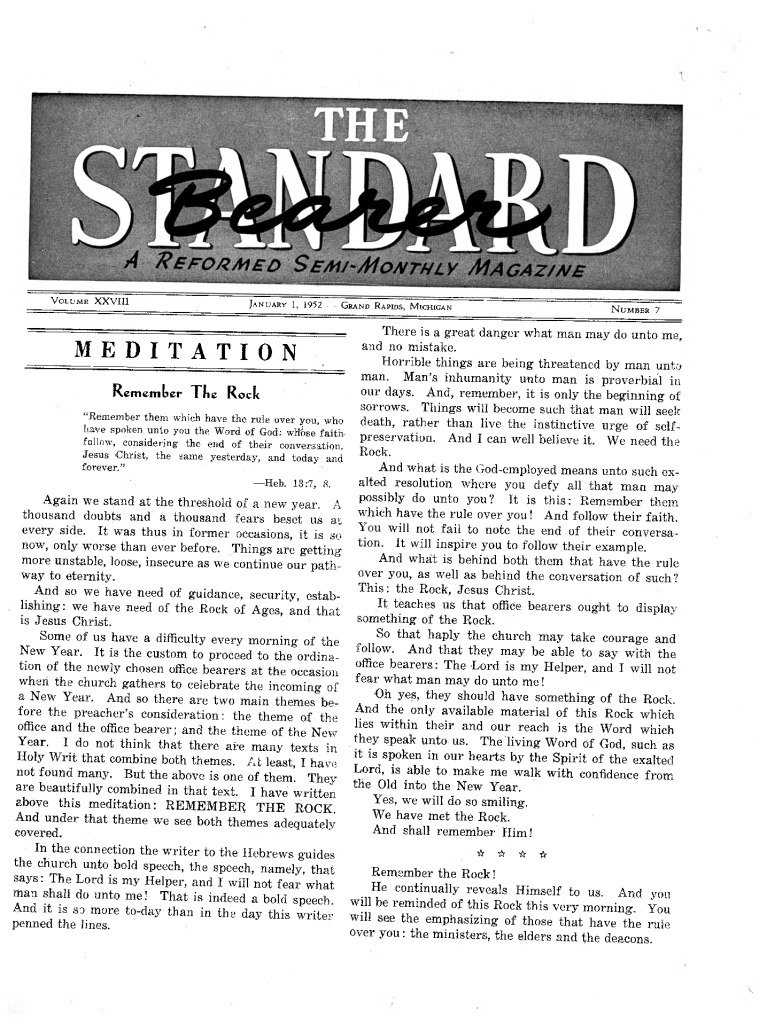