What It Means to Be Reformed (13): Reformed, yet “Always Reforming”?

Or does the charge stick, that the confessions are simply the “Paper Pope” of Protestantism—infallible and unchangeable? Is it, in fact, true that we Reformed folks blindly follow all our confessions—the Three Forms of Unity, as well as the Baptism Form, Lord’s Supper Form, Marriage Form, and Church Order—unwilling and probably unable to change anything about them, as the Roman Catholic faithful view their Pontiff?

The answer is a proper understanding of that Reformed slogan, semper reformanda (“always reforming”), almost as old as the Reformation itself.

A proper understanding of that important maxim is: A Reformed church wants to adopt the mentality that she constantly examines herself by the Word of God, to ensure that she is indeed faithful to that Word of God—the ultimate standard—and reforms herself when she has become deformed.

The origin of the saying is uncertain. Historians have searched for the origin and give different views both of its origin and original intent. Most of them agree that the first use was in the 1670s by Jodocus van Lodenstein, a Reformed preacher in the Netherlands, although even he did not speak of it as an aphorism, or use the precise words we are familiar with. Various forms of the phrase were used by other Reformed men, until the full expression, most agree, came to be ecclesia reformata et semper reformanda secundus verbum Dei.1 That is, the church, having been reformed, must continue to be reformed according to God’s Word. What the full expression brings out is that: 1) the reference is to the church; 2) the reference is not to any church but to the Reformed church that stands in the tradition of the sixteenth century Reformation; 3) the constant reformation of this church must be only according to the infallible standard of Scripture.

The adage itself has no real authority among us.

The phrase is not from the confessions. It has no ecclesiastical definition. It has not, as far as I am aware, been adopted by any Reformed assembly and thus given a formal definition or standing.

Some suggest that the initial intent of the expression had nothing to do with the church’s doctrine, worship, or government, since these were addressed sufficiently at the Reformation, but had to do with personal conduct and piety. This view ties the phrase to the “Second Reformation,” (in the Dutch, the Nadere Reformatie) whose emphasis was on reformation of life, on personal godliness. The Reformation went far, it was thought, but not far enough. Now, what is deformed in heart and life must be corrected. Reformed, indeed, but always reforming. Attractive as that view may be, in certain respects, proper understanding and use of the phrase is not mainly personal, but ecclesiastical—ecclesia reformata….

Recognizing the need always to be reforming one’s heart and life, though not the proper understanding of the phrase, is not dangerous. The phrase, however, is hi-jacked and misused today by those who promote serial upgrades of the church’s theology, perpetual revision of her liturgy, annual amendments to her government—changing the church as often as millennials change their smart-phones or redecorate their homes. For example, the so-called emergent church has stolen the phrase, wanting nothing of Reformation truth and desiring a form of church that Christianity has never before seen. Also, the Federal Vision heretics promote their errors with appeal to semper reformanda, now supposing that the motto should smooth the way to reconsider covenant theology and take a fresh look at Paul’s doctrine of justification.

But even sincere Reformed believers can hear the phrase without understanding its intent. Then they live with a certain unease if their church does not change or adopt something new every so often.

A basic understanding of the Reformation itself will guard us from such improper applications of semper re. If we only remember the Reformers’ determinations, we will be safe in our own use of the expression. The Reformers never wanted anything more than to 1) reject what was in error, 2) sharpen what was unclear, and 3) retain everything else. And it’s this “retain everything that is not out of focus or in error” that we must remember.

“The church, being reformed and always being reformed,” then, fits well with being confessional. The church is glad for the creeds, unchanged; satisfied with the church’s government as we have it (mostly) from Dordt; and rejoices in her liturgy that remains very much the same from generation to generation.

What, then, is semper reformanda?

Starting with two basic Reformed principles, we can receive good counsel from the expression semper re.

First, a Reformed believer begins confessing the absolute and sole authority of the Word of God. All else is subordinate to Scripture and subject to its scrutiny. Whatever does not measure up to this standard is crooked and must be discarded or made straight.

Second, the Reformed believer understands that the church always tends toward corruption—a kind of ecclesiastical entropy—because of the sinfulness of every member and the wiles of the devil. History shows this and we must learn from history. Rarely does a church or body of churches not degenerate. The Old Testament reveals the same pattern, that new generations usually deviate, often slowly, and probably with the attitude that all is well in Zion.

And because of those twin truths, the motto semper re is not merely permissible for us to adopt, perhaps someday even formally; it is vitally important. A Reformed church must adopt a mentality: we are Reformed but we must never rest on our laurels, lest we arrive at church some Sunday morning to see 95 theses nailed to our sanctuary door.

Starting with those two Reformed principles—the sole authority of God’s Word and the depravity of man’s nature—the good counsel of semper re can be repeated and spelled out, now very carefully: We are always testing ourselves with the Word of God to see whether, in doctrine or conduct, personally or ecclesiastically, we measure up; and if not, we correct ourselves (Reforming!) according to that Word. In these ways:

1. By discarding or changing what is still defective. Even since the Reformation, although the likelihood of this is smaller, some error may have been retained that Reformed Christianity has yet to put away. Is an example of this the doctrine of the relation between church and state as the Belgic Confession expresses it in Article 36? The footnote adopted in 1910, which remains but a footnote, and is the subject of continued debate, shows the difficulty of changing creeds. Is another example the doctrine of divorce and remarriage as adopted by the Reformers (not in the Three Forms of Unity, but codified in the Westminster Standards), perhaps in improper over-reaction to the Roman Catholics?

2. By adding what has been missing. Since the Spirit of truth always leads the church into all truth, and since no church may assume that she knows everything as she ought to know, the church today may be able to see further, understand more deeply, and develop beyond what her fathers did. In the past, when heretics threatened the church, the Lord used that heresy to spur her on to develop truth that she had not explained thoroughly enough in the past. Today, the charismatic errors regarding the Holy Spirit and the millennial errors in eschatology are examples where the church may have opportunity to add confessional declarations of scriptural truth.

3. By restoring what (over time) has been lost, or rejecting what (over time) has been improperly added. This point addresses the tendency of sinners to depart from right, to lose what is good, and add what is evil. Jesus showed the way when, early in His ministry, He challenged the assumptions of the church leaders and called them “to the sources” (ad fontes!) to see the true intent of the law of God. What “has been said among you of old times” is not what “I say unto you.” At a different time, in response to their perverted doctrine of marriage and divorce, Jesus said, “From the beginning it was not so.” To use a different kind of example, a good tradition today becomes “law” and then is imposed upon others, for example, on a mission field and in a different culture. Or, different yet, over-reaction to an error becomes ensconced as orthodoxy, and only after a generation the church realizes her response went too far. It takes the church time, but especially the grace of humility, to examine herself in these regards. And her safety is her standard: Everything is examined by the Word of God. Everything.

4. By revising what must be changed because of changing circumstances. Church Order revisions come to mind here. What the PRC did in 2001 with the Church Order not only may be done, but at times must be done. To give only one example, the old version of the Church Order forbad “funeral sermons,” speaking to Roman Catholic times when funerals were allowed into a worship service. We changed the Church Order there. The Church Order itself mandates change if the profit of the churches is in view: “…may and ought to be altered, augmented, or diminished.”

5. By reforming personal conduct. What van Lodenstein and his colleagues (Hoornbeeck, Koelman, and their predecessor Voetius) emphasized regarding personal piety is worth noting here as well, and is not out of place in a discussion of always reforming. Our confessions themselves tell us to be always improving, spiritually. The expression “more and more,” repeated so often in the creeds, is simply a reflection of the Scripture’s injunction to “abound yet more and more,” to “approve things that are excellent,” and to go “from glory to glory” in our being conformed to the image of our Lord Jesus Christ.

But there are dangers. The Reformers were fond of reminding the church of dangers that threaten from two sides. And here there is risk of looking for danger in only one direction. It makes you think of the Brit’s friendly cautions to the American visitors who, because of our traffic customs, cross the street looking first to the left. On London’s curbs are the warnings, “Look Right!” It depends on where we are in history, and in what circumstances we find ourselves, but we Reformed must be willing to look both ways for dangers.

On the one hand, as we have already seen, those who misuse the motto semper reformanda to promote constant change must be put in their place. On the other hand, those whose tendency is to suppose that the status quo is always pleasing to God must be reminded that the church is always to be examining herself by the Word of God. G.K. Chesterton, himself no friend of the Reformed faith, but whose understanding of church and society was perceptive, once pointedly remarked: “The business of Progressives is to go on making mistakes. The business of the Conservatives is to prevent the mistakes from being corrected.” But we are neither progressives nor conservatives. We are Reformed.

John Calvin was not shy to give his impression of where was the greatest danger in his own time. Whatever your judgment of today, and where you are, God’s wisdom counsels us to be sure to look both ways.

There is value in having a slogan like semper reformanda. Let it remind us to be Berean-like Christians, who always go home asking whether these things be true and right, searching the Scriptures (Acts 17). So when moderns “mutter” and today’s “wizards peep” (see Is. 8), may we Reformed Christians call one to another, in the spirit of Isaiah, “should not a people seek unto their God? To the law and to the testimony!” (Is. 8:20).

1 The last part of the Latin expression, secundus verbum Dei, (according to the Word of God) was not added, it is thought, until the early twentieth century when the motto was popularized. 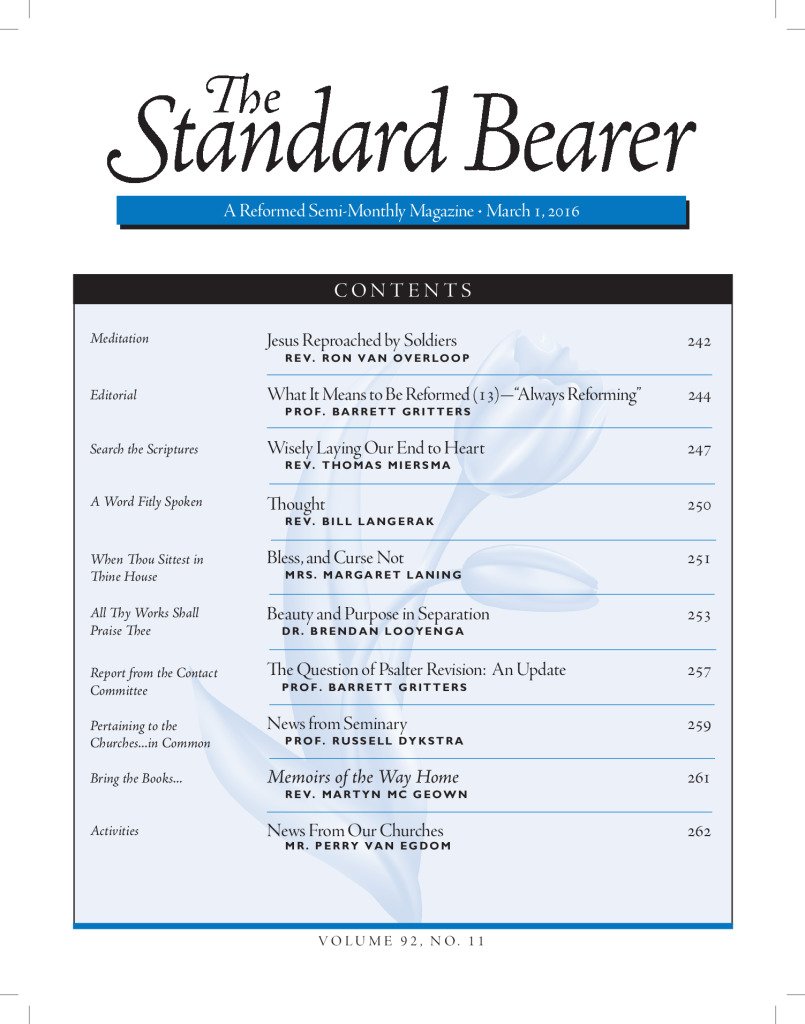