What is the Mission of the Church? Making Sense of Social Justice, Shalom, and the Great Commission, by Kevin DeYoung and Greg Gilbert.

What is the Mission of the Church? Making Sense of Social Justice, Shalom, and the Great Commission, by Kevin DeYoung and Greg Gilbert.

“Be missional,” “transform culture,” “build the kingdom,” “be incarnational,” “be Jesus to the world,” “ensure social justice,” “be kingdom agents,” “seek the Shalom of the city.” If you have heard any of these buzzwords you have come into contact with the modern view of the mission of the church in the world. Kevin DeYoung and Greg Gilbert have written a book to examine carefully those buzzwords and the mentality behind them, and to set forth a biblical view of the mission of the church.

The word “mission,” though not a biblical word, is a fine word to use to speak of the calling of the church in the world. As the authors of the book define the word, it simply answers the question, “What is the specific task or purpose that the church is sent into the world to ac­complish?” (20). DeYoung and Gilbert believe that the modern church has a skewed answer to that question, and they aim to bring a corrective balance to the church’s view of what she ought to be doing in the world.

The book is aimed at the transformationalist world­view that has its origins in the neo-calvinism of Abraham Kuyper and his spiritual children, and that has thor­oughly infiltrated Christian colleges and the missiology of the church world today. Recently, there has been some kickback against this worldview, and DeYoung and Gil­bert’s book represents an aspect of that opposition.

In my judgment the authors are successful in accom­plishing their purpose with the book. This book is a beacon in the night. Written at a popular level, but not skimping on exegesis or theology, the book carefully and correctly wades through the mess that is modern mission theory, and calls the church back to the mission Christ gave her before His ascension.

DeYoung and Gilbert define the mission of the church as the calling “to go into the world and make disciples by declaring the gospel of Jesus Christ in the power of the Spirit and gathering these disciples into churches, that they might worship the Lord and obey His commands now and into eternity to the glory of God the Father” (62). This proposition they derive from Scripture. Indeed, one of the main strengths of the book is that it is thor­oughly biblical. There are ten chapters in the book, and three of them are straight exposition of Scripture—and not dry, but lively exposition at that. Out of their thor­ough and Calvinistic exegesis, the authors carefully define the buzzwords that are commonly misunderstood today: shalom, justice, kingdom, etc. Doing so, they correct the misunderstandings (whether ignorant or willful) in the church world today.

Chapter three of the book takes a sweeping view of the whole of Scripture along the lines of the common fourfold division: creation, fall, redemption, consummation. The authors conclude on the basis of the broad storyline of the Bible,

The whole story is not, as one author suggests, about us becoming “conduits for him to bring healing to earth and its residents.” It’s not about our call “to partner in a restorative work so that the torch of hope is carried until Christ returns.” The story is not about us working with God to make the world right again. It’s about God’s work to make us right so we can live with him again (89).

Not willing to fall to the emotional appeal of the notion that we are the kingdom builders, the book emphasizes the scriptural truth that God builds His kingdom, and we are witnesses of that work, heralds of that work, testifiers to that work.

The book includes refreshing work on passages of the Bible that promoters of the transformationalist view use to give content to their buzzwords. Writing on Jeremiah 29:7, where the Israelites are called to seek the peace (sha­lom) of Babylon, the authors state,

They were not to seek Babylon’s shalom because they were to be building for the kingdom there, but for their own well-being. “In its welfare you will find your welfare” (Jer. 29:7). The Israelite exiles were not seeking any long term shalom of the city, much less the ultimate, eternal kind. In fact, their ultimate hope for Babylon was that it would be not at all peaceful, but completely destroyed (Jer. 50:2, 29) . . . . It’s simply impossible to maintain the meaning of Jeremiah 29:7 . . . that so many modern authors want to give it: that it is an Old Testament statement of the mission of the people of God, namely, that we are to be working toward the eternal blessedness of the cities in which we live by engaging with their social structures (202).

In one of two chapters on “making sense of social jus­ tice,” the writers remind the church that “the least of these” in Matthew 25 we are called to aid are Christian brothers and sisters in the church (162). They rightly point out that of course we help anyone and everyone we can when we have opportunity, but the judgment that accords with works in Matthew 25 will be in accordance with works done for love of the brethren in particular. In that same section of the book, commenting on the Old Testament passages that speak of do­ing justice, especially Micah 6:8, the writers say,

As we’ve seen time after time in these ‘social justice’ passages, the classic form of injustice is siding with the rich against the poor because the former will pay you for it and the latter cannot do anything to stop you (emphasis theirs) . . . . Doing justice is not the same as redistribution . . . it implies fairness, decency, and honesty (161).

A wonderful chapter is chapter five on the kingdom of God. The writers affirm that “the New Testament uses the phrase ‘kingdom of God’ to refer to God’s reign specifically over his redeemed people.” They explain that God’s kingdom is not defined by geographical territory, but refers to Christ’s rule or reign over His elect. The calling then is to proclaim the kingdom, and to live as citizens of the kingdom. They draw the conclusion that a proper definition of kingdom “keeps us from thinking that extending the kingdom of God is the right way to describe planting trees or delivering hot meals to the homeless” (120-121). They rightly say that planting trees is a good thing, and delivering meals to the homeless is a good thing, but they are not in themselves the work of building the kingdom.

Another benefit of the book is that it is balanced. The writers are concerned to define concepts correctly and then put them in their right place relative to the mission Christ gave to the church. Their goal is to have priorities straight, to make sure that the calling to spread the gospel and make disciples stays priority number one.

They are also careful not to fall into a ditch of their own in order to prevent people from going into the ditch they write against. Instead of transforming culture, they offer a replacement phrase to describe the Christian’s involvement in all spheres of life: “faithful presence.” Instead of kingdom building they offer the more biblical notion of “living as citizens of the kingdom” in all of life. Instead of social justice, they call us back to the biblical notion of “loving the neighbor” (p. 21). They speak of the effects of the kingdom of God in the world, and laud those effects where God in His sovereignty chooses to redeem enough people to allow for those effects to exist. They carefully define the difference between the church institute and the church as organism, calling the members of the church to be active in serving others in their lives as God calls us to do, but reminding us that not everything individual Christians are called to do is also the calling of the church institute (232).

They are careful not to promote a mentality in the church that is self-centered and void of motivation for good works. I quote an extensive portion of the book:

We are of the strong opinion that the Bible teaches that we Christians are to be a people of both declaration and demon­stration. God has redeemed us from all lawlessness and made us a people for his own possession who are zealous for good works. Our hope in this book, in fact, has not been in any way to discourage good works, but rather to encourage them in the long run by being crystal clear about where and how good works fit into Christian theology and into the Christian life. So why do we do good? If “building the kingdom,” “proclaiming the gospel without words,” and “joining God in his work of making all things new,” are not correct motivations for good works, what are? (223-224).

They go on to answer: obedience to God whom we love, love for our neighbors, to show the world God’s character and work, they are the fruit of the Spirit in us, and to win a hearing for the gospel, if God so wills (224-229).

The only substantial criticism I have is not of what is said, but of what is left out. There is little to no mention of the covenant in the book. It seems to me, any book hoping to deal with such a broad category as the mission of the church ought to connect that to the only category that is broader, the doctrine of the covenant. The church’s mission is as the authors describe, but it is so as part of God’s work to establish His covenant. One book cannot do it all, I understand, but recognition at least of the im­portance of the covenant would have been appreciated.13

The book is written in a winsome style characteristic of DeYoung’s material. I most urgently recommend the book for evangelism committees, young adults in Christian col­leges, and parents of young adults in Christian colleges. But the book is much needed, good, clear thinking for all the church, every member of which ought to be concerned with what the body of Christ is supposed to be doing in the world in these last days.

1 Gilbert is a Calvinistic Baptist, but DeYoung is Reformed. 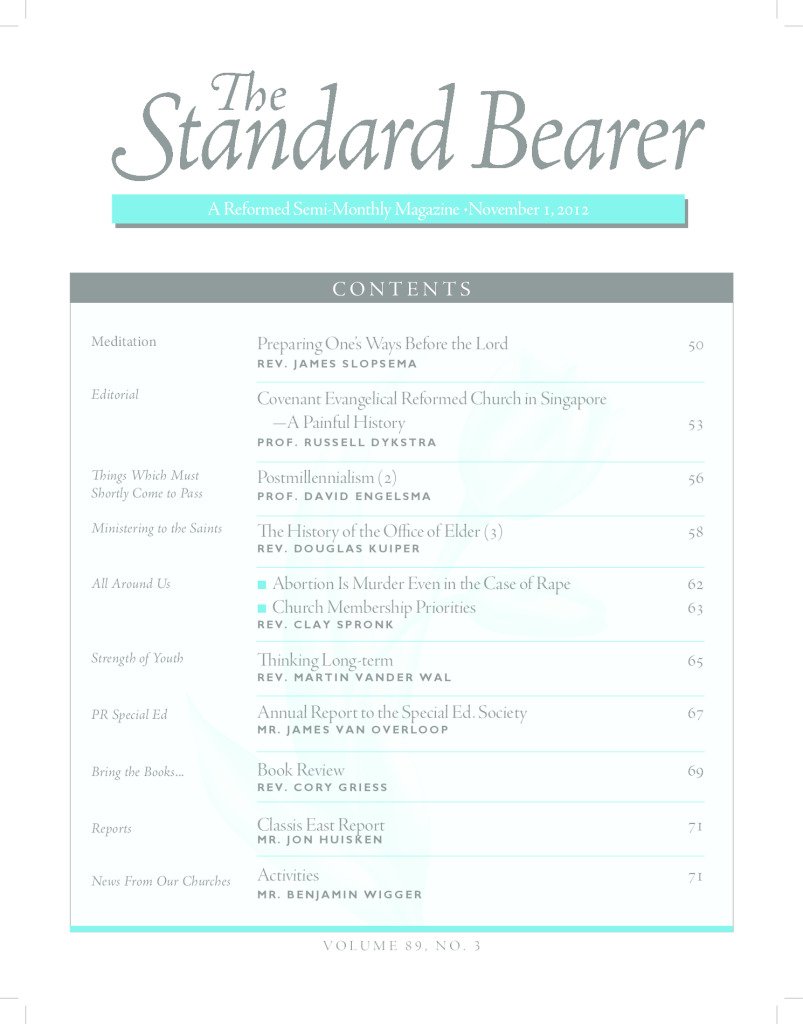