What have you done with God? The question of elenctics

Elenctics, an aspect of the mission and witness of the church of Jesus Christ in the world, asks a vital question. “In all elenctics,” wrote the Dutch Reformed missiologist J. H. Bavinck, “the concern is always with the all-important question: ‘What have you done with God?’”[1]

You, man of this world, have done something with God. What have you done with Him?

The answer to that question of elenctics points us to one of the important elements of our task in missions and witnessing.

In missions and witnessing, there is an encounter be­tween the believer and the unbeliever somewhere in the midst of the world. We are not of the world yet we live in the world, and therefore we encounter the unbeliever. We meet him in the towns and suburbs of America. We meet him on the airplane as we fly to China for busi­ness. We meet him at the construction site. We meet him at the office. We meet him in the university class­room. Sometimes the man whom we encounter claims to be a Christian. But sometimes he makes known that he is an unbeliever. He speaks of his Buddhist or Hindu faith. He talks about going to the synagogue or mosque for worship. He tells you frankly that he does not be­lieve in God, or that he does not know if there is a God. Maybe it becomes clear that he worships the gods of the stadium or theater or casino. To cope with the struggles of life, he turns to the bottle to dull the pain or to the Internet for sexual gratification. He puts all the hope of his soul in the doctor and in modern medical technolo­gy to save him from his sickness.

But one thing we always know is that he has done something with God. When we encounter the unbeliever, we know that we are never facing an empty vessel just waiting to be filled with the treasures of the gos­pel. We are facing a man who knows something about God and has done something with God. Everyone in the world knows something about God. For accord­ing to the apostle Paul, God reveals the invisible things of Himself clearly through the creation of the world so that man understands something about Him through the things that are made, even His eternal power and Godhead (Rom. 1:20). Everyone also has a conscience that bears witness, and thoughts that accuse or excuse one another, for the work of the law of God is written on his heart (2:15). Indeed, every man after the Fall has “the glimmerings of natural light, whereby he retains some knowledge of God. and of the differences be­tween good and evil.” (Canons, III/IV, 4).

We know, too, that any man or woman whom we encounter has done something with the work of the law that God has written on the heart. What have you done, man of the world, with the testimony of the law in your heart that you ought to worship the one true God alone and not invent your own gods? What have you done with your conscience that bears witness in your soul that you must not kill or steal or commit adultery? Have you, like Adam and Eve, sewed together the fig leaves of false religion and vain works and tried to cover your nakedness? Have you tried to hide from God by accusing others and making excuses for your actions? What have you done with God, O man?

Elenctics is an aspect of the mission and witness of the church to that man of the world who has done something with God.

Elenctics presupposes what Paul teaches in Romans 1:18-32, that the man of the world is not waiting and longing to be filled with the riches of salvation in Christ alone, of which we are the witnesses. But the man of the world is ungodly and holds the truth in unrighteous­ness. What has he done with God? He has done the very same thing I would do and the very same thing I do by nature. He has suppressed the knowledge of God deep in his heart. He has pushed it down because he does not want it. He has even tried to deny that it is there at all. He knows God, but he does not glorify Him as God, neither is he thankful. But he has become vain in his imagination and his foolish heart is darkened. He professes himself to be wise with his religion and philosophy, but he has become a fool. He has changed the glory of the incorruptible God into an image made like to corruptible man, birds, beasts, and creeping things that he sees in the creation around him. He has changed the truth of God into a lie and worshiped and served the creature more than the Creator, who is blessed forever.

The man of the world is certainly not seeking the pearl of great price, but is lost in the darkness of his sin and depravity. He is not hungering and thirsting after righteousness, but looking for a way to enjoy his sin and escape the punishment. The spark of natural light that he still possesses is not a grace of God common to all men, by the good use of which he can gain a greater, namely, evangelical or saving grace and salvation itself (Canons, III/IV, B, 5). For “so far is this light of nature from being sufficient to bring him to a saving knowl­edge of God and to true conversion, that he is incapable of using it aright even in things natural and civil” (III/ IV, 4).

Therefore, the man of the world has invented count­less false religions in his quest for happiness and securi­ty apart from the one true God. There is the Buddhist religion of millions in China and Southeast Asia. There are the masses of Hinduism on the Indian subcontinent and Shintoism in the islands of Japan. In the Middle

East, North Africa, and Indonesia you find hordes fol­lowing the crescent of Islam. Farther south in Africa, there are the traditional animistic religions of that conti­nent. Moreover, the believer will encounter all of these and others anywhere in the world, including America and Europe.

But there are millions of others in the world who consider themselves to be within the fold of Christian­ity. The believer will encounter Roman Catholics in the world, especially here in the Philippines. I encoun­ter a Roman Catholic every time I pay the rent for our house. Our landlady, who lives next door, is a devout Roman Catholic. Last time I talked to her (she is an old widow woman), she told me that she prays the rosary every night. She said that we Protestants do not love Mary, but she prays to Momma Mary, because Mary will convince her son Jesus to hear her prayers, and Je­sus will persuade God. We encountered a throng of Roman Catholics in one of the famous churches here in Manila a few months ago. We saw a multitude of people crowded into that building eagerly pressing near to the priest who was tossing holy water on them. We saw a man with a terrible infirmity on his face sitting in the cathedral, presumably hoping for a miracle. We saw many people touching and praying to images of Jesus and Mary. What are they all doing with God?! They know something about God. They know more than most because of the vestiges of the truth, like the deity of Christ, still taught by Rome. But what are they doing with God? They are changing the glory of the incorruptible God into an image and worshiping that image.

Then there are the growing numbers in America and Europe who say that there is no God, or that they can­not be sure. They say matter has always existed. They say the universe is billions of years old. They say it be­gan by a “big bang” and evolved over billions of years to its present state. They say life just began by itself. They say man is god. We must put our trust in man to save us from all our troubles. We may determine for ourselves what is right and wrong. We may each choose for ourselves how we want to seek happiness in this life. We must not condemn homosexuality or transgenderism as sin, but must affirm and celebrate all lifestyles. What are they doing with God? They are holding the truth in unrighteousness, for they know that there is a God, but they do not want to believe in Him or obey Him. Therefore, God is giving them up unto vile affec­tions, for their women change the natural use into that which is against nature, and the men leave the natural use of the women and burn in their lust one toward an­other (Rom. 1:26-27).

He who engages in elenctics acknowledges that the world is the stronghold of Satan and the enemy of the church from which he must keep himself unspotted. But he also knows that the world is the field where the seed of the gospel must be cast (Matt. 13:38). The world is a great sea, with many kinds of fish, into which the net of the Word of God must be thrown for the gathering of the elect in all nations (Matt. 13:47).

He knows that God is giving over the ungodly to their vile affections. But he also knows that God will save some of them, as He did through the apostle Paul. For Paul wrote to the Corinthians that homosexuals will not inherit the kingdom of God, “And such were some of you: but ye are washed, but ye are sanctified, but ye are justified in the name of the Lord Jesus, and by the Spirit of our God” (I Cor. 6:9-11).

With that knowledge and missionary motive, the be­liever engages in elenctics, one of the essential elements of all true missions and witnessing.

And what exactly is elenctics? We will return to that next time. 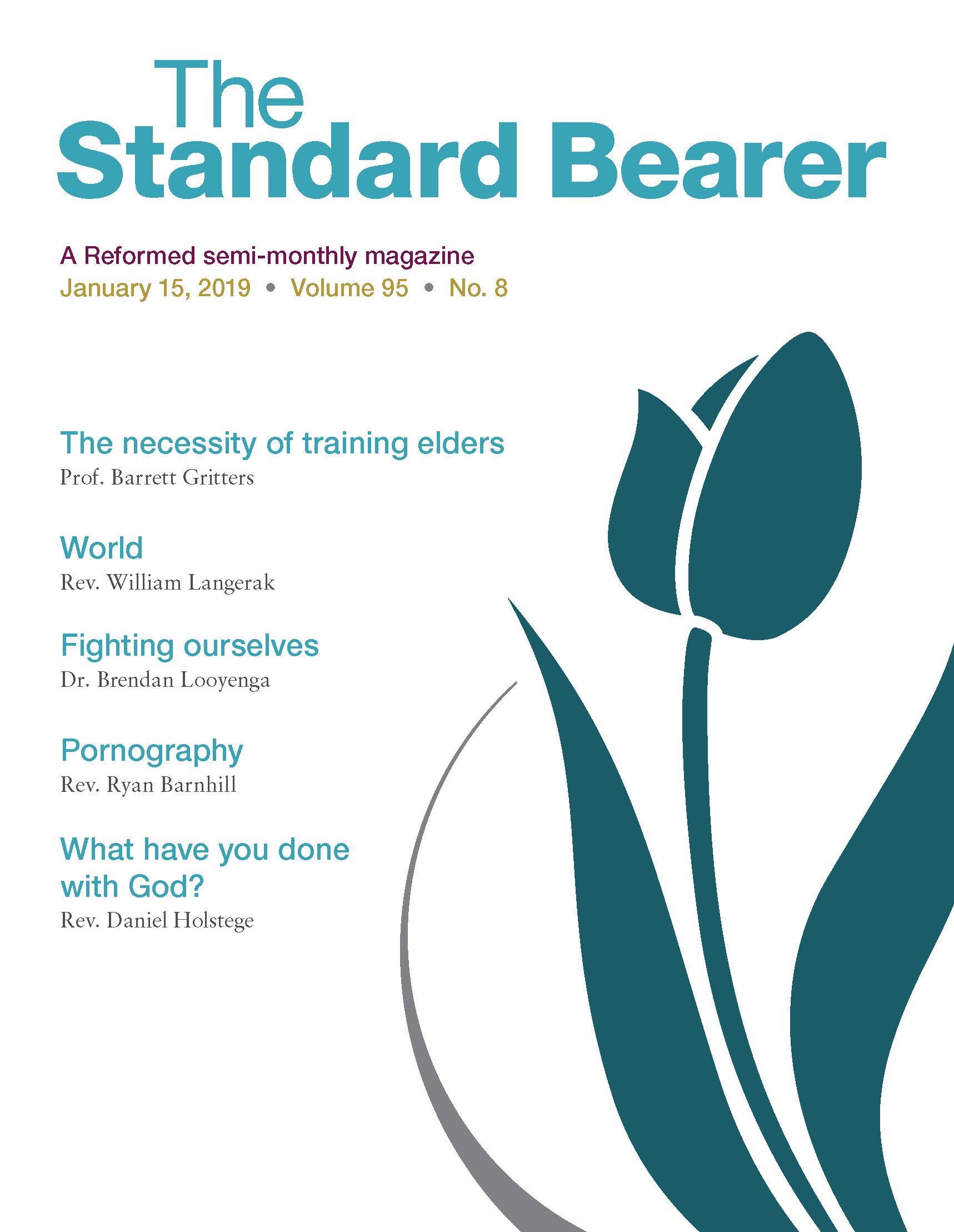