Rev. Spronk is pastor of the Peace Protestant Reformed Church in Lansing, Illinois.

Q. 80 What difference is there between the Lord’s Supper and the popish mass?

A. The Lord’s Supper testifies to us that we have a full pardon of all sin by the only sacrifice of Jesus Christ, which He Himself has once accomplished on the cross; and that we by the Holy Ghost are ingrafted into Christ, who according to His human nature is now not on earth, but in heaven at the right hand of God His Father, and will there be worshiped by us—but the mass teaches that the living and dead have not the pardon of sins through the sufferings of Christ, unless Christ is also daily offered for them by the priests; and further, that Christ is bodily under the form of bread and wine, and therefore is to be worshiped in them; so that the mass, at bottom, is nothing else than a denial of the one sacrifice and sufferings of Jesus Christ, and an accursed idolatry.

Is the CRC right? Should the PRC also compromise and seek unity with Rome? Or should the PRC continue to confess Q/A 80, sharply condemning the errors of Rome, and demand that Rome repent and change its confession? The actions of the CRC raise these important questions. Therefore, we want to know—what has the CRC done with Q/A 80?

In 2004 the synod of the CRC determined that changes must be made to Q/A 80, when it voted in favor of this recommendation: “That synod declare Q. and A. 80 can no longer be held in its current form as part of our confession given our study of official Roman Catholic teaching and extensive dialogue with official representatives of the Roman Catholic Church.”

The original, unacceptable form of the question and answer was replaced by a new form adopted by the CRC in 2006. In its new form the answer to question 80 appears with five paragraphs. The first two paragraphs set forth the Reformed view of the LS. The last three paragraphs explain the Roman Catholic view of the mass and condemn the mass as “a denial of the one sacrifice and suffering of Jesus Christ and a condemnable idolatry.” These last three paragraphs are in brackets, and a footnote is included explaining that the brackets “indicate that [the last three paragraphs] do not accurately reflect the official teaching and practice of today’s Roman Catholic Church and are no longer binding on members of the CRC.” So in the CRC the part of the answer to Q. 80 that explains the Reformed view of the Lord’s Supper is still binding, but the portion of the answer that explains and condemns the Roman Catholic mass is no longer binding.

Not only did synod declare the last part of the answer to be no longer binding for members of the CRC, but it declared also that it is sinful to confess this section of the answer. In 2008 this statement was officially adopted: “In sum, it would be inappropriate for the CRC to continue, by its confession of Q. and A. 80 of the Heidelberg Catechism, to suggest that it accurately describes or fairly condemns either official Roman Catholic teaching or the practices that are in accordance with it.” Presumably, that which is inappropriate to confess is sinful to confess. Though it is not stated in so many words, confessing the original form of Q/A 80 is a violation of the 9th commandment, according to the official decision of the CRC; confessing Q/A 80 is the sin of bearing false witness about the teachings of Rome.

How did the CRC come to the shocking conclusion that Q/A 80 inaccurately described and condemned the Roman Catholic mass? It listened to Rome. The decision was made, as noted above, after “extensive dialogue with official representatives of the Roman Catholic Church.”

The report does point out some differences between the Reformed view of the Lord’s Supper and the Roman Catholic view of the mass, but on the two crucial points, whether the mass is a denial of Jesus’ one sacrifice on the cross and whether it is nothing but a condemnable idolatry, Rome was allowed to have the last word. This is how the discussion concerning the charge that the mass is a denial of the one sacrifice of Christ on the cross took place:

Rome’s response was allowed to stand unchallenged. Nowhere in the documents is there any mention of the IRC pointing out the passages in Hebrews that speak of Jesus’ sacrifice as the only sacrifice that pays for sins. Nowhere is it pointed out that these passages in Hebrews mean that any other sacrifice that “mediates forgiveness” is a denial of the one sacrifice of Jesus Christ. Instead the CRC concluded that, though Rome is in error for teaching that the mass is a sacrifice, this error should not be condemned as a denial of the one sacrifice of Christ. For, the CRC says, the mass does not obliterate the sufficiency of Christ’s sacrifice but only obscures it. In the CRC’s opinion, obscuring the sufficiency of the cross is not a denial of the sufficiency of the cross. In the end, Rome’s position is allowed to stand unchallenged and uncondemned.

The second important issue is Q/A 80’s condemnation of the mass as idolatry. Rome’s doctrine of transubstantiation teaches that the consecrated bread and wine become the physical body and blood of Jesus. Since Jesus is to be worshiped, Rome teaches its followers to worship the bread and the wine. This worship of bread and wine is judged by Q/A 80 to be a condemnable idolatry. In their discussions on this issue, the Roman Catholic officials admitted that the “sacrament” is to be worshiped, but they refused to say that the “elements” of bread and wine are worshiped, because they are no more bread and wine but the very body and blood of Jesus. So the Roman Catholics argued, to no one’s surprise, that they were not guilty of idolatry because they worship Christ not bread and wine. The CRC accepted this and concluded that if Roman Catholics believe they are worshiping the ascended Jesus Christ, not bread and wine, when they bow down and pray to the sacrament, then they are not guilty of idolatry.

Once again Rome was left unchallenged. None of the powerful arguments raised against Rome’s position since the time of Luther and Calvin were addressed with the Romish officials. Just to point out one example, nowhere does the IRC deal with the argument that Rome’s attempt to worship Christ through the bread and wine is no different from Israel’s attempt to worship God through the golden calves made by Aaron and Jeroboam, and since Scripture condemns the worship of these golden calves as idolatry, it also condemns the worship of the bread and wine as idolatry. This and the other powerful arguments were not refuted in the time of Luther and Calvin. They are still unrefuted. Until they are refuted the charge that the mass is a condemnable idolatry stands. The CRC’s theologians on the IRC and at synod knew about these arguments. They chose to let them go and let Rome be unchallenged.

Though the documents explaining what the CRC has done with Q/A 80 are very lengthy, a brief summary is this: the CRC asked Rome if Q/A 80 is accurate, Rome said it is not, and the CRC simply acquiesced.

By giving ear to Rome the IRC and the synod of the CRC simply reflected a pattern of seeking out fellowship with Rome established already by some of its members. Synod’s decision to change Q/A 80 was initiated by an overture originating from First CRC of Detroit. First, the CRC sought to change Q/A 80 “due to our increasing association with our brothers and sisters of the Roman Catholic Church.” It is impossible to prove that throughout the CRC the members are seeking more fellowship with Roman Catholics. Yet, the desire to change the teaching of the catechism concerning Roman Catholic errors arose out of an atmosphere in which there was already a warm relationship with Roman Catholics. This illustrates the point that doctrine and life go hand and hand, and in this case the life of the members of at least one CRC congregation increasingly included Roman Catholics and led to a change in one of the Reformed confessions—a change that may lead to closer ecclesiastical ties between the Christian Reformed Church and the Roman Catholic Church.

Lyle Bierma, professor at Calvin Seminary and one of the members of the IRC, saw closer ecclesiastical fellowship as one of the possible results of the CRC’s dialogue with Roman Catholics concerning Q/A 80. Bierma wondered in writing where this would lead in the future. “To certificates of baptism that officially recognize a common baptism in both traditions? To some movement toward participation in each other’s celebration of the eucharist?” The CRC’s openness to moving ever closer to Rome was demonstrated this summer when Rev. Jerry Dykstra (as reported on the CRC’s website) attended an ecumenical prayer meeting led by Pope Benedict XVI, “representing the Christian Reformed Church in North America [emphasis mine].” It does not seem too farfetched to see the decision to elide Q/A 80’s condemnation of the mass as providing the opening needed for the CRC to send representatives to an official Roman Catholic Function.

By changing Q/A 80 so that it no longer condemns the mass, the CRC is patching up its controversy with Rome by moving towards Rome. Sadly, the CRC has done this without sufficiently proving that Q/A 80 is inaccurate.

Q/A 80 still stands. The Reformed confession should not be changed. Rather, it is Rome that needs to repent of its sin of denying Christ’s one sacrifice and of worshiping an idol. Also, Rome, not Reformed churches, ought to be embarrassed by and ought to change the sharp language found in its confession. Perhaps the CRC will remember as she moves towards Rome that she is moving toward the church that has also used strong language to condemn Reformed believers. Maybe the CRC, though she no longer condemns Rome’s view of the mass, will remember that Rome, by its Council of Trent and still to this day, damns to hell everyone who confesses the Reformed view of the LS. Maybe the CRC will convince Rome to change.

To date, they have not. Q/A 80 is accurate. It need not be changed. 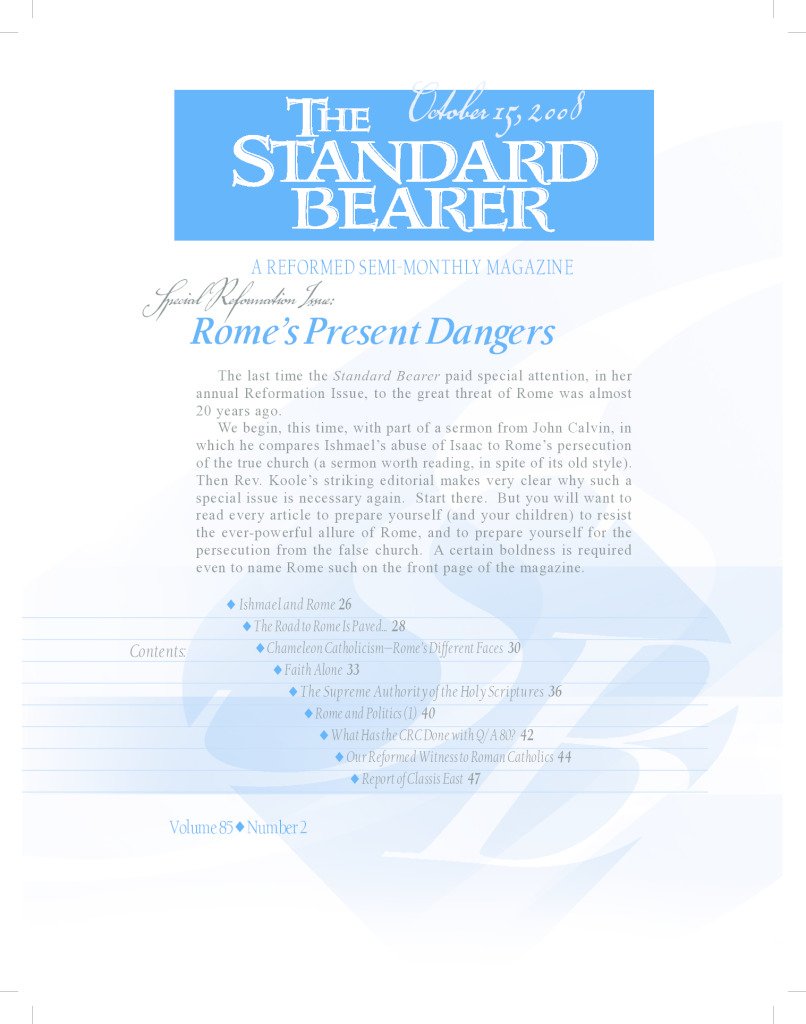