[In 1942 the General Assembly of the Presbyterian Church of the United States of America (North) added two chapters at this point in the Confession of Faith: Of the Holy Spirit and Of the Gospel. It is said that the chapter on the Holy Spirit merely gathers together the teachings on that subject scattered throughout the Confession and Catechism. The chapter on the Gospel, however, does more than that. James B. Green says, “The chapter on the Gospel is meant to make explicit what is only implicit in the Westminster Standards. The Westminster Assembly emphasized the love of God for the elect. This chapter was not designed to correct that emphasis but to supplement it. The fact of the love of God for all mankind underlies the whole statement of the Calvinistic creed. The revisors thought that this general love of God and His call to all men should have clear recognition” (A Harmony of the Westminster Presbyterian Standards, p. 71). At this point let it suffice us to say that we do not agree with Green’s evaluation of what is implicit in the Confession. In this rubric we will treat the work of the Westminster Assembly and not that of any revisors.]

This ninth chapter is an answer to an oft raised objection against the main doctrine of the Reformed Faith: the sovereignty of God. The charge is brought against Divine sovereignty that it destroys all human responsibility. It is this evil and most false charge which the Westminster Assembly is treating in this chapter. Most often in our day the subject of the freedom of the will is considered from a moral-ethical viewpoint, viz., that man’s will is bound in sin to serve evil or in Christ is freed from this bondage of sin unto the service of the living God (Romans 6). This is the perspective of Martin Luther’s well-known “The Bondage of the Will.”

However, the Confession is not taking that perspective. Rather it is considering whether or not the sovereignty of God destroys and cancels out the will of man so that he is no different from the rock or the tree. And the position of the Confession is that man does have a will which he can exercise, and hence he is responsible.

1. God hath endued the will of man that natural liberty, that it is neither forced, nor by any absolute necessity of nature determined, to good or evil.¹

Freedom of the will is set up by the Confession as the opposite of force and coerced. The Confession states that man is not forced by some external force greater than himself to will something he does not want to will. Man is free to will what he wants to will. Also man is free to do what he wills within the limitations of his, ability. Man is created with the power of willing and of willing in the way the man himself desires at the time. This is the “natural” liberty of which the Confession speaks.

Man’s will is not such that he wills one thing, but convulsively does another thing against his will. Man’s will is conditioned by the moral character of the man, out of which the willing comes. The acts of the will represent and reveal the character of the person, so that Jesus can say, “The tree is known by his fruit” (Matt. 12:33). If the soul is corrupt, then it will only will to do evil. Although morally and ethically such a will does not have the ability to escape the bonds of sin, nevertheless it has liberty to will all the evil and every kind of evil he wishes. No one forces him in any evil act. Each he wills of his own will.

The Confession now considers this liberty of man’s will in its four states: innocence, total depravity, grace, and glory. In each man is a free, responsible agent choosing or refusing as he wills.

2. Man, in his state of innocency, had freedom and power to will and to do that which is good and well-pleasing to God;¹ but yet mutably, so that he might fall from it.²

God created man good and in the state of innocence. The natural liberty of man’s will was such that he chose that which was good and pleasing in God’s sight. Free to do his desire, he desired to do that which was morally right.

However, man could change; he could lose the ability(not, liberty) to choose the good. Man did fall from the state of innocence by choosing to do that which was not pleasing in God’s sight, that which is contrary to God’s command.

3. Man, by his fall into a state of sin, hath wholly lost all ability of will to any spiritual good accompanying salvation;¹ so as a natural man, being altogether averse from that good,² and dead in sin,³ is not able, by his own strength, to convert himself, or to prepare himself thereunto.

By his fall into sin and guilt before the righteous God, man lost the ability to do good. One sin destroyed. the pure source out of which the ability to will good came. Before the fall he was able to will and to do either good or evil. After the fall he is able to will and to do only evil, for “every imagination of the thoughts of his heart was only evil continually.” “There is none that doeth good, no, not one.” “‘Can the Ethiopian change his skin, or the leopard his spots? then may ye also do good, that are accustomed to do evil” (Genesis 6:5; Romans 3:12; Jeremiah. 13:23). Being “utterly indisposed, disabled, and made opposite to all good, and wholly inclined to all evil” (Confession IV – 4) man in sin cannot convert himself or even prepare himself for conversion, i.e., he cannot even will his own conversion. This is a death blow to the position that the natural man has the ability to will good, even and especially his own salvation.

Though morally bankrupt and bound only to evil, man’s will is still free to desire as he wills to do so, namely he is free to will all the evil and every evil he wishes. As A.A. Hodge says in his commentary on the Confession, “The moral condition of the heart determines the act of the will, but the act of the will cannot change the moral condition of the heart.”

4. When God converts a sinner, and translates him into the state of grace, he freeth him from his natural bondage under sin,¹ and by His grace alone enables him freely to will and to do that which is spiritually good;² yet so as that, by reason of his remaining corruption, he doth not perfectly nor only will that which is good, but also wills that which is evil.³

Only regeneration frees the will of man morally. The power of grace is that it liberates man’s will from the bondage of willing only evil. Grace gives man’s will the ability to will the spiritually good.

Such a man is still a free, responsible agent, willing what he desires to will. The difference between the unregenerate and the regenerate man is one of ability, not of liberty.

Unlike Adam, the man on whom grace has come cannot will the good perfectly. This is because sin is still present with him. The Christian wills both good and evil, and the good he wills he does not will perfectly. Nevertheless, natural liberty of man’s will remains in the state of grace: he wills what he desires to will. Sometimes that will is influenced by his regenerated heart and sometimes by the corrupt nature which he still possesses.

5. The will of man is made perfectly and immutably free to do good alone in the state of glory.¹

Then too, man’s will has the natural freedom to will what it desires to will.

This is the answer to the charge that God’s sovereignty destroys man’s responsibility making him only a robot. No, man is not as a robot, tree, or stone. He is an actively willing creature, willing what he wants to will. Hence he is always responsible for his willing and the actions which flow from his will. 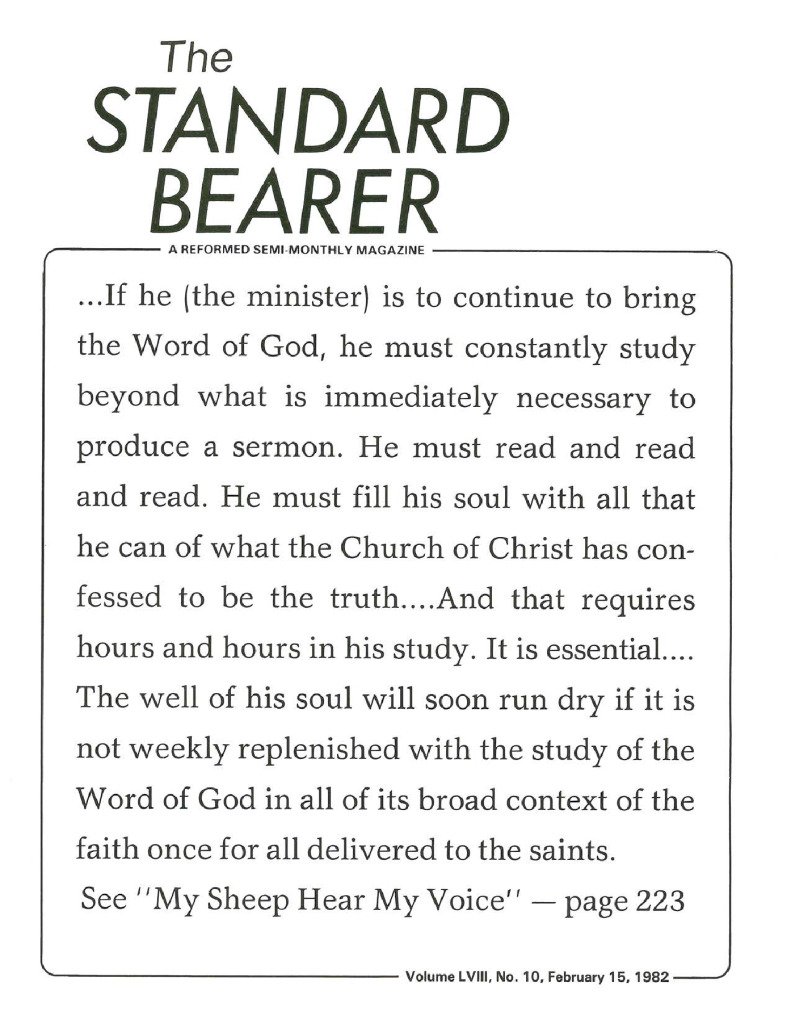