The Standard Bearer received some material from our newly organized congregation in Edmonton, Alberta, Canada which includes a program of the organizational meeting held September 25, 1975, a letter from the Consistory of Edmonton addressed to all the Protestant Reformed Churches in Classis West (but which was also distributed in some of our congregations in Classis East,) and a bulletin of the first Sunday worship services.

The Standard Bearer wishes to make recognition of this great event in the lives of God’s people in Edmonton and in the history of our Protestant Reformed Churches. After all, with the organization of this new congregation, our Churches have “gone international”; and our Churches now extend from the Atlantic to the Pacific and from the northern parts of Canada to the balmy tropical sunshine of Southern California.

The organizational meeting was held under the supervision of the Consistory of our Lynden congregation and was conducted by Rev. G. Lanting and Rev. B. Woudenberg. On the inside of the program the following is found:

The origin of the First Protestant Reformed Church at Edmonton, Alberta, Canada, is to be found in a Bible study class which met for about two years under the instruction of Rev. Bernard Woudenberg of Lynden, Washington, U.S.A.

It was in the spring of 1973 that a number of people in Edmonton became deeply concerned with the growing liberalism of their church life. At that time, Mr. and Mrs. F. Tolsma came to visit in Lynden, and to meet with Rev. Woudenberg who offered to come to Edmonton and do what he could to help them. This he did, and the result was the organization of a regular Bible study class meeting every two weeks for the following two years. Each time Rev. Woudenberg would fly up by plane from Lynden and lead the class, which studied in detail the five points of Calvinism and the Belgic Confession of faith.

It was during the summer of 1975, when Rev. Woudenberg was unable to meet for about two months, that the members of the class came to the conclusion that they should seek a more stable form of organization as a congregation among the Protestant Reformed Churches in America. When Rev. Woudenberg returned, they consulted with him, and afterward with a committee from his consistory as well as one from the Mission Committee of the Protestant Reformed Churches. It was their advice that the group of believers should send a letter of request to Classis West of their denomination to request such organization. This was done on September 3, 1975, and the Classis authorized them to be organized under the direction of the consistory of Lynden Protestant Reformed Church together with Rev. George Laming of Loveland, Colorado. The meeting has been set for this evening, September 25, 1975, in the Crestwood Presbyterian Church at Edmonton.

It is with thankfulness to God that we would express our gratitude for the two wonderful years of study and fellowship in the Word under the leadership of Rev. B. Woudenberg, and our prayer is that having begun in this way of truth, the Ring of the Church will keep us and our children faithful unto it for many years until He comes to receive us unto Himself.

From the bulletin enclosed we learn that Rev. Laming began immediately to preach on the Heidelberg Catechism; that Catechism classes were organized, and that the Bi-weekly Study Group was continued.

Reading the material enclosed, one cannot help but be impressed that this small group of fourteen confessing members and eighteen children began their history as a Protestant Reformed Church with great joy in their hearts and with abundant gratitude to our covenant God.

And so we, the Staff of the Standard Bearer extend to you of our newest congregation a heartiest welcome into our fellowship. You so often express in your letters your desire for the prayers of your sister congregations; be assured of these prayers, and may the God of all grace, and our Lord Jesus Christ, through the operation of His Holy Spirit lead you into the riches of the truth of the gospel and join you with us and with all God’s people in the bonds of love and truth. 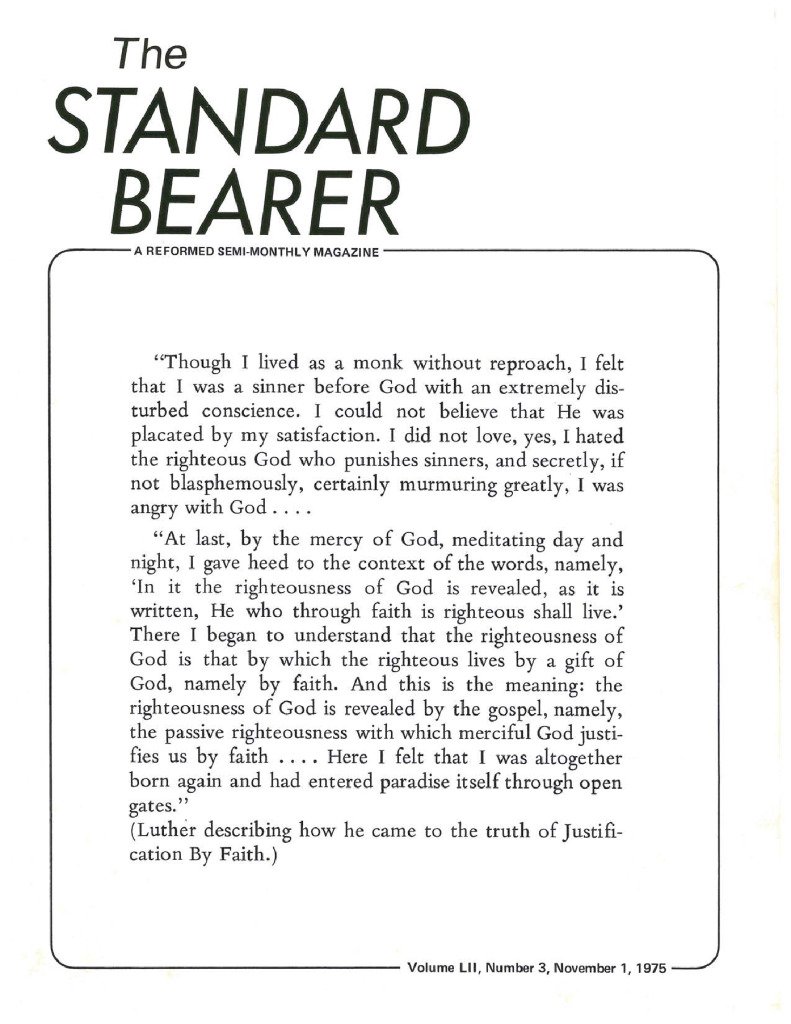