Rev. Key is pastor of the Protestant Reformed Church of Loveland, Colorado. He and his wife will be married 40 years in November, D.V.

A wedding reception is a joyful celebration of the union of a man and a woman as husband and wife. It is a celebration in which family, friends, and acquaintances are given opportunity to rejoice with them that rejoice (Rom. 12:15).

That such marriage celebrations have a place in the life of the Christian is evident from the references in the Bible to various wedding feasts, including the one in Cana of Galilee attended by our Lord Himself and at which He performed the “beginning of miracles” that marked His earthly ministry.

The “Form for the Confirmation of Marriage Before the Church,” which itself or a variation thereof is generally used in the weddings conducted by Protestant Reformed ministers, refers to Christ’s attendance, gifts, and miracles at the wedding in Cana (John 2:1-13) as evidence that the Lord Himself highly honored marriage. That would also include the celebration of that union according to the custom in the church of His day.

J.C. Ryle has some excellent commentary concerning the wedding in Cana, commentary worth our consideration and which we make no attempt to improve upon.

After making some noteworthy observations about our Lord’s attendance at that wedding feast in Cana and pointing out the biblical significance of marriage, and that the joy of marriage is dependent upon Christ’s blessing and presence, Ryle goes on to write the following:

We learn, secondly, from these verses, that there are times when it is lawful to be merry and rejoice. Our Lord Himself sanctioned a wedding-feast by His own presence. He did not refuse to be a guest at “a marriage in Cana of Galilee.” “A feast,” it is written, “is made for laughter, and wine maketh merry” (Eccl. 10:19). Our Lord, in the passage before us, countenances both the feast and the use of wine.

True religion was never meant to make men melancholy. On the contrary, it was intended to increase real joy and happiness among men. The servant of Christ unquestionably ought to have nothing to do with races, balls, theatres, and such-like amusements, which tend to frivolity and dissipation, if not to sin. But he has no right to hand over innocent recreations and family gatherings to the devil and the world. The Christian who withdraws entirely from the society of his fellow-men, and walks the earth with a face as melancholy as if he was always attending a funeral, does injury to the cause of the Gospel. A cheerful, kindly spirit is a great recommendation to a believer. It is a positive misfortune to Christianity when a Christian cannot smile. A merry heart, and a readiness to take part in all innocent mirth, are gifts of inestimable value. They go far to soften prejudices, to take up stumbling-blocks out of the way, and to make way for Christ and the Gospel.1

Those celebration may take many different forms.

Even as wedding customs themselves vary considerably in different cultures and at different times, so it is with what we refer to as wedding receptions.

When we consider the parable of Matthew 25:1-13, for example, it is important to our interpretation of that parable that we understand the wedding customs of that day. After all, they differ tremendously from our own wedding customs in North American in the twenty-first century. We also must remember that wedding celebrations or wedding receptions are and have been conducted very differently in different places and at different times.

Early weddings in America were generally private affairs, held at the home of the parents of the bride or groom. The wedding celebrations, therefore, were intimate family gatherings.

In the early nineteenth century, weddings especially among the upper class had begun to evolve a bit more into the recognizably modern American wedding (complete with a lavish cake, dinner reception, and toast to the bride and groom), but they remained quite small and private.

In time, however, and with the increased prosperity of American culture, weddings and their celebrations became more and more elaborate.

In the past century weddings that would have been held in private homes were now being moved to churches, where more square footage allowed for a larger number of guests and seemingly required a greater show. A bride who may have sewn her own wedding dress or simply used a dress she already owned was now likely to hire a dressmaker or even order a ready‑to‑wear wedding gown. Cakes and flower arrangements that would have been prepared at home were now being contracted out to bakers and florists, and the “wedding industry” began to grow.

Various factors, therefore, come into consideration when we plan not just weddings, but wedding receptions.

But no matter the differences in customs, we must remember as Christians that wedding receptions are to be sanctified celebrations.

We stand reminded, therefore, that the call to holiness applies also to our Christian celebrations.

In this connection, those of us who have been any number of years in the ministry have seen some receptions that are not what they ought to be. There is no place in a Christian celebration of marriage for off-color jokes with sexual innuendo, a making fun of the calling of a husband or wife, or comments that would ridicule the relationships of the newly married couple to each other or to their new fathers-in-law or mothers-in-law. There also is no place in a Christian wedding celebration for a dance, as has become very common today even within the communities of so-called Reformed Christians. The kind of public dancing common in our modern culture expresses the pervasive influence of an improper view of sexuality that violates the seventh commandment. We who hold to the Heidelberg Catechism’s exposition of the seventh commandment have to live our confession. In the seventh commandment God forbids “all unchaste actions, gestures, words, thoughts, desires, and whatever can entice men thereto.” (And when you read the Heidelberg Catechism, do not overlook the Scripture references that are the basis for that instruction.)

The relationship of marriage as ordained by God and given to some within His church is so beautiful, and carries such glorious significance as the reflection of Christ and His bride, that it is to be held in highest esteem always. We may not succumb to nor contribute to the world’s profaning of that relationship. Celebrate marriage properly.

While that celebration of family life does not exclude the possibility of humorous expressions of our love and life’s experiences, we have to remember that remarks made that reflect upon marriage are to be an affirmation of the high calling that God gives us in marriage, even as was set forth in the marriage ceremony itself.

Another matter that we have to consider in our wedding receptions is the matter of stewardship. Many weddings have become elaborate and very costly events. That those who have the financial means host such celebrations is not wrong. But for us who do not have such means, it is wrong if we think that we have to host wedding receptions that rival the costly events put on by others. We have to remember our calling to live within our means. We have the utmost respect for those who have hosted wedding receptions that were limited in the number of guests and that provided a very simple luncheon, often prepared by the family, because they recognized the importance of not spending what they did not have. We are called to be faithful stewards in every aspect of life. The same applies when it comes to wedding receptions.

Finally, let us also remember that we participate in the weddings and receptions that we attend. Our attendance is a testimony that we know the union to be lawful, that is, lawful according to the divine ordinance of marriage—one man to one woman until death parts them. If we are to be faithful to God, then, we do not testify of our approval to a couple entering an adulterous relationship by the remarriage of a divorced party whose spouse is still living.

By our attendance at a wedding, we testify that we give that union our blessing, and are ready to help that couple, as much as we are able, to see that their union is pleasing in the sight of God.

But that testimony given by our attendance at a wed ding carries over as well to the wedding reception. While we have no direct say in what goes on at most weddings or receptions that we attend, we must not forget our calling as brothers and sisters in Christ to encourage one another in godliness. There is a corporate responsibility involved, if wedding receptions are not sanctified celebrations.

The subject no doubt is a difficult and delicate one. On no point of Christian practice is it so hard to hit the mean between that which is lawful and that which is unlawful, between that which is right and that which is wrong. It is very hard indeed to be both merry and wise. High spirits soon degenerate into levity. Acceptance of many invitations to feasts soon leads to waste of time, and begets leanness of soul. Frequent eating and drinking at other men’s tables, soon lowers a Christian’s tone of religion. Going often into company is a heavy strain on spirituality of heart. Here, if anywhere, God’s children have need to be on their guard. Each must know his own strength and natural temperament, and act accordingly. One believer can go without risk where another cannot. Happy is he who can use his Christian liberty without abusing it! It is possible to be sorely wounded in soul at marriage feasts and the tables of friends.

One golden rule on the subject may be laid down, the use of which will save us much trouble. Let us take care that we always go to feasts in the spirit of our divine Master, and that we never go where He would not have gone. Like Him, let us endeavour to be always “about our Father’s business” (Luke 2:49). Like Him, let us willingly promote joy and gladness, but let us strive that it may be sinless joy, if not joy in the Lord. Let us endeavour to bring the salt of grace into every company, and to drop the word in season in every ear we address. Much good may be done in society by giving a healthy tone to conversation. Let us never be ashamed to show our colours, and to make men see whose we are and whom we serve. We may well say, “Who is sufficient for these things?” But if Christ went to a marriage feast in Cana there is surely something that Christians can do on similar occasions. Let them only remember that if they go where their Master went, they must go in their Master’s spirit. 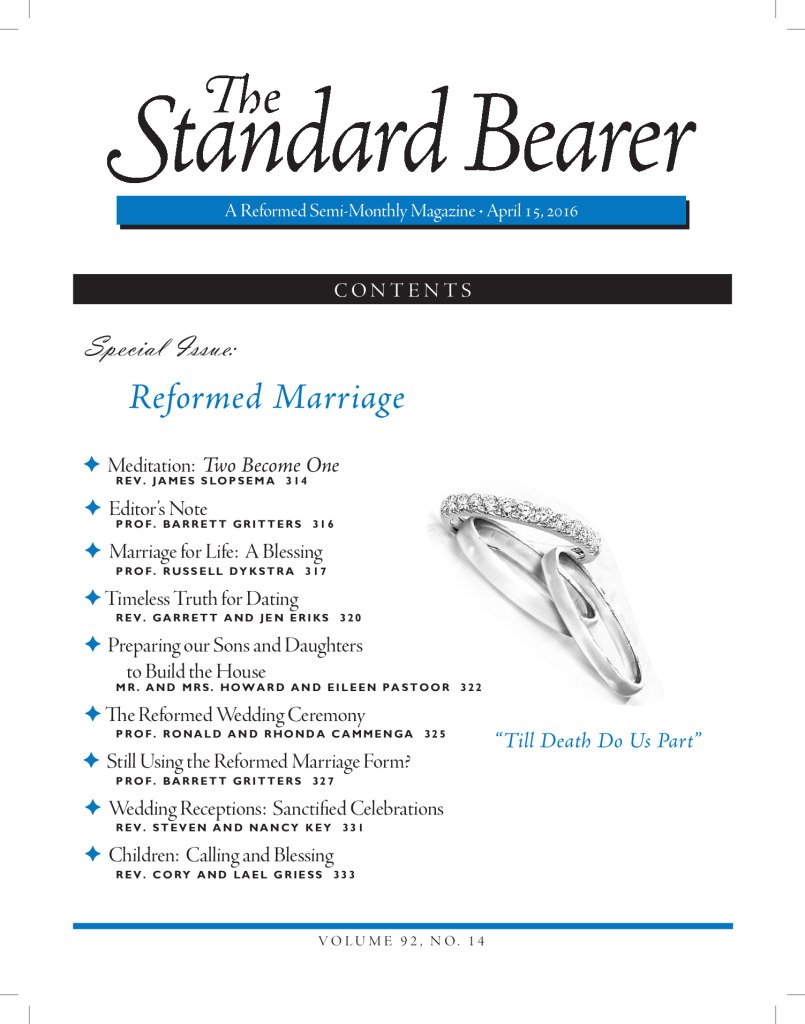