These words—“we unhesitatingly recommend”—could well be hung on the wall of all consistory rooms of Reformed congregations. In large enough print, that every time the council members walk into the room they see and are aware of them.

These words are the heart and center of the “Letter of Recommendation” that a council must give to their minister if he leaves for another church. The elders and deacons must declare: “We unhesitatingly recommend our minister to you.”

One of the more important (even if infrequent) decisions that a consistory must make is the decision to write this recommendation. A minister may not leave a church, and a consistory may not send him, without this letter.

In fact, whether elders and deacons are aware of it or not, every church—Redlands, Lynden, Lacombe—has sent this “Letter of Recommendation” when their minister took a call to go to a different church. They “unhesitatingly recommended” their minister to the church he went to.

Where is this letter?

I would guess, though, that very few church members are even aware that such a letter exists. Even elders and deacons. This is a weakness that ought to be remedied. It is not too strong to say that the moment any minister begins a new pastorate, whether his first charge or fifth, consistory members must be thinking about this letter.

The letter is not found in the back of our Psalter. It is not included in the “Green Book,” that is, the Confessions and Church Order of the Protestant Reformed Churches which many young people carry to catechism. The only place it can be found is on page 142 of the green, plastic, spiral-bound book, which contains the Church Order and other lesser-known documents of the Protestant Reformed Churches.1 I include this document here in a shaded box (see next page).

When a minister receives and accepts a call to another congregation, the congregation may not receive him without a “Certificate of Dismissal and Testimonial” (the official title of the document we are talking about). Article 10 of the Church Order says, “until he has  presented a proper certificate of dismissal from the church and classis where he served.” Article 5 requires that the minister himself present “good ecclesiastical testimonials of doctrine and life” to classical and synodical representatives before he may be installed in the new congregation.

The process for a man receiving and accepting a call goes something like this: When a man receives a call to another congregation, and before he leaves, the consistory he presently serves must “consent” to his departure (see CO Article 10—also found at prca.org). An essential part of this consent is the consistory’s willingness and ability to give this recommendation, unhesitatingly. Whether they give consent early in the process when he first asks permission to consider the call, or late in the process after he makes his decision to leave, is a good question. At some point, though, according to Article 10, the minister himself must “ask of the consistory…to grant him” this “fitting testimonial bearing witness to faithful service performed.” The council must make a decision, by a formal motion recorded in the minutes, to grant it.

This is no formality. It should not be done in the consistory room quickly before the worship begins.

There are different ways a church and her minister may proceed when a call is received.

In some churches, immediately after the minister receives the call, he asks permission to “consider” it. During his consideration, the consistory gives him their input. Then, after he has considered the call, if he believes he must go, he informs the consistory that God has led him to go. The consistory has no more say in the matter.

If this is the consistory’s practice, they must give the permission to “consider” with their eyes wide open to this fact: this decision is, in fact, a commitment to sign the letter of recommendation. They have decided that they are able to recommend their minister to the next congregation without hesitation.

In other churches, the consistory’s practice is to make two distinct decisions—first, permission to “consider,” followed later by another permission to “accept.” With this practice, the latter decision must be made in full awareness of what they are doing. Consistories should examine their practice to make sure it serves them well.2

Either way, giving permission to a minister to leave is a weighty decision. The motion should be made carefully and the discussion should be open. The consistory sends him on with the highest testimony. We “unhesitatingly recommend.” May we say this?

The reason for the requirement

This “Certificate of Dismissal and Testimonial” has a history that reaches back centuries before the formation of the PRCA. It was formulated to protect churches. First, the church a man presently serves must have a voice in whether their pastor is still needed and ought not leave. The man’s current consistory must consent to him leaving. In the early days after the Reformation, some ministers were too inclined to abandon a church for ‘greener pastures.’

But the “Certificate” is intended also to protect calling churches that may naively be interested in a man who, before God, is unfit to serve them, a man who has been unfaithful to his ministerial calling.

Thus, a consistory may allow a minister to leave them to go elsewhere only when they are able to give him sterling credentials.

To put it frankly, no consistory may merely ‘put up with’ a man, secretly hoping that he will get a call to labor elsewhere, at which point they breathe a sigh of relief and send him on his way. Those who do so, sign the “Certificate” dishonestly.

What signing the “Certificate” does not mean

At this point, it is important to be very careful and clear.

The certificate does not require the sending consistory to say that their minister is one of the best preachers in the denomination. Signing it is not their testimony that the man has gifts of teaching catechism that they cannot imagine living without, or that his pastoral abilities are second to none.

Rather, the form says that the man has “labored faithfully and diligently.” That language is critical. Because of faithful and diligent labor they now “unhesitatingly recommend” him. He may well have been more difficult to listen to than other preachers, not as clear a catechism teacher as the neighboring minister, not as gifted at the graveside or in the hospital room as his colleague, even less ‘fun’ to visit with socially. Nevertheless, he labored “faithfully and diligently.”

With the gifts and abilities God gave him, he labored with might. He worked hard to make two edifying sermons every week. He was prepared for catechism lessons, and excited about them. When the sick or distressed called him, he visited them. He loved the people and taught them to love God. He submitted to, and did not resist, the consistory’s oversight and rule. And when, with greatest reluctance, the consistory may have seen fit to correct him, he received the correction with humility, admitted his faults, and quietly worked on remedying them.

That is, his labor among them was “faithful service.” In faithfulness to his calling from Jesus Christ, he was a servant to the people of God. This earthly shepherd represented properly the Chief Shepherd.

To that man the consistory gives the unhesitating recommendation. The testimony is not a testimony of gifts, therefore, but of service—diligent and faithful service.

What the “Certificate” does forbid

If a consistory cannot say that their pastor labored faithfully, they are forbidden to give the man permission to consider a call.

If they do, they themselves are unfaithful. Unfaithful, not only to the minister who needs their correction and of whom they now rid themselves, but especially to the next congregation to whom they faithlessly send the man. When they sign the “Certificate” they must be pretending not to know what they are signing.

But Caveat Emptor (“buyer beware”) is not on the certificate.

How thankful we can be for this “Certificate of Dismissal and Testimonial.” By it, we can live together in our denomination. When my own faithful pastor leaves our congregation some day and we must call another man, I can be confident that this next man comes with a rock-solid testimony of his former consistory: He has labored faithfully; we commend him to you without reservation.

What a beautiful (and safe!) way to live in the churches.

Hang it on the consistory wall?

This might be good for both the minister and the consistory.

It could be a sobering reminder to me, as a minister, when my sinful nature might tempt me to be unfaithful in any way. Some day the consistory must say about me, “We unhesitatingly recommend him.” If ever I was tempted to ignore, or even minimize in the slightest way a consistory’s rebuke or exhortation, the certificate would be a wake-up call to me. “Unhesitatingly recommend!”

Of course, a minister’s motivation to work faithfully and serve selflessly is gratitude. Always! Gratitude for his Savior’s faithfulness to him!

Yet warnings have their place. And this certificate is one powerful warning.

Also for the elders and deacons the phrase is a quiet reminder: “Brothers, we may never let things go in Christ’s church. We may never harbor the wish that if we put up with this for just a while longer, the man will be gone. In love for our neighbor congregations, love for our own congregation, and love for our minister(!), we need always to work together openly, faithfully. And if ever there is a time that we could not sign this certificate with honesty before God, we must take action.”

Even the members of the churches have a responsibility. Even though they do not sign the form, the elders and deacons sign the form for the congregation. Implied in the form is the entire congregation’s testimony of the man’s faithful service.

I am not suggesting that anyone rush off to the sign-maker to make such a plaque. Perhaps instead of a sign reading “unhesitatingly recommend…” this would be wiser: “Labor faithfully and diligently.” I like that.

God bless our ministers with faithfulness. God strengthen our councils for faithful rule. May He preserve us in neighborly love so that we do to the next congregation what we would have them do unto us.

1 The Church Order of the Protestant Reformed Churches, and Constitutions of Standing Synodical Committees, Rules and Regulations, By-laws, Forms, Declaration of Principles (2015). The lengthy title indicates its contents. This book is printed by the Synod of the PRCA, revised and updated every five years according to synodical regulation, and usually made available to officebearers in the PRCA. It can be purchased through the seminary. (This form may also be found on the PRCA website—prca.org—under “Resource Library”—“Forms/ Certificates.”—“Ministerial Certificate.”)

2 This second way of making two, separate decisions, is cumbersome and unnecessary, it seems to me. Does a man receive permission to consider, come to the conviction that it is the Lord’s will that he leave, and then find out that his consistory will not permit him to leave? Better to have this discussion early in the process, so that permission to “consider” is indeed permission to leave if the minister is convinced of it. 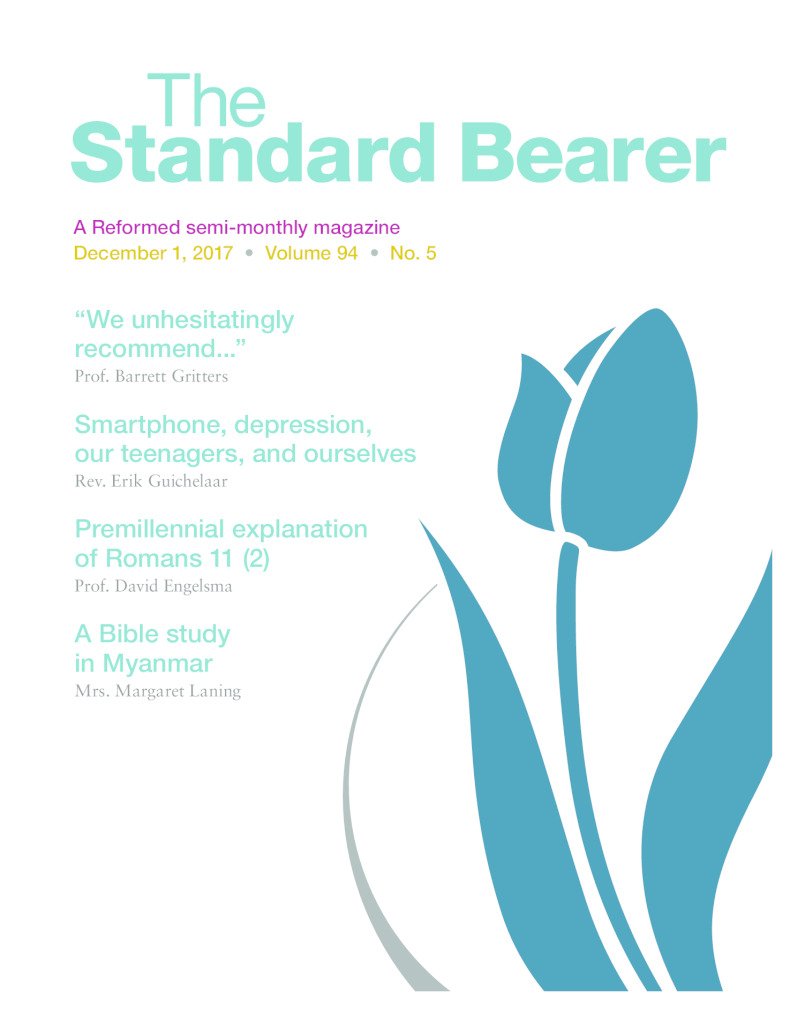