Ye shall hear of wars and rumors of wars: see that ye be not troubled: for all these things must come to pass, but the end is not yet.

Ever since the fall of our first parents in Paradise, the world has been at war. The disobedience of Adam and Eve and their alliance with Satan by eating of the forbidden tree already created between the two of them a strained relationship which could only be healed by grace.

God had put enmity between the seed of the serpent and the seed of the woman, as became evident already when Cain killed his brother Abel. In rebellion against God, Cain’s descendants persecuted the church. As a result, about fifteen hundred years later the first world was ripe for judgment and was destroyed by the deluge. Only Noah and his family were saved by the waters of the flood.

Not long after the flood, Nimrod the mighty hunter tried to unite the descendants of Shem, Ham, and Japheth into a world empire at Babel. God prevented him by confusing their language, and as a result they were scattered over the face of the earth. The breach of Babel will not be healed until almost the end of the ages. Already today we see efforts toward unification in a striving for a universal language, a common market, same currency, etc., which will ultimately lead to the kingdom of Antichrist.

Ever since Nimrod, nations have risen against nations, wars and rumors of war have continued unceasingly. One kingdom was swallowed up by a stronger one. Thus Syria was taken over by Assyria, Assyria was conquered by Nebuchadnezzar, and the Babylonian kingdom was established.

It is interesting to note that Nebuchadnezzar made an image to be worshiped by all the princes of his kingdom. The dimensions of that image equaled the number 66: sixty cubits high and six cubits wide. We can plainly see here a forerunner of the Antichrist, whose number is 666.

One more must appear, but in the meantime the devil is bound for a period of a thousand years, that is, for a time determined by God in which he cannot deceive the nations so that they unite as a world power.

But that does not mean that the world is at peace. Wars and rumors of war continue throughout this present dispensation. There always was and there always will be a struggle for supremacy, for ruling the world, even until the end of the ages.

It has been said that World War I was a war to end all wars. A League of Nations was formed. A peace palace was built. But it was not long before we were engaged in World War II. The United Nations has built a large, costly building where all the world’s problems were to be solved. But even that has not brought an end to warfare.

Our own nation gained its independence through a revolution against England. Later we engaged in a civil war. We became involved in wars with other nations. In the meantime, there were always numerous wars and struggles going on all over the world. There was a “cold war,” as well as constant threats of new wars.

We cannot fail to notice that in each war new and more powerful weapons of warfare are employed. The world has gone from the club to the bow and arrow, then to the sword and the battering ram. In more recent years guns and airplanes have come into use in war, trench warfare has become bombings, and bombs have been developed into nuclear and biological weapons whereby untold destruction can be wrought both upon property and to human lives. It appears as if the time will come when the nations will be so thoroughly prepared to wipe each other out that the world may be in a deadlock, not able nor daring to make the final blow that would end in total disaster. Does this mean that also in that sense the world will come to a stalemate, that the battle of Armageddon has no finish, except by the coming of the Son of man? We can only surmise.

We can hardly imagine the hatred that is built up, the constant agony involved, both for those who are on the battlefield and for those who are in the area, even for those who are threatened with bombings day and night. Not to mention the rape of women and plunder of homes during the war. And there are the bitter consequences. This includes not only loss of valuable property, destroyed cities, but also the dead, the wounded, the maimed, and the paraplegics, as well as their families who must suffer along with them. Even the victor suffers heavy losses of lives and property, losses that can never be made up.

This ultimately leads to the final battle of Armageddon. It has been said that history may end where it began, near the former garden of Eden. This final battle results in the coming of our Lord with the clouds of heaven.

All these things must come to pass.

Revelation 6 speaks of the Lamb opening the seals, that is, carrying out the counsel of God as exalted Lord in heaven. Then we read that the white horse with its rider is sent forth to spread the gospel to the ends of the earth. Then the red horse is sent out to take peace from the earth.

There is a close relationship between the spread of the gospel and the opposition it receives in the appearance of false Christs and the continuous warfare throughout this dispensation. The false Christs and the wars increase; the one in the church, the other in the world, until the cup of iniquity is full. These both are the ragings of the wicked against God and His Anointed. They are determined to wipe out God’s cause and God’s name from the face of the earth. Man must triumph over God.

There is, on the one hand, the power of Satan and his forces. He does all that he possibly can to bring unrest among the nations and to wipe out God’s cause from upon the face of the earth. Besides that, man by nature is prone to hate God and his neighbor. He is incapable of any good and inclined to all evil. That reveals itself among the nations in covetousness, greed, pride, and jealousy. We think, for example, of the emperors who were greedy for power and wanted to be worshiped as if they were gods.

On the other hand, God is carrying out His counsel also through wicked men.

In spite of, even through, the efforts of the powers of darkness to prevent God’s cause from prospering in the world, God gathers His church. He preserves and defends her over against all the onslaughts of the wicked.

Be on your guard. Let not your heart be troubled.

Psalm 2 declares: “Why do the nations rage, and the people imagine a vain thing? The kings of the earth set themselves, and the rulers take counsel together, against the Lord, and against his anointed, saying, Let us break their bands asunder, and cast away their cords from us.”

You know what follows: “He that sitteth in the heavens shall laugh: the Lord shall have them in derision.”

Why? Because God has set His king upon the holy hill of Zion! All power is given to the exalted Christ in heaven and on earth. Nothing happens apart from God’s will. All the evil powers of darkness must serve toward the coming of the Lord.

It is in that confidence that we pray, Thy kingdom come! Yes, that includes wars and rumors of war, even mass destruction, bitter suffering for God’s people. It also includes the rise of the Antichrist, who in a sense is already among us. But in all these things we are more than conquerors through Him who loved us and loves us still!

No, the end is not yet. That is, wars will not bring the kingdom of heaven. But Christ is carrying out God’s counsel until God’s purpose, His goal, is attained. God’s judgments are a mighty deep, and as the mountains high. But Jesus assures us: Behold, I come quickly, even speedily. Not one word shall fail of all that God has promised.

Thus He encourages us: “Be thou faithful unto death, and I will give you the crown of life.” 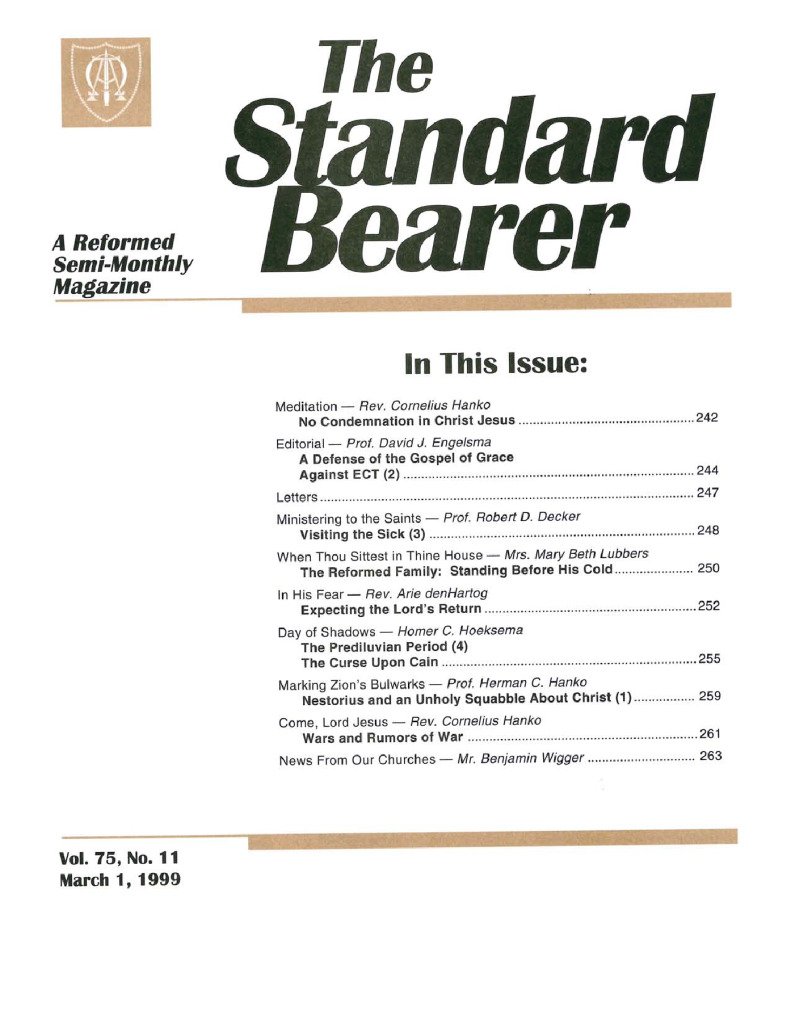