There is considerable discussion these days in the newspapers and magazines both of a secular and religious nature about the question whether we will have war or peace. While on the one hand there is an almost universal opinion that we are heading for another world conflict that will have annihilating consequences, there is on the other hand a strong but apparently hopeless desire for peace. It is with a view to this situation that the April 13th issue of Christianity Today devotes almost all of its contents to this subject.

Perusing the pages of this periodical one finds the following topics discussed: The Peace Drive in the Churches; The Layman and his Faith—Peace; Can We Meet the Red Challenge? Meeting Communism in the Far East; The Search for Peace on Earth; The Biblical Vision of Peace; Reflections on Communist Atheism.

It is apparent from these titles that Communism is conceived of as the greatest threat to peace. And because Communism in its very nature is atheistic and anti-Christian, the question is posited: What can Christianity with its Christian nations, churches, and peoples do not only to combat this evil menace and negate its power, but also to effect and maintain the peace?

The main editorial under the title: The Peace Drive in the Churches, takes the National Council of Churches to task for its latest Cleveland pronouncement according to which it was decided to recommend that the United States recognize and the United Nations admit Red China. The editor points up that even the majority of the N.C.C.’s constituency is not in agreement with the latest pronouncement of that Church organization.

Dealing more specifically with the problem of war and peace, the editor gives his views in the following statements:

“In coping with problems of world-order and peace, modern formulas, of ‘reconciliation’ show the outlines of speculative theories of man and society, and betray their neglect of the biblical view of the Church and its sacred task in the world. Recent issues of Christianity Today have pinpointed the peril to the church of neglecting its basic commission to call out a new race of twice-born men, of relying on world systems (softened by religious idealism) for reconciliation and redemption, of pragmatic pursuit of social change. Corporate Protestantism stumbles into these unhappy lines of thought and action through its indifference to the great principles and precepts of revealed religion . . . The Christian religion, above all others, is on the side of peace. Its faith is fixed upon ‘the Prince of Peace’ who in turn has pronounced a special benediction upon the peacemakers. Repugnant to Christianity, however, and contradictory of it, is the ‘peace at any price’ philosophy that infects a self-indulgent people too often, bent on immediate ends. The blood of the Cross is a reminder that peace, in Christian dimensions, carries its distinctive price. War is no Christian weapon for world conversion, nor is foreign aid. The world’s predicament is moral and spiritual; this calls for moral and spiritual redemption.”

Lt. General William K. Harrison (U.S. Army—retired) writes the following under the title: The Search for Peace on Earth.

“Christians should be definitely concerned with the peril the world faces in this day of war risks. Nuclear weapons, if used to their’ full extent, would have a devastating effect upon all mankind and civilization. With such a. possibility, is it any wonder that Christians ask themselves what they can do to help prevent such a catastrophe and establish a basis for real peace among nations? Surely Christianity has the answer to this problem. But what is it, and how can it be put into effect?

“Specifically, our immediate threat is Soviet Russia. The United States and Russia are the chief military powers today, and in their mutual antagonism and arms race lies the potential of a world war, despite the fact that both peoples fear and would avoid such war, Regardless of the numerous economic and political elements that lead to conflict, war itself results from a decision on the part of the ruler of a state to launch his military forces against a nation which he considers his enemy. The latter has only two choices: to fight or to surrender. Unless the ruler on the aggressive side makes the decision for war, there is no war, except in cases where a subordinate military commander has precipitated action through panic or mistake. In the United States such a risk is slight because of the precautions that have been taken against the danger. Far more likely is the event that extreme difficulty of keeping a defensive force or nation on the alert may some day lead to a relaxation of watchfulness, thereby offering to Russia her opportunity for successful surprise attack.

“The danger of nuclear war results from the possibility that Soviet leaders will some day launch their armed forces either directly against the United States or against some object which the United States wishes to defend. To these Soviet rulers, war, when favorable to them, is a legitimate and necessary means of action.

“The means by which they have gained and maintained their own political positions and control over their own people reveal the nature of these men. They have proven to be ruthless criminals—murderers, thieves, traitors—in spite of the fact that they hold positions of prestige and great power. Krushchev survived Stalin’s bloody purges only to participate himself in and profit by them. The social amenities and diplomatic phrases of these leaders have been merely a cloak over their real character. They have demonstrated their true disposition in past dealings with other nations, a fact that is known to all who read newspapers. The pages of history are full of tyrants and conquerors. Soviet leaders are no different. Communism is the ideology or propaganda that motivates these men, and by it they justify their actions. Their actions, acceptable by Communist standards, have been violent, deceitful, and ruthless. Any American policy that views Khrushchev and his kind as other than the most treacherous of criminals is endangering not only the United States but the whole noncommunist world.”

In answer to the question, What can be done to preserve peace? Gen. Harrison presents some of the ideas that have been advanced by men of authority; and having presented each in turn, he shows up the fallacy of them.

We mention only the ideas that have been advanced for the preservation of peace in order then to give Harrison’s own answer to the question.

1. “That nuclear weapons have outmoded war.”

2. “We should unilaterally reduce our armaments in order to demonstrate good will and both lessen Soviet suspicions toward us and reduce our own burdens.”

3. “We should transfer our cold war to an economic and social, competition which would include aid to backward nations.”

4. “We by acquainting the masses of Russian people with our peaceful and friendly intentions would make them dissatisfied with their status and they in turn would compel their rulers to change their objectives and tactics.”

5. We should “rely more on the United Nations for our security.”

Harrison claims, and we believe correctly so, that all these “approaches to world peace are essentially pacifist.” He concludes his remarks on these ideas by saying:

“It is to be noted that many of the pacifist ideas mentioned above appear in some form in the reports and recommendations of the Fifth World Order Study Conference held by the National Council of Churches in Cleveland in November, 1958, as reported inChristianity Today. That such ideas should be seriously advocated by leaders of this organization is incomprehensible. The best that can be said for these men is that they are incredibly naive. It is to be fervently hoped that pastors and laymen of the NCC who are able and willing to think independently will see the facts realistically, and will repudiate such disastrous proposals.

“Contrary to the foregoing pacifist proposals is the thought that we can gain peace only by a powerful military force constantly ready to retaliate with deadly effect. Any force of less strength than this is ineffective. But is not military power only a deterrent against Soviet attack? It possibly has the advantage of putting off war until the time domestic conditions in Russia cause a change in the kind of rulers there. This is faint and not very dependable hope. An armament race causes psychological and financial tensions which cannot endure indefinitely. Eventually explosion occurs. Were the strength of nuclear armaments to give hope for victory, such a victory would be of doubtful value.”

Harrison closes his article under the subtitle: Christ The Hope of Peace.

“The fact of the matter is there never has been a human way of gaining and maintaining peace. If men who call themselves Christians would believe the plain language of the Bible, which is the sole basis of Christian faith, they would understand the reason for men’s futility. It is sin, the sin of rebellion against God, the determination to live independently of him, and in enmity with their neighbor. Therefore, God has given them up to those moral evils which cause war among men (cf. Rom. 1:18-31). Men cannot undo what God has done. The Bible tells us clearly that our civilization will come to a disastrous end, involving, among other judgments, terrible wars, famines, disease, death, and destruction (cf. Matt. 24; Rev. 6-18). Our Christ-rejecting civilization is doomed (cf. II Thess. 1:7-9). The only hope for a peaceful world is in the coming of the Lord Jesus Christ. Any attempts to find other solutions by efforts of human will and action will be futile.

“What can Christians do in view of this analysis? First, we can surely use whatever influence we have to see that our country deals honestly and, as far as possible, peacefully with other nations. Second, we ought to warn people of the coming judgment of God which will fall inevitably on wicked humanity, including our United States. Third, we must spread the Gospel of Jesus Christ for the salvation of individuals from that final and eternal judgment of God, of which earthly sufferings and tribulations are only a vivid warning. Fourth, by God’s grace we should live in a way that proves that we have conviction in our preaching. Finally, we may pray for peace in the hope that God will delay his judgment on it . . .”

Though we might say the things’ differently than Gen. Harrison has written them, there is nevertheless in his analysis, and that, too, coming from a retired general of the army, something remarkable and quite antithetical to the modern conception of the subject. What is so noteworthy is the fact that he has observed in the light of Scripture that war is always inevitable because of the sin and corruption of mankind and because of the judgment of God upon that sin and corruption.

How foolish then to think of world peace or to pray for it so long as this condition continues. According to Scripture, war has been with us almost from the dawn of history, and the history of the world will end in a final war. And in between these parentheses there is continual war and rumor of war. It is true what Harrison writes: “The only hope for a peaceful world is the coming of the Lord Jesus Christ.” But then, it will not be this present evil world that lies under the power of sin, but the world of God’s eternal love wherein righteousness shall dwell. In the meantime the Christian by the grace of God possesses in his heart the peace that surpasses all understanding. That’s why we headed this article with the title: War And Peace, not, War Or Peace. 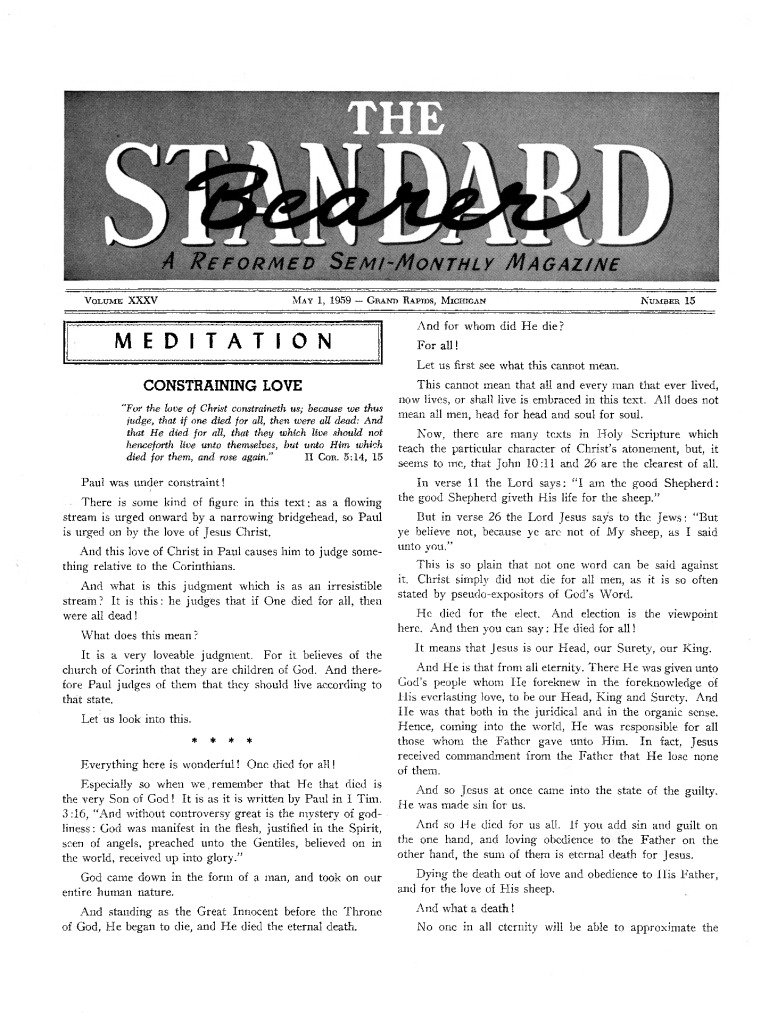