Sion or Zion, the mount upon which the Canaanite town of Jebus was situated, was a place with a fair and lovely climate, but it was blessed especially with the natural defenses found in its high aspect and in the three deep valleys that surrounded it. In addition, the city had a natural water source in the Kidron Valley just outside the city walls, the Spring of Gihon. Named from a verb meaning “gush forth,” the spring supplied fresh water in abundance, refreshing and cleansing the people, and providing ample water for their terraced gardens throughout the valley. King David realized Zion’s value as a central location among the tribes of Israel not long after coming to the throne of Israel, determined it would be the place from which he would rule the tribes, and fought the tenacious Jebusites to secure it.

Upon Mount Zion, in the southeastern part of the old city, King David built his mighty citadel, fortified it with even more secure ramparts, and renamed it “the City of David.” To this place he also brought the ark of the covenant to signify God’s own presence in Zion. Even so, Zion was not the highest point in this mountainous area. In a higher place, on a northerly ridge known as Moriah, was an ancient Canaanite threshing floor, along with altars to many of their gods. Here was the place David reserved for God’s house, although God told David that he would not build this temple himself. It would, however, rise there under his son Solomon’s direction to be the very place wherein God would dwell, the glorious temple of the living God of His people.

Zion became a treasured place for the people of God as it expanded from the part of the hill containing the City of David to encompass all of the surrounding area, including the temple of God in the northern part of the mountain. Gradually, the name “Zion,” which had once referred just to Old Testament Israel, grew to encompass the entire church of God, comprised not only of God’s people found in Israel’s tribes, but also those who had been dispersed by conquering nations, famine, and persecution, and later those of the Gentile race gathered from heathendom. With joy in their hearts, all of God’s people who were able went up to Jerusalem to worship, lifting their eyes to the hills in the distance as they traveled with anticipation. With the beautiful picture of God’s provision, protection, and abiding presence before them, their songs began to arise to His praise even as they ascended those hills, wherein lie the place of rest after a long, uphill journey; the place of refreshment and community among God’s people; the place of safety from all threats: God was in the midst of her; she would not be moved. It is no wonder then that God, through the psalmist in Psalm 48:12-13, urged His people to “walk about Zion, and go round about her; tell the towers thereof. Mark ye well her bulwarks, consider her palaces; that ye may tell it to generations following.”

Researching the history and geography of Jerusalem and the place known as Zion may stir in us a desire to walk about Zion and see the ancient homes of great kings and the places where the Great King of Israel, Israel’s Messiah, walked. But we, the church of Jesus Christ in this twenty-first century have so very much more than the Old Testament saints ever imagined. As glorious as the long-awaited arrival in Jerusalem was for the pilgrim travelers, and their ascent to the highest point where the temple of God stood, joining in the music that floated downward from those holy courts, these were still but a symbol of the reality of God dwelling among them. We, His church on earth, now have God with us—Immanuel; and our bodies are the temples of the living God, spiritual temples with His Spirit indwelling us, the very Spirit of the risen Lord Jesus Christ. We, His church, are Zion, a spiritual house. And the Holy Spirit through the psalmist likewise bids us to walk about Zion and view the springs that gush forth His grace; the towers and ramparts of protection He affords us; and the glory of His presence, here and now, showing forth an even greater glory yet to come. There is no better time to take this walk and consider the spiritual kingdom of Zion, which is a harbinger of the heavenly Zion yet to come. For as we walk and consider, we, just like those who longed for the earthly Jerusalem visible in the distance as they journeyed, also rejoice, for we see the beauty of the heavenly Jerusalem approaching nearer and nearer.

As God’s people came up from the valleys to worship, there were difficult places to navigate—shadowy, barren, and threatening—and beyond their own strength to continue. Israel could be a dry and thirsty land, and weary pilgrims, fainting with thirst and fatigue, often cried out for relief. And the springs of Gihon did not gush forth at all times; those who have studied them tell us they were intermittent springs. Yes, there were great times of refreshment, when the bountiful rains came and Gihon’s springs overflowed with abundance, rushing down into the valleys below, and providing enough water to enrich the terraced gardens and to fill rock-cut pools that served as reservoirs even for later need. But there were also times when the people suffered dry spells, when the rains were sparse and the land became “dry and thirsty” (Ps. 63:1).

Is that not so for us as God’s people as well? Are there not often times of weariness for us His church, as one dry period follows another and there seems to be no relief from the thirst for truth and genuine love in a changing world opposed to Christianity, and no rest from engaging in spiritual warfare within and without ourselves throughout the week? Are there not times when we would love to abandon our baggage beside the pilgrim trail and leave for some place that would offer immediate relief, the shaded gardens of pleasure or oceans of happiness that the world offers? Do we not tire of warning our children and young people of the dark dangers that threaten those who leave the path to meddle with things that appear to offer immediate relief to earth’s many woes?

Then, we must “walk about Zion,” too, with our families, especially in our times of fatigue and questioning, “coming into God’s temple” to hear the gospel, opening His Word and communing with Him in our hearts, for it is there that we see blessings—of His grace, His love, and His tender mercy that continually pour down upon us. We must lovingly remind each other that all of our fountains are in Him, and in no other (Ps. 87:7). We have a Source for pure joy in our God, Who has promised His people: “I will pour water upon him that is thirsty, and floods upon the dry ground: I will pour my spirit upon thy seed, and my blessing upon thine offspring” (Is. 44:3).

And what about the times when real physical enemies surround us? What about the times when sin and evil come near, even physically entering into our homes to harm us or our children? Almost daily we hear of heinous crimes in our world—home invasions, robbery, murder, kidnapping and selling of children, school shootings, hate crimes, and a host of other evils in a society that grows increasingly wicked. These have affected God’s people at times, and will continue to, as well. When Satan works in some hearts to bring abuse—physical, psychological, spiritual, and sexual—to some of God’s children through others who claim the name of Christian, even in what seem to be “protected places,” then where can one run for protection? Many of our brothers and sisters in Jesus Christ already suffer physical danger as Christian believers in lands and villages opposed to Jesus Christ, and some are currently displaced from their homes, imprisoned, tortured, and even killed. Added to this are dread diseases that can invade our bodies and minds and cause devastation. When there is nowhere else to turn, when we are in such grave physical danger, where is our help, our protection, then?

The answer to that comes once again by walking about Zion: seeking God in prayer, being edified and strengthened by His Word, and embracing His promises by His abiding grace and Holy Spirit within us. With our fellow saints and loved ones, we must count the lofty lookout towers that soar above the enemies seeking to overthrow God’s city. We must mark the many places that are bulwarks, which will not allow enemies to so much as touch our souls even though they may breach our physical bodies for a time. We must consider that Jehovah God Himself is that rock, that salvation, that defense (Ps. 62:1) and we will not be moved away from Him, not ever. When all that we own may be threatened, we must consider the wealth of her palaces, the fair dwelling places whose wealth cannot be stolen from us, become rusty, or be eaten by moths because it is spiritual treasure guarded by His watchful eye. These promises are not only for this life, but for our everlasting life with Him in heaven as He calls us to Him.

And, for eternal comfort in this present life of physical pain, weakness, and temptation, above all we must “consider him that endured such contradiction of sinners against himself, lest [we] be wearied and faint in [our] minds” (Heb. 12:3). Because of Him—our Lord Jesus Christ—death and sin are swallowed up in victory forever. He is the Healer of those broken by the sins of others. Our temporal enemies, enemies of the cross of Jesus Christ, will face Him as their Judge in the Last Day. Those of His people who have been lured by Satan into committing sins against God’s beloved saints, and who repent of their sins in sincerity, have a Savior Whose blood washes them white as snow, freeing them to abide in Him once again. The bodies of God’s children that have been ravaged by physical attacks, evil aggression, and diseases of this world are still His holy temples, damaged though they are. Whatever is done to Christ’s children is done to Him, and justice will prevail for that. That same flesh will go to the grave and rest until He returns and it rises from the grave in perfection to rejoin our already-glorified souls. If that ravaged body is still here when the Lord comes again, it will be changed “in a moment; in the twinkling of an eye, at the last trump” (I Cor. 15:52), when He returns, to become perfect and whole once again along with the soul, and be received into glory forever. There is nothing that can separate us from His love (Rom. 8:28).

As we witness sin’s corruption in our fallen world, fight sicknesses ourselves, and experience those of our loved ones, and as we must walk to the grave time and time again in our lives and face the last enemy, death, we must not fail to see that God’s presence always has been and always will be with His church. He is our Provider, our fountain of life and blessing; He is our Protector, Who watches over us, His people, at all times and in all places; and He is the eternally present God of our lives. Walk about Zion, and tell this to the generation following, even as you sing praises to Him with great rejoicing among His saints there. 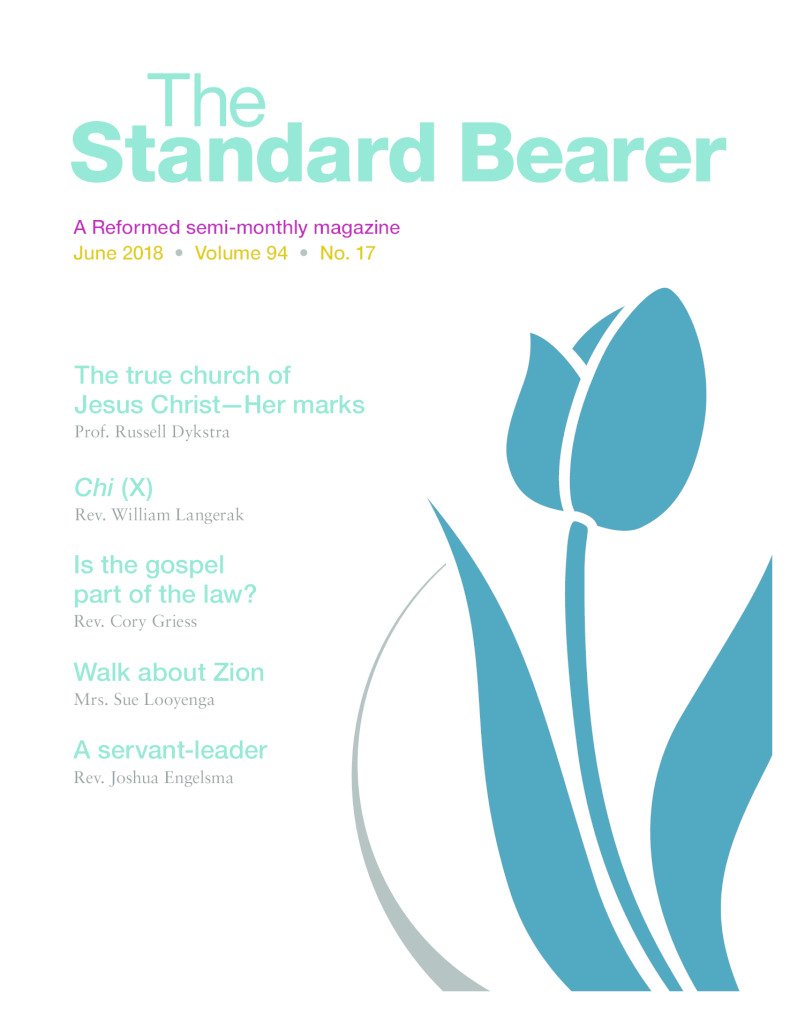