It needs to be acknowledged at the outset that it is impossible to anticipate the many and various questions, circumstances, and problems an elder will be involved with in his ministry to the sick. There is no way an article or two such as this one can prepare an elder for all of these. All that one can hope to accomplish is to set down certain basic biblical principles, trusting that the Lord will give His servants grace to put these principles into practice when the time is there and as the circumstances present themselves. After all, our heavenly Father must work by His Word and Holy Spirit through the elders to supply the need of the sick among His saints or that need will not be met.

It is not the elder’s calling to give medical advice. It can rather easily happen that an elder will do this, or at least be tempted to do this. The elder (especially the minister) in the course of his work meets all kinds of diseases. Soon he learns to recognize symptoms. He becomes familiar with the “treatments and medications of choice” for various conditions and diseases. But he must leave the medical aspects to the person’s doctors. This does not mean the elder may give no advice whatsoever. He may, e.g., advise a person to get a second opinion. He may advise a person with life threatening heart disease to seek treatment at the Cleveland Clinic. But beyond this sort of advice the elder must not go. The elder must not get involved in the diagnosis and treatment of the illnesses of God’s people.

The elder is always the servant of Christ. He is called by the Chief Shepherd, Christ, to shepherd the flock of God. This means, among other things, that the elder ministers to the sick in their spiritual need.

Because the elder is the servant of the Chief Shepherd, he must not assume the role of a psychological counselor with the sick. The elder’s calling as Christ’s servant is not to provide psycho-therapy for the anxious and/or depressed among the congregation. There is, obviously, a close connection between the physical, the psychological, and the spiritual dimensions of a person. Clinical depression can be an effect of some illnesses. Post-operative depression occurs rather commonly, especially following major surgery. Some women suffer rather severe depression following the births of their children. This is called post-partum depression. There are medications available today which can in most of these cases alleviate the symptoms and help the child of God get through these depressions. The point we are trying to make is that the elder must recognize the fact that a person’s condition may not in every instance be rooted in a specific sin. Anxiety/depression, e.g., may not be due to a lack of faith, but due to a physical condition.

But, in any case, the elder must remember that the real, root need in sickness is spiritual. The spiritual need transcends both the physical and the psychological and is, for this reason, far more important than either.

Positively, let the elder remember, and those whom he shepherds too for that matter, that he is a servant and, therefore, a representative of Jesus Christ, the Great, the Good, the Chief Shepherd of the sheep. Christ calls the elder to the office and Christ qualifies him with the necessary gifts of grace to do the work of shepherding the sheep. To Christ the elder will give an account of the care he bestowed on Christ’s sheep (Heb. 13:17). This means that the elder must always bring the Word of God to the sick and “pray over” them (James 5:14). More than anything else, more than physical healing and restoration, this is what the sick need. In one word, they need to be saved from sin and death through the cross and resurrection of Jesus. It is the Word of God and the “prayer of faith” which alone can save the sick (James 5:14-15).

That the need of the sick is fundamentally spiritual is also evident from the fact that Scripture connects sickness with sin, the fall, and the curse of God. When the Lord God told Adam that he might not eat of the tree of the knowledge of good and evil, He said, “for in the day that thou eatest thereof thou shalt surely die” (Gen. 2:17). Adam and Eve disobeyed the Lord’s command and ate of that tree, and they died (Gen. 3:16-19). Sickness belongs to the dying! Death is the punishment of God on account of man’s sin (Rom. 6:23). Sickness is the fruit of sin.

It is true that the Christian has the victory over sin and its fruits, also sickness and death, on account of the cross and resurrection of Christ. But as long as he is still on this earth the Christian’s victory is in principle. He still has to battle what Scripture calls “the flesh” or “the old man of sin” (Rom. 7:5, Eph. 4:22). Inasmuch as he still needs to put off the old man, the Christian is also subject to sickness and death. The child of God still shares in “the sufferings of this present time” (Rom. 8:18).

The elder must visit the sick in the awareness of all this. He must, by means of Holy Scripture, point the sick to Jesus, who “heals our diseases” because He “forgives our iniquities” (Ps. 103, Is. 53).

That sickness is the fruit of sin is true not only in some general sense, but also in specific instances. Suffering, sickness is connected with particular sins. This is obvious in several instances. Sexual promiscuity, adultery, fornication often result in venereal and other sexually transmitted diseases. Homosexual and lesbian behavior very often results in AIDS. Habitual drunkenness results in brain damage or cirrhosis of the liver. These illnesses are not merely the natural results of the sins, God sends them upon the sinner in His righteous judgment.

What is true of these sicknesses is true of all the sickness a child of God experiences. Always the illnesses of God’s children are directly connected not only with sin in general, but with one’s own sins. God’s chastisement always fits the sin. This is precisely why there is suffering and sickness in the lives of the children of God. God sends these chastisements in His love in order to sanctify his children (Heb. 12:5-11). Were God’s children already perfectly free from sin in this life, there would be no need for their suffering. Part of the glory God’s children shall experience in the new heaven and earth is that “God shall wipe away all tears from their eyes; and there shall be no more death, neither sorrow, nor crying, neither shall there be any more pain; for the former things are passed away” (Rev. 21:4). When the child of God finally puts off the old man in death, all the effects of sin are also put off.

This leaves us with the question, ought the elder try to determine the sin or sins and point them out to the sick parishioner? In general terms the answer must be affirmative. It is perfectly proper to lay down the connection between our sins and sicknesses from the point of view of the sicknesses being the “chastening of the Lord” (Heb. 12). This has a good effect on the Christian. He learns to ponder his own sins and sinful nature and to confess with the psalmist, “It is good for me that I have been afflicted that I might learn thy statutes” (Ps. 119:71). This causes the Christian to appreciate the goodness and faithfulness of God. The awareness of the relation between his sickness and his sins leads him to confess, “I know, O Lord, that thy judgments are right, and that thou in faithfulness hast afflicted me” (Ps. 119:75). This awareness also causes the Christian to trust the more in God and to ask the Lord, “Let, I pray thee, thy merciful kindness be for my comfort, according to thy word unto thy servant” (Ps. 119:76).

In specific instances the answer to the question, ought the elder try to determine the sin and point it out to the sick, is sometimes affirmative. There are instances where the connection between the sickness and the sin must be pointed out. The habitual drunkard who is suffering from cirrhosis of the liver needs not only medical attention, he needs to repent of his sin or he will perish!

Beyond these instances, however, the elder ought not go. He ought not attempt to tell a parishioner that he is sick because he has committed a certain sin or because he has a certain sinful weakness of character. This is a matter best left between the sick person and the Lord. God by means of His Word and Holy Spirit must do the judging. If the sick person asks whether his sickness is on account of a specific sin, give the question back to him. If he confesses to a specific sin, the elder can then deal pastorally with him.

* There is a detailed, excellent exegetical study of this passage, by Prof. Herman Hanko, in the Protestant Reformed Theological Journal, volumes VIII and IX. 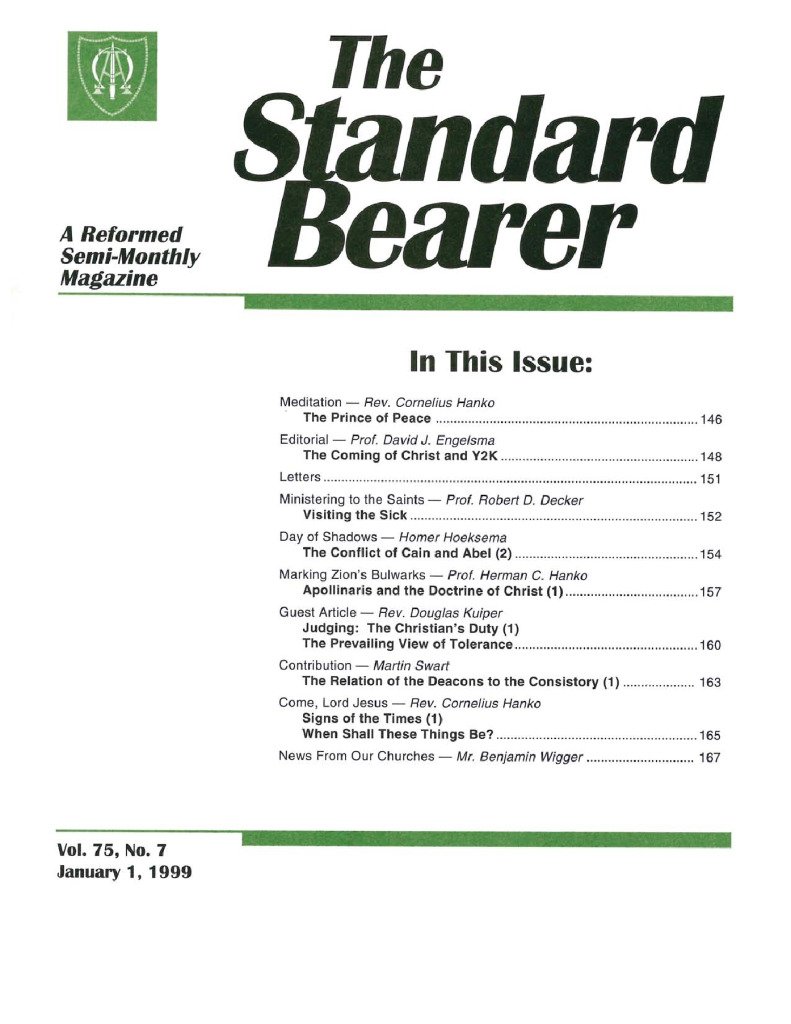