Upon this rock (33): Nebuchadnezzar, My servant

Upon this rock (33): Nebuchadnezzar, My servant

“Bring your necks under the yoke of the king of Babylon, and serve him and his people, and live.” Jeremiah 27:12-13

Hardly a popular course of action was that being advocated by the prophet Jeremiah. To submit meekly to foreign domination would strike the people as being so un-Jewish, so unpatriotic. There were, in fact, immediate attempts to discredit the message of God’s prophet. Of one of these attempts we read in chapter 28. Hananiah came to the people with what he claimed also to be the word of the Lord. “I have broken the yoke of the king of Babylon. Within two full years will I bring again into this place all the vessels of the Lord’s house…. And I will bring again to this place Jeconiah [Jehoiachin]. . .with all the captives of Judah, that went into Babylon, saith the Lord” (Jer. 28:2-4).

Meanwhile, there were false prophets also in Baby­lon who were attempting to mislead the Jews who were already living in exile. Jeremiah, therefore, sent a letter to the captives (29:1), warning them against the prophets and diviners who deceived them, prophesying falsely in God’s name (29:8, 9). In contrast to the false prophets who predicted speedy deliverance from captivity, Jeremi­ah advised the people not only to build houses and plant gardens in the land of their captivity (29:5) but actually to “seek the peace” of Babylon and to “pray unto the Lord for it” (29:7), for they could not expect to be allowed to return to Jerusalem till “after seventy years be accom­plished at Babylon” (29:10).

It seems that Zedekiah, for the first years of his reign, had resisted pressure to join in any anti-Babylonian league. He must, in fact, have made every effort to court the favor of Nebuchadnezzar, to whom he was indebted for his elevation to the throne in Jerusalem. Finally, how­ever, as he became more secure in his position as king, as he was encouraged by the testimony of false prophets, as he was influenced by the desires of his princes, and as he was enticed by overtures from Egypt, Zedekiah joined in opposition against the power of Babylon. According to Ezekiel 17:15, he sent ambassadors to Egypt, requesting aid in the form of “horses and much people.” And he did all this in spite of the oath with which he had promised to serve Nebuchadnezzar.

Angered by the repeated rebellion of the kings of Ju­dah, Nebuchadnezzar determined to put it down once and for all. It seems that he led his army quickly to Riblah and set up his headquarters there (cf. II Kings 25:6). In a very short time Judea was overrun, and Ne­buchadnezzar and his host were again outside the walls of Jerusalem.

When Zedekiah, in these dire straits, sent to in­quire of the Lord through Jeremiah (Jer. 21:1, 2), the prophet predicted in no uncertain terms the complete destruction of the city (21:10). And, just as plainly, he advised surrender. “He that abideth in this city,” he said, “shall die by the sword, and by the famine, and by the pestilence: but he that goeth out, and fall- eth to the Chaldeans that besiege you, he shall live” (21:9).

As could be expected, his advice was not at all well received. The princes advocated holding out. And for a short time it seemed as if the princes had indeed giv­en wise advice. For the army of Pharaoh came out to challenge the Chaldeans. Nebuchadnezzar, therefore, “departed from Jerusalem” (Jer. 37:5) to go and meet the Egyptians.

The message of Jeremiah, however, was increas­ingly emphatic. “Deceive not yourselves,” he warned, for the Egyptians will be forced to retreat, and the “Chaldeans shall come again, and fight against this city, and take it, and burn it with fire” (37:6-9). So certain was the destruction of Jerusalem, he insisted, that “though ye had smitten the whole army of the Chaldeans that fight against you, and there remained but wounded men among them, yet should they rise up every man in his tent, and burn this city with fire” (v. 10).

For one year and six months, the city withstood the siege. After that long a time, famine and pestilence must have become a way of life for the inhabitants of Jerusalem. And yet they continued to despise the word of Jeremiah, and insisted on holding out to the bitter end. When it was apparent that the end had finally arrived, Zedekiah and the men of war sought safety in flight, under the cover of darkness (Jer. 39:4)—thus making one last, desperate attempt to avoid at least part of the consequences predicted by Jeremiah. But there was no escaping that word of prophecy. The Chaldeans pur­sued and overtook them in the plains of Jericho (39:5). It seems that Zedekiah’s army scattered in every direc­tion (II Kings 25:5), and the king and his household were taken captive to Riblah, where Nebuchadnezzar had his headquarters. After forcing Zedekiah to wit­ness the death of his own sons (and perhaps of his no­bles), Nebuchadnezzar “put out Zedekiah’s eyes, and bound him with chains, to carry him to Babylon” (39:6, 7). Thus was fulfilled the prophecy of Ezekiel, that God would “bring him to Babylon to the land of the Chal­deans; yet shall he not see it, though he shall die there” (Ezek. 12:13).

The city of Jerusalem still stood. But not for long. Nebuzaradan, the captain of the guard, after he had received his orders from Nebuchadnezzar, proceeded to the systematic sacking and razing of the city (II Kings 25:8-17). He burned the palace and all the houses of the people. He tore down the mighty walls of the city. He stripped from the temple of God everything of value and then burned the building to the ground. The city, as Jeremiah had foretold, was leveled. And the inhabitants were carried to Babylon (Jer. 39:9). Nebuzaradan left only the “poor of the people, which had nothing, in the land of Judah” (v. 10) to till the land.

Next time: The land left desolate. 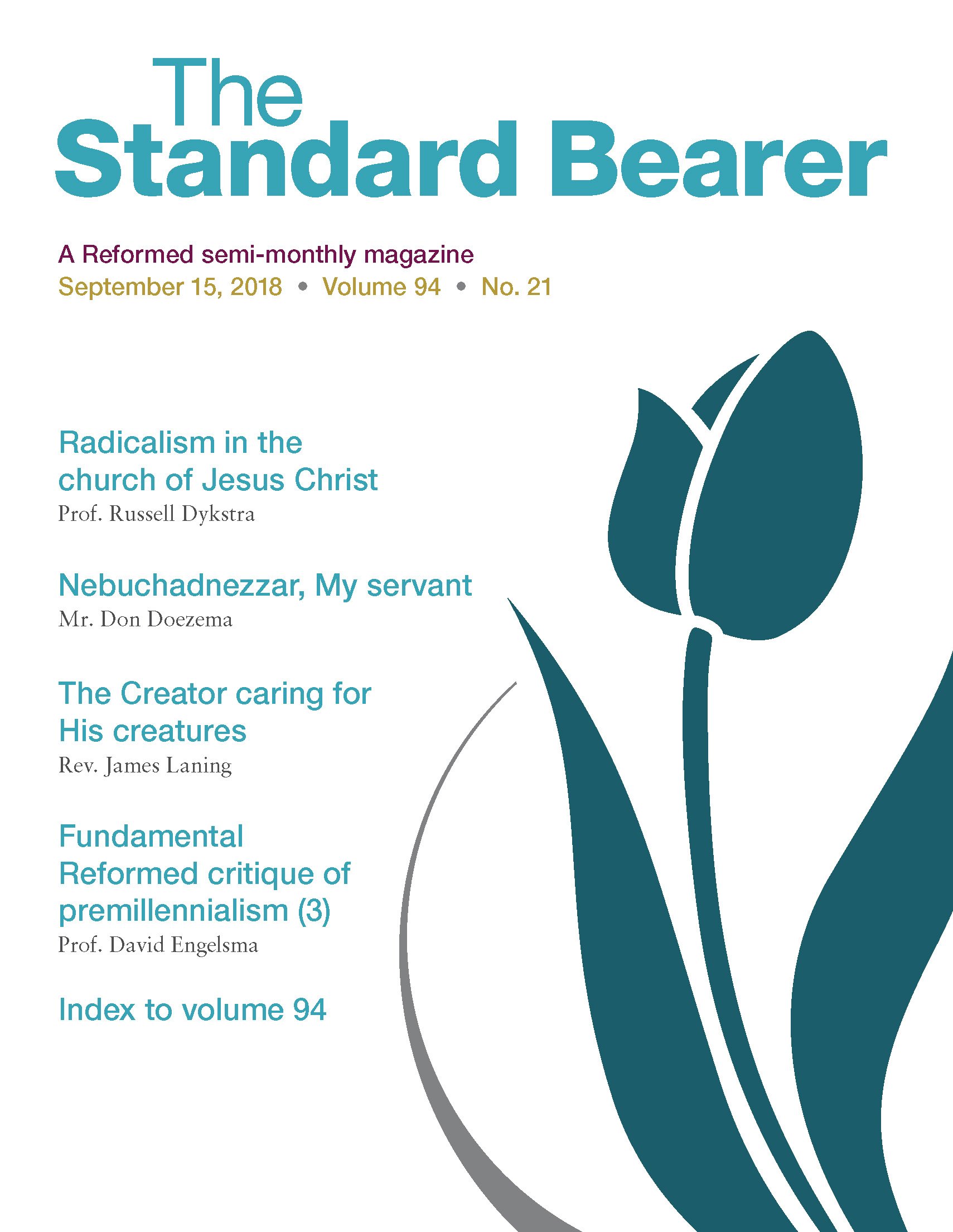