Upon This Rock (3): The End of Israel

Upon This Rock (3): The End of Israel

During the reign of Jeroboam II, the majority of the Israelites were not thinking at all of evil days. But those days were not long in coming.

Jeroboam was succeeded by his son Zachariah. Zachariah was the fourth of the line of Jehu to sit on the throne. And he was the last—in keeping with the word of God to Jehu that his sons would reign to the fourth generation (II Kings 10:30). Zachariah reigned for a brief period of six months, when he was assassinated “before the people” by a man named Shallum. Shallum, in turn, kept the throne for just one month. Menahem, thought to be the general of Zachariah’s army, came to Samaria, slew the usurper, and reigned in his stead.

The decline of the northern kingdom, after the glory days of Jeroboam II, was rapid. On the surface it may have appeared that Israel was but the victim of adverse socioeconomic and political circumstances, aggravated by the imperialism of the world powers of the day. But the underlying cause was deeper. Israel was being cast off by her calf. The resurgence of Assyria on the inter-national scene, and the disastrously destabilizing effect of assassinations and strife within Israel itself, were judgments of God on an apostate people.

The story can be quickly told.

Assyria, with the accession of Pul, or Tiglath-pileser (his official name), engaged again in military expeditions against the nations of the Fertile Crescent. The Assyrian army, under the leadership of this Tiglath-pileser (the III), had become a powerful force. “Thestates of the west,” writes F. F. Bruce, “had never seen anything like the efficiency and speed of this army.” Rulers of the Syrian states quickly submitted and were put under tribute. Tiglath-pileser evidently invaded the northern kingdom (II Kings 15:19, 20). He “turned back” only after Menahem bought him off with a bribe of “a thousand talents of silver.” A tidy sum that was, and Menahem was able to gain by it the support of the Assyrians for his own rather tenuous claim to power in Israel. But he had become a virtual vassal of Tiglath-pileser. He raised the money for the bribe by imposing a tax of 50 shekels each on “all the mighty men of wealth” in his kingdom. The price of peace was therefore steep, and it did little to endear Menahem to his subjects.

Menahem continued to pay tribute to Assyria, as did also his son and successor, Pekahiah. Submission to Assyrian domination, however, was becoming increasingly unpopular, both in Israel and in neighboring countries. Taking advantage of the anti-Assyrian sentiment in Israel, Pekah conspired against Pekahiah, smote him in his palace, and reigned in his stead (II Kings 15:25).

Pekah at once joined a confederacy of anti-Assyrian states, and it seems that he urged Ahaz king of Judah to do the same. When Ahaz refused, Pekah king of Israel and Rezin king of Syria invaded Judah. It may be that what is recorded in II Chronicles 28:5ff. was the first part of this invasion. Judah was put to the worse.

Evidently Pekah and Rezin later returned to war against Jerusalem (Is. 7:1), with the intention of re-moving Ahaz and installing as king in Judah “the son of Tabeal” (Is. 7:5, 6), who would do their bidding. Thus would the king of Israel, if he had his way, make an end to the house of David. Such contempt there was in Israel for what had always been considered a promise of God that had Messianic implications! So diabolical a plot must have been inspired by Satan, who would have liked nothing better than to take Judah down with Israel. More particularly— the royal line. The word of God to wicked king Ahaz through the prophet Isaiah was this: “Thus saith the Lord God, It shall not stand, neither shall it come to pass” (Is. 7:7). Why not? The answer is clear from the sign that Ahaz did not want to hear: “Behold, a virgin shall conceive, and bear a son, and shall call his name Immanuel” (Is. 7:14). God will be true to His promise to the house of David. The ultimate goal of salvation in the son of David, Immanuel, the virgin-born, will be realized.

Tiglath-pileser responded by doing what he would have done even without any appeal or money from the king of Judah. He marched forthwith against the countries that formed the anti-Assyrian alliance. Very likely it was at this time that those who lived in the northern part of the country of Israel and in the territory east of the Jordan were carried into “captivity to Assyria” (II Kings 15:29).

Pekah’s policy of opposition to Assyria had therefore met with disastrous results. All that remained of the northern kingdom was the central part of the country, the land around Samaria. The Israelites who remained knew that they were doomed unless action were taken immediately to come to terms with Assyria. They were ready therefore to support the conspiracy of Hoshea, who assassinated Pekah (II Kings 15:30), had himself made king, and immediately offered his submission to the king of Assyria.

After faithfully paying tribute for several years, however, Hoshea determined to make a bid for freedom. He discontinued his yearly tribute and attempted, apparently unsuccessfully, to form an alliance between himself and so, king of Egypt (II Kings 17:4). When Shalmanezer, the new king of Assyria, learned of the conspiracy, he marched on Samaria. For three years Samaria held out against the siege (II Kings 17:5). During the course of those three years, according to surviving As-syrian records, Shalmanezer died and was succeeded by Sargon, who took Samaria and led away captive 27,290 Israelites, in order to relocate them in various parts of his empire—a policy by which the Assyrians hoped to minimize the threat of revolt by a conquered people.

Thus did the northern part of the ‘promised land’ become an Assyrian province. It took the name of what had before been the capital city of Israel, Samaria; and the people of the province were called Samaritans. A mixed race they became, for the remnant of Israel that had been allowed to remain soon intermarried with the settlers from other parts of the Assyrian Empire.

So ended the kingdom of the ten tribes. They had, some 200 years earlier, rejected the house of David, and therefore God Himself. In His anger God had given them nineteen kings, who were, without exception, wicked. During that time God sent prophets to warn them of the consequences of their evil ways. “Notwithstanding they would not hear, but hardened their necks…and they rejected his statutes, and his covenant that he made with their fathers … and they left all the commandments of the Lord their God” (II Kings 17:14-16). When at last their measure of iniquity was filled, God “removed them out of his sight” (II Kings 17:18).

The inspired writer of II Kings records the Assyrian conquest of the northern kingdom and the deportation of its people in a few short verses: II Kings 15:29, and II Kings 17:3-6. He then pauses, as it were, to reflect on Israel’s history, in order to provide what is a full and clear vindication of God’s dealing with the ten tribes (II Kings 17:7-23).

“So was Israel carried away out of their own land to Assyria unto this day” (II Kings 17:23). “Untamable perverseness” Calvin calls the wickedness of the ten tribes that called for such vengeance of God upon them. In spite of great and innumerable blessings, Israel “had feared other gods, and walked in the statutes of the heathen, whom the Lord cast out from before the children of Israel” (II Kings 17:7, 8).

“Thy calf, O Samaria, hath cast thee off” (Hosea 8:5). Perhaps the people of Israel did not, during the prosperous days of Jeroboam II, feel threatened by the prophetic warnings of Hosea. But captivity was imminent for the ten tribes—not because of failure of international diplomacy or any other apparent secondary cause, but, says Hosea, because their calf had expelled them from the land of their inheritance.

At the very beginning of Israel’s history as a separate nation, God had declared that He would “smite Israel, as a reed is shaken in the water, and he shall root up Israel out of this good land, which he gave to their fathers, and shall scatter them beyond the river…. And he shall give Israel up because of the sins of Jeroboam, who did sin, and who made Israel to sin” (I Kings 14:15, 16). Nevertheless, for 200 years “the children of Israel walked in all the sins of Jeroboam which he did; they departed not from them” (II Kings 17:22, 23).

“They have set up kings,” the Lord said through Hosea, “but not by me: they have made princes, and I knew it not: of their silver and gold have they made them idols, that they may be cut off” (Hosea 8:4). That was the Lord’s judgment of Israel’s defection from the house of David. The ten tribes had abandoned the kingdom that God had instituted for their salvation, and then perverted and corrupted the whole worship of God. Though the people of Israel could not have fully understood how Christ Himself shone forth in David and in the priesthood and in the temple, they could not have misunderstood God’s marking out the posterity of David to hold the scepter till the coming of the promised Messiah. And they knew very well that God had instituted the priesthood and prescribed the form of worship that was pleasing to Him. In rejecting the house of David, in setting up a new priesthood, and in establishing a form of worship that was of their own invention, they were willfully undermining the appointment of God and declaring themselves to be unwilling to be ruled by His hand.

And in rejecting the type, they were in effect rejecting what was typified. To shake off the yoke of David was to reject Christ as King. To make priests of those who were not of the house of Aaron, and to sacrifice, not at the altar of burnt offering in the temple, but before golden calves in Dan and Bethel, was to reject Christas Mediator.

The Assyrians, therefore, were but the “rod of God’s anger” against a “hypocritical nation” (Is. 10:5, 6). By the time the process of deporting Israelites and importing conquered peoples from other lands was completed, the ethnic identity of the northern kingdom was obliterated. Such was the final fruit of Israel’s defection from David. Their calves had cast them off.

Next time: An elect remnant. 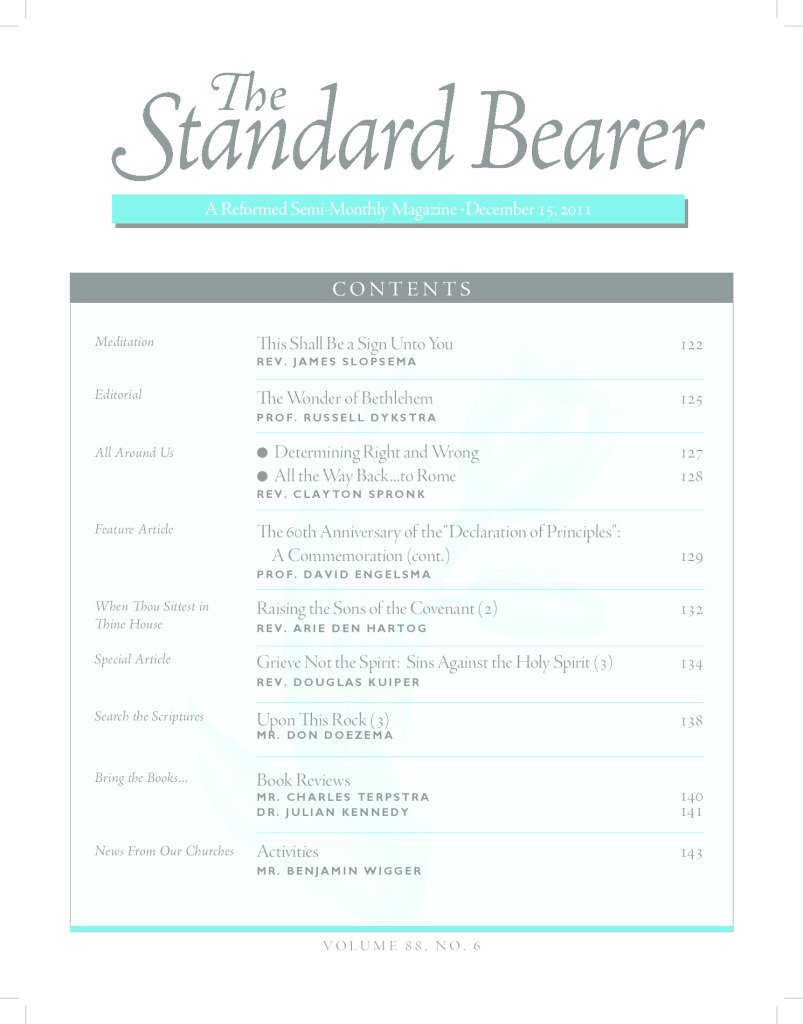