(Note: Because it has been almost a year since the last article in this series appeared in print, a quick reminder of where we were at might be helpful. We were considering the types and shadows of the old dispensation. We noted that David, in Psalm 51:16, though reflecting first of all on the place of sacrifices in his own day, was also saying something about their end in the dispensation to come. A remarkable prophecy, we said, especially in light of how difficult it was for the saints of the new to let go of the shadows of the old when the time for them was past. Witness the Council of Jerusalem, Acts 15. But just how far was David ahead of his time? That’s where we pick it up in what follows.)

Through the preaching of Paul and Barnabas, Gentiles were being brought, in droves, into the church of Christ. As Gentiles.

Lots of baptisms, surely. But not a single circumcision. Paul was preaching to the Gentiles—without a word about proselytizing. Never could that have happened, had there not been first the breaking down of a centuries-old wall.

Paul calls it, in Ephesians 2, “the middle wall of partition.” And what was that wall? Concretely, the ceremonies of the law. The sacrifices. The washings. The distinction between clean and unclean animals. Circumcision. Ah, yes, especially circumcision. Remember the challenge to Peter when he returned to Jerusalem after having gone to the house of Cornelius the centurion? “Thou wentest in to men uncircumcised, and didst [even] eat with them!” An impenetrable wall indeed. One that had stood for 2,000 years, by appointment of God. And to circumcision were added, some 600 years later, the ceremonies, which, writes Calvin, “like walls, enclosed the inheritance of God, lest it should be open to all or confused with other possessions; and thus the Gentiles were excluded from the Kingdom of God.”

Christ broke it down. By His cross (cf. Eph. 2:16). He (Christ) “hath made both [Jew and Gentile] one, and hath broken down the middle wall of partition between us” (v. 14). How? By abolishing “the law of commandments contained in ordinances” (v. 15). Again, Calvin: “Paul means not only that the Gentiles are equally admitted to the fellowship of grace, so that they no longer differ from the Jews, but that the mark of difference has been taken away; for ceremonies have been abolished” (emphasis added).

Ceremonies…abolished! That was the hard part. We quoted, last time, Herman Hoeksema, who wrote concerning the “period of transition from the old dispensation to the new” that “it was not easy completely to break away from the ordinances of the Old Testament, the law of Moses.” We can refer also to Calvin, who, having noted that prophecies had indeed foretold this new state of affairs, said that “men could not heed these prophecies without being startled by the newness of the thing that met their eyes.” And: “For it seemed completely unreasonable that the Lord, who for so many ages had singled out Israel from all other nations, should suddenly change his purpose and abandon that choice.”

And it was this that David was anticipating in Psalms 40 and 51! In them, Calvin says, David was looking beyond what was for him the here and the now, beyond his own life experiences, to “the kingdom of Christ.” And what particular aspect of that kingdom? This: “when not even the lowest place is left for the sacrifices which God strictly requires under the Law.” David, then, foresaw the abrogation of the ceremonial law—through Christ.

Or is that, just maybe, saying too much?

Truth is, of course, there is always a tension between two extremes in a study like this, between giving, on the one hand, too much credit to the saints of old and, on the other, giving them too little. The hypothetical perspective of David on the debate in the Council of Jerusalem is a case in point. David’s insights, we said last time, put him “ahead of his time.” But by how far? Were they at the level of Barnabas and Paul’s, and of James and Peter’s—all four of whom gave good direction to the Jerusalem Council? One might be inclined to think so, in light of how Calvin described the words of David in Psalms 40 and 51.

Suppose that David, in the context of the last article in this series, were present as an unseen observer at the Council of Jerusalem (Acts 15), which had been called for the very purpose of deciding the place of the Levitical rites in the calling of the Gentiles. We would expect, would we not, in light of what we have just concluded, that David would have been baffled by the goings-on. “Circumcision—necessary for salvation!? What is this all about? Why call a church council to debate something so elementary!?”

Or, again, is that, maybe, saying too much?

The question is not what we, 2,000 years post-Pentecost, can ‘see’ in David’s psalms. It’s what David could see. Or, better, with what kind of clarity did he see it?

The 53rd chapter of Isaiah is an amazing prophecy: “With his stripes we are healed.” “The Lord hath laid on him the iniquity of us all.” “He is brought as a lamb to the slaughter.” Now think of Peter’s response to Jesus’ forewarning the disciples of His imminent death: “Be it far from thee, Lord; this shall not be unto thee!” If Isaiah were at that moment to have stepped into the circle of disciples, would he have rebuked Peter? Or would he have, right along with the rest of the disciples, seconded the sentiment?

Or Moses. Jesus reminded Nicodemus of Moses’ lifting up of the serpent in the wilderness, and He said, in effect, “That was Me!” Did Moses ‘get’ that?

To the multitudes who followed Him after His feeding of the five thousand with a few loaves of bread and a couple of fishes, Jesus said concerning the manna in the wilderness, “I am the bread of life.” Did Moses get that?

And here, in Psalms 40 and 51, David speaks concerning the kingdom of Christ, when the ceremonies of the law would be terminated. If he were present at the Council of Jerusalem, would he have put an end to the debate at its beginning?

Think, here, of Jesus’ words in Luke 10:24: “For I tell you, that many prophets and kings have desired to see those things which ye see, and have not seen them….”

Prophets and kings? Yes, men of God like… Moses. And David. And Isaiah. They desired to see and, according to this testimony of Jesus, did not see.

Seems pretty clear-cut, doesn’t it? The object of their hope was hid from them. They strained, as it were, to behold it, but found it always to be just over the horizon. Or on the other side of a veil.

Paul says as much in Romans 16:25 when he writes that the gospel of Jesus Christ, which he designates a mystery, was “kept secret since the world began.”

And, writes Calvin in his Institutes regarding the verse from Luke 10 quoted above, “No one then [that is, in the dispensation of shadows] possessed discernment so clear as to be unaffected by the obscurity of the time” (emphasis added).

However, Jesus also said this: “Your father Abraham rejoiced to see my day; and he saw it and was glad” (John 8:56). What is this? Is Jesus declaring that, whereas David and Isaiah could not see that for which they yearned, Abraham could?

Interestingly, Calvin in one of his commentaries speaks to the relationship of those very statements of Christ. He writes:

But the question now arises, How, even with the eyes of faith, did Abraham see the revelation of Christ? It does not seem to fit in with another of Christ’s statements: ‘Many prophets and kings desired to see the things which ye see, and saw them not’ (Luke 10:24). I reply, faith has its degrees of seeing Christ. The ancient prophets beheld Christ afar off, as He had been promised to them….

More of course can, and perhaps should, be said about that ‘seeing,’ but let me just say this for now, that it’s those “degrees” that give point to Rev. G.M. Ophoff ’s observation, referred to before, that determining the level of the Old Testament saints’ comprehension of the ‘mystery’ necessarily involves conjecture.

Which means that a good deal of caution is in order in our trying to grasp it. Plus a carefulness to limit ourselves to what the Word of God actually reveals. What will that mean with respect to the matter at hand—that is, the matter of David’s perspective on the debate in the Jerusalem Council of Acts 15?

Psalm 51 is one of the penitential psalms of David. He is here reflecting on his grievous sin with Bathsheba and Uriah. Without any doubt, God used that fall into sin to bring David to a point where the words of the psalm would come from the very depths of his soul. Empty-handed he came to God (v. 16). And it would be inconceivable to suppose that David could have been saying, “I come to thee, O Lord, with nothing in my hand; but please note that I’m circumcised.” Absolute destitution of merit—that’s what his words convey. Which means this, as far as the Council of Jerusalem is concerned, that David would have had no sympathy whatever for the thinking of the Judaizers that “except ye [Gentile converts] be circumcised after the manner of Moses, ye cannot be saved” (Acts 15:1).

Then there’s that all-important question of where Christ fits into the picture. David, in Psalm 51:16, makes no mention of Christ. But we can be sure that He is in there. For, what were the sacrifices if they were not schoolmasters all, to lead the saints of old to Christ. And there can be no question that they accomplished that purpose in the heart of the man after God’s own. “Thou desirest not sacrifice”? Surely there are implications there for the future. But David was thinking first of all about the present. Then and there, a sheep with a slit throat on an altar meant to God… nothing. But what it symbolizes did. And that was Christ. David knew it. That is, though the when and the how remained a mystery, David was sure of the that. Even, therefore, from his 1000 B.C. perspective, David would have been in full agreement with Peter’s testimony to the Jerusalem Council that “through the grace of the Lord Jesus Christ we shall be saved” (Acts 15:11). That is, only by that grace—since Peter had disavowed works in the previous verse. To that, David would have given his hearty “Amen.”

But would David have been able to anticipate, with equal certainty, the judgment of the Council on the broader question of how the Levitical system figures into the proclamation of the gospel to the Gentiles, and, for that matter, on what, if any, significance of the Mosaic law remained for the church of the new age? I can well imagine David thinking, “Hmm, I had never really thought of that before.”

David, in other words, could not have written Hebrews chapter 10, or co-authored, with Guido deBrès, Article 25 of the Belgic Confession. That’s because he could not have known the termination of all the shadows, in one fell swoop, at the cross. Yes, the cross. He would have had to learn that reality, right along with Jesus’ disciples, by the event—or, more precisely, by Jesus’ opening their understanding, “so that they might understand the scriptures” (Luke 24:46) in light of the event. 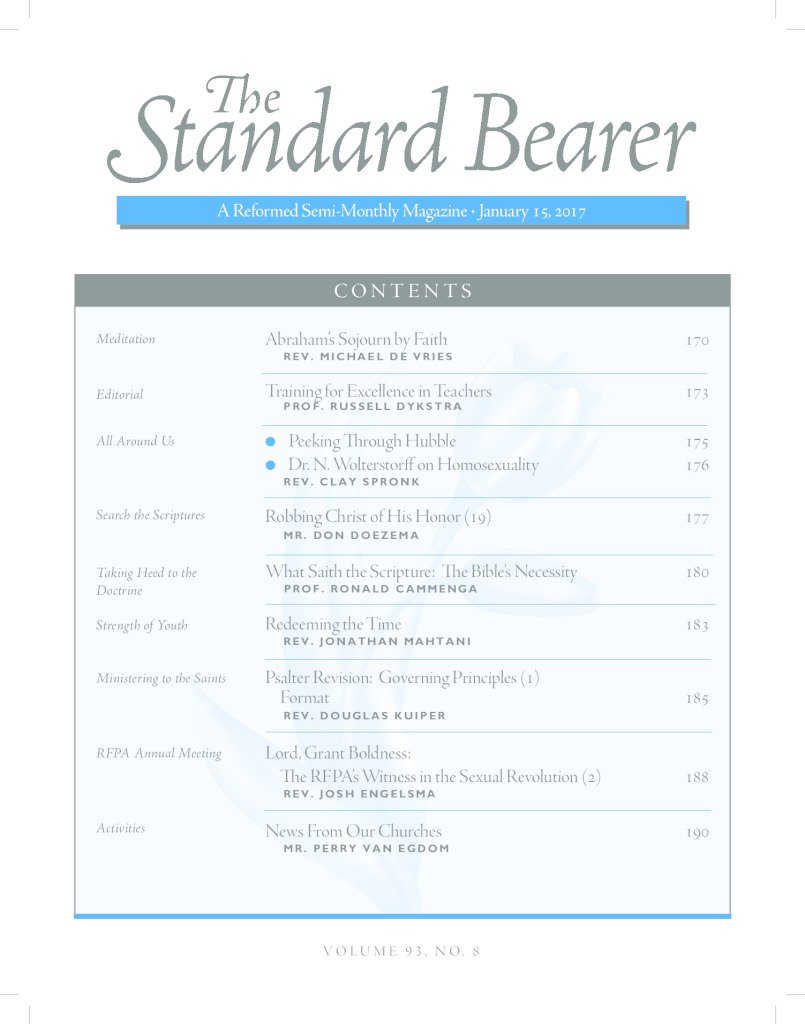