David, we said, was foreseeing in Psalm 40 and Psalm 51 the Gospel age, when not even the lowest place would be left for any of the rites that were strictly required under the Law. Not only, therefore, was he embracing the Antitype, but he was also dismissing the types. All of them. And that, as we pointed out, was no little thing. Whether we view it from the perspective of what went before, or of what came after, we see David standing as it were on a mountaintop in Psalm 51.

When we think of such ‘mountaintops,’ our minds turn quickly and easily to passages like Isaiah 53. Surely Isaiah 53 is among the highest, if not itself the highest, of the peaks in the dispensation of shadows. But we ought not overlook Psalm 51.

Isaiah, living still among the ‘shadows,’ among which were daily sacrifices for sin, foresaw the day when a single sacrifice would accomplish what the blood of bulls and goats could not. “He was wounded for our transgressions, he was bruised for our iniquities: the chastisement of our peace was upon him; and with his stripes we are healed” (53:5). David, though not foreseeing the Antitype with the clarity of an Isaiah, was able nevertheless to prophesy of the day when there is no place left for the rites of the Law. “Thou desirest not sacrifice,” says David. And: “The sacrifices of God are a broken spirit and a contrite heart” (51:16-17). Thus, writes Calvin, “David represents contrition of heart as comprehending in itself the whole sum of acceptable sacrifice.”

Notice that: “contrition…in itself… the whole sum of acceptable sacrifice.” Notice, too, that David is here giving expression to his own approach to God after his grievous fall into sin. Not, in other words, is he speaking only of some future state of affairs when the whole apparatus of ceremonies will be forever discarded. His point of reference was what for him was the here and the now. This man after God’s own heart wanted, more than anything else, to be “washed” from his iniquity (v. 2), “cleansed” from his sin (v. 2), and “delivered” from bloodguiltiness (v. 14). With a view to that, what value could there be in a sin offering, in itself, at the tabernacle? What efficacy was there in the blood of a goat, in itself, to attain for David a restoration of the joy of salvation?

David provides the answer in verse 16. It is nothing. Zero. What is the “whole sum” of acceptable ‘sacrifice’? A contrite, humbled heart. And the hands? They are, and must be, empty. Which is exactly what the blood of bulls and goats was intended to teach the saints of old. Had there been efficacy in those sacrifices, asks the writer to the Hebrews, “would they not have ceased to be offered?” (10:2). The very necessity of repetition demonstrated the impotence of that blood to accomplish the remission of sins. Thus did the sacrifices, along with all the other rites and ceremonies of the old dispensation, lead God’s people to abandon all trust in their own works and prostrate themselves before God in supplication for His mercy—which they understood to be the essence of His promise of a Savior. Those sacrifices served therefore a very useful purpose in the life and worship of the saints of old. It is for that reason that, as we mentioned last time, “we must come to the kingdom of Christ for it to be completely true that God does not wish sacrifice” (Calvin). And it is this eventuality, the termination of all the types when they reach their fulfillment in the Antitype, that David was anticipating by prophecy in Psalm 51.

Remarkable, we say, in light of what went before and what would come after. Note God’s command to Abraham: “He that is born in thy house, and he that is bought with thy money, must needs be circumcised: and my covenant shall be in your flesh for an everlasting covenant. And the uncircumcised man child whose flesh of his foreskin is not circumcised, that soul shall be cut off from his people; he hath broken my covenant” (Gen. 17:13-14). And God’s command to Israel through Moses: “It shall be a perpetual statute for your generations throughout all your dwellings, that ye eat neither fat nor blood” (Lev. 3:17, emphasis added).

Today, of course, we understand, and express in Article 25 of our Belgic Confession, that it is the “truth and substance” of the shadows that are everlasting and that remain with us in perpetuity. Not the shadows themselves. But what came after David, at the time of the actual transition from the old to the new covenant, shows that what we confess today and what David was foreseeing and rejoicing in, in Psalm 51, was not quickly and easily grasped in the apostolic age.

In our last article we began considering some of the evidence of that difficulty. Understandably, it was the place of the rite of circumcision in the church of the new dispensation that was first called into question, especially as it related to obedience to Christ’s commission to preach the gospel “unto the uttermost part of the earth.” Paul and Barnabas, on their return from their first missionary journey into Gentile lands, reported to the church in Antioch how God had “opened the door of faith to the Gentiles” (Acts 14:27, emphasis added). Faith, that is, to the uncircumcised. In keeping with what Peter had been taught on the housetop of Simon the tanner in Joppa, Paul had made no attempt to make Jews out of the Gentile converts, by proselytization. And this brought opposition. “Certain men came down from Judea” and insisted that circumcision “after the manner of Moses” was a prerequisite for salvation (15:1).

What followed was “no small dissension and disputation” (15:2). Truth is, the very fruit of the work of the missionaries should have settled the matter. Paul, after all, can preach, but only God can work faith. “Therefore,” says Calvin, “Paul and Barnabas show by the results that their calling was approved and ratified by God, for the faith of the Gentiles [uncircumcised] was as if a seal had been imprinted by the hand of God, in order to confirm it” (emphasis added).

But not even that seal was enough to persuade the dissenters—the Judaizers—from Jerusalem, who must have argued simply that the Law is the law. And that was unsettling to the church in Antioch. ‘Troubling,’ according to 15:24, and a ‘subverting of souls.’ So much so, that it was decided to send Paul and Barnabas “and certain other of them” (v. 2) to Jerusalem, in order that the question might be addressed by “the apostles and elders.”

That was the occasion for what is often called the Council of Jerusalem. What was it that was ‘on the table’ at this assembly? Really, all of the Levitical requirements. And how they figured into the calling of the Gentiles. And what were the implications of that for the church of the new dispensation. How important Luke considered the question to be is evident from the fact that he devoted nearly all of chapter 15 to its resolution.

What was at stake? The Judaizers, we must understand, in their insistence on the necessity of circumcision, were making of this sign a meritorious work—which it had never been. Witness Psalm 51:16-17. “Nothing in my hand I bring” could have been sung by David. “Thou desirest not sacrifice.” “The sacrifices of God are a broken spirit.” The writer of the epistle to the Hebrews in fact quotes David. Have you ever noticed how much of the rest of Hebrews 10 accords with what must have been the sentiments of this Old Testament prophet? “Lo, I come to do thy will, O God”—these are of course the words of Christ in David, in Psalm 40; and David could not know how the Christ would fulfill that “will” of God. But David was sure that He would come, and that He would do what the blood of bulls and goats could not do, namely, “take away sins” (10:11, emphasis added). And that by the “one offering” that He would bring, He would “perfect forever them that are sanctified” (10:14). And that “where remission of [sins] is, there is no more offering for sin.” And then this: “Having an high priest [the Antitype] over the house of God; let us draw near with a true heart in full assurance of faith, having our hearts sprinkled from an evil conscience, and our bodies washed with pure water.” Washing? Yes. Not, as it were, with H2O. But with pure water. Which accords with the nature of Christ’s kingdom. Calvin’s comments on those verses (20 and 21) in Hebrews 10 are so good. “There must,” he says, “be mutual concord between Priest [with a capital P] and people.” We are therefore “to bring [to God] nothing which does not correspond [to it].” “Outward washing of the flesh must therefore be done away with and the whole apparatus of the ceremonies must cease.”

To all of that, David would have given a hearty Amen. Witness Psalm 51.

But the Judaizers thought otherwise. And a good number of others among the Christians in Jerusalem were unsure. 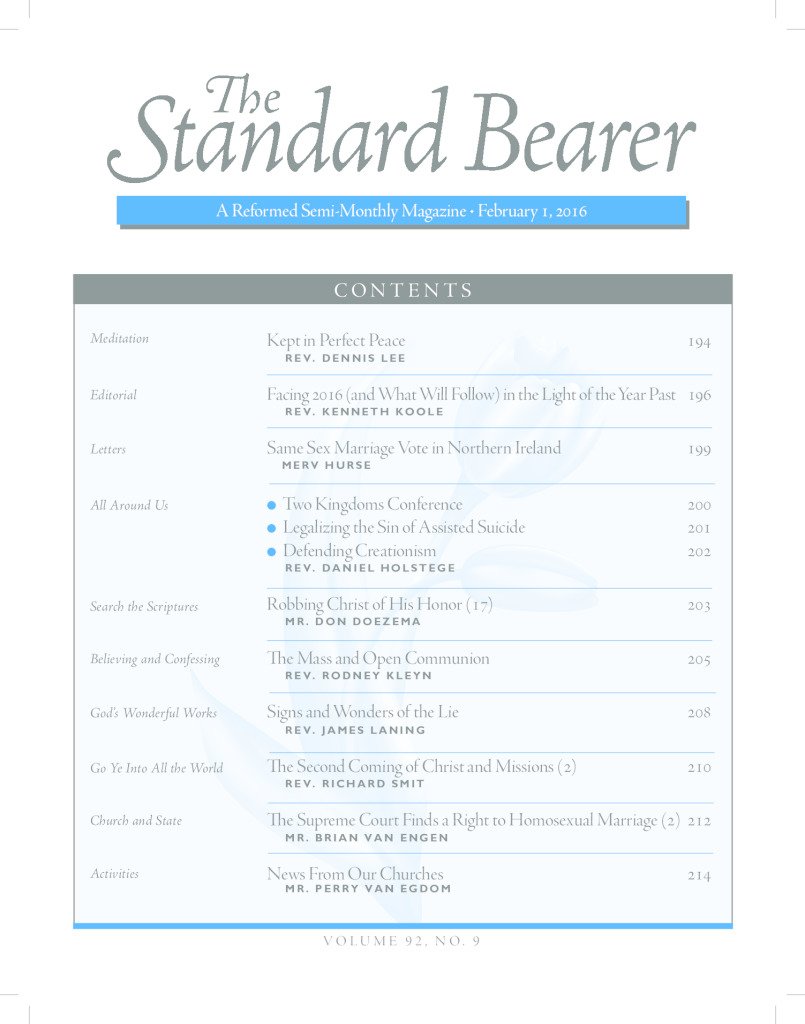