Who, in his right mind or even not quite so, would ever try to teach something of the beauty of a symphony by Beethoven, or a piano concerto of Mozart… to a donkey?

Have you taken a moment to ponder that? Then think of this, from John Calvin:

What must be “carefully attended to,” he writes in his commentary on I Corinthians 1:20, is that “man with all his shrewdness is as stupid about understanding by himself the mysteries of God as an ass is incapable of understanding musical harmony.”

Earlier this week, I visited an elderly saint, long active in the church, now under hospice care. We talked about… heaven. What we know about heaven. What we do not know. And what we cannot know. Reminded me of Calvin’s analogy. Surely the things of heaven are as far beyond our ken as Beethoven’s music is beyond the ability of an ass to appreciate. Eye hath not seen. Nor ear heard. Neither have entered into the heart of man, the things of… heaven.

That those words of Paul in I Corinthians 2:9 can be made to apply to heaven is clear on the surface. Streets of gold? Gates of pearl? We know very well that heaven will have no gold. Heaven will have no pearls. At least, not as we know them in the here and now. For the very “elements” of this old world are going to “melt with fervent heat.” Not in order that they be annihilated, but transformed, for existence in a reality that is beyond the comprehension of our earthly senses.

What then? Will the gates be of transformed pearl, and the street of transformed gold? Fact is, the verse in Revelation 21 that speaks thus is not John’s vision of the new heavens and the new earth as such but of the glory of the church in her triumphant, perfect state, under the figure of a celestial city. And when John does speak of heaven itself, he does so metaphorically. Out of necessity. Because the earthly is all that our finite minds can get a hold of. (The elderly saint to whom I referred above expressed his confidence that, when he opened his eyes in glory, no longer limited by finitude, he would find himself not bewildered, but… home.)

Think of that symphony of Beethoven. Played on a radio… in a barn. Calvin’s analogy works, does it not, when we consider our ability even to imagine “the things which God hath prepared for them that love him”… in heaven.

But did you notice that when the apostle Paul wrote of those things that eye hath not seen, nor ear heard, and have never entered the hearts of men, he did not have in mind heaven? At least, not specifically so. Our minds, I think, often instinctively go to that (heaven) when we ponder I Corinthians 2:9. Which is understandable, because heaven does indeed belong to those “things which God hath prepared for them that love him,” and because we so much ‘get’ the limitations of earthly senses and finite minds trying to grasp a reality that is so totally ‘other.’ The context, however, makes it clear that Paul is speaking of something different. “We speak,” he writes, “the wisdom of God” (v. 7). A wisdom wrapped up in “mystery.” A “hidden wisdom.” A wisdom that “none of the princes of this world knew; for had they known it, they would not have crucified the Lord of glory.” And, in chapter 1, verses 23, 24, a wisdom that is, essentially, “Christ crucified.” In other words, the gospel. A gospel preached by Paul (1:17). And believed by us (1:21). With our… finite minds.

Not, you see, quite like heaven, which, in the very nature of the case, is beyond the reach of our earthly senses. Paul, however, is referring to more than that. As is Calvin. It is concerning the gospel itself that Calvin says that man has, with respect to it, all of the abilities of an ass listening to classical music. I couldn’t help but wonder if Calvin might, here, be exaggerating a little, for the sake of emphasis. After all, hardly can it be said that Genesis 3:15 was unintelligible to Adam and Eve. And when Jesus, in the upper room after His resurrection, “breathed on” His disciples (John 20:22), it was not new powers of intellect that He imparted to them. He opened the understanding (Luke 22:45) of their still very much finite minds so that they could understand how Genesis 3:15 was fulfilled in Him. The mystery that had been “kept secret since the world began” was at long last revealed (Rom. 16:25). And with our earthly senses and finite minds we too lay hold of it. “A mystery,” as Rev. Herman Hoeksema once wrote, “is not anything that is contrary to our understanding, some incomprehensible thing that we may never know, which we can never grasp, of which our human understanding can never lay hold.” We are not, in other words, so it would seem, as stupid as asses.

Calvin’s analogy, however, cannot be so easily dismissed, as if it were in fact nothing more than hyperbole. Truth is, one would be hard pressed to come up with an analogy more apt with respect to the revelation of “the mystery.” And Calvin does not contradict Hoeksema.

Perhaps if I were to reread previous articles in this series I would discover that we’ve already touched on this matter. But in my pondering, now, of the first two chapters of I Corinthians, I find myself wondering if I had, before, gotten to the bottom of it. And maybe that’s because one of the delightful features of ‘searching the Scriptures’ is that one can never reach the ‘bottom.’ That is why this series, which I had anticipated to be short, is turning out to be not quite so. I find myself wondering still about questions like these: What exactly is the nature of that mystery? Why, and how, was it kept “hidden” for 4,000 years? What, exactly, was it that constituted robbing Christ of His honor in the old dispensation? How can it be said that, had the “princes of this world” known the “mystery” they “would not have crucified the Lord of glory”? And what does all this mean for us?

I hope you can bear with me, therefore, as I conclude this article with yet another “…to be continued.” 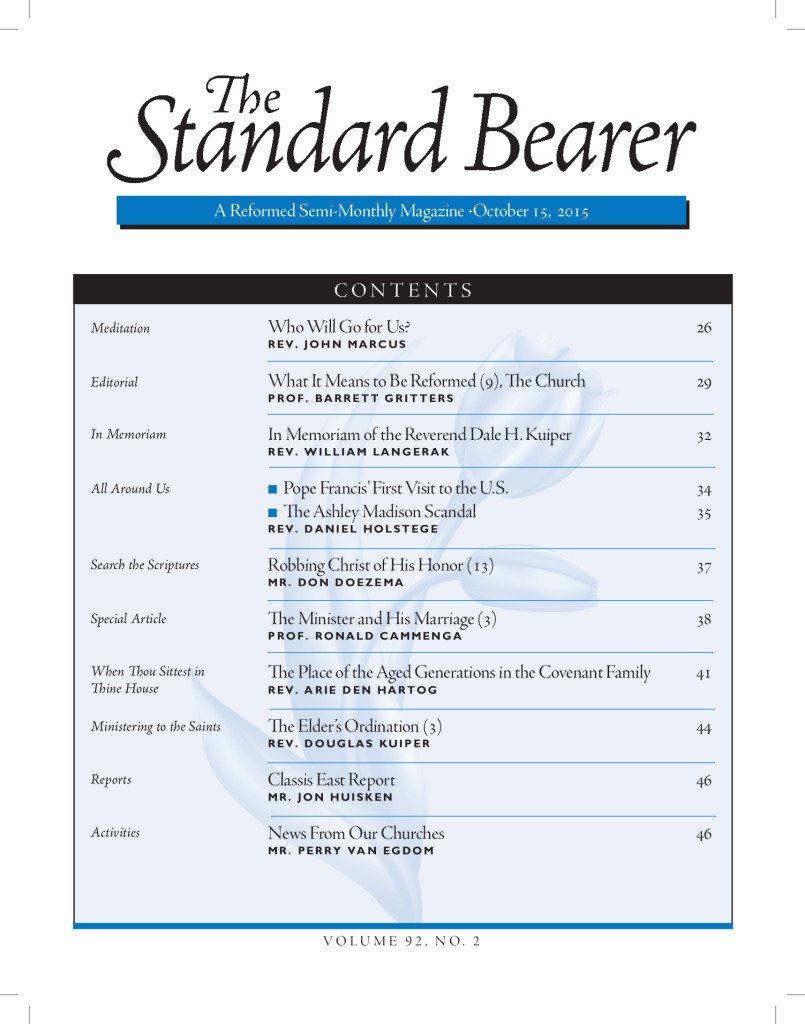