Upon This Rock (2): The Prophets Hosea and Amos

Upon This Rock (2): The Prophets Hosea and Amos

As we saw last time, the prophet Jonah’s testimony to backslidden Israel occurred probably during the first part of the long reign of Jeroboam II. During the latter part, God spoke through Hosea and Amos. Assyria was the world-power most to be reckoned with at that time, but its kings were then so preoccupied with internal problems that they abandoned temporarily their policy of expansion. Israel was able therefore to enjoy a period of peace and prosperity unparalleled in the 200-year history of the ten tribes.

A peace and prosperity, it was, that led to further spiritual decline. Hosea and Amos were very likely making reference to that prosperity in passages such as Hosea 12:8 and Amos 6:4-6. “Ephraim said, Yet I am become rich, I have found me out substance.” In spite of, or perhaps, rather, because of the luxury enjoyed by the people of Israel, this was a time of increasing apostasy. They rejected the message of the prophets that God continued to send. They denied that the Lord gave them their plenty (Hos. 2:8); they burned incense to Baalim (Hos. 2:13); they were guilty of “swearing, and lying, and killing, and stealing, and committing adultery” (Hos. 4:2); they oppressed the poor (Amos 4:1); “they knew not to do right” (Amos 3:10); they attributed their wealth to their own strength (Amos 6:13).

At the same time, they were apparently scrupulous in their observance of religious rituals. For the Lord declared, “I hate, I despise your feast days, and I will not smell in your solemn assemblies. Though ye offer me burnt offerings and your meat offerings, I will not accept them: neither will I regard the peace offerings of your fat beasts. Take thou away from me the noise of thy songs; for I will not hear the melody of thy viols” (Amos 5:21-23). Insincere it all was, besides being unsanctioned, in that the form of worship was an invention of Jeroboam I.

What did lie in the future for God’s people? This: “I will bring again the captivity of my people Israel” (Amos 9:14). And: “They that dwell under his shadow shall return” (Hosea 14:7).

How the people of God, true Israel, needed to hear that! Were it not for those words of hope, all would indeed seem to be lost. “The eyes of the Lord God are upon the sinful kingdom, and I will destroy it from off the face of the earth…. For, lo, I will command, and I will sift the house of Israel among all nations, like as corn is sifted in a sieve” (Amos 9:8, 9). What could that mean but that the nation of Israel would be obliterated? But then, this: “In that day will I raise up the tabernacle of David that is fallen, and close up the breaches thereof; and I will raise up his ruins, and I will build it as in the days of old: that they may possess the remnant of Edom, and of all the heathen, which are called by my name, saith the Lord that doeth this” (Amos 9:11, 12).

An astounding prophecy! But what did it mean?

On the surface, it would appear as if the prophet spoke of a literal return of the people of Israel to their land, and a likewise literal restoration of the house of David and expansion of the boundaries of the Davidic kingdom. In light of subsequent history, however, it is clear that that could not have been the meaning of this prophecy of Amos. The northern kingdom was never reestablished in the land of Canaan. And hardly was the restoration under Zerubbabel a revival of the glory days of Israel under David and Solomon. Something else, therefore, must have been in the view of the prophet here.

Appropriately, we look to the New Testament Scriptures for insight into the Old. And we are not disappointed. For in this instance we find direct reference to this prophecy of Amos in the book of Acts. In Acts 15:13-17, James explains that the “building again of the tabernacle of David,” and the “building again of the ruins thereof,” is nothing less than the “Gentiles seeking after the Lord.” And James added, significantly, “Known unto God are all his works from the beginning of the world” (v. 18). In other words, out of the ruins of the house of David comes the glorious kingdom of David’s greater son—which was God’s purpose from the beginning! Yes, the Messianic kingdom! As hope faded for the backslidden northern kingdom under the godless rule of Jeroboam II, it was the Messianic kingdom that came into ever clearer focus in the prophecies of Hosea and Amos. Which was as it should be. No hope could there be for the people of Israel in themselves. Only judgment. Only sifting. Only ruin.

And yet, when all seems lost, when the tabernacle of David has fallen, when the house of David is just a stable in Bethlehem, then, then, says the prophecy of Amos, “I will raise up his ruins.” A reference, surely, to Christ. For only in Him will the boundaries of Israel, once confined to a small area just east of the Mediterranean Sea, be enlarged to encompass those of every nation, tribe, and tongue “which are called by name” (Amos 9:12). And only in Him can that kingdom be everlasting (Amos 9:15).

Did the prophets themselves understand their prophecies? In his own experience in the whale’s belly, did Jonah see the burial and resurrection of Jesus? In their own prophecies of the downfall and restoration of Israel, did Hosea and Amos see the rising of a new, spiritual Israel out of the ruins of the old? No. At least not with any clarity. The apostle Peter explains that the prophets of the old dispensation were left to “search diligently” concerning the meaning of the Spirit when He “testified beforehand the sufferings of Christ, and the glory that should follow” (I Pet. 1:10-12). We see it. The prophets couldn’t. But one thing they did know, and one thing they could testify to the people of God in Israel: God will be true to His promise. The faithful will be led away into captivity in Assyria right along with apostate Israel. But all will not be lost. The “tabernacle of David” will fall. But God will raise it up. And the glory of the new will far surpass that of the old. Think Genesis 3:15. And Genesis 15:5. And Genesis 22:18. And II Samuel 7:16. Known unto God are all His works from the beginning of the world.

Next time: Cast off by their calf. 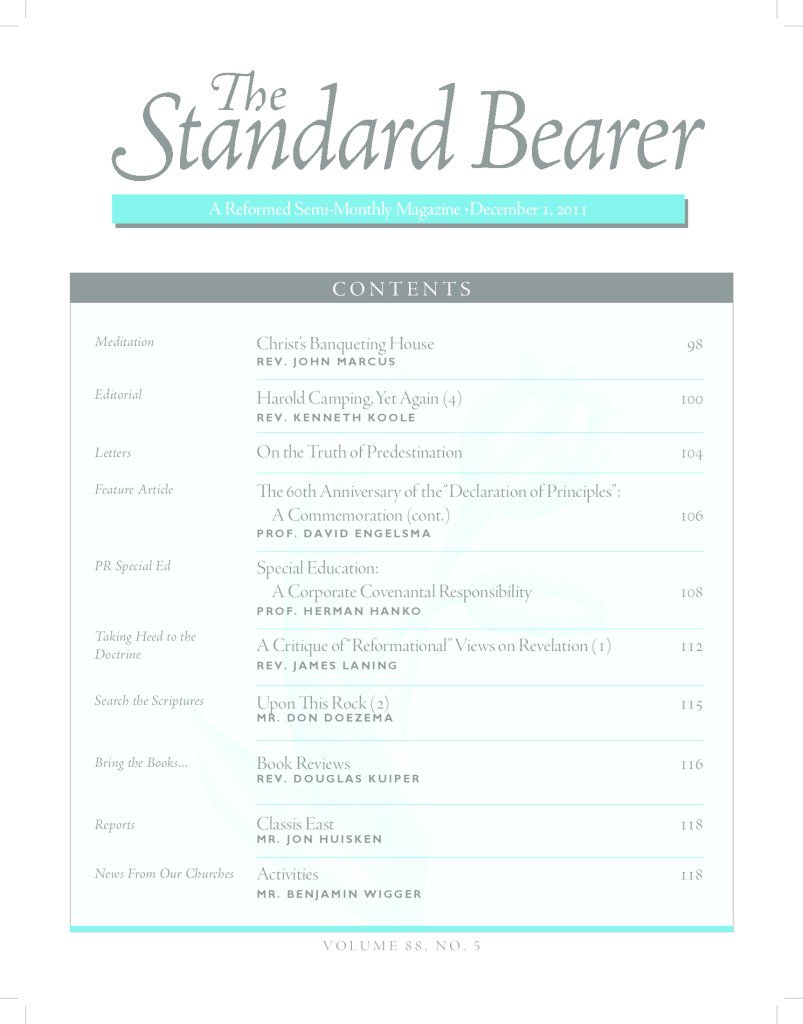