This writer has long prepared lessons for the study of Bible history in the Sunday Schools of the Protestant Reformed Churches in America. Some of that material (written originally more for Sunday School teachersthan for Sunday School students) has recently been collected and printed in a three-volume set of books entitled Upon This Rock. The books cover New Testament Bible history. Given opportunity, now, to write a series of articles for “Search the Scriptures” in the SB, I’ve decided to focus again on the very beginning of that history. You may be sure, however, that what appears on these pages will not be just a reprinting of the first chapters of Upon This Rock. It will be the fruit of additional study, and my hope and prayer is that you, the reader, will share some of the benefit that I have already derived from it.

I would like, however, to begin by reflecting briefly, in the first installments, on a bit of Old Testament history, specifically the end of the nations of Israel and Judah—not for its own sake, but for the perspective that the Old gives to the New. For it is out of the scattering of the people of Israel and the ruins of the house of David that there comes the glorious kingdom of David’s greater Son. First, then, Israel—that is, the Israel of the ten tribes, the northern kingdom. We pick up the history in the days of Jeroboam II. Of special interest to us in this history will be the testimony of the prophets. We think immediately, of course, of Elijah and Elisha. Their ministry, you will remember, had brought no national repentance to Israel. Not yet, however, would God remove the ten tribes “out of his sight.” Nor, with the death of Elisha, did He leave them without witness. For it was very likely in the latter part of the reign of Jehoash and the early part of the reign of his son Jeroboam (II) that Jonah prophesied in Israel. As foretold by this prophet (Jonah), Jeroboam recovered territory that had been lost to Hazael king of Syria, thus restoring the boundaries of Israel in the north to the point to which it had extended during the time of Solomon (II Kings 14:25).

Interestingly, a powerful testimony of Jonah to Israel came about through his preaching in another country. We refer, of course, to Assyria, one of the two great powers in the world at that time (the other being Egypt) that were a threat to the independence of Israel and its neighboring states. Syria had already suffered at the hand of Assyria, and records discovered on Assyrian monuments suggest that, some 30 or 40 years earlier, Jehu king of Israel too had been obliged to pay tribute to the king of Assyria. The growing threat of Assyria, in fact, would soon bring long-time enemies Syria and Israel together in a defensive alliance. It was into this enemy territory that the Lord sent His prophet Jonah the son of Amittai (Jonah 1:1, 2).

The capital of Assyria was Nineveh. It was a great city—having a “circumference of about 60 miles,” according to Fairbairn. It was surrounded by walls that “were 100 feet high, and so broad that three chariots could be driven abreast on them.” It was, further, a city that had been enriched by the plunder taken from conquered countries and from the tribute paid by subject nations. So rich was it that there seemed to be “none end of the store” of its gold and silver (Nahum 2:9). In addition, it was an exceedingly wicked city. According to the word of God to Jonah, “their wickedness is come up before me” (1:2). And the prophet Nahum spoke of it as a “bloody city…full of lies and robbery” (Nahum 3:1).

It was to this great and wicked city, the capital of a people who would one day destroy Samaria and enslave the people of Israel, that Jonah was sent. “Arise,” the Lord said, “go to Nineveh, that great city, and cry against it; for their wickedness is come up before me” (1:2).

And Jonah did not want to go.

Why not? Why did Jonah not want to go to Nineveh? Was it, perhaps, fear? That would be easy to understand and appreciate, for the Assyrians had a reputation for cruelty—especially with respect to their treatment of conquered peoples. Add to that the fact that Nineveh was a city of exceedingly wicked people who, as far as Jonah could tell, had not the slightest respect for the commands of God. For Jonah, a foreigner, to cry against that city on account of its corruption could only, it would seem, expose him to the mockery and persecution of those wicked idolaters. If he met with little sympathy in Israel, what could he expect from Assyria?

That it was therefore a formidable assignment is plain enough. But it is evident from his own testimony that fear cannot have been the main reason for his disobedience. He said that he fled unto Tarshish because “I knew that thou art a gracious God…and repentest thee of the evil” (4:2). Further, we read that, in the end, it “displeased Jonah exceedingly” that God had spared the city (4:1). It seems, therefore, that Jonah anticipated that, as a result of his testimony in Nineveh, some would repent (for why else would the Lord send him?). He understood, too, that the repentance of some would result in the sparing of the entire city. And since Jonah keenly desired that the city, rather, be destroyed, he fled “from the presence of the Lord” (1:3).

But why was the prophet so bent on the destruction of Nineveh that he disobeyed a direct command of the Lord? Part of the reason may have been, as some suggest, that Jonah, whose primary concern was the well-being and security of Israel, could hardly have hoped that God would spare Nineveh, the capital of the people who constituted the greatest threat to the continued existence of Israel. It is not likely, however, that Jonah’s concern for Israel was for nothing more than its physical security. As a true prophet of the Lord, which Jonah certainly was, he desired, more than anything else, that Israel repent. He may then have hoped for the destruction of the city of Nineveh in order that it might serve as a striking example of God’s judgment, and that the people of Israel might be moved thereby to recognize the seriousness of their own sin.

Closely connected with the prophet’s jealousy for Israel would be his inability to comprehend a mission to a heathen nation. Jonah knew well the promise of God to father Abraham. And, indeed, for hundreds of years God had manifested His love to only one people, namely, the people of Israel. And all other nations showed themselves to be enemies of God and of His people. There were, of course, numerous examples of Gentiles who had become Jewish proselytes, but the fact is that Jonah’s preaching of the word to a heathen people would be a unique experience in Old Testament history. The distinction that God made between peoples in the old dispensation was real. In His sending of Jonah to Nineveh God was, in effect, making an exception to His own rule. Jonah could not, and did not, understand that. To the prophet, with his understanding of God’s method of dealing with men, the mission seemed so very wrong. Jonah’s confusion and resulting reluctance to go to Nineveh were, in that light, rooted in his love for the people of God.

If Jonah’s dilemma has a New Testament counterpart, it would be the experience of Peter described in Acts 10and Acts 11. We read there that the apostle was prepared, by a vision, for the arrival of messengers from Cornelius, an uncircumcised Gentile centurion. He saw a vessel like a sheet let down to earth, wherein were all manner of animals, and he heard a voice saying, “Rise, Peter; kill, and eat.” Twice this was repeated. And each time Peter resisted: “Not so, Lord; for I have never eaten any thing that is common or unclean.” Not unlike Jonah’s “I will not go to Nineveh.”

For centuries the seed of Abraham had been the special heritage of God. The Jews had come to think that God Himself was bound by this distinction between peoples, and that Gentiles, unless they became Jewish proselytes, were forever outside the kingdom. But the command of God was clear: “Rise, Peter; kill, and eat.” Strictly speaking, the vision had to do with unclean animals. But Peter learned soon enough that the lesson had to do with men. Even to the apostle, that was a revolutionary revelation. Through the messengers from Cornelius God was opening for Peter the door to the Gentiles. That of which Jonah’s preaching to the Ninevites was a prefiguration was about to become reality. And Peter, post-Pentecost, had virtually to be pushed through the door. Hardly surprising, then, that Jonah, some 800 years earlier, and pre-Pentecost, needed a great fish to set him on his way to Nineveh.

We believe, especially on the basis of Christ’s testimony concerning them, that the repentance of some of the Ninevites at the preaching of Jonah wasunto salvation. There were, then, people of God who were living in the spiritual darkness of this Gentile city. It was for their sakes that God sent a prophet to Nineveh.

Of special interest, of course, is that God Himself hadplaced them there. And He did so in order that this whole history might serve as instruction for Israel. There was first of all the typical significance of Jonah’s having been three days and three nights in the belly of the fish. A type he was of Christ, who would be “three days and three nights in the heart of the earth” (Matt. 12:40). And then there was that amazing conversion of Assyrians in Nineveh. The ten tribes were soon to be cast out of their inheritance and scattered over the face of the earth, never to return. For they continued obstinate and unrepentant in the face of repeated warnings from the prophets and in spite of the fact that many signs and wonders were wrought among them. By contrast, on the basis of a single sermon and sign of Jonah, the Ninevites repented. What a powerful testimony against Israel. How inexcusable was their impenitence.

So also was that repentance of the Ninevites for the condemnation of the Jews of Jesus’ day. “The men of Nineveh shall rise in judgment with this generation, and shall condemn it,” said Jesus to the scribes and Pharisees, “because they repented at the preaching of Jonas; and, behold, a greater than Jonas is here” (Matt. 12:41).

But would the scattering of the ten tribes mean that God had forgotten His covenant with Abraham, Isaac, and Jacob? Would the captivity, later, of Judah mean that God’s promise had come to nothing? When the apostasy of the nation of Israel, the natural descendants of Abraham, would reach its ultimate fulfillment in the rejection of the Christ, and Israel as a nation would be destroyed by the Romans, would God then be left without a people? The repentance of the Ninevites speaks to this too. For it was a picture of the ingathering of the Gentiles. It prefigured the time, after the resurrection and ascension of Christ, when the gospel would be proclaimed to the Gentile world, and God’s elect would be gathered out of every nation, tribe, and tongue. The true children of Abraham—saved.

Yes, although scattering and captivity lay in the future for both Israel and Judah, a remnant would be saved. The Christ would come. And He would die. But out of death…life. God’s covenant with Abraham, Isaac, and Jacob is sure. The prophet Jonah, the great fish, and the repentance of the Ninevites were God’s pledges of the truth of that.

Next time: The prophets Hosea and Amos. 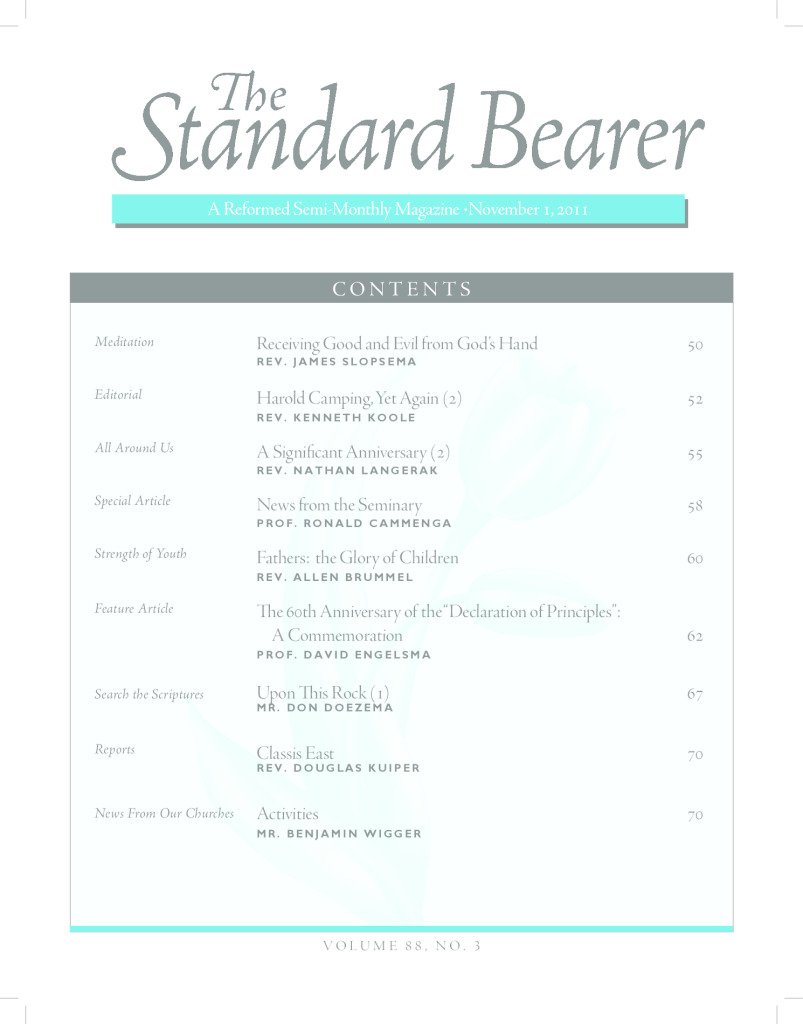