Christianity Today (CT) reported that the “12.5-million-member UMC has been in a standoff over LGBT issues for decades, culminating in a vote in favor of its traditional position against same-sex marriage and gay clergy during a special session last year. As a result, some left the UMC, some continued to defy the UMC positions outright, and some challenged the legality of the vote in the denomination’s court—ultimately putting the question of how to move forward before the delegation once again in 2020.” There is a biblical way to deal with those who hold positions that are contrary to the Bible and who transgress the 5th commandment by rebelling against the decisions of the church. But the UMC has chosen a political approach to their division rather than a biblical one.

The CT report explains the intention of the denom­ination to implement a “Protocol of Reconciliation and Grace Through Separation.” This Protocol, “the result of months of negotiation…creates a quick, ‘clean break’ for a new, traditionalist denomination that has yet to be created but will receive a $25 million sum at its incep­tion.” As a political document the Protocol includes a “moratorium” on charges of sin against those who are guilty of sin related to homosexuality. I say this is a political proposal because I have yet to find any biblical support for a moratorium on exercising Christian disci­pline for impenitent sin. For more on the details on the Protocol I leave it to the interested reader to look up the CT article.1

Writing for First Things, Carl R. Trueman provided an insightful critical analysis of the division in the UMC, with the criticism aimed especially at the so-called conservatives who desire this supposedly amicable split. His article, “A Strange Split in the UMC,” follows:

The United Methodist Church has decided to divide over the issue of same-sex marriage. This is not surprising, given the longstanding disagreements on this matter that have afflicted the denomination. The UMC has arranged the separation in a remarkably civil way: The proposed solution, formulated by a committee of members drawn from both sides of the debate, will (hopefully) avoid the rancor and distress and disputes about properties and pensions that have marked other such denominational splits in recent times.

It is odd, however, that this is the issue that has produced the division. Same-sex marriage has not become plausible or imperative by virtue of its own merits. It has only become plausible as a function of much wider and deeper shifts within society’s understanding of the self. The sexual revolution was always but a symptom of the selfhood revolution whereby expressive individualism came to dominate how our culture understands the purpose of life. And that means that any church where same-sex marriage is significant enough to cause divisive debate is a church where significant parties have already absorbed the spirit of the age regarding personhood, love, sex, and sexuality—whether intentionally or by cultural osmosis. And that in turn means it is a church where significant parties have already abandoned basic Christian anthropology and an orthodox understanding of biblical authority.

The United Methodist Church has been a theater for numerous battles over basic orthodoxy. At the Juicy Ecumenism2 blog, Mark Tooley has pointed out the church’s failure to deal with Bishop Joseph Sprague, who denied Christ’s eternal deity and bodily resurrection. One UMC church hosted a conference where the resurrection was denied.3 And a pungent response4 to Tooley from a UMC minister indicates that exactly what constitutes orthodoxy and belief in the UMC is disputed even among United Methodists. All this, in a sense, makes a split on an issue like same-sex marriage profoundly odd. Is the definition of marriage more important than the resurrection? In fact, does not the Christian definition of marriage itself depend upon Christology, of which the resurrection is a central component? Therein lies the risk: To fight over same- sex marriage while tolerating heresy on foundational doctrines is to make oneself vulnerable to the charge of being motivated less by fidelity to the Christian faith and more by homophobia. I am not saying that the UMC conservatives are motivated by homophobia, of course; but I am saying that, after so much else has been allowed to pass without division, making same-sex marriage the hill upon which to die does render such an accusation plausible.

This touches on two further difficulties Christians face on the issue of same-sex marriage. First, there is the broad cultural problem: This issue cannot be isolated from the much deeper cultural pathologies that have formed over many years. The helpful exchange5 between Rod Dreher and Robert P. George last week highlighted the various problems traditionalists face on this issue, particularly the cowardice that has characterized too many.

But courage is not enough. We live in a time and place where the foundational issues upon which same-sex marriage rests were decided long ago. For my generation, the aesthetic argument that kept my parents’ generation in check—homosexuality as disgusting— was barely plausible. For the rising generation, with taste buds shaped by everything from sitcoms to Internet pornography, this aesthetic argument is as ridiculous as that which (to use Freud’s famous example) makes a man find kissing a woman to be delightful but using her toothbrush to be disgusting. And the forces that have made morality a function of aesthetics, and rendered traditional Christianity distasteful, are too pervasive to allow for much hope that the situation can be changed for the better within the next few decades at least. A revolution so long in the making and so comprehensive in scope cannot be undone without an equally chronic counter-turn.

Second, and returning to the UMC split, the Christian church cannot expect its rising generation of young people to hold the line on traditional sexual ethics and marriage if that generation is not properly catechized in the basics of the faith. Same-sex marriage is not really the issue. Thorough catechesis is. At the risk of tautology, if Christian marriage makes sense, it only makes sense within the framework of Christianity, on the basis of an ethics rooted in Christian doctrine. There is no point in dividing a denomination or congregation over same-sex marriage if that division is not driven by a deeper commitment to creedal Christianity.

Trueman’s charge that conservatives in the UMC are guilty of “tolerating heresy on foundational doctrines” only to draw a line in the sand when it comes to issues such as homosexuality sadly applies to conservatives in many other denominations. Errors regarding God (that He loves everyone), Christ (that He offers to save all), God’s work of creation (that it can be harmonized with evolutionism), marriage (tolerating divorce for any reason), and about the sufficiency of Scripture (its claims have to be tested by science/general revelation) prevail. There may be much complaining and hand wringing, but little call for discipline, and though a few “radicals” may leave, most are content to stay and do nothing. Often for many decades(!) people are allowed to promote views on homosexuality or women in ecclesiastical office that are supposedly so odious to the conservatives. But these views are not odious enough to demand and seek to address these deviations in a biblical manner through Christian discipline. It is fine to be part of the federation and fellowship of those who promote these deviant views for decades. But let a decision be made that actually approves women in office or homosexuality, well then, it is time for a division! Now you go your way, and we will go our way, and civilly if you please.

This is not merely strange, but sinful. It is sinful to tolerate the evil of homosexuality and then seek an amicable split without doing the hard work of seeking the repentance of those who are guilty of transgressing the truth of God’s Word. It is sinful to tolerate and do nothing to reprimand those who hold twisted views about God, about Christ, about man, and about the Bi­ble that lead up to a sinful acceptance of homosexuality. Perhaps there does come a point where the evils have spread so much that the only thing to do is to separate, but not by making political deals that ignore the issues of biblical doctrine and morality in order to preserve some earthly property. What is needed is shame, repentance, a heart-felt remorse for sinful toleration of devia­tion from God’s Word. If a new “conservative” denomination forms without going to the foundations of the Christian faith and determining that it will not tolerate deviations from them, then it is doomed to fall again.

2  In Trueman’s online article the words ‘Juicy Ecumenism’ link to this website: https://juicyecumenism.com/2017/05/19/methodist-bishops-false-doctrine.

3  In the online article the words ‘the resurrection was denied’ link to the website at: https://juicyecumenism.com/2014/04/10/dc-methodists-host-resurrection-denying-seminar-on-historical-jesus.

4  The words ‘pungent response’ in the online article link to: https://thinkfaithfully.blogspot.com/2017/05/mark-tooley-bishop-sprague-ird-and.html. 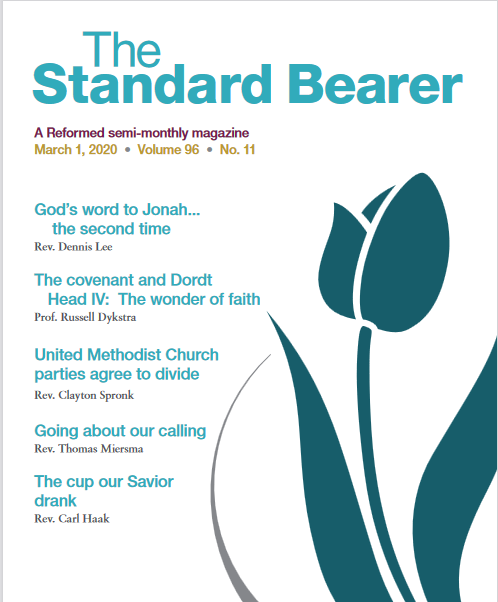