Ulrich Zwingli: His life and work

We know Ulrich Zwingli as one of the great leaders of the Protestant Reformation. When speaking of the men God raised up to reform His church, we mention the names of such men as Martin Luther, John Calvin, and Ulrich Zwingli all in the same breath. Yet, of these three servants of God, Zwingli is perhaps the least known to us. Zwingli was powerfully used by God to inaugurate the reformation of the church in Switzerland. Zwingli’s ministry laid foundations upon which the next generation of Reformers built. It is worth our while to become more familiar with this servant of God, who is also one of our spiritual fathers in the faith. That is the purpose of this article: to a give a short historical overview of the life and ministry of Ulrich Zwingli, the Reformer of Zurich, and the father of the Swiss Reformation.

Ulrich Zwingli was born on January 1, 1484, in the small shepherd village of Wildhaus, situated in a pristine valley among the snowcapped Alps. Zwingli’s father was the village magistrate and had the moderate means to send his gifted son to school. Young Ulrich, born in a humble shepherd village, was destined by God to be a shepherd of a very different sort. The sovereign hand of God was preparing Zwingli to be His undershepherd, whose life’s work would be leading God’s people out of spiritual darkness into the light of Christ and the green pastures of gospel grace.

At the young age of five Zwingli was sent to live with his uncle Bartholomew in Wesen. There he began his formal education. Over the next nine years Zwingli went to schools in Basel and in Berne, two large Swiss cantons that later became strongholds of the Reforma­tion. At the age of fourteen Zwingli entered the University of Vienna and then later the University of Basel.1 In Basel he sat under the instruction of Thomas Wittenbach, a reform-minded scholar who taught theology at the university. Some of the first seeds of Zwingli’s Reformed convictions were planted by Wittenbach’s teaching.2 In 1516, the budding young scholar graduat­ed with a Master of Arts from the University of Basel. Zwingli showed zeal for studying the classical literature of Greece and Rome. His whole life he cherished a love of learning. However, God’s chosen place for Zwingli—as with Calvin—was not the private study of the scholar, but the public pulpit of the preacher and pastor. God used Zwingli’s classical education to prepare him to be a preacher of the Word. Shortly after leaving the university, Zwingli received a call from the vacant par­ish in the city of Glarus. By God’s leading, the young scholar accepted and entered the sacred ministry.

Zwingli was ordained into the priesthood by the bishop of Constance in September of 1506. For ten years he labored at his first charge in Glarus, the capital of the rural canton of the same name. Zwingli’s large congregation was made up mostly of common people who knew little about God’s Word. Zwingli busied himself preaching and teaching his flock. At this time Zwingli was still more of a humanist scholar than biblical theologian. But even then, God used his preaching to bless the congregation in Glarus.

Being a scholar at heart, Zwingli continued to pursue his classical and biblical studies on his own. He taught himself Greek in order to study the New Testament in the original tongue.3 In good humanist fashion, he was a prolific writer of letters. He travelled to Basel to visit the renowned scholar Erasmus, whom he admired. As Zwingli developed as a Reformer, his relationship with Erasmus cooled considerably. Yet Zwingli never lost his admiration for Erasmus.

Zwingli’s career as Reformer had its small beginning in Glarus. His earliest writings strongly criticized the common practice of Swiss men enlisting as mercenaries in the service of foreign powers. Zwingli himself served as a military chaplain during his ministry in Glarus. He went to battle with a company of soldiers from his par­ish. He saw firsthand the deplorable effects of merce­nary service on the lives and morals of his countrymen. Zwingli also began to advocate for limited reforms of the church. He started questioning the unbiblical tra­ditions of the Roman Catholic Church: papal author­ity, intercession of saints, and indulgences. The seeds of reformation were growing in his heart, watered and nurtured by his reading and preaching of the Scriptures.

After ten years in Glarus, Zwingli moved to another charge in the city of Einsiedeln. There he labored for only two years. In October of 1518 the most prominent church in the city of Zurich, the Great Minster, became vacant. Oswald Miconius, Zwingli’s friend, who taught at the Great Minster’s school, recommended Zwingli for the position.4 In God’s providence Zwingli received the call. He accepted and became the next pastor at Great Minster.

Zwingli began his ministry in Zurich on January 1, 1519, on his 35th birthday.5 Zurich was one of the most prominent cities in the Swiss confederation. Zurich was populous and politically powerful, but also reputed for ungodliness. Heinrich Bullinger, Zwingli’s successor, called Zurich “the Corinth of Switzerland.”6 Through the preaching and ministry of Zwingli, the city of Zurich became the cradle of the Swiss Reformation.

Upon arriving in Zurich, Zwingli tirelessly devoted himself to the chief labor of his office: preaching the Word. Zwingli began preaching systematically through whole books of the Bible. He abandoned the church’s lectionary that assigned certain readings for each day. Zwingli began by preaching through the entire gospel of Matthew. He then proceeded to Acts, followed by several of the epistles of Paul. The people of Zurich embraced this new gospel preaching with enthusi­asm. They heard the Word of God as never before! In Zwingli’s preaching they heard about Christ and His atonement on the cross. They heard about God’s free grace in Christ. What joy the hearing of the pure gospel brought to the people of Zurich! Zwingli’s expository preaching was the root from which grew the Reforma­tion in Zurich.

Zwingli was also a compassionate pastor who cared for his flock even at great personal risk. In August of 1519, a terrible plague swept through Zurich, killing nearly one fourth of the city’s population. Rather than fleeing the plague, Zwingli remained in the city minis­tering to his flock. He brought the Word of the gospel at the bedside of countless sick and dying parishioners. Zwingli himself fell sick and came close to death. But the Lord preserved His servant.7

God used Zwingli’s preaching of the Word not only to bring light to His people in Zurich, but also to cause Zwingli to mature as a Reformer. Zwingli’s Reformed convictions did not come suddenly, but gradually. Al­though Zwingli lived at the same time as Luther, both men came to their Protestant convictions independent of each other. As Zwingli studied, preached, and pastored with the Scriptures, the Word of God mastered him. The gospel of Jesus Christ captivated him. The Reformation was born out of the Word of God.

The years of 1520–1525 were some of the most intense yet fruitful years of Zwingli’s ministry. During these six, busy years the Reformation took root and blossomed in Zurich. In 1522 Zwingli preached a sermon on Christian liberty defending certain citizens who had disobeyed Rome’s mandatory fast during Lent. That same year Zwingli and other clergymen petitioned the bishop of Constance to allow priests to marry. At this time Zwingli had already married a widow from his congregation named Anna Reinhart. Ulrich and Anna kept their marriage secret until 1524, when the Reformation in Zurich had progressed farther.8

Over the course of the next couple years, three import­ant public disputations were held in Zurich. Along with these disputations, the government of Zurich made deci­sions that advanced the cause of the Reformation. The first took place in Zurich’s town hall. Over six hundred people gathered to hear the debate between Zwingli and Dr. Faber, the Roman Catholic delegate. Zwingli pre­sented sixty-seven articles that summarized his views on Scripture, Christ, and the authority of the church. The city council judged Zwingli the victor and ordered the preaching of the Scriptures throughout the canton.9 The second disputation was held later that same year, with nine hundred in attendance. In this debate Zwingli re­futed the Roman Catholic use of images and condemned the mass on the basis of Scripture. The Zurich council again judged in his favor.10 The third disputation was smaller and centered on the mass. In 1524 the city mag­istrates took action and began removing images from the churches. The year 1525 was the watershed year for the Reformation in Zurich. On Easter Sunday the mass was finally abolished and replaced with the Lord’s Supper. For the first time in centuries, Zwingli administered the Lord’s Supper in the Great Minster of Zurich along with the preaching of the gospel. The sacrament was celebrat­ed at a table, not the altar. The elements were served using simple wooden utensils. With the abolishing of the mass, the separation from Rome was complete. Zurich was a Reformed canton.

The later years of Zwingli’s life were marked by increasing involvement in the politics and government of Zurich, as well as efforts to form alliances with other Protestants. In 1529 Zwingli and Luther met at the Marburg colloquy in an attempt to unify the Swiss and German branches of the Reformation. The disagreement that kept them apart was over the bodily presence of Christ in the Lord’s Supper. Luther refused to join hands with Zwingli.

During these years, strife flared up between the Swiss cantons that embraced the Reformation and those can­tons that remained entrenched in the old Catholicism. Zwingli, out of zeal to protect the gospel, argued in fa­vor of war. By the year 1531 war was on the horizon. The uneasy peace between the parties broke down. In October 1531 five Catholic cantons invaded Zurich. Poorly prepared to repel the invasion, Zurich was badly defeated at the battle of Kappel. Zwingli himself was killed in the battle. The defeat at Kappel and the loss of Zwingli was a heavy blow to the Reformed cause in Switzerland. But the Reformation was not defeated.

From a human perspective Zwingli’s death was un­timely. But this too was under the sovereign control of God. God raised up Zwingli at His appointed time and God took His servant home when his work was finished. Zwingli’s life and ministry were short. His ministry in Zurich lasted only twelve years. God ac­complished everything that He purposed to accomplish through Zwingli in those twelve short years. The foun­dations were laid. God would raise up other men to build upon them. 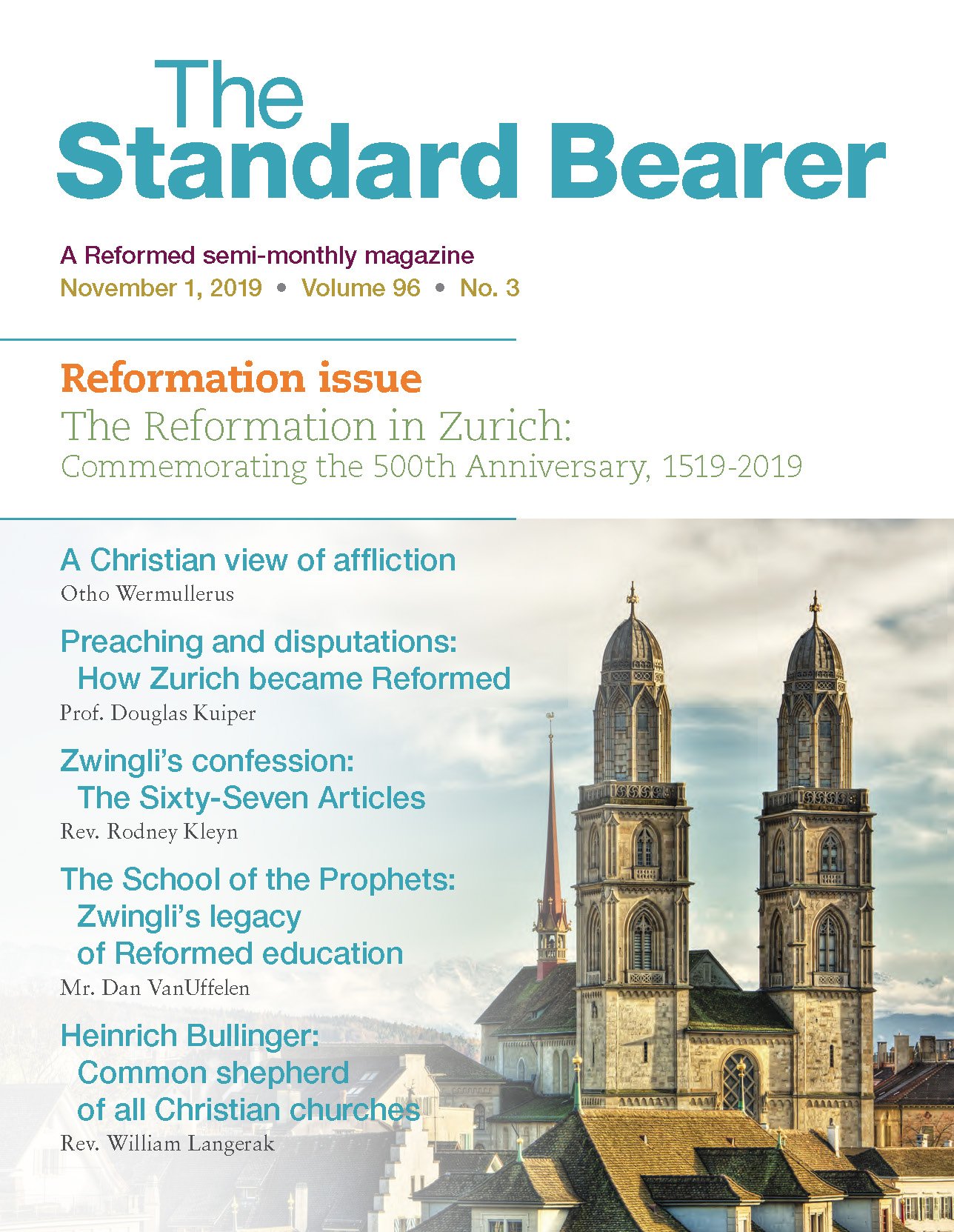