Mr. Lanting, a member of Cornerstone Protestant Reformed Church of Dyer, Indiana, is a practicing attorney.

“In sum, the Ohio voucher program is entirely neutral with respect to religion. It provides [tuition aid] directly to a wide spectrum of individuals…. It permits such individuals to exercise genuine choice among options public and private, secular and religious. The program is therefore a program of true private choice. In keeping with an unbroken line of decisions rejecting challenges to similar programs, we hold the program does not offend the Establishment Clause.”

“The [tuition voucher] money will thus pay for eligible students’ instruction not only in secular subjects but in religion as well, in schools that can fairly be characterized as founded to teach … all subjects with a religious dimension. Public tax money will pay at a systemic level for teaching the covenant with Israel and Mosaic law in Jewish schools, the primacy of the Apostle Peter and the papacy in Catholic schools, the truth of Reformed Christianity in Protestant Schools, and the revelation to the Prophet in Muslim schools…. *** Establishment Clause … doctrinal bankruptcy has been reached today.”

In what constitutional scholars are now describing as the Court’s most significant church/state decision in fifty years, a bitterly divided U.S. Supreme Court recently approved the constitutionality of state funded tuition vouchers paid to religious schools. Opponents of tuition vouchers had successfully argued for decades in state and federal courts that the receipt of state funds by private religious schools violated the Establishment Clause of the First Amendment (“Congress shall pass no law respecting an establishment of religion…”). After a decade of intentional silence on the contentious voucher programs operating in Wisconsin, Florida, and other states, the Court finally decided to adjudicate the constitutionality of Ohio’s Pilot Project Scholarship Program. In a 5-4 decision, the Court held that because the Ohio program was “neutral with respect to religion” and since the voucher funds were not paid directly to the schools but rather to the parents who then made a “private choice” for religious education, the Ohio program passed constitutional muster.

Ohio’s Pilot Project Scholarship Program provides tuition aid for certain students in the troubled Cleveland City School District to attend participating public or private schools of their parent’s choosing and tutorial aid for students who choose to remain enrolled in public schools. Both religious and non-religious schools in the district may participate, as well as public schools in adjacent school districts. Tuition aid is distributed to parents according to financial need, and where the aid is spent depends solely upon where parents choose to enroll their children. In the 1999-2000 school year, 82% of the participating private schools had a religious affiliation, none of the adjacent public schools participated, and 96% of the 3,700 students participating in the scholarship program were enrolled in religiously affiliated schools.

Tuition aid is distributed to parents according to financial need. Families with incomes below 200% of the poverty line are given priority and are eligible to receive 90% of private school tuition up to $2,250. For all other families, the program pays 75% of tuition costs, up to $2,875, with no co-payment cap. If parents choose a private school, checks are made payable to the parents who then endorse the checks over to the chosen school.

Ohio’s Scholarship Program also included the funding of “community” or charter schools, which are funded under state law but are run by independent boards enjoying the academic independence to hire their own teachers and determine their own curriculum. These community schools can have no religious affiliation and are required to accept students by lottery. Such community schools received state funding of $4,518 per student, twice the funding received by a participating private school.

Finally, the Ohio Scholarship Program also established “magnet” schools operated by a local school board that emphasize a particular subject area, teaching method, or service to students. Such schools receive state funds of $7,746 per student. Some 13,000 students were enrolled in the Cleveland magnet schools created by the Ohio Scholarship Program.

A majority of the Supreme Court held that the Ohio Scholarship Program did not offend the Establishment Clause because it was a program of “true private choice.” The parents residing in the beleaguered Cleveland school district had the option of sending their children to a public school, community schools, magnet schools, or a religious or nonreligious private school. Because the Ohio program was “neutral with respect to religion” and because the program entailed a private choice by parents, the Court ruled that the scholarship program does not result in an establishment of religion by the government, notwithstanding the fact that substantial state funds are indirectly received by private religious schools:

… where a government aid program is neutral with respect to religion, and provides assistance directly to a broad class of citizens who, in turn, direct government aid to religious schools wholly as a result of their own genuine and independent private choice, the program is not readily subject to challenge under the Establishment Clause….*** The incidental advancement of a religious mission, or the perceived endorsement of a religious message, is reasonably attributable to the individual recipient, not to the government, whose role ends with the disbursement of the benefits.

Other Government Aid to Religious Institutions

Justice Sandra Day O’Connor, filing a concurring opinion supporting the majority’s approval of the Ohio program, noted that Ohio’s Scholarship Program, resulting in some $8.2 million paid to private schools in Cleveland, “pales in comparison to the amount of funds that federal, state, and local government already provide to religious institutions.” She pointed out that churches enjoy real estate tax exemptions; clergy qualify for federal tax breaks on income used for housing expenses; Christian colleges receive student loans, Pell Grants, and G.I. Bill funds; religiously affiliated hospitals receive some $45 billion in Medicare and Medicaid benefits; individuals receive tax deductions for charitable contributions to churches. And she catalogued many other legislative schemes where state funds are received or benefits enjoyed by churches and other religious organizations. Justice O’Connor concluded that the state scholarship money flowing to private religious schools in the Ohio program “is neither substantial nor atypical of existing government programs” that benefit many religious organizations.

Justices Souter, Stevens, Ginsburg, and Breyer filed a vigorous dissent, arguing that the Ohio voucher program is unconstitutional since it is essentially “a scheme that systematically provides tax money to support schools’ religious missions.” This result, the minority opinion contended, is a violation of the First Amendment, which prohibits government establishment of religion. Citing a 1947 Supreme Court school aid opinion, the dissent insisted that:

No tax in any amount, large or small, can be levied to support any religious activities or institution, whatever they may be called, or whatever form they may adopt to teach or practice religion.

The dissent contended that the “majority’s twin standards of neutrality and free choice” are contrary to decades of case precedent, are all about “jettisoning substance entirely in favor of form,” and stand “in defiance of every objective supposed to be served by the bar against establishment.”

But in addition to its contention that the Ohio voucher scheme violated traditional Establishment Clause jurisprudence, the dissent also raised the ominous spectre of the inevitable corollary to governmental aid — governmental regulation:

…governmental largesse brings government regulation. The risk is already being realized. In Ohio, for example, a condition of receiving government money under the program is that participating schools may not “discriminate on the basis of … religion,” which means the school may not give admission preferences to children who are members of the patron faith; children of a parish are generally consigned to the same admission lotteries as non-believers. Indeed, a separate condition in the Ohio program that “the school … not … teach hatred of any person or group on the basis of religion,” could be understood to prohibit religions from teaching traditionally legitimate articles of faith as to the error, sinfulness, or ignorance of others if they want government money for their schools. *** When government aid goes up, so does reliance on it; the only thing likely to go down is independence. A day will come when religious schools [receiving state funds] will learn what political leverage can do, just as Ohio’s politicians are now getting a lesson in the leverage exercised by religion.

The Future for Choice

Constitutional scholars have opined that in terms of practical impact, “nothing else compares” with this decision on vouchers because school choice has the potential for affecting the education of tens of millions of American children. The Supreme Court’s ruling sends the educational choice debate back to the states, where its opponents have vowed to fight in the legislatures and state courts. Voucher opponents have also threatened to sponsor state legislation that will closely regulate and monitor all private schools participating in the various voucher programs.

Accordingly, although the Court’s voucher decision earlier this summer will give needed impetus to the charter and magnet school movement, it remains fairly certain that, like the Ohio program, private religious schools that participate in these government voucher programs will be threatened with forfeiture of their autonomy and independence in such areas as admission criteria, curriculum content, teacher certification, and other such fundamental issues. Thus, although the voucher decision clearly reflects an encouraging recent trend on the Court toward more equal treatment of religion, the decision has little promise for parental Christian schools which are understandably wary of losing their independence by submitting to loathsome governmental regulation which inevitably accompanies the receipt of government funds. 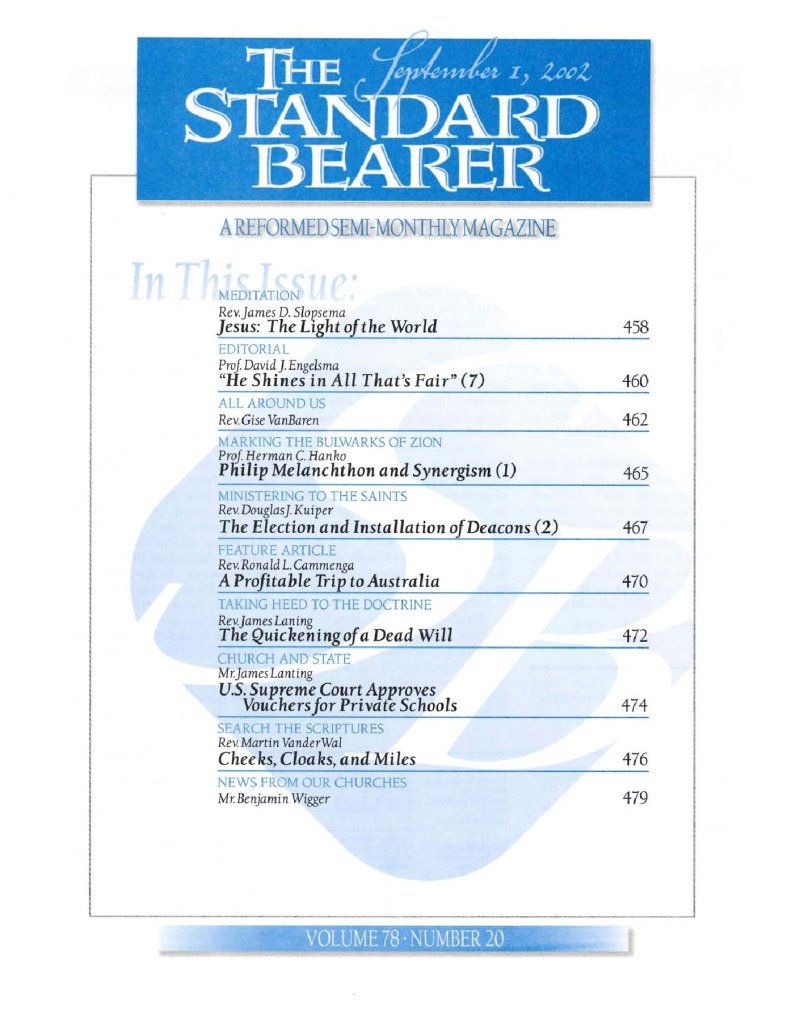