Regarding Mark Hoeksema’s review in SB 87:14 of the book by David VanDrunen, Natural Law and the Two Kingdoms: A Study in the Development of Reformed Social Thought,, which I have recently read myself, I would like to make some comments.

First, the brother writes that he views “the kingdom as a broader and more inclusive concept than that of the church, in keeping with VanDrunen’s historical analysis.” Though I am not sure what the brother means by this idea, VanDrunen is at pains throughout the entire book to demonstrate that, beginning with Augustine and all the way through to Abraham Kuyper, theologians have taught that the “redemptive kingdom” of Christ has always been limited to the church. For example, VanDrunen summarizes the teaching of these theologians thus: “God rules the church (the spiritual kingdom) as redeemer in Jesus Christ and rules the state and all other social institutions (the civil kingdom) as creator and sustainer.” VanDrunen quotes at length from these men in order to oppose the neo-Calvinist’s doctrine of a kingdom of Christ that is wider than the church. This is, in fact, one of VanDrunen’s primary motives in writing this book. Furthermore, do not our confessions identify the kingdom as Christ’s rule over the elect (i.e., the church) by His Word and Spirit (Heidelberg Catechism Q&A 123) as well as identifying entrance and exit from this kingdom as entrance and exit from the church (LD 31)? I do not understand, then, how the concept of kingdom can be “broader and more inclusive” than the church, unless the meaning is that the kingdom of Christ’s rule of grace in the hearts of the elect has visible effects in our workplace, schools, etc.

Second, having read the book, I was not at all convinced that the two-kingdom idea is the “traditional Reformed view.” VanDrunen’s “two kingdom” idea, although far better than the neo-Calvinist conception, is not historically Reformed. It is a very gentle (and hence more deceptive) form of common grace. This, VanDrunen demonstrates in the chapter on Abraham Kuyper, whose common grace theology VanDrunen shows to be in agreement with his own “two kingdom” theology in all important social/cultural/civil aspects. This is further shown in VanDrunen’s book Living in God’s Two Kingdoms, in which he grounds the “civil kingdom” in the covenant with Noah, just as Abraham Kuyper grounded his “common grace” there. Furthermore, VanDrunen does not, in my opinion, prove that Augustine, Luther, and Calvin taught his “two kingdom” theology; he only quotes them as teaching that the kingdom of this world is separate from the kingdom of heaven but that God in Christ nevertheless rules over both and that believers ought to live in both. (Also woefully lacking in VanDrunen’s theology is that the kingdom of this world represents the development of Antichrist and his kingdom, and that God sovereignly rules over it not for a purpose completely separate from the church, but for the sake of the church.) Finally, and perhaps most importantly, in the question of what is historically Reformed, the Three Forms of Unity and the Westminster Confession (the former of which VanDrunen does not deal with at all in his historical survey, and the latter of which he barely engages with) know only of a single kingdom of God: the “kingdom of Christ,” the “kingdom of heaven,” etc. In the words of the Westminster Confession: “The visible church, which is also catholic or universal under the gospel…is the kingdom of the Lord Jesus Christ” (25.2).

Third, I am not sure how the “natural law” can be the “moral standard for life in the civil kingdom,” since the Canons of Dordt say about “this light of nature…that [man] is incapable of using it aright even in things natural and civil” (III/IV:4). Ought not believers live all their lives, whether in the civil or ecclesiastical realm, not by “natural law” but by the regenerating power of the Holy Spirit and the law of God that is written in their hearts?

Thank you for expressing your opinions on various points in connection with my book review. It is always good to know that people are reading and thinking, and in your case, taking pen in hand. In large measure I agree with many of your comments.

You are considerably more critical of the book than I was, perhaps rightly. Nevertheless, I believe that the book accomplished the author’s intent. My point was that the book is worthwhile reading in the context of the current kingdom issue. The fact that I recommended it does not imply my total agreement, and does not constitute a blanket endorsement of the author’s views. Hopefully most readers are sufficiently perceptive to recognize errors when they see them (as you were), especially that of common grace, a pernicious heresy that wrecks everything it touches. My perspective was to mention the beneficial aspects of the book, not to analyze and condemn its every shortcoming. This latter always seems to occur soon enough.

Although the book review column is probably not the proper forum for a lengthy dialogue, perhaps the discussion can continue elsewhere. Thank you again for your contribution to the subject.

For a more in-depth analysis of this book, please see Prof. David Engelsma’s review in the Protestant Reformed Theological Journal(42:2, 169). 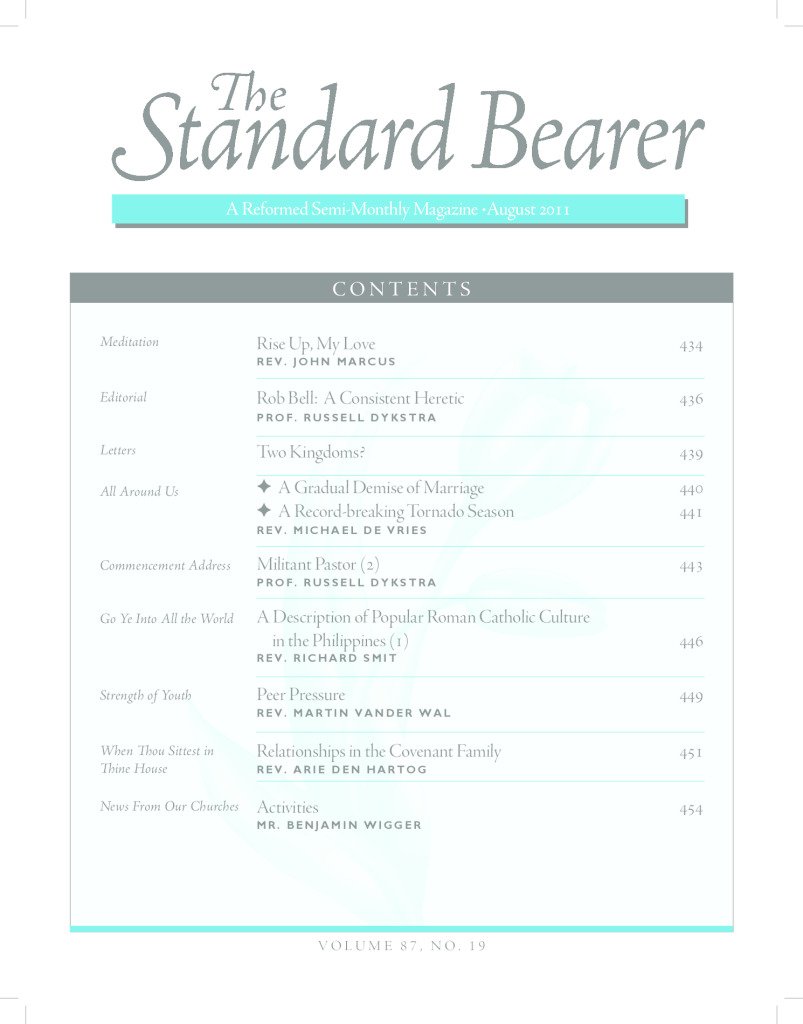