Perhaps none of our readers needs warning concerning many of the practices of cults which have been adopted, increasingly, by many in our land. Yet the deceptiveness and appeal of some of this might warrant a warning. These last days are characterized by the attraction toward that which is devilish.

One of the popular practices today is called Transcendental Meditation. So popular has it become, that Time magazine featured this in one of its latest issues (Oct. 13, 1975). The magazine speaks of its popularity and describes the practice as follows:

Before each game, New York Jets Quarterback Joe Namath finds a quiet spot and seems to nod off. In the middle of a gale on Long Island Sound, while her friends are wrestling with lines and sails, Wendy Sherman, a Manhattan adwoman, slips to the bow of a 36-ft yawl, makes herself as comfortable as she can, and closes her eyes. On warm afternoons in Rome, Ga., Municipal Court Judge Gary Hamilton and his wife Virginia can be found on their screened porch, apparently dozing. It is not a compulsion to sleep that these and perhaps 600,000 other Americans have in common. It is TM, or Transcendental Meditation, a ritual that they practice almost religiously twice a day and every day . . . .

. . .First off, a would-be meditator must attend two introductory lectures of an hour to an hour and a half. Then, if he is still interested, he pays his fee: $125 for an individual, with lower rates for college and high school students and children four (the minimum age) to ten.

The initiate takes off his shoes and gathers his “offering”: a fresh, white handkerchief, several pieces of sweet fruit and a bunch of flowers. TM claims to be totally secular, and the offerings are supposedly meant only as symbols: the flowers represent the flowers of life, the fruit the seed of life, and the handkerchief the cleansing of the spirit. After handing over his gifts, the newcomer is taken to a private room, where his teacher lights candles and incense and places the fruit, flowers and handkerchief on an altar under a color portrait of Guru Dev. The teacher then chants in Sanskrit and introduces the meditator to his mantra, the one word that is meant, to keep him meditating for the rest of his life.

The meditator is never supposed to reveal his mantra—not to wife, husband, lover or children. Each teacher is personally given a set of mantras by the Maharishi—exactly 17 according to one knowledgeable source. He must parcel them out to his initiates, based on a secret formula that presumably includes temperament and profession. Duly initiated, the fledgling meditator is ready for his meditating classes, which last about an hour and a half each and which must be taken on three consecutive days or nights. Together with others, up to 50 or more, he sits in a lecture room, meditates for ten minutes or so, opens his eyes with the others, then meditates again. With the help of charts and diagrams, TM theories are explained by instructors who, following the movement’s dress code, are invariably well-groomed and conservatively clothed.

Rather striking, too, is the support of this sort of thing by many organizations. Even the federal government, whose courts insist on the separation of church and state is involved. Time reports, “The Federal Government has so far funded 17 TM research projects, ranging from the effects of meditation on the body to its ability to help rehabilitate convicts and fight alcoholism.”

Reading of the promoter from India, the Maharishi, it becomes evident that there are definite religious overtones to this whole practice. Writes Time:

His aides are always awed and reverential around him. The headquarters of the movement, they say, is not in one physical spot but rather “wherever Maharishi is”—true believers do not use the article before his name. He is the only one in the movement who is not expected to and does not meditate on a regular basis. “He doesn’t have to,” says Robert Cranson, who served two years as one of his secretaries. “He long ago achieved a perpetual fourth state of consciousness. The clarity of his mind is awesome.”

The Maharishi believes that if only 1% of the population of any community or country is meditating, the other 99% will feel good effects and crime will be reduced. If 5% meditates, he adds, great things will really begin to happen. “A good time for the world is coming,” he says. “I see the dawn of the Age of Enlightenment. I am only giving expression to the phenomenon that is taking place.”

The above describes the formal practice of TM. However, I have observed other articles in popular magazines of our day which seek to advocate a variation of this TM. And, because of the claims of the whole of this practice, it becomes popular and appealing to Christians as well. Who would not want to lower his blood pressure by this means rather than through medication or hospitalization? Who would not be tempted to use this means to reduce his tensions and give peace of mind? Is it not an easy way to tranquility?

Some churches have regarded all the above to be such a serious threat that they have taken an official stand against it. The Association of Regular Baptist Churches decided this past summer:

Whereas there is a growing interest in that system known as “Transcendental Meditation,” and

Whereas United States Senate Resolution 64 introduced February 5, 1975, is a “Resolution To Increase Public Awareness of Transcendental Meditation,” claiming that this will strengthen our democracy and help achieve “the spiritual goals of mankind,” and

Whereas Transcendental Meditation is incorporated in the United States as an educational institution thus disguising its deeper purposes,

Be it resolved that, we, the messengers of the churches in fellowship with the General Association of Regular Baptist Churches, meeting in annual conference at Winona Lake, Indiana, June 23-27, 1975, alert our own constituency and Christians everywhere that Transcendental Meditation is one of a variety of yoga techniques introduced into our society from the East, and that as such has religious significance despite vigorous denials to the contrary by its advocates, and

Be it further resolved that we oppose its approval by state legislatures and by our national government as a breach of the principle of separation of church and state.

And what must we, as faithful children of God, say? Rather obviously, we must heed the warning of Scripture, (I Tim. 4:1, 7) ” . . .in the latter times some shall depart from the faith, giving heed to seducing spirits, and doctrines of devils . . . refuse profane and old wives’ fables, and exercise thyself rather unto godliness.” Or there is the warning of I Cor. 10:20-21, “. . .they sacrifice to devils, and not to God: and I would not that ye have fellowship with devils. Ye cannot drink the cup of the Lord, and the cup of devils: ye can not be partakers of the Lord’s table, and of the table of devils.”

And indeed it would be strange for a child of God to become involved either in “play” or seriously with this TM or variations thereof. Often one finds that the Christian has but little time for Scripture reading and prayer—but he can find 40 minutes a day for TM?

The trouble with such who turn to TM or some variation of it is that they have neglected proper meditation in the first place. Scripture emphatically speaks of meditation too—but of a spiritual sort. Psalm 1:1-2 states, “Blessed is the man that walketh not in the counsel of the ungodly, nor standeth in the way of sinners, nor sitteth in the seat of the scornful; but his delight is in the law of the Lord; and in his law doth he meditate day and night.” Or Ps. 143:5: “I remember the days of old: Imeditate on all thy works; I muse on the work of thy hands.” There are many similar passages. But note well: the meditation is not a repetition of a certain “mantra”, but rather upon God’s Word and His works. He who does such things doeth well.

And meditation for the child of God includes constant prayer. Eph. 6:18 states, “Praying always with all prayer and supplication in the Spirit, and watching thereunto with all perseverance and supplication for all saints.” And in I Thess. 5:17 we read, “Pray without ceasing”. And in James 5:13 the Word states, “Is any among you afflicted? Let him pray. . . .”

The point is, that when children of God turn to such things as TM, regarding it as a possible “cure” for some of their tensions, trials, etc., these show how far they have departed from the mandate of Scripture. These have not meditated properly according to the Word of God—or they would have no time to dabble in transcendental meditations. And these, in the way of proper meditations, would have indeed the peace which surpasseth understanding. They would have no need for any TM.

The child of God must continue in meditation of the Word and work of God, and in prayer. That is essential—and that is sufficient.

Will such meditation give one the things claimed by TM advocates? Yes—and no. No, this will not give those merely earthly, physical goals of a TM. But yes, this sort of meditation does give peace—and often does relieve the tensions and pressures which are sometimes so great on the earth. But such peace is infinitely above anything which T.M. or any other earthly variant could ever provide.

One more thing. If TM practitioners can spend 40 minutes a day, 20 minutes in the morning and 20 minutes at night in this sort of devilish meditation, could not the child of God do the same for proper spiritual meditation? I am convinced that many of our problems in church and family arise out of the fact that few have any time at all for proper meditation. What sort of spiritual lives would we enjoy, according to the promise of God’s Word itself, if we properly meditate upon His Word and come to Him in prayer? 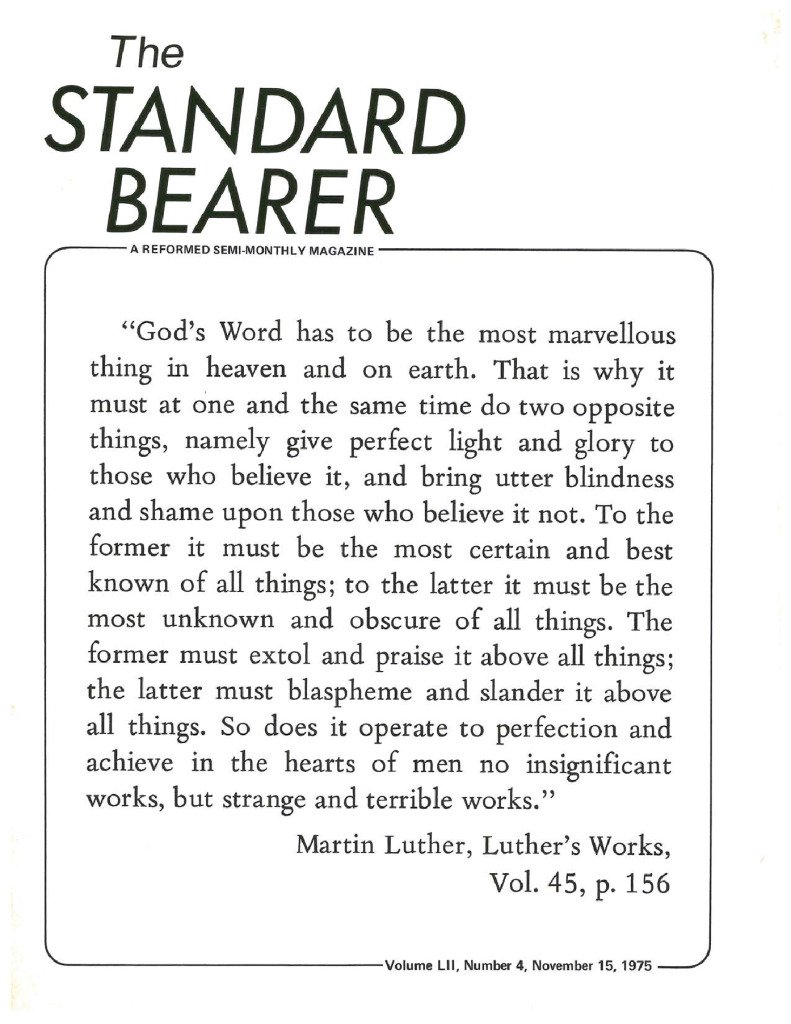