Topsy-Turvy Joy From “Down Under” (2)

Topsy-Turvy Joy From “Down Under” (2)

The June 20 issue of “The Banner” carried a few thoughts on “The Joy of Systematic Theology” which came from “down under,” that is, from Australia, from the pen of Dr. Klaas Runia of the Reformed Theological College in Geelong.

Now Systematic Theology, although I much prefer to call it Dogmatics, is dear to my heart; I find great joy in it. And the subject of Dr. Runia’s article, therefore, immediately caught my eye. Ah, I thought to myself, this will be an article which exalts the value of Systematic Theology and which even presents it as a delight to him who engages in the study of it. Besides, I thought, Systematic Theology (I prefer to speak of “Dogmatics”) has largely fallen upon evil times, fallen into disrepute; and it can therefore very well stand a “boost.” And when Dr. Runia wrote, “And yet we maintain that systematic theology is a joyful affair,” I breathed a hearty “Amen,” therefore. And even when he added, “But, of course, it all depends on how you are doing it,” I unsuspectingly went along with him; for, I thought, it is certainly possible for some systematic theologies to be “dry as dust” and for classes in this branch of theology to be “dull and lifeless and uninspiring.” I was naive enough to dream that Dr. Runia had in mind Systematic Theology which is thoroughly Reformed in its method and in its content when he spoke of it as being a joyful affair.

Imagine my disappointment, therefore, when this “down under” theologian, of whom I had expected better things, began to philosophize about a static-ontological way of theologizing and a dynamic relational way, to deprecate the former, and to extol the latter.

Imagine, further, my dismay when I discovered that Dr. Runia devoted about one-fourth of his four column article to what he thought was an illustration of the to-be-rejected “static-ontological” method from the “Reformed Dogmatics” of Herman Hoeksema. And imagine how my disappointment and dismay gave way to downright consternation when I discovered that to Runia the allegedly sound “dynamic relational” way of theologizing in. fact meant that one turns theology upside down (substituting a changeable for an unchangeable God), and that therefore the “joy” of which Runia was writing was after all a topsy-turvy joy, rooted in a topsy-turvy theology.

As To Dr. Runia’s Illustration

As I already mentioned, Dr. Runia attempts to illustrate what he means by the “static-ontological” way of theologizing by referring to a section of H. Hoeksema’s “Reformed Dogmatics.” In this connection Runia writes as follows:

Let us illustrate what we mean by an example. Let us take the attribute of God which is usually called God’s immutability. In the fast way of thinking the emphasis is on the ontological aspect. Immutability means that God cannot change and this is applied to his Being, that is, to God as He is in himself. Recently we read the Reformed Dogmatics of Prof. H. Hoeksema. One could call this work a typical example of the static-ontological way of thinking. The immutability is circumscribed as follows. “God is that He is in all the infinite and constant fulness of His Being. He does not grow older, does not increase or decrease in Being or power, is from eternity to eternity the same in all His virtues, in His mind and will, His love and life, the absolute fulness and Self-sufficient God.” It is not surprising that Hoeksema does not really know what to do with such biblical expressions as “God repents.” Actually in his explanation, the expression is entirely robbed of its meaning: “We must remember that the eternal and immutable God reveals Himself in time, and that what is thus revealed to us in a succession of moments is eternally and unchangeably in the mind of God.” Whatever these words may mean (it is rather hard to understand them), it is clear that they virtually change the expression into its opposite!

Now I will pass by the question why Dr. Runia, especially when writing for readers of “The Banner,” did not choose his illustration from the dogmatician of the Christian Reformed Church, Prof. Louis Berkhof, who speaks similar language about God’s immutability.

But there are certain items which should not be ignored in this connection.

One of them is the fact that Dr. Runia finds this language dark and difficult to understand, so that he is in doubt about its meaning. I profess that I fail to see what is difficult about this explanation. It is written in plain English: “We must remember that the eternal and immutable God reveals Himself in time, and that what is thus revealed to us in a succession of moments is eternally and unchangeably in the mind of God.” What is so obscure about this statement? Apply it to one of the instances of God’s repentance cited in this connection, that of Genesis 6:6. It means that the “moment” of God’s making man in the earth, the moment of the fall, the moment of the rapid development of the first world in sin, the moment of the filling of the measure of iniquity by that fast world, and the moment of God’s wrath with respect to the wicked pre-diluvian world,—all these moments were eternally and unchangeably in God’s mind, and that too, in relation to one another.

But what is not clear to me, in the second place, is that fact that while Runia finds this statement “rather hard to understand” and is not clear as to its meaning, nevertheless suddenly the statement is so clear to him that he can write: “. . .it is clear that they virtually change the expression into its opposite!” Now the latter is exactly not clear; nor can Runia by any stretch of the imagination demonstrate this. It is plain to anyone that the opposite of the statement, “It repented the Lord that he had made man in the earth,” is: “It repented not the Lord that he had made man in the earth.” And this “opposite” Dr. Runia cannot find in Hoeksema’s explanation, nor in any of his writings.

What, then, is the point which Hoeksema makes in this connection? It is this, that whatever the explanation of God’s repentance may be, that explanation may not be such that it contradicts the truth of God’s immutability, but must be such that it is in harmony with the Scriptural truth of the divine unchangeableness. I know not what Dr. Runia thinks of this. But to me this is both sound exegetical practice and sound dogmatics: Scripture does not contradict Scripture! It is not Hoeksema’s intention to explain God’s repentance in this connection, but only to show along what lines that explanation must be made, namely, that “these instances may never be explained as presupposing a change in God.” And if Runia had quoted the entire paragraph from which he takes a couple sentences, this would have been clear to the readers of “The Banner.”

But this also renders the vaunted and allegedly joyful systematic theology of Dr. Runia suspect. For if he accuses Hoeksema of virtually changing the expression (“God repents”) into its opposite, when Hoeksema only insists that God’s repentance must be explained in harmony with His immutability, the suspicion immediately arises that Runia indeed wants to explain God’s repentance as presupposing a change in God.

And this is literally what Runia wants, as is plain from the following quotation:

In the dynamic-relational way of thinking, the approach is quite different. The term immutability is not primarily seen as a qualification of God’s Being-in-the-abstract, but rather it is interpreted as God’s remaining faithful to himself and therefore to his word to us, both his word of promise and his word of judgment. It is obvious that the ontological aspect is not denied. On the contrary, it is seen as basic, but at the same time it is stated in relational terms: God being faithful to himself, to his innermost Being. And this is immediately related to his faithfulness to us.

This is also the way the Bible itself speaks about God’s unchangeableness. Hoeksema quotes three passages of Scripture,

but in all three cases he completely ignores the context. These passages are not statements about God’s Being-in-Himself, but they all speak of God’s faithfulness to his people. This faithfulness is not based on anything that is in these people, but on God himself for He is a God who is far from all arbitrariness and capriciousness. He is a God upon whom his people can rely in all circumstances. Within this context, expressions like “God repents” do not create a real problem either. They are indicative of the fact that our faithful God is a living God. Although He is in no way imprisoned in history (He is the Creator, who in an act of Sovereign freedom created the universe and thus started its history), yet He is right in history with us, and He acts and reacts in history. He never changes his word, but He does change His attitude toward people in full accord with the word He has spoken to them. If they sin, his wrath is kindled. If they repent, his forgiving grace comes to them.

There is no change in God, in the sense that one does not know what He will do the next moment. On the contrary, one knows this all the time, for He has spoken and his word is firmer than the strongest rock.

Now I will not criticize this confused passage in detail. I will pass by the many unsupported, irrelevant, and contradictory statements.

Let me point out, however, the one glaring fact. Dr. Runia contradicts the truth of God’s unchangeableness and bluntly teaches that God changes! This is not merely my interpretation of Runia; it’s his own literal statement. There it stands: “HE DOES CHANGE HIS ATTITUDE TOWARD PEOPLE. . . .” Runia may try to qualify this and limit it and speak of a sense in which God does not change. The fact remains that in his vaunted “dynamic-relational” theology he embraces a proposition which no Reformed man should ever be able to get out of his pen: God changes!

Now this is dreadfully serious! Let no one think this is a matter of academic debate or theological hairsplitting. I submit that the statement of Runia is a direct contradiction of Malachi 3:6, a passage of which he states that Hoeksema ignores the context. Let us grant, for the sake of argument, that Hoeksema ignores the context. But then Runia ignores and contradicts the text. The text says: “I Jehovah change not.” Runia says: “He does change. . .” And here is the seriousness of the matter from a practical, spiritual point of view: by contradicting the text Dr. Runia contradicts the very basis for the comfort expressed in the last part of the same verse: “therefore ye sons of Jacob are not consumed.”

This is indeed topsy-turvy theology, the perversion of true theology.

And whatever joy may be derived from it is a topsy-turvy joy!

This kind of theology does not make me glad, but sad.

Moreover, if this is a fair sample of the way they do theology down under, then I can only feel sorry for the Reformed Churches of Australia. And as far as this country is concerned, “The Banner” does its readers no service by giving this kind of theology a forum in its pages. I strongly advise Editor Vander Ploeg to make correction,—in the interest of the Reformed faith. 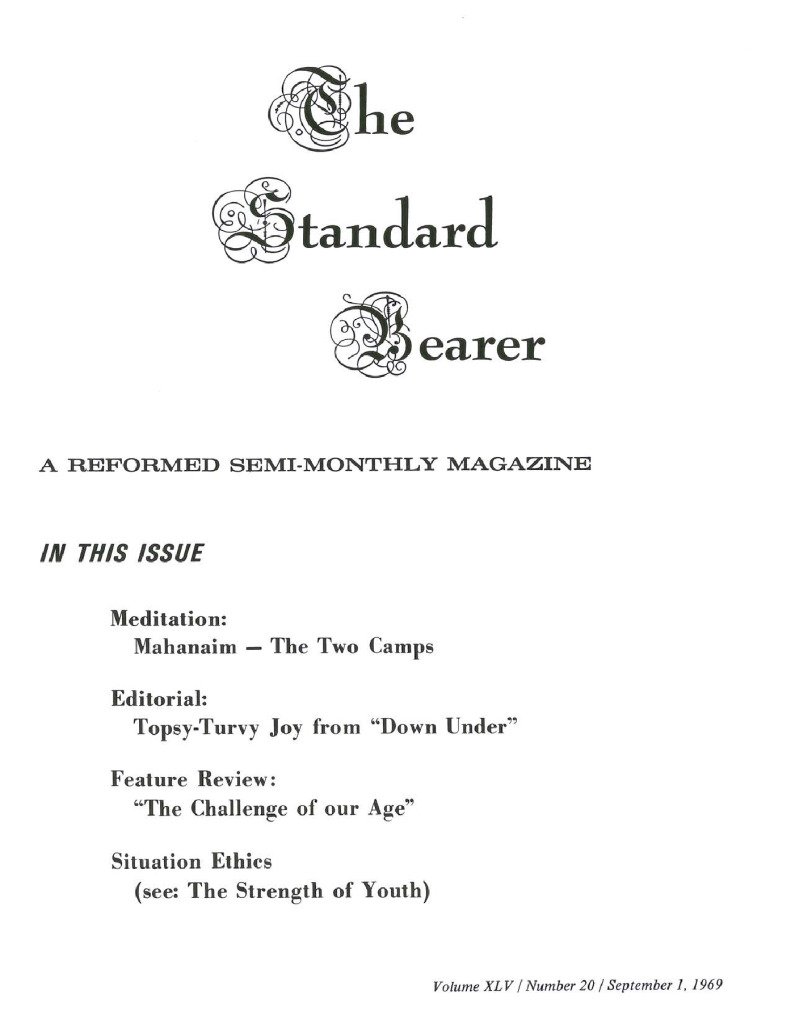