Today if Ye Hear His Voice, Harden Not Your Hearts (Psalm 95:7b-8a)

Today if Ye Hear His Voice, Harden Not Your Hearts (Psalm 95:7b-8a)

Let us labor to enter the rest that remaineth to the people of God. Because of their unbelief the children of Israel perished in the wilderness. With the tragic end of these Israelites before their eye, the faithful are to fear, lest a promise being left them of entering into His (Christ’s) rest, any of them shall seem to come short of it. That a rest remaineth to the people of God is the inevitable conclusion to which the reasoning of the sacred writer leads. The word of the Lord, “Today if ye will hear His voice, harden not your hearts,” came to Israel by the prophet David ages after God had entered His rest (the rest of creation) and also many years after Israel had entered the typical rest of Canaan, so that the rest which the exhortation of the prophet David concerned was the rest that remains, to wit, the eternal rest which Christ entered with His people. Such is the reasoning of the sacred writer.

The Israel of the desert period had not entered into the typical rest of Canaan on account of unbelief. This Israel had tempted the Lord, saying, “Is the Lord in this place?” The Lord had promised to be in every place where Israel would come. Said the Lord to Moses, “I have surely seen the affliction of my people which are in Egypt, and have heard their cry by reason of their taskmasters; for I know their sorrows; and I am come down to deliver them out of the hand of the Egyptians, and to bring them up out of that land into a good land, unto a land flowing with milk and honey” (Ex. 3:7-8). The Lord had provided His people with an abundance of evidence that He would do as He had said. In the words of the psalmist, “He sent Moses His servant; and Aaron whom He had chosen. They showed His signs among them, and wonders in the land of Ham. . . . He brought them forth also with silver and gold; and there was not one feeble person among their tribes. Egypt was glad when they departed; for the fear of them fell upon them” Ps. 105.

Yet the children of Israel on the journey through the desert to Canaan would say, in every emergency, when there was want, and the need was not immediately supplied, or when danger threatened and their plight seemed hopeless,—“Wherefore is this that thou, Moses, hast brought us up out of Egypt, to kill us and our children and our cattle?” And they would ask, “Is the Lord in this place?” meaning, “The Lord is not in this place, O Moses; thou hast brought into a region where the Lord would not have us be. Therefore this evil hath overtaken us.” So they reasoned, though they knew better in their hearts—knew that in bringing them into the wilderness, Moses had followed the instructions of the Lord. So did they break forth in bitter complaint instead of letting their requests be made known in everything by prayer and supplication with thanksgiving unto God. They knew that to a humble cry on their part the Lord would deliver them from all their troubles. Yet they repeatedly asked whether they had been brought up out of Egypt to be killed. When the spies reported that the promised land of their abode was inhabited by giants, they even expressed the wish that they had died in Egypt.

So did they, the carnal seed, tempt the Lord, that is, question, repeatedly, the Lord’s willingness to do right by His people. And this questioning of theirs was the expression of unbelief—of an unbelief that as to its essence was hatred of God. The carnal seed hated God. Canaan as a land where they were to be established for a people unto the Lord that He might be their God, had no attraction for them. Only as a land flowing with milk and honey, as a place of figs, of vines, and of pomegranates, was Canaan to them a prize to be desired. This is evident from their murmurings. “And why,” said they to Moses, “have ye brought up the congregation of the Lord into this wilderness, that we and our cattle should die?. . . . It (the desert) is no place of seed, or of figs, or of vines, or of pomegranates. . . .” What vexed them is the hardships of the journey. The figs and the pomegranates of Canaan, was no compensation for the sufferings of the life in the wilderness, and for a conflict with the tribes by which the land of promise was infested and by which it was being corrupted. In Egypt they had sat at fleshpots, had eaten to the full of garlic and onions and leek. Canaan was a good land, but it was not worth the price they were being required to pay. Egypt with its bondage was much to be preferred to the discipline to which they as the army of God were being subjected. How they tempted God. They accused the Lord of having brought them “unto this land, to fall by the sword that our wives and children should be a prey.”

And He was vexed by their accusations. Forty years long was He grieved with them, and said, “It is a people that do err in their heart, and they have not known my ways: unto whom I sware in my wrath that they should not enter into my rest” (Ps. 95). So He shut them up in the desert, and their carcasses fell in the wilderness.

In one of his parting discourses, Moses said to the people of Israel, “Who (namely, Jehovah) led thee through that great and terrible wilderness, wherein were fiery serpents, and scorpions, and drought, where there was no water; . . . (Deut. 8:7). God is still leading His people through a terrible wilderness to glory. This wilderness is the world in which Satan goes about as a roaring lion, and the godless like wolves and scorpions lie in wait for the faithful. It is a place, this wilderness, where God’s people must wrestle against powers, against the rulers of darkness of this world, against spiritual wickedness in high places. But why be dismayed? The Lord is in this place indeed! Even today we hear His voice, “Labor to enter the rest.” To enter the rest is to labor. There is the body of this death that must be put off; the self that must be denied; the chastening of the Lord that must be endured; Satan that must be resisted; the world that must be overcome; the name of Christ that must be confessed; and the truth that must be witnessed for.

Labor to enter into the rest. Say not that our labor is in vain in that we are no match for the united forces of evil. Know that sin is condemned in the flesh, that the victory has been won by Christ, that believers have been set together with Christ in heavenly places, and that their life is hidden with Christ in God, and that, when He shall appear, they also shall appear with Him in glory.

If you hear His voice today, harden not your hearts. He who hardens his heart, reasons and behaves as did the children of Israel whose carcasses fell in the desert. Such a one is disposed as were they. He is one who loves not God and who is thus spiritually disqualified for the hardships of the wilderness. He will not be disciplined, will not deny himself and take up his cross. With the giants in the earth he makes peace and thus loses his soul. When the world threatens the little flock which he under the impulse of a false fervor joined, when the clouds of persecution gather, he is troubled and says, “Wherefore has the Lord brought us into this land, to fall by the sword. . . .”

Today if ye hear His voice, harden not your heart. 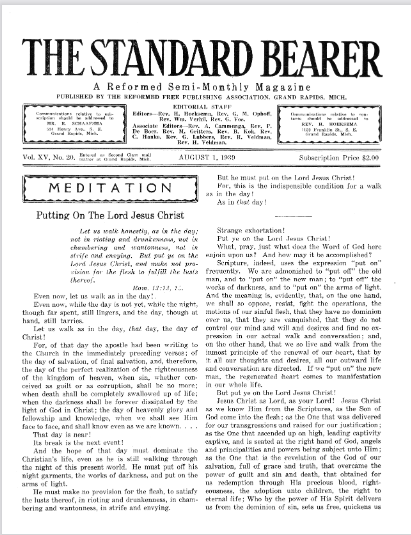