“To Teach Them War” (9) Knowing War’s Origin: In Man’s Fall STRENGTH OF YOUTH

“To Teach Them War” (9) Knowing War’s Origin: In Man’s Fall STRENGTH OF YOUTH

The Doctrine of Original Sin

In this series on spiritual warfare we proceed methodically, and deliberately so. Before we come to specific details like swords, shields, breastplates, fiery darts, enemies, battlegrounds, and crowns of victory, we need an understanding of some basic doctrines. Fundamental to the idea of holy war is the biblical doctrine of sin. Without the right view of sin, our conception of spiritual warfare either makes no sense, or is erroneous. Especially vital is the truth of Adam’s fall with its consequences for humanity.

We have considered Adam’s fall into sin as a declaration of war against God. Last time we examined the Pelagian doctrine of imitation, as we tried to understand the connection between Adam’s fall and his corrupt posterity. Pelagius taught that there really is no connection between Adam’s fall and the depravity of mankind. He said Adam’s fall did not bring sin and death into the world for all mankind, but the world is full of sin because good people imitate the bad examples of their predecessors. In his fall, Adam merely became a bad example to his children. With Augustine, we found this Pelagian doctrine erroneous and detrimental to the gospel of Jesus Christ. Contrary to the teaching of Pelagius, the fall of Adam did have consequences, deadly serious consequences, for all of humanity, including every man, woman, and child on earth today. There is an inseparable connection between Adam’s fall and every man. This brings us to the doctrine of original sin.

The doctrine of original sin includes two main aspects: original pollution (or corruption) and original guilt. Original pollution refers to the transmission of Adam’s polluted—fallen and depraved—nature to all of his descendants. Adam is the organic head or first father of the human race. He is the root out of which the tree of the human race grows. If you ever tried to draw your family tree, you probably never made it back a half-dozen generations because the tree becomes huge. If you did and kept going, you would find that you are a descendent of Adam and a relative, by blood, of every human being. We all belong to Adam’s family tree.

As Eve is the mother of all living (Gen. 3:20), so Adam is the father of all mankind. When God divided all the nations of the earth after the great Flood and gave them their land, “He separated the sons of Adam” (Deut. 32:8). That is true because every man in every nation was a son of Adam. All men share one blood (Acts 17:26), exactly because all men proceed from Adam.

The father of us all fell into sin and became polluted or depraved in nature. When Adam, the fountainhead of humanity, fell and became a fountainhead of iniquity, every man who stands in the stream of the human race stands in polluted waters arising from the old fountainhead Adam. Every man is by nature a child of wrath, brought forth dead in trespasses and sins (Eph. 2:1-3; first question of our Baptism Form), because every man is brought forth with the depraved nature of his father Adam.

Anticipating the coming of a sinless Messiah-Savior, every believer in the old dispensation lived with one pressing question, “Who can bring a clean thing out of an unclean?” And the answer was “Not one,” (Job 14:4). That was a problem. Which Israelite couple could bring forth a sinless Messiah? Jesus Himself declared, “That which is born of the flesh is flesh,” (John 3:6). All humans are infected with the spiritual, moral disease of hatred for God and love for sin. Morally pure children who love God and love righteousness cannot come of Adam’s race any more than grapes can come of thorns or figs of thistles. Humans only beget sinners. As fish never produce fowl and chimpanzees never produce humans, so humans never produce saints. The Holy Spirit produces saints. Flesh does not. Adam the root is polluted, and so is the whole tree.

Augustine rightly rejected and refuted the Pelagian doctrine. Sin is not the result of good people imitating bad examples. Instead, every human being should say with David, as Augustine learned to say, “Behold, I was shapen in iniquity and in sin did my mother conceive me” (Ps. 51:7). David was not imitating bad examples while in his mother’s womb. As a descendent of Adam, he was a sinner with a sinful nature from his mother’s womb.

We believe that, through the disobedience of Adam, original sin is extended to all mankind, which is a corruption of the whole nature and an hereditary disease, wherewith infants themselves are infected even in their mother’s womb….

And the Canons of Dordt III/IV:2 teaches,

Man after the fall begat children in his own likeness. A corrupt stock produced a corrupt offspring. Hence all the posterity of Adam, Christ only excepted, have derived corruption from their original parent, not by imitation, as the Pelagians of old asserted, but by the propagation of a vicious nature.”

As important as the doctrine of original pollution is, it raises questions. How is this hereditary disease passed from generation to generation? Is pollution transmitted biologically through, shall we say, the egg and sperm of human reproduction, so that a little baby is conceived in the womb with a polluted body, and then the spiritual soul is contaminated upon contact with that polluted physical body? Some have reasoned along these lines. But is sin really a material substance that can be genetically transmitted from parent to child?

In his battle against Pelagius, Augustine emphasized original pollution, as did the Reformers over against the Papists of Rome, and as do our Reformed creeds. But the questions we raised indicate that the doctrine of original pollution, though necessary, is not sufficient to explain man’s depravity. In His providence, God would guide the church into a deeper understanding of the doctrine of original sin, especially after the Reformation, as Reformed theologians saw more clearly the importance of Adam not only as an organic head but as a federal (covenant) head.

Original sin also includes original guilt, which refers to the imputation of Adam’s sin to all his descendants, making them guilty and the objects of God’s just punishment.

Adam was not only the organic head of humanity, but God in His sovereign, good pleasure appointed Adam the federal or representative head in whom all human beings were legally constituted (Rom. 5:12-21; I Cor. 15:22). Thus, God holds all men responsible for what Adam did. Such representative headship is common among men. For example, when Sihon king of the Ammonites declared war against Israel, all of the Ammonites were responsible for that declaration because Sihon was their representative head. No Ammonite could claim, “I am not at war, I did not consent to this!” All the Ammonites were at war with Israel by virtue of their head’s declaration. So also when Adam sinned and declared war against God in alliance with Satan, we sinned and declared war against God in alliance with Satan.

God, the righteous Judge, imputed the sin of Adam to all who were in Adam. That is, God legally transferred the sin of Adam into the account of all those who were in Adam. The head’s sin is our sin. Because Adam’s sin was imputed to all men, all men are guilty before God. Because all men are guilty, all men must be punished. How?

When Adam sinned and became guilty, God punished Adam with death (Gen. 2:17). That death was not merely the separation of Adam’s body and soul at age 930, but was immediate spiritual separation from God unto sin, so that Adam became dead in sin. God punished guilty Adam with the just punishment of a spiritually polluted nature. So also every human being, because he is guilty in Adam, is justly punished by God with death—separation from God and unto sin in a spiritually dead nature. It is perfectly just for God to punish all men with the spiritual death of a corrupt nature, because all men are guilty on account of having the sin of their representative head justly imputed to them.

To put it differently, man is not a sinner because he sins; man sins because he is a sinner, and he is a sinner because he has been punished for his sin in Adam. To put it yet another way, man’s legal status (guilt) is not based upon his condition (pollution); but man’s condition (pollution) is based upon his legal status (guilt). Biology does not explain our wicked natures; God’s just imputation does. The explanation for the depraved nature of every man is that the sin of Adam was imputed to each man. The explanation for the sinless nature of Christ, born of the Virgin, is that no sin was imputed to His Divine Person as the Son of God.

The inspired apostle Paul teaches this doctrine of imputation in Romans 5:12-21, in order to demonstrate that the doctrine of justification by faith alone, in which the righteousness of Christ the representative Head is imputed to all those in Him, is not a new doctrine. We are not righteous before God because of our holy natures or our holy actions, but because of imputed righteousness. Again, our legal status (innocence) is not based upon our condition (holiness unto good works); but our condition (holiness unto good works) is based upon our legal status (innocence). Who would object to that legal imputation of righteousness as the only way a man can be righteous before God? For God has always dealt with man through a legal head as Romans 5:12-21 demonstrates (as by one man came the offence and death, so by one man [Christ!] came the righteousness and life).

When the opening chapters of Genesis are no longer regarded as literal history, we lose Adam; losing Adam, we lose original sin; and losing original sin, we lose the imputed righteousness of the second, the last and better Head, Jesus Christ. We lose the gospel. This battle is worth fighting for.

Only the doctrine of original sin can explain the wickedness that prevails among mankind, and this doctrine is necessary for understanding our spiritual warfare. It is God’s doctrine, not Augustine’s, and we must believe it.

1 An example of a current denial of the doctrine of original sin can be found in The Story of God Bible Commentary: Genesis, by Tremper Longman III (Grand Rapids, MI: Zondervan, 2016). Longman, an influential biblical scholar and seminary professor, argues, “Genesis 3 answers many questions, but the primary question it answers is what is sin and why we sin as well as the question why we die. The answer is that we sin and die, not because of Adam’s sin, but because of our own sin. The Bible never teaches that we sin and die because of Adam” (71). Also he adds, “In short, the idea that we inherit a sin nature, guilt, and death from Adam (and Eve) does not derive from the Old Testament or from Paul, but from the thinking of Augustine” (72). 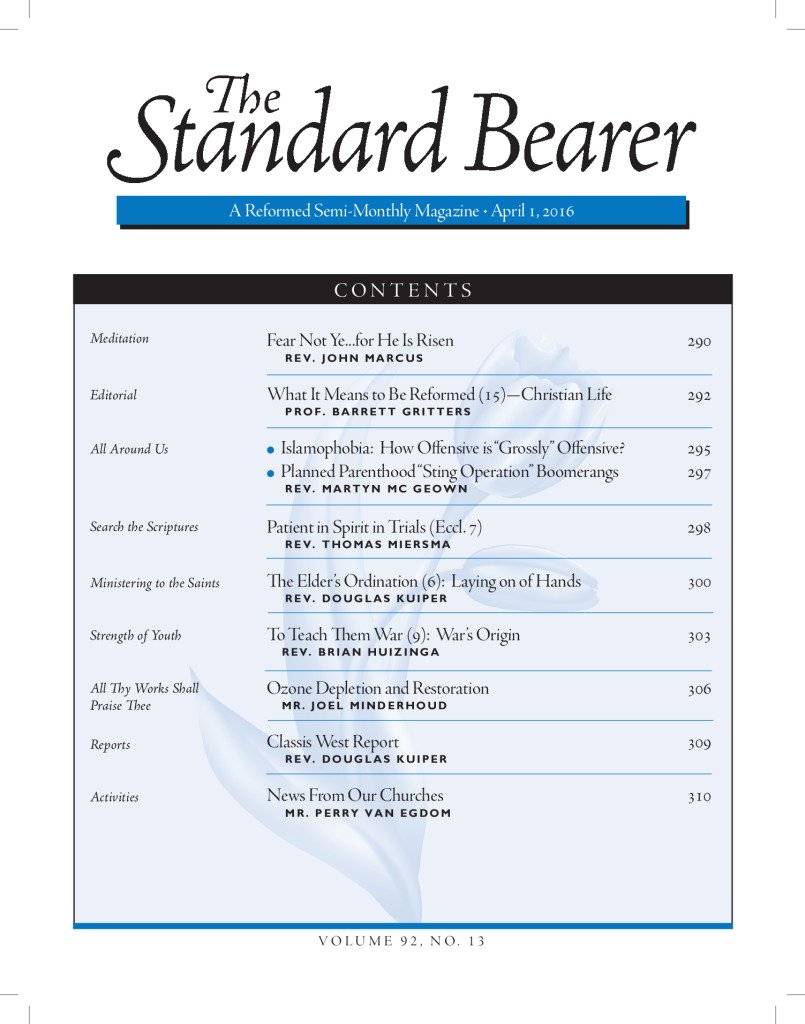