“And he did eat.” With that very brief and unadorned statement, the Bible recounts a literal, historical, creationchanging event. A man named Adam ate. Adam’s eating is what we, in catechism class, call “the Fall.” We say “fall” because Adam sinned, and by sinning he fell away from God—his loving Maker and Friend—and into darkness and death. We say “the Fall,” but not because this was the first fall in time. As we explained last time, Satan fell before Adam. Also, Adam’s wife Eve broke God’s commandment and fell before her husband. Strictly speaking, Eve’s rebellion against God was the first sin committed by a human being. But we say “the Fall” because Adam was the head of humanity and king of creation. In his fall the human race fell, and all creatures were subjected to the bondage of corruption.

The historical event of “the Fall” is recorded in Genesis 3. We must join the faithful church of all ages and read the opening chapters of Genesis as literal history. Today, a lively battle rages in seminaries, pulpits, classrooms, libraries, homes, and on the Internet over the historicity of Genesis 3 and its surrounding chapters. The literal Adam of the inspired, infallible, trustworthy, authoritative, perspicuous Bible is dying as more and more of his sons try to kill him by denying his historical existence as expressed in Genesis. With greater and greater ecclesiastical acceptance of evolutionary theory as the explanation of origins, the opening chapters of Genesis are increasingly rejected as the stuff of fairy tales. A six-day creation?! A literal human being named Adam as the father of us all?! A special garden with two special trees?! A talking serpent?! A “Fall?!” Death for all?!

Adam and Eve were made in God’s own image. They lived together in love for their Maker and in love for each other. They had dominion over all the creatures in the garden in which God placed them. God granted them freedom to eat of all the trees of the garden, except one. Of the tree of the knowledge of good and evil they were forbidden to eat. Should they eat of that tree, they would die according to God’s own, clear warning. I trust you know the history well. By the instigation of the devil, who spoke through the serpent, they chose to eat. They fell. Adam’s fall was “the Fall.”

The Fall as War

The first declaration of war and act of aggression in human history occurred with that fall of Adam in the garden of Eden about six thousand years ago. No formal written declaration of war was drafted and stamped. No swords clashed. No guns blazed. No bulwarks crumbled. No ground shook. No blood spilled. No cries sounded. A commandment was broken. A good commandment of God was wickedly transgressed when Adam ate a piece of fruit he was commanded not to eat. Adam transgressed the covenant. Adam dealt treacherously against God. This eating was war, and war of staggering proportions, for it was man’s war against Almighty God. The conducting of warfare in human history does not begin with any physical aggression between men, but with Adam’s spiritual assault against God in rebelling against God’s commandment.

The Genesis account of “the Fall” does not describe it as warfare; nevertheless, the language of the first three chapters of Genesis implies that Adam’s sin was war. First of all, that God threatened Adam with the punishment of death should Adam eat of the tree of the knowledge of good and evil (Gen. 2:17) implies that eating from that tree was an act of warfare against God. For God kills His enemies. God called Joshua and Israel to kill His enemies. The Psalms speak often of God destroying His enemies. That God threatened to kill the law-breaker in Eden implies that the law-breaker was a warring enemy in opposition to God. Secondly, God’s promise of enmity in Genesis 3:15 (“And I will put enmity…”) implies Adam’s sin against God was war. In order for God to save Adam, Eve, and their spiritual seed, God had to put “enmity” or war between them and the other party that consisted of the devil and his seed. God had to put war between those two parties, because through the Fall, our parents had joined an unholy alliance with the devil. The devil was at war with God. When Adam chose to obey Satan rather than God, he joined the war against God.

Wicked war! The wickedness of this warfare was not that Adam waged war against God unjustly, say, perhaps, in failing to follow some officially adopted protocol for declaring war on another party. There are no circumstances in which war against God may be justified. The wickedness was the very fact that Adam declared war against God. Adam said “Yes, I shall” to God’s “Thou shalt not.” Doing so, he made the infinitely good and ever-blessed God of covenant fellowship his enemy. He made his Maker in whom he lived, and moved, and had his being the object of his hatred. He was against the One who was only ever for him. Moreover, by eating that fruit Adam declared, “Honorable Satan, my wife and I would count it a privilege to be numbered with your principalities and powers and join your militaristic cause of overthrowing God, so that we can sit on the throne of the universe, determining for ourselves right and wrong.” Eating a piece of fruit was not a minor slip-up. Some challenge the idea that Adam’s eating was sin, and sin so serious it required death. They say Cain’s murder of Abel was sin, or the great violence before the flood. But eating a piece of fruit?! That is sin?! Indeed, as is every sin, Adam’s eating was wicked rebellion against God.

Deadly war! God killed Adam. God always kills His enemies. His holiness and justice demands it. The moment Adam ate, he died. How? Certainly, Adam began to weaken and perish in the flesh, so that at the age of nine hundred and thirty years he would return to the dust whence he came. But his death was worse than that of four-footed beasts. Not only was Adam to know he was bound for the eternal death of hell, unless a Mediator would come (One did—gracious gospel and merciful God!), and not only was Adam banished from the garden and God’s presence, but also, at the moment he turned against God in warfare by breaking God’s commandment, Adam died spiritually in his entire nature. Sinning, he became guilty. Guilty, he must be punished. Punishment must be death, as threatened. Adam died spiritually when God’s judgment came upon him in the corruption of his entire nature. Adam was dead in trespasses and sins. His heart became deceitful above all things and desperately wicked, teeming with hatred for God and the neighbor. He died.

Misery-inducing war! If one word could describe Adam’s original life in Eden, it was pleasure (Eden means pleasure.). Pleasure is living consciously in peace with God, knowing the gentle favor of His countenance as your will conforms to His. Our Heidelberg Catechism teaches that if there is one word to describe Adam after his fall it is misery. Misery is living in the consciousness of God’s wrath as your will is opposed to His. Miserable is that man who wars against the Almighty. War is so awful. For example, while in hiding in Amsterdam during the German invasion of World War II, the teenager Anne Frank wrote in her now-famous diary, “I could spend hours telling you about the suffering the war has brought, but I’d only make myself more miserable. All we can do is wait, as calmly as possible, for it to end. Jews and Christians alike are waiting, the whole world is waiting, and many are waiting for death.” But what is the wrath of the dreadful Hitler compared to the wrath of the holy God? Knowing the Almighty God surrounds you, the guilty sinner, and is against you in His terrible judgments, is misery that truly no man or woman can tell. What misery Adam brought to himself and the garden by his eating!

God-ordained war! As we have already pointed out in previous articles, God sovereignly ordained this Fall (war). The chief reason was the occasion to magnify His own name through the revelation of His unspeakable mercy in Jesus Christ. To the dead sinner banished from the garden, God brought the hope of Jesus Christ His incarnate Son who would be sent into the world. Through His awful crucifixion under the terrible judgments of God, Jesus would atone for Adam’s sin of wicked, foolish war against God. Jesus would reconcile enemy Adam to God, so that God would not kill Adam eternally. The Spirit would resurrect Adam in the depths of his existence, giving him a new heart of love for God, and a will that loves to say, “I shall,” to God’s “Thou shalt.” Through Jesus, God would lift Adam out of all of his misery and death and ultimately to a higher life in heaven, where Adam could enjoy a pleasurable paradise exceeding all the glory of Eden.

It is important that we know and believe the truth of the Fall. Only if we understand Adam’s eating to be the significant and dreadful event of war that it was, can we understand the redemptive work of Jesus Christ to be the significant and marvelous work of reconciliation that it is. If Adam’s eating was a minor slip-up, then the cross is a minor fix-up. If Adam’s fall was war of staggering proportions, then the cross is reconciliation of unfathomable mercy, heavenly wisdom, and the source of immeasurable benefits. For where sin abounded, grace did much more abound.

But what about you and me? Why does knowing what a man did some six thousand years ago in a garden matter for us today? So what if Adam made war with God? So what if Jesus saved Adam?

We have deliberately withheld making specific application of the doctrine of the Fall as war to our own personal lives, so that the focus could be on Adam and his heart. Next time the focus will be on us and our heart as we turn to what we in catechism call “original sin.” Adam is so important for us because we were in him. His war is our war. Everything we said of Adam must be applied to us. Everything. Thankfully, his deliverance also! 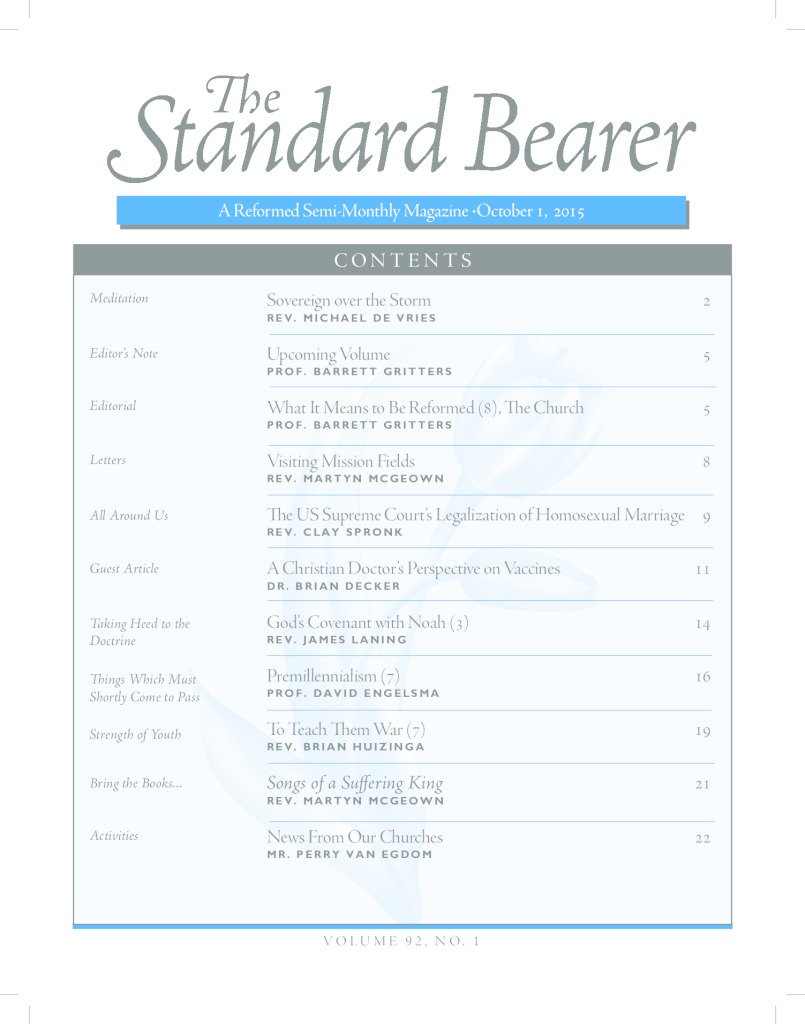