To Keep the Record Straight (1)

To Keep the Record Straight (1)

We recently received a copy of an article (which has by this time probably appeared in print) written by Dr. J. DeJong, editor of the Clarion magazine of the Canadian Reformed Churches, the Canadian wing of the Liberated Churches. I was happy to receive it; for, if we are to gain a full understanding of this important chapter of our history, it is important that we understand also how those on the Liberated side of these issues perceive the matters with which we have been concerned. His article read as follows:

Just for the record

Readers of Clarion will recall that on more than one occasion various writers, including myself, have interacted with church leaders in the Protestant Reformed Churches. Repeated attempts to promote a meaningful discussion have not had promising results. Except for the occasional letter to the editor, there is little room for Canadian Reformed writers to defend their position in the Standard Bearer, the official publication of the Protestant Reformed Churches.

I would not willingly return to these points were it not for another series of remarkable allegations published recently in Christian Renewal by Rev. B. Woudenberg.1 Somehow the issue of the PRC’s relationship to those whom they call “the Liberated” just does not want to go away. In fact, Rev. Woudenberg had a lengthy series of articles dealing with the ‘Liberated’ in the Standard Bearer in which many issues previously discussed in the pages of Clarion were again brought forward.2 His remarks in Christian Renewal only summarize what he had said earlier in these articles.

Some aspects of Rev. Wouden-berg’s comments in Christian Renewal merit a response. I prefer to focus this time not primarily on doctrinal questions but questions of church history. If there is to be any progress in ecumenical discussions, we must at least have a proper view of what actually happened. My remarks should be seen in the light of seeking to promote understanding and unity in the relationship with the Protestant Reformed Churches. In many ways we share a common history and common concerns! We can appreciate their warnings against the theory of common grace, and against the dangers of Arminianism! But to understand each other’s position, we need to cover a good deal of ground, also in the exact sequence of events surrounding the early immigration.

In his response to Rev. J. Tuininga of Lethbridge, Rev. Woudenberg reviews the early history of the immigration in Canada, and the effects this had on the Protestant Reformed Churches. He says that the Protestant Reformed Churches first welcomed the new immigrants with open arms. While Rev. H. Hoeksema had said that he did not agree with Schilder’s concept of the covenant, he was willing to give Schilder and the Liberated a fair hearing. New immigrants coming from the Liberated churches in Holland were assured that they were welcome in the PRC. As Woudenberg says, “… although we had no hesitancy about receiving their members, we were careful to inform them that, while they were free to believe about the covenant what they would, they could expect a different view to be preached from our pulpits.”3

So far there is little disagreement about the course of events. There is no doubt that the early ‘Liberated’ immigrants had a view of the covenant which differed from the one promoted by the Revs. Hoeksema and Ophoff. But the PRC had other ministers with different views, and there was sufficient room for various views on the covenant. The only requirement was that all be bound to God’s Word as confessed in the Three Forms of Unity.

The letter of Prof. Holwerda

All this changed, according to Rev. Woudenberg, when a letter was written by Prof. B. Holwerda to one of the new immigrants concerning the course of action they ought to follow. As Woudenberg puts it: “But then it was discovered that Prof. Holwerda was privately advising those same immigrants (‘Liberated’, JD) to join the Protestant Reformed, but to ignore Hoeksema’s covenant view and work their own into our churches — and even more, that certain of our ministers had privately expressed their approval of this. That, and not Schilder’s ignorance of our differences was what brought about the breakdown of relationships between us and the Liberated, as well as causing a major disruption in our own denomination.”4

I will bypass the remarks made about Prof. K. Schilder. Earlier in his article Woudenberg says that Schilder was not inclined to give definite answers on the differences between himself and Hoeksema. I would only ask where this information comes from; articles in De Reformatie appear to tell a different story. Yet my real concern is the letter of Holwerda. For in Woudenberg’s view, this letter was the occasion for the rift between “Liberated” immigrants and the Protestant Reformed Churches. Is this true?

A look at the letter

Perhaps it should be noted first of all that Prof. Holwerda’s letter was published without his consent, and in complete disregard of its stated intent. In this letter, written to brother J. Koster of Chatham, Prof. Holwerda only states that, in accordance with what he had learned from the PRC ministers Kok and DeJong, there was no binding to the opinions of the Revs. Hoeksema and Ophoff.5 In the letter Holwerda expresses his disagreements with the hesitancy of the Synod of Amersfoort 1948 to enter into correspondence with the Protestant Reformed Churches, and he also states, “The Protestant Reformed Church is the true church”. He then expresses the hope that Liberated immigrants, having joined the PRC, might assist in a “deepening of insight.” He quotes Rev. Kok who had said, “We can learn from each other.” And Holwerda expresses the wish that the doctrinal riches of the Netherlands might be passed on to the Protestant Reformed Churches.

It is clear from the letter itself that there is no substance to the rather coloured allegations of Rev. Woudenberg. For he reads Prof. Holwerda’s letter as a distinct plan of attack against the Protestant Reformed Churches, a pre-arranged strategy of infiltration.6 But that is entirely misconstrued, for Holwerda promoted mutual upbuilding and mutual correction. He wanted to give equal room to both views, and so let matters resolve themselves through process of learning, study, debate and interaction. If necessary, this would lead to a new ecclesiastical consensus through discussion at the various ecclesiastical assemblies — although it should be noted that Holwerda himself does not mention this possibility. Holwerda simply followed the norms of Scripture regarding the gathering of the church as applied to the concrete situation facing the immigrants.

Was this letter the occasion for the rift? That appears to me as an inaccurate rendition of the facts. For this advice of Holwerda was followed by the early immigrants both in the Hamilton and in the Chatham area. Chatham was first instituted as a Protestant Reformed Church, and Hamilton also opened its pulpit to ministers from the Protestant Reformed Church. Much appreciation was expressed for PRC workers such as Rev. Cammenga and Rev. Petter. Thus, while the immigrants did not want to adopt the PRC view of the covenant they remained open to fellowship with these churches, and willingly accepted PRC ministers.

How did the rift come? It came through the adoption of the infamous Declaration of Principles by the PRC Synod of 1951. Before that time, that is, for two years (!) after the letter of Prof. Holwerda, there was ongoing fellowship with the PRC. Only when the Synod adopted the Declaration as a binding statement for the institution of new churches, only then did the breach come. At this point Chatham could no longer remain in the fellowship of PRC churches. The rift came not from a personal letter, but from the very public Declaration of Principles.7

If the thesis of Rev. Woudenberg was correct, there would not have been a two-year interval before the schism with the Protestant Reformed Churches actually took place. If the personal and private letter of Prof. Holwerda had the kind of effects as suggested by Rev. Van Woudenberg the rift would have taken place immediately, or at least shortly after the letter itself was written. Not only do we have the clear mark of the two-year interval, we also have the official declaration of the consistory of Chatham confirming the exact reasons for their secession.

I write these lines not to needlessly provoke conflicts or to open old wounds. My only point is: should we not first be sure of the facts? We can always debate the issues, but the sequence of events should not be hopelessly skewed and misrepresented in favour of vindicating our theological perspectives on the covenant. How can we ever make progress in Reformed ecumenicity if we do not accurately recount the past?

Even a neutral reader can see that the Hoeksema-Ophoff maneuvers in 1949 and 1950 were an overblown and highly charged reactionary attempt to shore up Hoeksema’s view of the covenant. Had the brothers been more cautious and less stringent in their approach, they would not have lost so many people to the CRC and the Canadian Reformed Churches.

Prof. K. Schilder repeatedly said to Rev. Hoeksema: we have no special view of the covenant. Indeed, there were many different views on the covenant going right back to the early days of the Secession. It is true that the Liberation produced a crystallization of Reformed understanding regarding the covenant. But no one view was ever adopted as confessionally binding. In fact “Liberated” means that binding to one particular view on the covenant was explicitly rejected.

Since we have so much in common, we can only strive to keep channels of discussion open, and hope and pray that through continued study, prayer and dialogue, we may witness the growing unity of those who according to the norms of the word belong together in the Lord.

This then constitutes the article of Dr. DeJong. As you may note, he focuses most of his attention on the letter of Prof. Holwerda, which from a historical point of view is certainly appropriate. In fact, how one understands this difficult but important juncture in our history will be reflected in how one interprets the various nuances found in that letter. In order to try to make our viewpoint clear, we will deal with that letter in terms of the history that led up to it in our next articles.

2.I refer to the series of articles “Taking Heed to Doctrine” as published intermittently in the Standard Bearer from May, 1992

6.This is clear from what he wrote in 1992: “…Prof. Holwerda, rather than contacting our churches openly and discussing our differences, was secretly instructing the immigrants to infiltrate our churches and take them over for their view.” The Standard Bearer, Vol. 68, No. 15 (May 1, 1992), 356. Nothing of this can be found in Holwerda’s letter.

7. The decision of the consistory of Chatham is found in De Reformatie Vol. 27, No. 9 (December l, 1951), 79. The decision and further elucidation is signed by the brothers J. Koster, president, and J. Van Dieren, clerk. For more on the content of the Declaration of Principles and the decision of the consistory of Chatham, see W.W.J. VanOene, Inheritance Preserved. The Canadian Reformed Churches in Historical Perspective (Premier, Winnipeg, 1975), 64-67. 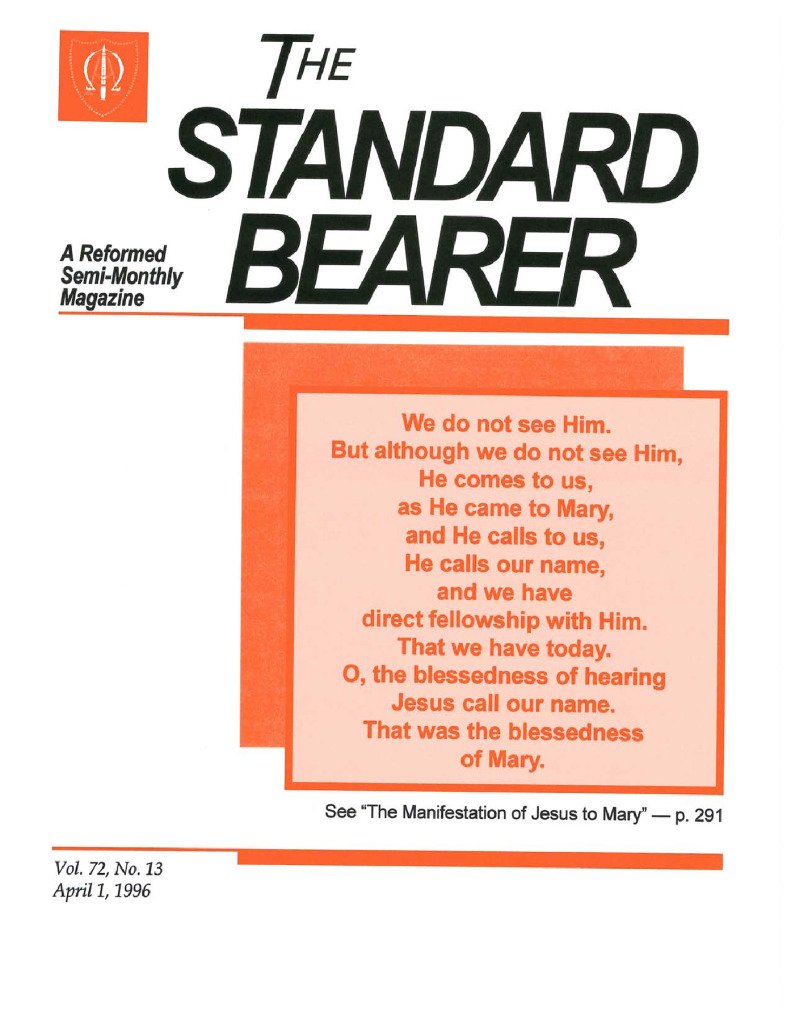