Three missionaries in the Philippines

Three missionaries in the Philippines

Our churches have undertaken something we have never done before in our mission work, namely, we have called and sent three missionaries to work together on one mission field. It was already a significant undertaking to begin calling (in 2008) and then to send (in 2009) two missionaries to the Philippines. Now we have three.

From our perspective as missionaries, as well as from the perspective of the churches and saints here in the Philippines, this is reason for much gratitude to God. He, the Lord of the harvest, has answered our prayers and has provided the three men for this work. We give Him humble thanks.

But one might wonder if it is really necessary to do this. Why three missionaries on the same field, and why three on a field where the established churches have their own pastors? Would not two be enough, or even more than enough? Could not the Protestant Reformed Churches in the Philippines themselves take care of mission work in their own country? If we really are serious about doing mission work in “all the world” in obedience to the Great Commission (and I personally believe our churches are serious about this and striving to do it well), might it not be a better use of our resources if, instead of having three missionaries in one country, we spread out more throughout the world and work toward calling and sending a missionary to one of our other possible fields of labor?

I trust we are agreed that we need at least two missionaries on our foreign fields. This is now an established practice in our churches for foreign missions. That began with Synod 2008’s decision that “our churches adopt the normative practice in foreign missions of sending two missionaries to labor together.” The grounds for this decision are also helpful in reminding us why we do this. Those grounds are as follows:

c. There is benefit to maintaining continuity on our foreign mission fields.

d. There is benefit for missionaries to work with a colleague for mutual counsel, encouragement, assistance, accountability, and objectivity.

e. Due to the distance involved, as well as to the complexity of foreign labors, having two men on the field will provide weight to the decisions made on the field.

What this decision shows is that two men ought to be called and sent regardless of the amount of work there might be in a specific field. Synod was convinced that we should always send two. The matter of the amount of work was not even alluded to, let alone mentioned, either in the decision itself or in its grounds.

Yet, as anyone who has kept abreast of our work in the Philippines knows (from our newsletters, presentations, and blogs), the Lord has given us plenty of work for two men. More, in fact, than two missionaries along with the existing churches and their pastors can do justice to. Many are the requests for preaching and teaching in existing churches or groups of believers. Many are the opportunities to take up new work in various places throughout the Philippine archipelago. Great is the interest in the Reformed faith in this predominantly Roman Catholic country. The Lord of the harvest has given us a bountiful harvest.

All of this is a significant factor in why we need three men on this mission field. A third missionary could share in the abundance of work that God has provided. This was summarized well in Rev. Holstege’s recent Philippines newsletter.

So why do we need three men? Well, because there is a lot of…work here…. Rev. Kleyn has been occupied with a wide variety of activities, including preaching at Bulacan, Maranatha, and occasionally at Provident; teaching church order at Maranatha and catechism at Provident; making monthly trips to Negros (another one of the Philippine islands) where he gives classes to a large number of pastors who are eager to become Reformed in all respects; advising committees of the PRCP; and more. Rev. Holstege has been occupied especially at Provident, preaching twice on most Sundays; teaching the church order and leading a youth Bible study; teaching the Canons of Dordt midweek and engaging in evangelism work; chairing Steering Committee meetings; attending Tagalog classes every Tuesday and doing the homework; and more.

There is, however, another and a more weighty reason why three missionaries are needed (as also pointed out in the above-mentioned newsletter). And that is for the sake of establishing a seminary and providing theological training for aspiring pastors.

The need for this is urgent. The laborers on behalf of the gospel of God’s sovereign grace in Jesus Christ are few. The Protestant Reformed Churches in the Philippines consist of three churches, each of whom has a pastor. But one of these pastors is already in his early 70s. Soon one of the existing churches will need a pastor. That is also the case for another congregation that hopes soon to join the PRCP and does not have a pastor. In addition to this, the PRCP is doing its own denomination mission work. They currently have a mission field in Leyte, and then also the possibility of more mission fields. The question they ask is, Where will we obtain the manpower so that we can send missionaries to these fields? The individual congregations also have ongoing outreach work that calls out for attention, yet the churches are significantly limited in manpower for this. We missionaries also continue to receive many requests for preaching and teaching. The Lord has given the PRCP and us as missionaries a field characterized by a great and a growing interest in the truths of the Reformed faith. More pastors and missionaries are urgently needed.

Specifically needed for all this work are Filipino pastors and missionaries. Men are needed who know the language and understand the culture of the Filipino people. While we as missionaries are learning the Tagalog language, we are far from fluent in it. It will take us many years, perhaps even a lifetime, to understand all the finer points and idioms of the language so as to be able to communicate well in it. And besides this, there are many other dialects throughout the Philippines (70 or more). As soon as we take up a work in a different part of the country, we confront a different dialect. And while English works well, it is not the first language of most Filipinos.

Additionally, we believe that Filipino pastors need to be trained in the Philippines itself. This is certainly preferable to taking the men away from their churches, their families, and a country in which they feel at home. Try to imagine yourself being required to live alone for four years or more in a country and culture that is radically different from what you are used to, and to study and train there for such a high and important calling as the ministry. Consider too that English is a second language for most Filipinos. The reality is that the great majority of their conversations take place in Tagalog (or another dialect). How would any of us fare if we were suddenly in a country for four years or more, for the purpose of studying, and yet English was not the spoken language?

With all this as the background, our churches have been calling (since 2016) for another missionary. And now the Lord has provided. The presence of a third missionary will serve well the goal of establishing a seminary. We and the churches here eagerly anticipate this.

The plan is to have one of the missionaries devote the majority of his time, in conjunction with the theological training committee of the PRCP, to the work of setting up a theological school. There is plenty to be done in that regard, such as curriculum, entrance requirements, investigating what others have done, government registration, finding a suitable building, deciding who will teach what, preparing the courses, etc. Once these things have been worked through and subsequently approved by our mission committee and synod, then will begin the work of providing instruction. Perhaps all three missionaries will be involved in this. Perhaps we can also obtain the assistance, from time to time, of our retired seminary professors. We certainly hope so.

Setting up a seminary is a significant part of foreign mission work. We should not think that foreign missions simply involves establishing churches. Theological training is also a big part of it, especially once a denomination is in place. Even in our own churches, one of the first priorities at our inception as a denomination in 1924 was a seminary. That is what the Protestant Reformed Churches in the Philippines also need. And they themselves realize it. Both the PRCP (the members, the Theological Training Committee, and the Classis) along with the PRCA (the missionaries, calling church, Foreign Mission Committee, and Synod), consider it a priority to establish a seminary in the Philippines where indigenous pastors can be trained and then called by the churches to preach the gospel to their own people.

The fact that our denomination understands the need for and is behind this endeavor is evident from two of the three grounds of Synod 2016’s decision to call a third missionary to the Philippines. Those two grounds read as follows:

The idea that foreign missions usually (if not always) includes the work of setting up a seminary is worthy of more attention. Perhaps we can return to and look at this in more detail in a future article. For now, suffice it to say that all of us here in the Philippines are extremely thankful to God for supplying another missionary. The churches are excited at the prospect of a seminary. We pray God will bless this endeavor for the further strengthening of His church and for the spread of His truth throughout this part of the world. 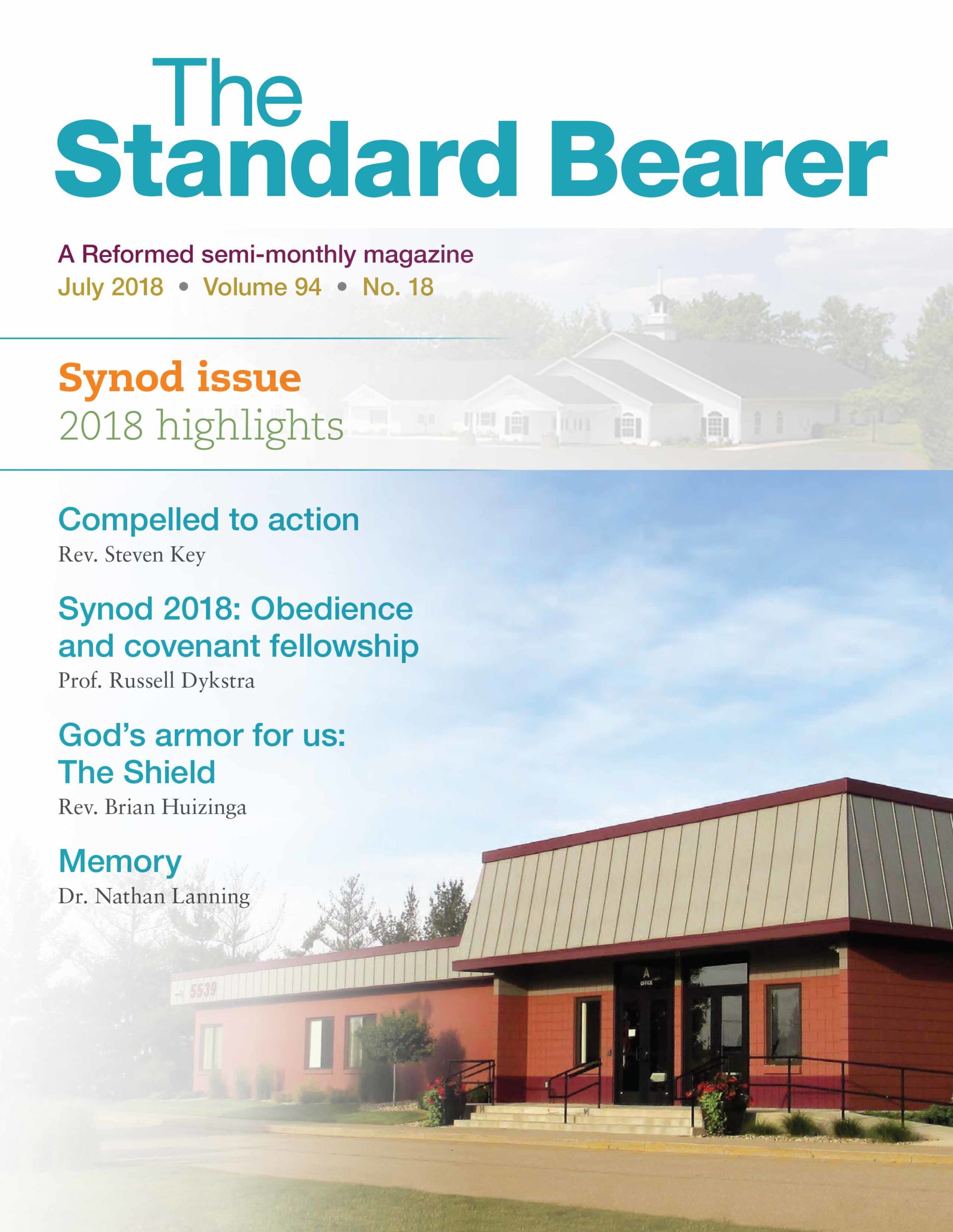