Thoughts On Our Golden Anniversary (2)

Thoughts On Our Golden Anniversary (2)

What, in that respect, is our situation one-half century after the beginning of our denomination?

In the first place, the generation which was at its strength in 1924 and which took an active part in the establishing of our denomination has almost disappeared from the scene. I am reminded of that every time I read or hear of the fact that another one of these “old timers” has died. There are not many of them left. And there certainly are few, if any, of them who still have an active role in the life of our churches. Our original leaders, of course, have been gone now for a good many years. Even of our ministers who were among the early graduates of our seminary there are but few; and it is a simple fact that there are not many years of service left to them. There are but five of our ministers who were ordained before I was, and the youngest of them was ordained in 1941. You will find, generally speaking, that the situation is the same among the elders—and also among the membership—in our congregations. The second generation of our Protestant Reformed Churches is on the scene and is in the front lines of battle.

And that also implies, in the third place, that the fourth generation is already putting in its appearance. They are the babes in arms and the little children in our congregations.

One generation passes, and another rises to take its place.

And this constitutes food for thought as we contemplate our 50th Anniversary.

It reminds us of the crucial importance of transmitting our heritage to succeeding generations, of passing on the truth faithfully to our children and our children’s children. We must teach them to know their history, and with that history the truth that was preserved and in which we were preserved. We must not assume that this will take place automatically through the preaching and through catechetical instruction in general. We must pointedly instruct them as to why we are Protestant Reformed and why they are Protestant Reformed children. We must not be satisfied to instruct them generally in what is “Calvinism” or what is “Reformed” or what is God’s Word (though it be completely true, of course, that “Protestant Reformed” is synonymous with all these), but we must specifically instruct them in what is Protestant Reformed and why it is Protestant Reformed. Moreover, we must do this very pointedly. We must sharply impress it upon their minds and hearts. We must “inculcate” it into them; that is, we must tread that ground again and again, must repeat that, instruction, until it is deeply and firmly impressed upon them. Do not be afraid of “over-kill” in this regard!

I am reminded in this connection of a negative and rather sad example from Old Testament history. You read of it in Joshua 24:29-33 and in Judges 2:6-13. The Book of Joshua closes with the suggestion that the fear and service of the Lord passed away in Israel with the passing of the generation which had entered the promised land. Joshua died and was buried; Eleazar, the son of Aaron, died and was buried; the bones of Joseph were buried. And it is already suggested in Joshua 24:31 that with the passing of that generation the fear and service of Jehovah also passed away: “And Israel served the Lord all the days of Joshua, and all the days of the elders that overlived Joshua, and which had known all the works of the Lord, that he had done for Israel.” And this is corroborated in Judges 2:6-13, of which I will quote only; the following: “And also all that, generation were gathered unto their fathers: and there arose another generation after them, which knew not the Lord; nor yet the works which he had done for Israel. And the children of Israel did evil in the sight of the Lord, and served Baalim: And they forsook the Lord God of their fathers, which brought them out of the land of Egypt, and followed other gods, of the gods of the people that were round about them, and bowed themselves unto them, and provoked the Lord to anger. And they forsook the Lord, and served Baal and Ashtaroth.”

If you are a student of history, you will know that what is recorded here is a rather general phenomenon in the history of God’s covenant. The history of God’s people in the world is characterized by alternating periods of strength and, weakness, of faithfulness and apostasy. Certain generations of God’s people are preeminently God-fearing. There is among them the knowledge of the Lord; the truth of God’s Word is maintained; and they walk in the ways of Jehovah. Other generations are characterized by ignorance, indifference, apostasy, and worldly-mindedness. You can note this phenomenon many times in both the old and the new dispensation. This does not mean that during a certain period all the individual members of the church are spiritual seed. It does not even mean that the great majority of them are spiritual seed. This is never the case; and it was not the case in the period of Joshua either, as is evident from the history. There were even strange gods among Israel at that time. But it means that the spiritual element at such a time is dominant. Partly, this is due to the fact that they are comparatively strong in numbers, as must have been the case with Israel in Joshua’s time after the 40 years of purging in the wilderness. Partly, this is due to the fact of historical circumstances. The generation of Joshua’s time had been eye witnesses of the work of the Lord. And partly, this is due to the fact that God gives to a certain generation men of influence. He gave to Israel a Joshua, an Eleazar, a Caleb.

But I wanted to point out especially that when that God-fearing generation passed away, the effect was apostasy. The next generation knew not the Lord and His works.

And what is the explanation of that apostasy?

True, at any given point in history there is only a remnant according to the election of grace present in the church in the midst of the world. This was true in Israel even in Joshua’s time. And thus it is always in the church. And always there is a large element of carnal seed. At this particular point in history the carnal seed was increasing again and gaining dominion. That was undoubtedly one factor.

But another factor that is suggested is that of the laxity of the remnant. The passing generation knew the Lord and His work for Israel. The next generation knew not the Lord, neither the works which He had done for Israel. This points to a failure in transmitting the knowledge of the Lord and His works to the future generation, as well as to a failure and laxity with respect to rooting out idolatry and the idolater from Israel. Remember that in Israel the false prophet had to be killed, and the idolater rooted out!

And the lesson of warning?

Do not be lax in transmitting the knowledge of the Lord and His works, specifically as we have learned to know these, to the generation to come. “Walk about Zion, and go round about her: tell the towers thereof. Mark ye well her bulwarks, consider her palaces; THAT YE MAY TELL IT TO THE GENERATION 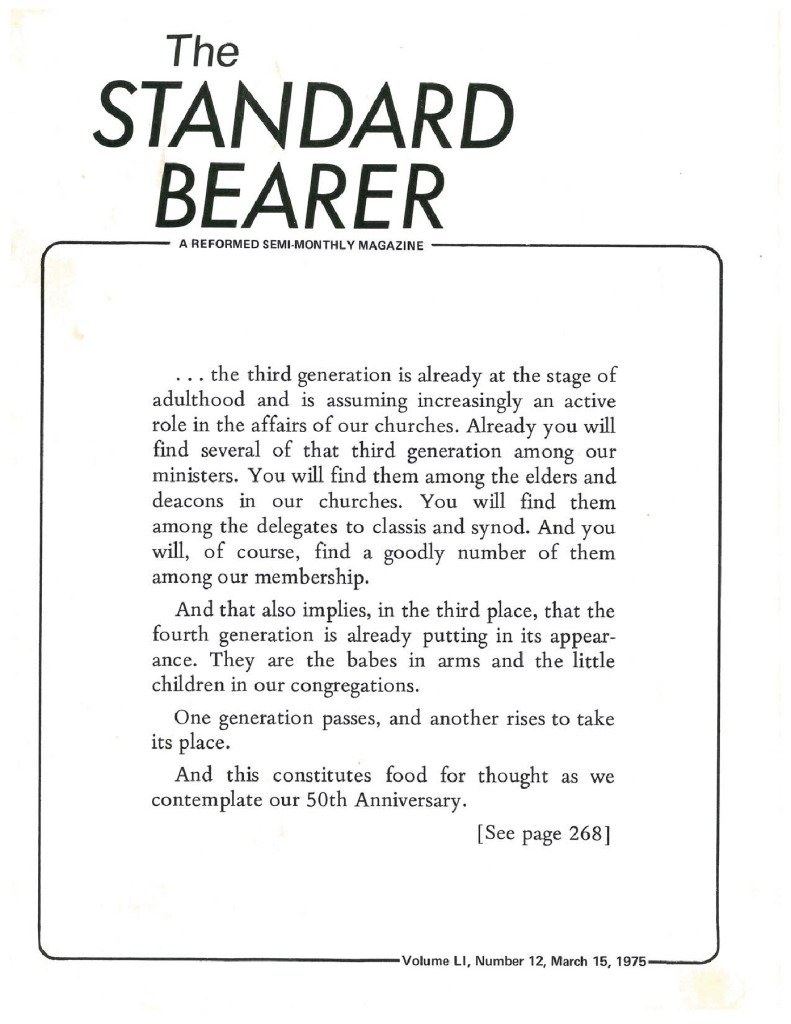