Thou Shalt not Commit Adultery

Thou Shalt not Commit Adultery

There are several Scriptures contained in the Law of Moses which bear on this sin and related sins. We quote them here as to their sense and meaning.

The general prohibition reads, “Thou shalt not commit adultery,” that is, Let no Israelite be unfaithful to the marriage vow and enter into illicit relation with another.

If a man be found committing adultery with a married woman, both shall be put to death, that the Israelitish people may be free from this evil. Likewise if the woman be a maiden betrothed to another man, if the act was committed within the city, both shall be put to death by stoning, she because it was possible for her, being in the city, to offer effectual resistance through her crying out, and he because he humbled his neighbor’s wife.

If a man find a young woman, betrothed to another, alone in an uninhabited place and ravishes her, the girl shall be innocent, for she had no way of resisting, but the man shall be put to death.

If a man seduce a virgin not betrothed, he must pay the usual marriage dowry and take her as his wife. If her father refuses to consent to the marriage, the man shall simply pay the dowry.

If a man seduce a virgin not betrothed, he must pay her father a marriage dowry of fifty shekels of silver and must take her as his wife and shall not put her away all his days. (The right of the father to refuse his daughter to the seducer is not here repeated).

If a man seduces a female slave, even though she is betrothed to another, but not set free, both shall be punished as the authorities determine, but not with death, for she was a slave and therefore subject to special laws.

A man shall not marry his stepmother, for it is an act of impiety toward his father.

In the public ritual of imprecation the priest shall solemnly declare: “A curse upon every man who marries his stepmother, or mother-in-law, or sister or half-sister,” and all the assembly shall say, “So shall it be.”

Marriage is forbidden between near kinfolk. It is illegal for a man to marry his mother, his stepmother, his full sister or half-sister, his granddaughter, his aunt, or the wife of his uncle, his daughter-in-law, his sister-in-law, his wife’s child or grandchild (by a previous marriage), or two sisters, while both are living, lest they be jealous of each other.

If a man marry his stepmother or daughter-in-law both the guilty parties shall be put to death. If a man marry both a mother and a daughter they have committed a shameful crime. All three shall be burnt to death, for such an unnatural act cannot be tolerated in Israel. If a man marries his half-sister, they shall both be destroyed and their punishment shall be a just reward for their sin. A man shall not marry his aunt, for they are near of kin and the consequence of their guilt shall be upon their heads. If a man marries his uncle’s wife or sister-in-law childlessness shall be the punishment of their sin.

No Israelite shall prostitute himself—as do the immoral Canaanites—in the service of a deity, nor shall the gains of that vile practice be brought into Jehovah’s temple in payment of a vow.

For one man to have intercourse with another as between the sexes, is an abomination to Jehovah. Both shall be put to death. The consequences of their guilt shall be upon their own heads.

Whosoever has sexual intercourse with a beast shall be put to death.

In the public ritual of imprecation the priest shall solemnly declare: “A curse upon any one who has sexual intercourse with any beast,” and all the people shall say: “So may it be.”

If a man soon after his marriage alleges that his wife, when he married her, was not a virgin, her parents shall lay before the elders of the city, as they sit in judgment at the gate, the evidence of her virginity. If they establish their claim the elders shall punish the husband with strips and impose upon him a fine of one hundred shekels of silver which shall be paid to the father of the girl whose reputation he has falsely attacked. The husband must also take back his, wife, and he may not put her away all his days. If however the charge was true and the wife’s innocence cannot be established, the men of the city shall stone her to death at the door of her father’s house, for she became a prostitute in her own home and only by these severe measures can the social purity of Israel, which was endangered, be preserved.

Let no Israelite degrade and disgrace his daughter by making her a public prostitute, lest the Israelitish nation become morally corrupted and an example of shamelessness rather than of righteousness.

The daughter of a priest who becomes a public prostitute, disgraces her father and his sacred office. For her sin she shall be burnt with fire.

When two men are fighting together and the wife of the one, in attempting to help her husband, resorts to indecent measures, her hand shall be cut off as a punishment. The authorities shall show no leniency, but vigorously carry out the sentence.

These are the laws that bear on the sexual side of Israel’s life. In their totality they show how all uncleanness whether in holy wedlock or in single life is accursed of God. As to adultery, it was a practice that had to be punished with death, if fully proven. And for guilt that could not be fully ascertained was prescribed the ritual respecting the trial and offering of jealousy, Num. 5:12-27.

If a husband suspects on good evidence that his wife has secretly committed adultery with another man, although he is unable to present any witnesses of the sin, he shall bring her with the proper offering to the priest of the sanctuary. Then the priest shall, seat her in the sanctuary before the Lord with her hair unloosed and with the meal offering in her hand. In an earthen vessel he shall mix dust gathered from the floor of the sanctuary with holy water; and before he gives to her to drink, he shall cause her to subscribe to the following oath: “If no man have lain with thee, and if thou hast not gone aside to uncleanness with another instead of thy husband, be thou free from this bitter water that causeth the curse; but if thou hast gone aside to another instead of thy husband, and if thou be defiled, and some man have lain with thee beside thine husband, the Lord make thee a curse and an oath among thy people, when the Lord doth make thy thigh to rot, and thy belly to swell; and this water that causeth the curse shall go into thy bowels, to make thy belly to swell and thy thigh to rot. And the woman shall say amen, amen.”

After the woman had taken the oath and it had been recorded in a book by the priest, he shall offer the meal offering and cause her to drink the potion. Then if she is guilty, it will affect her as specified in her oath and she will be despised by all because of her guilt; but if she is innocent, then she shall be free and shall not be harmed and shall conceive seed.

This whole rite concentrated itself in the oath. If there was freedom of guilt, it announced exemption from punishment. This on the one side. On the other side, it denounced the woman, if guilty and imprecated evil upon her—evil that should correspond to the sin which she had committed, namely, the decay of those parts of the body which had been surrendered to the service of lust. The bitter water symbolized the bitterness of the curse as operative in the body of the tried one, if there was guilt. Therefore the water was called bitter and also because it betokened the mental anguish which the consideration of being subjected to such a humiliating trial would occasion. Because the bitter water signified God’s holy reaction against sin, it was also to be holy water. Further, it was to be mixed with the dust of the sanctuary in token of its being used with regard to a curse. In the Scriptures dust and curse appear as associate. The serpent, having tempted Eve, was doomed to go on his belly and to eat dust all the days of his life. At Psalm 72:9, it is said of the enemies of God that they shall lick the dust. And at Micah 4:17, the nations appear as destined to lick the dust like a serpent.

Of course, the fulfillment of the prediction of corruption and unfruitfulness was dependent solely upon the will of God. But was the bitter water the bearer of the operation of the will or wrath of God in the bodily organs cursed. Did, in other words, the divine wrath operate in and through the water as its instrument of working? It seems so from the following statement occurring in the imprecation, “But if thou hast gone aside under thy husband. . . . this water that causeth the curse, shall go into thy bowels to make thy belly to swell and thy thigh to rot.” But perhaps the implication of this language is that the bitter water merely represented the curse. If more is implied the bitter water was more than a symbol,—it was then the very means by which the curse was realized. Be this as it may, the whole service was designed to convey “a deep impression of the jealous care with which the holy eye of God watched over even the most secret violation of the marriage vow, and the certainty with which He would avenge them.” 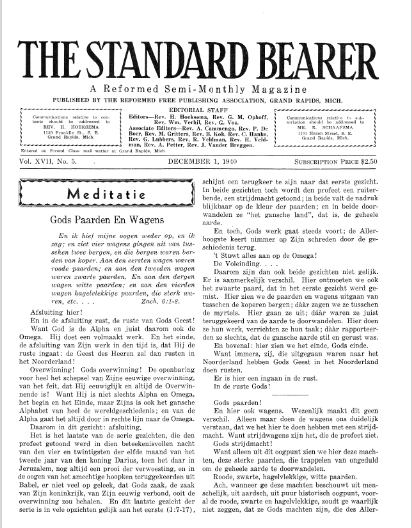