It is always a wonderful thing to find another who loves the sovereignty of God as the truth of God revealed in Scripture. It is especially wonderful to find such in the Middle Ages. Thomas Bradwardine, though little known, is such a man. If Gottschalk is rightly remembered in particular for his defense of sovereign predestination in the Middle Ages, Bradwardine ought to be remembered for his defense of the absolute sovereignty of God during the same era.1

Bradwardine was born in England sometime around AD 1290. He was a brilliant man, earning him the nickname “The Profound Doctor.” He produced accomplished works in many areas of study, including logic, geometry, and physics, and some of his works are still required reading for advanced research in math and science today.

But his main contribution was in theology, which he studied and later taught at Oxford. His great work as a theologian is De Causa Dei (The Cause of God), which was written against the Pelagians prevalent in his time. The title helps us know not only the content of the book, but also Bradwardine’s own view of his role in God’s kingdom in the thirteenth and fourteenth century. Bradwardine rightly viewed himself as a defender of the sovereignty and supremacy of God in the midst of a philosophical climate that exalted man and dethroned God. Gordon Leff describes Bradwardine’s purpose with the book and his life: He was “concerned to cut, root and branch, at that outlook which started from men, not from God…to rebut the consequences which flowed from such a wrong attitude and to win back all attention to God.”2

The philosophical climate in which Bradwardine’s book appeared was thoroughly Pelagian. And although such Pelagianism in the fourteenth century arose out of a different source than the Pelagianism of Augustine’s day, it was, at the end of the day, the same Pelagianism theologically: the fall did not affect man, his will is free, God is not sovereign, and salvation can be merited by man apart from grace or with assisting grace. The fourteenth century saw a battle between faith in God’s Word and faith in man’s reason apart from God’s Word, a battle that is constant in the history of the church. Many philosophers of the thirteenth and fourteenth centuries placed man’s reason above the Word of God as the source for truth. They argued that the Scriptures were subject to the same limitations they were: the minds of the men who wrote them could not get above what they sensed. Further, since man’s reason can only firmly grasp what can be received by the senses, and since God cannot be grasped by the senses, there arose a certain skepticism concerning who God is and what could be known about Him from the minds of the men who wrote Scripture or from their own minds now. His existence was not denied, but man’s ability to know about Him with certainty was questioned. The only thing reason could independently arrive at concerning God was that He was powerful. And since He was powerful, they thought, He could do whatever He wanted, including go against what the men who wrote Scripture thought He was going to do. In fact, some went so far as to say God could commit what the Bible calls sin.3

In such a philosophical setting, of course, the teaching of man’s free will and natural ability found fertile soil. To the point that it influenced the teaching of many in the church to return to the Pelagian, man-exalting errors that had already been condemned in the past. So much so, that Bradwardine’s experience in his university days was, “I rarely heard anything of grace said in the lectures of the philosophers…but every day I heard them teach that we are masters of our own free acts, and that it stands in our power to do either good or evil, to be either virtuous or vicious, and such like.”4 So much was Bradwardine under the spell of this man-exalting philosophy that he says, “When I heard now and then in church a passage read from the apostle which exalted grace and humbled free will, such as Romans 9:16, ‘Therefore it is not in him that willeth nor in him that runneth, but in God that showeth mercy,’ I had no liking for such teaching.”5

But the fact that he did not simply dismiss such Scriptures (read as part of the liturgy of the church) but fixated upon them, even if in repulsion, was itself a sign of God’s working in this man. Before too long, he could not resist the truth of God’s sovereignty anymore as revealed in His Word, and God humbled him especially through that verse he once despised, Romans 9:16. “But afterwards, the truth before mentioned, struck upon me like a beam of grace. It seemed to me as if I beheld in the distance, under a transparent image of truth the grace of God as it is prevenient both in time and nature to all good works.”6

After this deep work of God in his soul, Bradwardine was zealous to defend at any cost the truth of God’s sovereignty he found in Scripture.

I burn with ardor for God’s cause, knowing that I thrust my hand into a terrible flame, for I am not unaware how the pestilential Pelagians are wont to harass an agitated mind with tumult and abuse, and how they will strive to tear this small treatise [only 900 pages] with their savage teeth.7

Hence, the title of his book, The Cause of God.

Bradwardine taught that God was in absolute control over all that happened in time. He left no room for man’s will to be free in any sense. There are no equivocations, no points where Bradwardine backs down. God is in absolute and determinate control of all. His eternal will particularly, Bradwardine taught, determined all that would happen in time. That will, he believed from Scripture, was free from any influence other than His own holy character.8 Out of this, Bradwardine concludes that nothing can move without God, and that only God can be the direct mover upon any creature. God is the cause, the preserver, and even the chief co-actor in every movement of His creation. In fact, Bradwardine would not even abide the language of permission with respect to the will of God: “It would not be enough for God to permit them to do wrong (speaking of Lucifer and Judas) for His will is active, and regulates all that happens among His creatures.”9

From that starting point Bradwardine went on to dismiss any notion of independence or merit in man’s works. He taught in accord with Scripture that man was not only under God’s total control, but also that man after the Fall was so totally depraved he could not even have a good intention apart from grace.10 Significantly, Bradwardine went on to teach that since there is no good in the infidel, and God’s grace does not come to the infidel, “he cannot carry out a good action, and all the works of infidels are sinful.”11 Whereas the Pelagians taught that the Fall had no effect upon man, so that man could will the good and merit salvation by his freedom, Bradwardine taught that man’s will is enslaved to sin, so that man can do nothing to lead God to turn a sympathetic eye to him as a worthy object of grace.

So depraved is man and so reliant is man on grace for anything good to come from him, Bradwardine taught, that even the good works the Christian does cannot be attributed to him ultimately, but to God who works in him to produce that work. Bradwardine explains that in any good work, God directly moves the will to desire to do the work, and then takes the will by the hand, as it were, and leads it to do the work. “He operates that we should wish; when we so wish…He cooperates that we should perfect our wish.”12

Consequently, over against Pelagianism, Bradwardine also taught that justification was by grace alone through faith alone, and not by works. “Faith alone can make us justified: works have no part to play in achieving that which comes from Him alone.”13 If every work that man does is a result of God’s predetermined will, how could man merit anything with God by what he does? And if every good work performed by one predestined to glory is a result of God’s sovereign grace in him, how could such a work merit justification?

Bradwardine does speak of the works of those in whom God operates by His grace as meriting other rewards, but he explains these as rewards grace has produced. Bradwardine taught that the objects of God’s favorable will were those whom He had chosen from eternity to glory. And he taught that God actively determined from eternity the destruction of the reprobate. He also taught that the ground for God’s choice of one unto eternal life as opposed to eternal death was nothing in man, for man could do nothing to set himself apart as a worthy choice. “God does not predestine an individual because He foresees that he will make good use of this free will, for this would make God’s knowledge passive, and His actions subsequent to those of His creatures.”14 And again, Leff informs us that Bradwardine believes, “It would be absurd to think that justification and reprobation depend upon anything temporal.”15

That does not mean, however, that Bradwardine dismissed other illuminated human minds that understood God’s mind in Scripture, as God has given those minds to the church down through the ages. Bradwardine had respect for the history of the church; only he dismissed the teaching that set man’s mind above the clear Word of God. Chiefly, Bradwardine built upon the theological thought of Augustine, who better than anyone in the early church understood the theology of the New Testament. In fact, Bradwardine viewed himself as something of a new Augustine, fighting Augustine’s battles over again. He, like Augustine, once believed in the free will of man. And he, like Augustine, was drawn by the Spirit to understand the sovereignty of God, and defend it.17

Although in God’s providence Bradwardine was not used to start a great reformation of the church, his work did influence the later pre-Reformers and the Reformers themselves. He certainly anticipated Luther’s Bondage of the Will and Calvin’s defense of the sovereignty of God. And there is good reason to think that his influence went beyond the Reformation into the sixteenth and seventeenth-century battle against Arminianism.18 His most immediate influence was on Wycliffe, however, who is reported to have viewed Bradwardine as his spiritual father.19 It is to this man that this special issue of the Standard Bearer turns next.

1 Something Gottschalk, of course, also defended.

8 Bradwardine uses the illustration of an architect who sees and determines something in his mind, and then by means of his will and word brings it to pass precisely as he had determined.

9 Leff, 46. He did, however, carefully defend the notion that God is not the author of sin, even as he maintained this strong position regarding God’s sovereignty. See Leff, 58-64.

19 The reporter is Augustus Toplady. 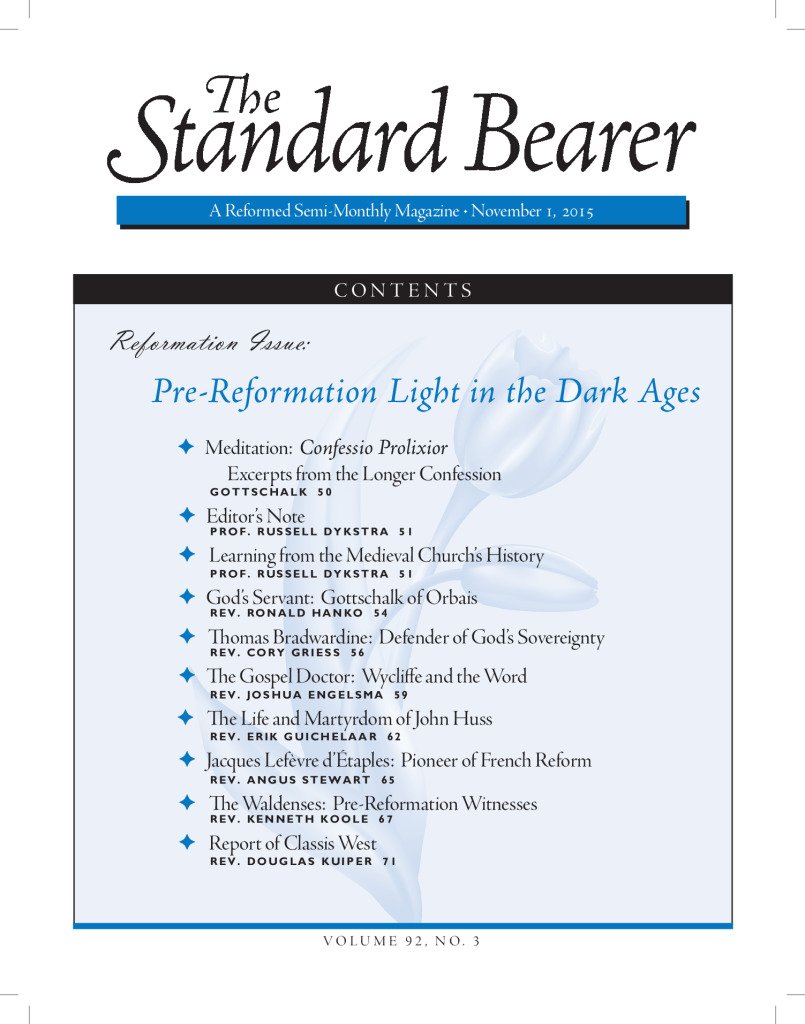