For nation shall rise against nation . . . and there shall be famines and troubles; these are the beginnings of sorrows.

Nothing is older to man than his struggle for food. From the time the early hunters stalked the mammoths and the first sedentary “farmers” scratched the soil to coax scrawny grain to grow, man has battled hunger. History is replete with his failures. The Bible chronicles one famine after another; food was in such short supply in ancient Athens that visiting ships had to share their stores with the city; Romans prayed at the threshold of Olympus for food.

Where would you conclude the above quote comes from (including the Scriptural reference)? One might, at first glance, conclude that it came from some religious periodical. Not so. It rather introduced a striking article on famine and food shortages and appeared in Time of Nov. 11, 1974.

I have in earlier articles both quoted from Time and referred to the growing food shortages and famines. At the risk of appearing repetitious and even boring, I would call your attention to this subject again. I do so because the news media and the secular press has been doing this. And especially striking does their treatment of the subject become when these quote from Scripture the very reference of one of the signs of the end of time! Is the secular and worldly press recognizing the hand of God in all this? Probably not. Likely Scripture, when apparently pertinent, is quoted in the same manner that Shakespeare is. Yet it remains striking when one sees Scripture quoted at the head of an article appearing in a secular and worldly magazine.

Time points out, correctly, that there have been famines throughout the ages of the world. These are recorded in Scripture—we think of Abraham in Egypt because of famine; and mention is made of a later famine in Abraham’s days as well as in the days of Isaac. History is filled with instances of terrible famines in specific localities.

Recently, famines again have been prominently presented in news reports. Who has not seen the shocking pictures of the poor in Bangladesh standing in line to get a pail of watery gruel? Who has not seen the pathetic pictures of children with distended stomachs—at the point of death? Time reports, “Then, in the past two years, this optimism turned to despair as hunger and famine began ravaging hundreds of millions of the poorest citizens in at least 40 nations. Much of the ground gained in the battle for food seemed lost as the world’s harvest in 1972 was roughly 3% short of meeting demands. This year’s harvest has also been disappointing, and experts now question whether man can prevent widespread starvation.” (Time, Nov. 11, 1974). Time continues by reporting some of the figures of the current problem:

Then came 1972. Bad weather started to plague so much of the world’s crop land that many experts conclude that the climate itself is changing. Harsh winters, droughts, or typhoons cut output in the Soviet Union, Argentina, Australia, the Philippines and India. Off the coast of Peru, a change in ocean currents and overfishing decimated the anchovy catch, a major source of protein for animal feed. In Southeast Asia and parts of Africa, the peanut crop—providing mainly animal feed and cooking oil—fell far below normal. All told, the world% food output dropped for the first time in 20 years, down 33 million tons, from 1,200 million tons. Merely to meet the added demand of increased population and rising living standards it should have increased by at least 24 million tons.

The Time article continues by suggesting that even the experts see little or no reason to hope for improvement of the situation. These see only that the problem will become aggravated.

No economist sees any way that the developing nations will have enough money even for the food. Nor can they rely on aid. Though the U.S. has given away $25 billion worth of food in the past two decades, the American people will probably not support large aid programs if prices at their neighborhood supermarkets remain high. It is also uncertain whether the world has enough ships, trains and trucks to move such quantities of grain.

This grim prognosis has led to apocalyptic warnings from some of the world’s top food experts. “We will see increasing troubles, not declining troubles,” predicts Dr. John Knowles, president of the Rockefeller Foundation. “We will see increasing famine, pestilence, the extermination of large numbers of people. Malthus has already been proved correct.” The most vulnerable to such disasters: India, Pakistan, Bangladesh, the Sahel nations, Ethopia, Northeast Brazil, the high regions of the Andes and the poor parts of Mexico and Central America.

The concern about famine conditions represents only a beginning of problems. Many have pointed out that shortages and famines likely result in political instability, loss of “liberty”, beginning of dictatorships. One man stated, “You cannot have political stability based on empty stomachs and poverty. When I see food lines in developing countries, I know that those governments are under pressure and are in danger of falling.” Recently, too, Secretary of State Kissinger, warned that even in our own country with increasing inflation, concern about food prices, there is a real danger of a change of government and dictatorship. A person is ready for change when problems seem overwhelming. At least in part, this explains the rise of a Hitler in Germany. The same can easily arise in nations today.

Though many see little hope of real solutions, some have nevertheless been suggested. Recently, we have heard of a World Food Conference which had been held in Rome. Not much seems to have come from that—except rhetoric. Some solutions suggested were: 1. the stockpiling of grain to prepare for future shortages; 2. an “early food warning system” to give advance warning concerning impending shortages; etc. Other solutions are being suggested, too. Presumably, only half of the world’s arable acres are being presently used. That could be increased. It has been suggested that more fertilizers be used (but these fertilizers are already in short supply). More irrigation might help. One must also improve food distribution and storage (25% of the world’s food “disappears” between the field and the table). Develop new varieties of crops. Study possibilities of using different kinds of edible foods. Then there is the “stork-farmer” race. The solution proposed is increased population control.

Those are some of the solutions. Man will try many things in order to overcome the disasters which befall him. Sometimes, it seems, man in his inventiveness does for a time find solutions. More often than not, man’s cleverness appears to “backfire” when the situation becomes worse for the meddling of man.

But in all of the proposed “solutions,” God is left from the picture. That His hand is seen in all of this, is ignored or denied by man. Man blames the “population explosion”. He has theories of “changing weather patterns”. He suggests “chance” or “accident” as the explanation of what befalls man. And that too, even when he quotes from Scripture pertinent passages which foretell all of these things.

The child of God does see the Word of God being fulfilled. Famines have always taken place. But before, these were not usually brought to the attention of the peoples of the whole world. And if only by virtue of the larger numbers of people on the earth, there are today many more people affected by famine than ever before in history. The famines which occur are being brought to our attention via television and newspaper and magazine. Now, even while filling our stomachs with the abundance which we still enjoy, we can watch the pathetic multitudes, presented in the news broadcasts, dying before our eyes because of a lack of food.

The result of famines is that another of the prophecies of Scripture is being fulfilled. There is not only the black horse (famine) of Rev. 6, but also the pale green one. The latter represents death in its various forms. For the past few years, it seemed as though man had succeeded in prolonging the life-span of man. The average age of man was increasing. But the past few years, this has changed. Time mentions, “Indeed, in parts of Central America, in ten sub-Saharan nations and in some rural areas of India, the 20-year trend of declining death rates and infant mortality is being reversed. Death rates are rising. . . .”

So, God’s Word is proving to be so very true. Nor ought the child of God be frightened at beholding this fulfillment. We know that all these things must be—before our Lord returns on the clouds of heaven. Perhaps we will be seeing much of this famine in the days to come. How long all this will last, we do not know.

And what ought the child of God to do? How can he “help” in these times of famine in many lands? One must take care lest he be caught up in the foolish fads of man. There were reports the very day this article is written of college students conducting a day-long fast—to find out how it feels to go hungry and to contribute the money saved to famine relief. Yet we do have a calling. It is difficult, almost impossible, for an individual to do anything that might help; in fact, it is difficult even for a small denomination such as ours to be able to assist in foreign lands. Yet perhaps our diaconate ought to investigate this matter. Like the church at Antioch which took collections for the famine-affected Jerusalem church, so also perhaps we could seek to help the saints in other lands in their need. Our assistance, I think, ought not to be directed promiscuously to famine areas—but specifically toward the saints of Christ who are in need. The church in the early New Testament age did that.

And if there are ways in which we can help, let us not forget that the famines themselves are part of the signs of the end of the age. The time shortly comes when our Lord returns. Let us be sure that we watch. 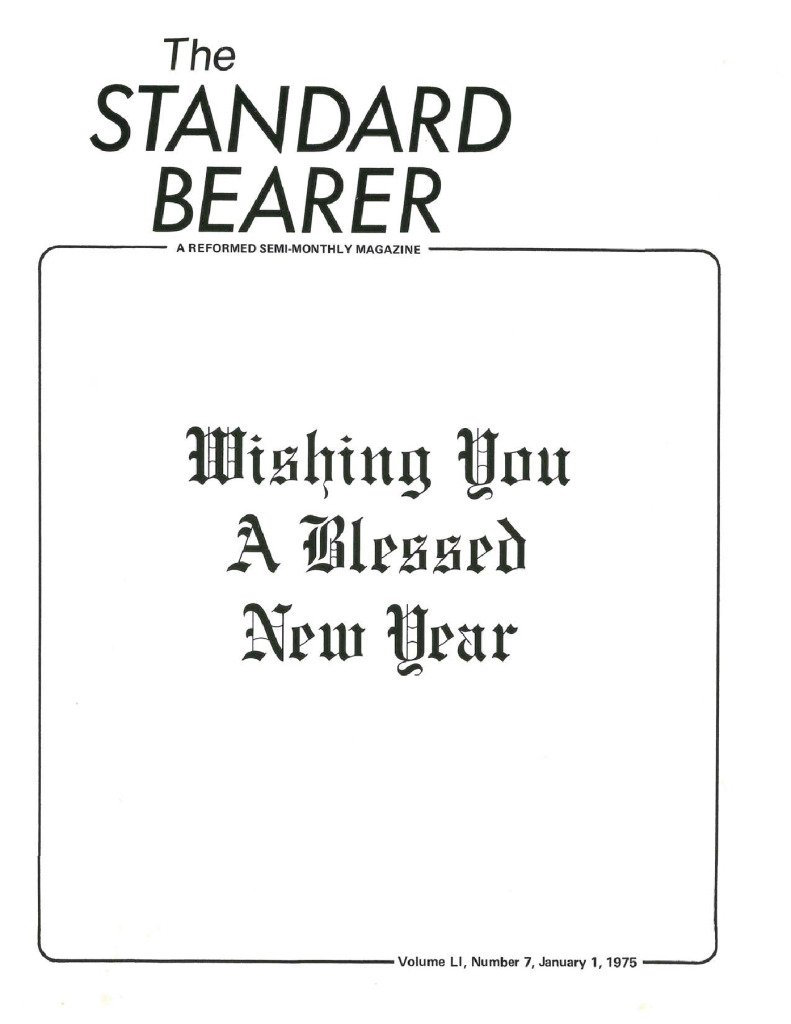