The Wiersinga Case in the GKN

The Wiersinga Case in the GKN

Are things changing in the Gereformeerde Kerken of the Netherlands? It it true that there is a change for the better? There seem to be those who are persuaded of this. For one thing, at more than one synod of sister churches of the GKN the fraternal delegates of the latter have sounded a conciliatory and persuasive note. They have expressed appreciation for the concern and the warnings of their sister churches. They have been concerned to assure their sister churches that the GKN are dealing with the various problems and errors which plague them and to plead for patience and understanding on the part of their sister churches. And in more than one instance the latter apparently have allowed themselves to be persuaded and have not suspended or cut off their relationships with the GKN.

In close connection with this, others have hailed the recent decision in the Wiersinga Case as a step in the right direction and as evidence of a desire to maintain the Reformed truth. To refresh your memory, let me remind you that Dr. Wiersinga, a student-pastor in Amsterdam, in his doctoral thesis (he received his degree from the Free University’s theological faculty!) denied the very essence of the gospel by denying the atoning character of the death of Christ. He denied that Christ in His death on the cross bore the wrath of God against our sins in our stead. As has so often been the case with recent errors in the Netherlands, this was an open-and-shut case. There was no doubt whatsoever that this was Wiersinga’s teaching. There was no subterfuge, no weaseling with words. Wiersinga’s position was very plain Neither he nor anyone in the GKN denied that this was his teaching. This-is not to say that there were not many who agreed with Wiersinga; there were, and still are, many supporters of Wiersinga’s views—views which really amount, in my opinion, to the old error of the moral theory of the death of Christ in a new dress. But the fact of Wiersinga’s contradiction of the Reformed confessions was recognized by all. Moreover, also the seriousness of Wiersinga’s error—an error which denied the very essence of the gospel—was immediately recognized by the Synod of the GKN: for when the case first came to the attention of the Synod a few years ago, it felt impelled to assure the churches in a pastoral pronouncement that the GKN maintained the confessional doctrine of Christ’s atonement.

Meanwhile, as has become customary in the GKN when heresies have arisen in the churches, the Wiersinga Case was put on the long, slow ecclesiastical track. Committees dealt with the matter, consultations with Wiersinga were held, vain attempts were made to get Wiersinga to modify his position somewhat and to concede that the position of the confessions was also true or at least that he would not contradict or militate against that position. But all was in vain. Ultimately the Synod of the GKN had to come to grips with the case and reach some kind of decision.

A few months ago such a decision was reached. It is called a “judicium.” This term has reference to a clever distinction which has recently come into vogue, the distinction between jusicial and justitialpronouncements and decisions. The former kind. of discipline involves a pronouncement concerning doctrinal issues and concerning the question whether or not a given teaching is heretical (although “heresy” and “heretical” are terms which are avoided nowadays in the GKN), while a justitial pronouncement would involve actual disciplinary recommendations or actions against the heretic himself. In Wiersinga’s case, for example, a justitial pronouncement would have involved a recommendation that Dr. Wiersinga be suspended and/or deposed from office in the GKN.

This “judicium” (the entire decision was rather lengthy and cloaked in considerable ecclesiastical gobble-de-gook) stated in substance that Dr. Wiersinga’s denial that Christ bore the wrath of God against the sins of His people is “not permissible” (niet toelaatbaar) in the Gereformeerde Kerken.

On the surface of it, this appears to be both a correct and a firm stand. And there have been many, both in the Netherlands and elsewhere, who have hailed this decision as clear evidence that the GKN do not want to forsake the faith of our fathers and will not tolerate a denial of the very heart of the gospel. They seem to think that when it really gets down to basic issues and unavoidable decisions, the Dutch churches are of a mind to be Reformed.

We believe that the GKN are continuing the same policy which they have followed for several years and which has made them, in effect, into a dialogue church or a modalities church. That policy is exactly that of making pronouncements on various doctrinal matters, but not enforcing those pronouncements. And the motivation, supposedly, is the desire to keep the denomination together and to avoid any kind of ecclesiastical conflict and separation. The effect has been that heretics such as Kuitert and Baarda and Wiersinga simply thumb their noses at Synod and its decisions and continue merrily to follow their heretical course. And the more it becomes evident that Synod will never recommend or take any disciplinary measures, the more bold these heretics become.

We agree with the Rev. H. J. Hegger, who stated the following in the March 13 issue of Waarheid + Eenheid under the title, “Synod Allows the Unallowable.” We translate:

“We are glad that synod has expressed that the denial of the substitutionary suffering and death is “not permissible.”

“We are the more upset because synod did not decide on concrete measures to counteract that error. It indeed expressed the expectation (and “expectation” is the term synod used HCH) that the church of Amsterdam (and other ecclesiastical organs) opposes, this denial. But this expectation is vain, because the church of Amsterdam had already declared that it will not take any disciplinary measures against Dr. Wiersinga. It also appeared from the discussion which led to this expression of synod that in any event the majority wanted nothing of a disciplinary procedure; this according to the lead article of Trouwof March 6.

“A synod which declares of an error that it is not permissible in our churches, and which nevertheless allows that error by reason of the fact that no single disciplinary measure is taken against the promulgators of that error, condemns itself.

“One measure which the synod at the very least would have to take would be to break with the Council of Churches of the Netherlands, of which also the Roman Catholic Church is a member. The latter teaches exactly the same impermissible error as does Dr. Wiersinga in its New Catechism, which appeared with a recommending foreword by the Netherlands bishops.

“But also that did not happen as a result of the decision. Apparently the synod finds it more important to keep the Roman Catholic Church as a friend than to be faithful to the Head of the Church, Jesus Christ.”

Meanwhile, Dr. Wiersinga has already left the GKN far behind. Long before the Dutch Synod had made a pronouncement concerning this heresy, Dr. Wiersinga was already denying that God is a punishing God, that we may say that by sending suffering and sorrow and various awful things God wants to purify us, by denying that God has anything to do with causing suffering, and by teaching that God is only a God of compassion, love, and mercy. And I suppose that eventually there might have to be another “judicium” on this subject. 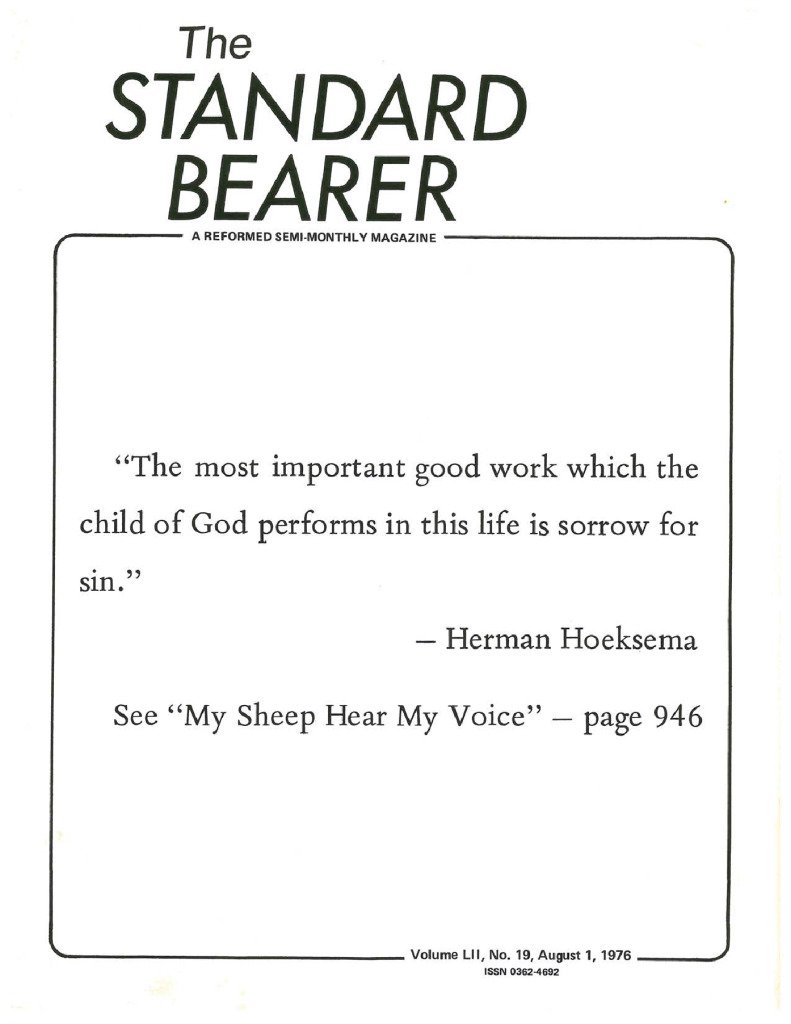