Now our own country is involved in World War II, it may be of interest to pass in review the main events of this tremendous conflict.

The first year of the war was on the whole characterized by the “Blitzkrieg” of Hitler’s forces in which the German mechanized forces scored brilliant victories, partly because of their overwhelming power and thorough preparedness over against the unpreparedness of Great Britain and France, partly because of repeated surprise movements of the German army in connection with a ruthless trampling under foot of the rights of smaller nations.

The war was started when Hitler ordered his forces into Poland on Sept. 1, 1939. The invasion of Poland became the occasion for a declaration of war against the German Reich by Great Britain and France, Chamberlain and Daladier being the prime ministers of those countries respectively at that time. Poland proved practically powerless against the onslaught of the German mechanized forces. The blitzkrieg there was soon finished, and Poland unconditionally surrendered on Sept. 27, 1939.

In the meantime Russia invaded Finland and started a war with that small but brave nation. At that time the Russian bear certainly did not leave the impression of great military strength and leadership. This war lasted until the early spring of 1940.

In the same spring Hitler launched a new series of surprise attacks. The allied forces appeared to feel rather secure behind the supposedly impregnable Magi- not line. But the German government began to invade, occupy and establish so-called “protectorates” in the smaller countries along the west coast of Europe. Denmark and Norway were overcome practically without a struggle; the Netherlands put up a fight which was as bloody and brief as it was hopeless; and through the Lowlands Hitler united with his forces in Belgium and Luxemburg, which soon had to give up the struggle against the overwhelming power of the German army. This gave the Fuhrer the opportunity to circumvent the famous Maginot line, and to meet the French and British forces, the latter of which were driven to Dunkirk, while the former were quickly overcome and forced to sue for peace. Soon after the German forces occupied Paris, marshal Petain became Premier of France, and on June 24, 1940 the terms of the German-Italian armistice were accepted and signed. German-Italian terms they were, for when France was almost defeated, on June 10, 1940, Italy had the very questionable courage also to declare war on France.

About this same time Russia became active again in eastern Europe and seized Bessarabia and Bukovina in Rumania. And on July 3, 1940 the British seized or destroyed a considerable part of the French Fleet, lest it might fall into the hands of the Axis powers.

It must not be forgotten that during this time Great Britain established a rather effective blockade of the continent of Europe, while German submarines wrought havoc with the British merchant marine and sent thousands of tons to the bottom of the ocean.

This may be considered the end of the first period of the war.

It marks practically the end of the German “blitzkrieg” methods. And it is not impossible that about this time, in August 1940, the German dictator made the great mistake that may ultimately prove to be one of the main factors in his defeat. We refer to the fact that he failed to invade Great Britain. At that time England was hardly prepared to resist a German invasion successfully, had it been attempted. A determined attempt to invade the British Isles, however, was not risked by the German Government. Instead they began, in August 1940, a series of air attacks on England, which caused great destruction, but which failed to accomplish anything else than to strengthen the British morale, and to stiffen their determination to fight to the bitter end. In this determination they were encouraged and constantly upheld by the bulldog tenacity of their new Premier, Winston Churchill.

The “blitzkrieg” was over. Time was in favor of England, which from now on grew stronger every day. And the possibility of a successful invasion of the British Isles became more remote, as the English defenses grew stronger. And in this she was soon materially aided by supplies from the United States.

In the fall of 1940 Japan, Rumania, and Slovakia joined the Axis alliance. The British began an offensive in northern Africa and scored a series of victories over the Italian forces there. By the early part of 1941 they had extended their victorious march in Libya as far as Bengasi. Later the British were driven back into Egypt by the German-Italian forces. But recently, as we know, the British renewed the offensive and once more are victorious over the Axis forces in that section of the war area.

Defeat was suffered by the Greeks. This Balkan State was invaded by the Italian army on Oct. 29, 1940. But without the aid of the German military machine the Italians do not make the impression of a strong power; and, humanly speaking, they would have suffered complete defeat at the hands of the Greeks, had it not been for the aid of the Germans. However, against the combined attack of the German-Italian forces the Greeks, even though aided by a small expeditionary force of the British, could not stand. The conquest of both, Yugoslavia and Greece was finished on May 28, 1941, and soon after the island of Crete in the Mediterranean was abandoned by the British.

In the meantime our own government slowly but surely forsook its original neutrality attitude. The slogan became more and more “all out aid to Great Britain.” A tremendous step in the direction of our own involvement in the war was taken when the Lease- Lend Bill was passed and signed on March 11, 1941. On July 7 of the same year the United States occupied Iceland. A little more than a month later our President met Mr. Churchill and they announced to the world the eight point charter. When the Axis powers began to attack our ships, the President on Sept. 14 ordered the United States Navy to shoot at sight.. Virtually we were already in the war, though officially no war had been declared.

Thus the second phase of the war was characterized by the absence of any brilliant successes on either side. It had become evident that the war would not be finished as it had begun, but that it might develop into a struggle that would last a long time, and that would ultimately be won by the side that could afford to abide the time when the other side would be exhausted.

Perhaps we may say that the war entered upon its third phase when Hitler began to invade Russia on June 22, 1941. And when the history of this war is written, it will probably call this attack against Russia another of Hitler’s major mistakes. In the beginning of the Russian campaign and till recently this was not so apparent. It was hardly expected that Russia would hold out against the German war machine. Her campaign against Finland had not inspired confidence. Besides, little Finland saw an opportunity to regain some of her lost territory, if not to take revenge upon the Russian bear, and entered into the conflict as an ally of Germany. And although the Germans, no doubt, from the very beginning of the Russian campaign suffered heavy losses, both in men and material, they were, nevertheless, victorious and steadily advanced toward their objective. But in recent weeks the tide has evidently turned. Even though the Russian reports, no doubt, are exaggerated, the German forces are surely in retreat. Berlin announced several days ago that they abandoned the project of capturing Moscow before winter. But the Russians launched a counter offensive that has driven the Germans back for several miles. It can no longer be doubted that the Russian campaign is a failure, and may well turn out to be one of the decisive defeats of the war for the Germans.

The development of the war, then, seems to reveal that the Axis powers are gradually but surely weakening. Blitzkrieg and brilliant successes were characteristic of the first period. A slowing down on the part of the Axis forces and an increase in strength on the part of Great Britain became noticeable in the second period. In Libya the British are victorious. In Russia the Germans are retreating, and the Russian campaign appears to become an expensive failure for the Axis powers.

And now Japan has entered the war on the side of the Axis.

We all know of the peace talks that were carried on in Washington, and of the sudden and treacherous attack of the Nipponese on Pearl Harbor on Dec. 6 ‘last.

Then, on Dec. 8 our government declared war on Japan. And a few days later Germany and Italy declared war on the United States. After the attack by Japan on Pearl Harbor, the war-declaration by the Axis powers hardly made an impression. 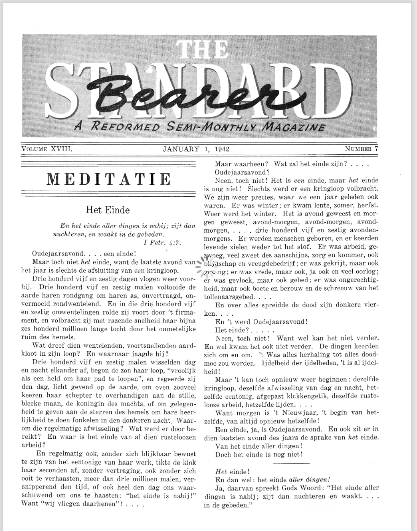