The Vile Sin of Homosexuality (2)

The Vile Sin of Homosexuality (2)

This is disputed in evangelical circles today. Some frown on homosexual deeds, but refuse to condemn, as sin, homosexual inclination and desire. They suppose that certain men and women are born with homosexual tendencies; this is part of their make-up, their very nature. From this, they conclude that these persons cannot be held responsible for their condition. Their sexual desire for one of their own sex may be a “disordered” condition, due to the general disorder caused by the fall into sin; but it is not sin.

The evangelical, German theologian, Helmut Thielicke, advances this view in his influential treatment of homosexuality (The Ethics of Sex: Harper & Row, 1964, pp. 269-292). The chapter title gives it all away: “The Problem of Homosexuality.” Thielicke speaks of an “endogenous,” or “constitutional” homosexuality, which Scripture, supposedly, knows nothing of. This is a condition, according to Thielicke, which is “largely unsusceptible to medical or psychotherapeutic treatment, at least so far as achieving the desired goal of a fundamental conversion to normality is concerned.” Is is, for the most part, “incurable.” This condition may not be condemned as sinful:

The predisposition itself, the homosexual potentiality as such, dare not be any more strongly depreciated than the status of existence which we all share as men in the disordered creation that exists since the Fall(post lapsum). Consequently, there is not the slightest excuse for maligning the constitutional homosexual morally or theologically..

In fact, although the homosexual should first be exhorted to seek treatment of his questionable condition, when it becomes clear that this condition is incurable, the homosexual condition must be accepted. This means “to accept the burden of this predisposition to homosexuality only as a divine dispensation and see it as a task to be wrestled with, indeed—paradoxical as it may sound—to think of it as a talent that is to be invested”

Thielicke’s lead is enthusiastically followed up by Letha Scanzoni and Virginia Ramey Mollenkott, widely hailed as authors.” “two outstanding evangelical In a book, IsThe Homosexual My Neighbor? Another Christian View (Harper & Row, 1978), they assert that, in Romans 1, “no reference is made to persons whose own ‘nature,’ or primary orientation, is homosexual, as that term is understood by behavioral scientists” (p. 65). “The Bible,” we are told, “is silent about the homosexual condition, ‘ ‘ so that “those who want to understand it must rely on the findings of modern behavioral science research and on the testimony of those persons who are themselves homosexual” (p. 71). On these bases, Scanzoni and Mollenkott instruct evangelical Christendom that there are persons who are born with a homosexual nature; that this condition should not be regarded as abnormal, but as analogous to being born left-handed; that the homosexual nature is not an illness, for “in the overall, homosexual persons are as psychologically healthy and as well integrated into society as heterosexual persons are” (p. 85); that the real problem very likely is not the homosexual, but the heterosexual who refuses “to grant full human acceptance to homosexual persons” (p. 86); and that, if sin is involved at all, it is not the homosexual who is guilty, but the Christian who condemns homosexuality—he bears false witness against his neighbor! (p. 87) Thus do these two outstanding evangelicals manage to put themselves fully under the Divine woe of Isaiah 5:20, not only calling evil good, but also calling good evil.

The refusal to condemn homosexual nature itself as sin, with homosexual practice, is grievous error. It is this, both practically and theologically. Practically, it opens up the way to an inevitable approval of homosexual acts and, thus, the sanctioning, in the Church, of practicing homosexuals and the assuring of such persons, by the Church that they too are pursuing the holiness without which no man shall see the Lord, If the desire is unrebukeable, how can the carrying out of the desire be condemned? One can still condemn certain forms of homosexual behavior; but he can no longer condemn homosexual practice as such. If the inclination is justified, or at least not blamed, on the ground that the man, or woman, was born with such a physical or psychological bent, the exercise of this inclination demands justification on the same ground, especially as regards the powerful and significant reality of sex.

Also, this view weakens the hand of the child of God who must struggle against the lust of homosexuality. Tell him that the desire and nature are sinful; and you call him to crucify the desire and to mortify the old man, in the great, ongoing, spiritual warfare of conversion. But convince him (if this were possible) that the tendency and condition are blameless, indeed as normal and healthy as left-handedness; and you have accomplished his spiritual ruin.

That the acceptance of homosexual nature implies approval of homosexual practice comes out clearly both in Thielicke and in Scanzoni and Mollenkott.

Having called for acceptance of homosexual nature, Thielicke immediately asks the inevitable question: “Does this acceptance mean, then, that a person thus constituted may act in accord with his constitution, that this fateful habitus may be actualized?” His answer to this “ticklish question” is that this is permissible, if the homosexual is “willing to structure the man-man relationship in an ethically responsible way.” For a Christian theologian to demand celibacy is both harsh and unBiblica1. A sympathetic pastor will advise “the optimal ethical potential of sexual self-realization” i.e., homosexual acts with other homosexuals in private.

Where Thielicke treads ever so cautiously, Scanzoni and Mollenkott rush in. They rail against professing Christians who condemn homosexual relationships and practice out of hand. With egregious begging of the question, they point to “sincere homosexual Christian(s)” (p. 62). (Wonderful to relate, among the examples of Christian homosexuals given by Scanzoni and Mollenkott are Michelangelo, Erasmus of Rotterdam, and W. H. Auden!) They call upon the Church to accept practicing homosexuals and homosexual “friendship,” i.e., a “committed love relationship analogous to heterosexual marriage” (pp. 111, 122ff.). The practicing homosexual is our neighbor; and every Christian must love him with a love that accepts his nature and approves his behavior. If these evangelical authors have their way, evangelical churches will be conducting evangelical wedding ceremonies for the evangelical marriages of homosexuals.

Theologically, the position that exonerates the homosexual condition, while condemning homosexual deeds, is the denial of the doctrine of original sin. For Protestants to adopt this position is for them to concede the truth of Roman Catholic dogma, vigorously controverted since the Reformation, that concupiscence (the evil desires of fallen human nature) is not itself sin (cf. “the Canons and Decrees of the Council of Trent,” Fifth Session, 5). At stake are vital issues, e.g., the total depravity of human nature and salvation by grace alone, apart from all human effort.

For Reformed churches, or members, to hold this view is for them to contradict their own Confessions. Sin is not only deeds; it is also the corrupt nature from which the deeds arise. Sin is not located in the act of the will alone; sin is located, basically, in the depraved nature in which we are conceived and born (Heidelberg Catechism, Q.’s 5- 7). Our great wickedness is not what we do, but what we are (Heid. Cat., Q. 8). God is not only terribly displeased with our “actual sins,” but also with our “original” (literally, “inborn”) sins; and He will punish these inborn sins, i.e., our nature, our condition, our desires, as well as our actual sins (Heid. Cat., Q. 10). The Spirit-directed conscience does not accuse a man only of acts of disobedience against God’s commandments; but it accuses him also of being “still inclined to all evil” (Heid. Cat., Q. 60). Included in the debts which Christians ask God to forgive daily is “that depravity, which always cleaves to us” (Heid. Cat., Q. 126). He who runs may read the teaching of the Canons of Dordt in heads III, IV and the teaching of the Belgic Confession in Article XV.

To be sure, we are, all of us without exception, conceived and born sinful. Our nature, body and soul, is “disordered,” i.e., unrighteous, and depraved. It is an unholy caldron boiling with evil desires of all kinds. This monstrous unnaturalness is now natural for the children of Adam. But this nature is itself our sin; every man is responsible before God for being thus disordered and depraved. The evil desires that boil forth from our nature are themselves our sins, altogether apart from our assenting to them and carrying them out; every man is guilty for his lusts.Romans 6:8 calls the corruption of the old, sinful nature, “the body of sin.” In Romans 7:5, evil desires are called “the motions of sins.” According to Romans 7:13ff, sin is not only a choice of the will, or a deed, but a mighty (although not reigning) power dwelling and working in the nature and members of the regenerated child of God.

In keeping with Scripture’s condemnation of the totality of sin—sin in root and branch, and not in branch only—the apostle of Christ condemns homosexual nature, as well as homosexual deed, in Romans 1. Homosexual desires are “vile affections” (v. 26) and burning lust (v. 27). Homosexual deeds proceed from a man’s mind; and that mind is “reprobate” (v. 28), i.e., a mind which is not approved by God, but condemned as evil. The homosexual mind—the disposition, the tendency—is reprobate.

For this sin, both as regards passion and practice, the impenitent, practicing homosexual is responsible. His is not a “minimal responsibility” but the maximum responsibility. He is not a helpless victim of his genes, or a passive pawn of disordered nature, any more than the “constitutional” liar, the “habitual” thief, or the drunkard. Women change the natural use, deliberately and actively (v. 26). Men leave the natural use, willingly, and work, energetically, that which is unseemly (v. 27).

Therefore, they are punished by God with death. The State may legitimize homosexual behavior (as “the Wolfenden Report” of 1957 recommended for Great Britain: “That homosexual behavior between consenting adults in private be no longer a criminal offense”). The churches may sanction homosexuality, as many are doing. But the judgment of God is that they which practice such things are worthy of death (v. 32).

To this judgment of God, the child of God who has been converted from his homosexuality assents. His comfort is not the denial of his sin, but the confidence of his faith in the promise of the gospel, that Jesus Christ made Himself fully responsible for his homosexual acts of the past and for the corrupt nature, with its foul desires, that still remains in him, enduring God’s just judgment of death in his stead on the cross. 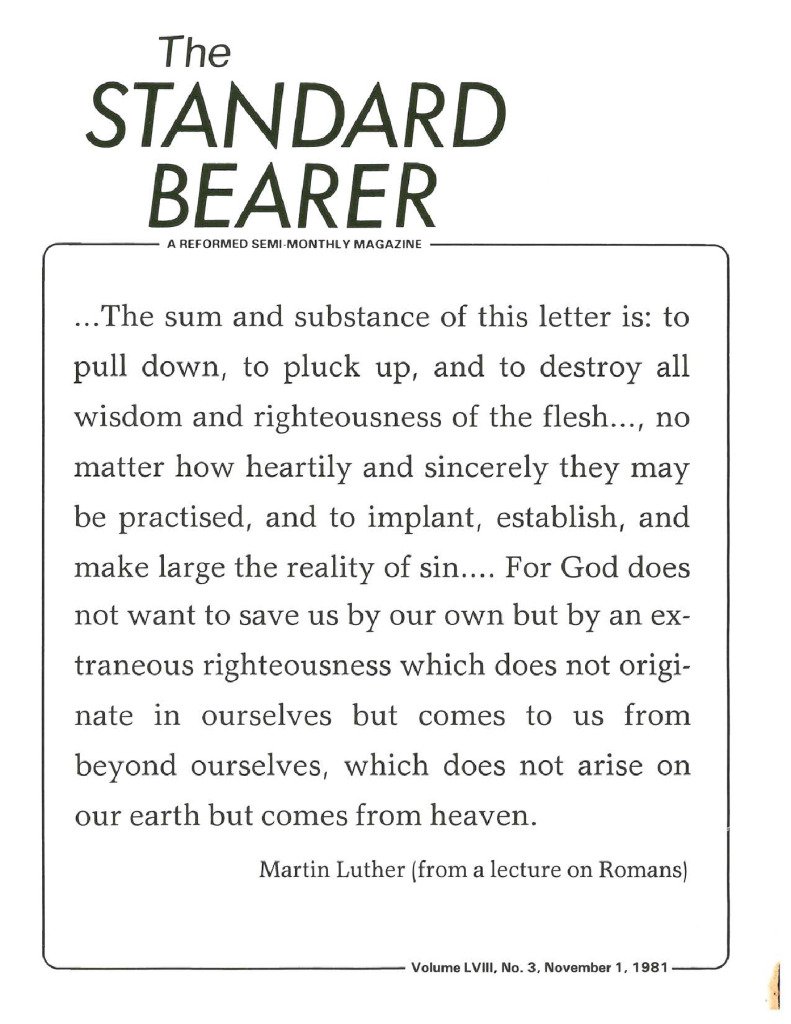