The Value of Series Preaching

The Value of Series Preaching

The very subject of this article suggests that it deals with the means of grace, and more particularly with the most important means of grace,—the preaching of the Word. To be still more specific it treats not the preaching itself as to idea, requisites, methods, etc., but the method and manner in respect to the subject matter of the preaching. Series preaching. And the purpose of this article is to show the value of such preaching. This indicates that the first question is not how we like series preaching, but what is its value, its spiritual value. Only too often do we evaluate things according to our likes and dislikes, tastes and distastes, not taking into consideration their benefit and value. But the all-important question in respect to matters as these is—what is its import for the militant church upon earth? Therefore such must be our criterion.

To state it positively series preaching is successive preaching on a certain book or character or concept of Scripture. The minister then has a series of connected successive sermons on that one subject. The most common series preaching is that on certain books of Scripture. But it is also possible to preach a series on certain characters of Scripture, such as John the Baptist, Elijah, Moses and others, or on a prevalent concept of God’s Word, such as faith, God’s judgments or the return of Christ.

But, shall we see and know the value of such preaching, we must keep before our minds one fundamental element of Scripture. And that is that Scripture is a unity and that there is a unity in the different parts of Scripture. Scripture with its many different kinds of books, historical, poetical, prophetical, evangelical, and epistles is one whole. It is the one complete revelation of God. In Scripture there is a unity, and all the different books tend to reveal that one revelation of God in Christ Jesus. But there is also a certain unity in Scripture. Various books and groups of books form a unity by themselves. And these different unities form that one grand unity. Quite plain it is, e.g. that the first five books of the Bible, called the Pentateuch form a unity, so also the four Gospel narratives, and also that individual books teach one main idea, e.g. the epistle to the Romans, the Ephesians, etc. In these the apostle has in mind one main idea and that he treats from various viewpoints. But the concepts of Scripture are one too. Faith, love, judgments of God we find mentioned in many, many different places and connections. Nevertheless each one when all the different passages are explained in the light of the whole convey to us one main idea.

Series preaching, then, is a preaching on one of such unities, treating it from beginning to end. A series on the whole of Scriptures, which is quite impossible, would reveal to us the one idea of Scripture, the one unspeakably glorious revelation of God in Christ Jesus. Such we do have, however, in a compendium, n.l.—the treasure of the Heidelberg Catechism. But so series preaching on an individual subject of Scripture also exposes the one main idea and truth of God embodied in it.

First of all, by means of it the church maintains the truth. We do not mean to say that other preaching can be of no value or relative value. It certainly does have. But we do think it safe to say that without any series preaching whatsoever, including that of the Heidelberg Catechism, the church will soon wander away from the truth and be found drifting in dangerous waters. Series preaching expounds the truth and certain truths of God’s Word which the church can receive in no other way. If the minister from Sabbath to Sabbath and year to year preaches on text’s chosen at random there is a real danger that he will certainly omit some and most probably many fundamental truths. By means of series preaching, however, he is bound to the subject treated, and therefore must preach on all the truths expressed in it in connection with the whole of the Word.

Series preaching also presents the Christ in all His riches, boundless grace and unfathomable love. Each book and each subject centers around that Christ, viewing Him from its own peculiar viewpoint. And no more than we can see the beauty of a painting without seeing the whole, no more can we see that Christ in all his glory in that subject without series preaching.

We must all admit that we forget much of that which we hear in church, even most of it. To turn the question about; how much do we really remember? And the answer is really nothing short of appalling. But series preaching, by means of its necessary repetition and emphasis of the one idea of the subject at least drives one thought home and quite likely will make an indelible impression upon the attentive listener. Such we do with our children. When we try to teach them many things at one time they are very apt to forget all of them. Better it is therefore to dwell on one point at a time. Then we can be quite sure of some lasting fruit upon our work. In that way a congregation after many years of frequent series preaching will retain and know something about certain subjects or books of Holy Writ, which “vrije stof” preaching would not give her. Let me make a very plain and concrete comparison. Suppose that there are two congregations, both with ministers of somewhat equal qualities. The one for twenty years has had series preaching at many times on various books of Scripture, say on the epistle to the Romans, Ephesians, the book of Revelation and a few others. But in the other the minister or ministers have preached no series at all, but for twenty years on texts chosen at random. The former, beyond a shadow of doubt, will have more lasting benefit and profit than the latter.

In the fourth place series preaching edifies the congregation as no other preaching can do. Each congregation has its own weaknesses and needs. Such was true of the seven churches of Asia Minor, and also of those to whom the apostles wrote. The church at all times is still far from the stage of perfection. Now it certainly must be admitted that the minister doesn’t always see those peculiar needs and weaknesses, even with the best attempts. Therefore without any series preaching he is apt to overlook or forget some and leave some needs in dire want. Another factor that enters here is that the minister himself also has his own tastes and distastes for texts, and without any series preaching he is apt to preach on nothing else but the things that please his taste. But by doing so all the time he very likely will build up the congregation only in part, leaving much unstrengthened, and possibly without necessary admonition. But series preaching tends to build up and strengthen and supply from all viewpoints. Not that the minister who preaches on series much of the time will strengthen all the weaknesses, and all the needs, omitting none, but will certainly do more than if there is no series preaching at all. It gives a better “balanced diet” with all the necessary “vitamins”. Besides Scripture lends itself to this. As mentioned, the churches spoken of and to in the New Testament also had weaknesses. Now it is not accidental that the apostles wrote to just these churches and not to others. These churches in their weaknesses and needs and conditions are the picture of the one church of all ages. Many similar weaknesses and conditions can be found today. Therefore God determined the apostles to write them, not only for their benefit, but for the benefit of the church of all ages. And so series preaching on some of these epistles can also be of much value to us.

Not that the congregation will always like it. Some members prefer series preaching, others not. Each has his likes and dislikes. But so do our children. They don’t like spinach, or many other substantial foods, which are less palatable. But it isn’t a question what we like (at least shouldn’t be) but what we need. That should be our attitude in respect to the kind of preaching our minister gives us.

And finally by means of series preaching the congregation knows from week to week, before each Sunday what the minister is to preach on. When he preaches at random such is impossible, for one Sunday may find him in Paradise and the next in Rev. 22. But not so with series preaching. And this knowledge means much to the attentive church attendant. He wants to know, want to learn and grow. Therefore he by means of this is enabled to read and study the text to be preached on at home. I know, in general this is done very little, even where it is possible, but its real benefit is undeniable. As it is necessary for the child to know the arithmetic problem before it can understand the solution given by the teacher so we must really know the text, shall we understand it and have lasting benefit. 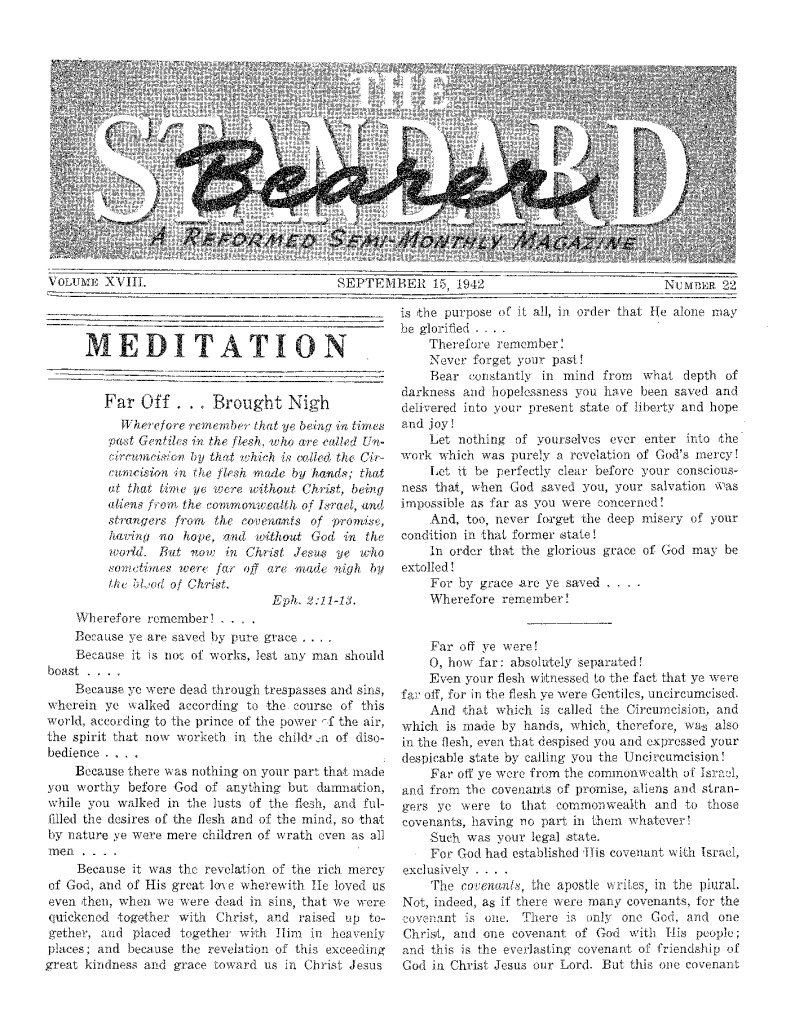