The URC Synod’s Decisions Regarding the Federal Vision

The URC Synod’s Decisions Regarding the Federal Vision

The Federal Vision (FV) movement is a heretical movement plaguing Reformed and Presbyterian Churches. In the past the FV has reared its ugly head within the United Reformed Churches in North America (URCNA). The URCNA’s Synod, which met from July 26-29, dealt with the FV in an attempt to refute its errors, especially its heretical teachings regarding the doctrine of justification. The FV teaches the heresy of justification by faith and works.

Was synod successful in refuting the FV? Christian Renewal reporter Glenda Mathis believes it was. She writes, “Synod 2010 proved that the federation is united in its commitment to refuting the errors of the Federal Vision and to standing firm for the biblical truth of justification by faith.”¹ Dr. R. Scott Clark, of Westminster Seminary California, also believes the synod was successful. In light of synod’s decisions, “there can be no question,” according to Dr. Clark, “that the URCNA have rejected the self-described FV movement root and branch.”² The desire that the FV be rejected “root and branch” is commendable! But whether the actions of the URCNA Synod have done so is debatable.

In the build-up to the meeting of this year’s synod, much attention was focused on a study committee report on the FV. The URCNA Synod of 2007 appointed “a study committee to examine by the Word of God and our Confessions the teachings of the so-called Federal Vision and other like teachings on the doctrine of justification; and present a clear statement on these matters to the next synod for the benefit of the churches and the consistories.”³ The study committee finished the report, which is sharply critical of the FV, well before the convening of Synod 2010 and publicly distributed its report so that it could be studied prior to the synod.

Prior to synod, controversy arose when the Consistory of the URC of Nampa, Idaho published a response that sharply criticized the study committee report.4 Nampa’s Consistory claimed it was not trying to “defend the orthodoxy of the FV” but only to make sure that the report was “accurate, careful, and fair.” According to Nampa’s Consistory, the report fails on all three counts. The main charge of Nampa’s Consistory is that the report does not fairly represent the teachings of the FV and therefore should not be adopted by synod. Perhaps implied in Nampa’s criticism is the specious charge, commonly made by proponents of the Federal Vision, that anyone who criticizes the FV as the study committee did can expect only this for a response: “gasp—you sinned against the ninth commandment!”

Nampa’s response to the study committee report elicited strong reaction. Debate raged on the Internet. Rev. Doug Barnes, pastor of the Hills, MN URC, agreed with the Nampa Consistory that the report was problematic and should not be adopted. About Nampa’s response he wrote, “Having read it, I heartily endorse both the paper [Nampa’s response] and its conclusions. (If anything, had I written it, I doubt I would have been as gentle.)”5 Others were critical of Nampa’s paper. Dr. J. Mark Beach (professor at Mid-America Reformed Seminary) defended the study committee’s report over against Nampa. In his lengthy response, Dr. Beach expressed that he was “mystified” by the fact that “Nampa’s comments regarding the FV prove to be neither hot nor cold, for Nampa is not prepared (or is unwilling) either to defend FV orthodoxy or to declaim FV ambiguities on pivotal doctrines of the gospel.”6 It seemed the lines were being drawn for battle at synod.

With such vigorous debate leading up to synod, it is surprising that the reports coming out of synod indicate the study committee report sailed through synod with no controversy, indeed with almost no debate at all. Glenda Mathis reported: “Although the study committee’s report has received some criticism (primarily on the internet), those criticisms did not surface during either advisory committee meetings or on the floor of Synod. A clearly unified sense of purpose and spirit of cooperation pervaded both advisory committee meetings and plenary discussion. Synod adopted the report’s revised recommendations with unequivocal unanimity.”7 Mathis concludes the lack of debate proves there is unanimity in the URC in opposing the FV. John Van Dyke suggests it may be that the lack of debate indicates “unanimity,” but it could also indicate “a lack of time to discuss more thoroughly” (August 18 Christian Renewal, p. 4). Whatever the reason, the lack of debate is surprising, especially in light of the fact that Rev. Doug Barnes, who publicly stated that he was perhaps more critical of the study committee report than the Nampa paper, was a delegate at the synod.

Perhaps there is a simpler explanation for why the report was the subject of little debate: the report itself was never voted on by synod. There is some confusion about this. Professor R. Scott Clark reported that “the justification report…passed without audible dissent.”8 However, before synod Dr. Beach wrote, “it ought to be mentioned that whatever flaws mar the Study Committee Report, what the Committee asks the churches to affirm is not the Report itself but only its closing recommendations (emphasis mine).”9 Glenda Mathis’ report in Christian Renewal indicates that synod did indeed only adopt the recommendations at the end of the report and not the report itself. Perhaps delegates who opposed the report, such as Rev. Barnes, determined it was not necessary to engage in debate over a report that was not being voted on by synod.

What did Synod adopt? It adopted a recommendation, “That Synod urge all office-bearers to repudiate Federal Vision teachings where they are not in harmony with the following articles from the Three Forms of Unity.” (Mathis reported that this statement was followed by “nine confessional quotations,” but she did not include those quotations in her report, August 18 Christian Renewal p. 8).” Also, synod adopted an affirmation of 15 teachings of Scripture and the Three Forms of Unity.10 It seems these 15 teachings were affirmed in order to contradict errors of the FV.

It is striking that synod did not adopt a decision that officially identifies and condemns specific errors of the FV. Had the synod adopted the study committee report, it would have officially condemned specific teachings of the FV, which would have been a sharper repudiation of the movement. Instead synod adopted a rather bland general condemnation of the movement’s teachings only “where they are not in harmony with…the Three Forms of Unity.”

This is a weak and ineffective way to deal with the FV. The trouble with this approach is that FV proponents are a wiggly bunch. Some of them readily admit their views contradict the confessions. But many of them claim they can find wiggle room for their views within the confessions. So one can expect that the response of many wigglers/FVers to the synod’s affirmation of the 15 scriptural/confessional teachings will be, “but of course, I affirm those things too.” In fact, one of the FVers has already responded to synod’s decision in this fashion. James B. Jordan, a well-known proponent of the FV, claims there is only one of the 15 affirmations that touches upon an area of “real difference” between the synod’s views and his views (cf. the Sept. 15 issue of Christian Renewal, letter to the editor on p. 5). Jordan is an advocate of the position that children should be allowed to partake of the LS, known as paedocommunion, and he readily admits that he disagrees with the synod’s affirmation that children of believers must make confession of faith before partaking of communion. But what about synod’s important affirmations concerning more important issues in the debate such as election, justification, and the perseverance of the saints? Yes, Jordan says, I agree with all those affirmations! Thus, the fact that none of the delegates voted against the 15 affirmations does not mean that all the delegates were united against the Federal Vision. James Jordan’s response indicates that if an FVer (an FVer, at least, who is not an advocate of paedocommunion) were a delegate to synod he could have easily voted in favor of the affirmations! Had synod adopted a “rejection of errors” section in the manner of the Canons of Dordt, it would have more sharply repudiated the errors of the FV.

Instead of dealing with the root of the FV heresy, the report focuses on one of the branches that sprout from the root, the FV’s doctrine of justification (which is what Synod 2007 told the committee to make its focus). The report does faithfully explain and defend the Reformed doctrine of justification by grace alone, on account of Christ alone, by faith alone. Thus, synod did cut off the FV’s teaching concerning justification. But cutting off a branch is not the same thing as pulling out the root.

But what if the defenders of the Reformed faith at the URCNA Synod had approved a report that condemned the FV’s teaching that the covenant is conditional? This is the question that brings us to the heart of the problem with the URCNA’s handling of the error of the FV. It is commendable that the synod of the URCNA is opposed to the FV heresy. It is commendable that the synod of the URCNA is willing to take action and denounce the FV heresy. We desire and fervently pray that the URCNA will be able effectively to root out the FV heresy. But heresy is not effectively dealt with by condemning false teachings. The way to purge the church of a false teaching is to discipline false teachers.

4 The report can be found at http://urcnampa.org/resources/interaction.pdf, October 4, 2010.

6 “Comments on the Paper of the Consistory of the United Reformed Church of Nampa, Idaho,” http://johannesweslianus.blogspot.com/2010/06/united-reformed-churches-to-deal-with. html, October 4, 2010. I share Dr. Beach’s surprise that Nampa’s Consistory is more concerned about dealing with the FV charitably than it is about condemning its egregious errors. It is ironic that the Consistory is sharply critical of the report of the study committee while it argues for a charitable attitude towards the FV.

9 “Comments on the Paper of the Consistory of the United Reformed Church of Nampa, Idaho,” http://johannesweslianus.blogspot.com/2010/06/united-reformed-churches-to-deal-with. html, October 4, 2010. 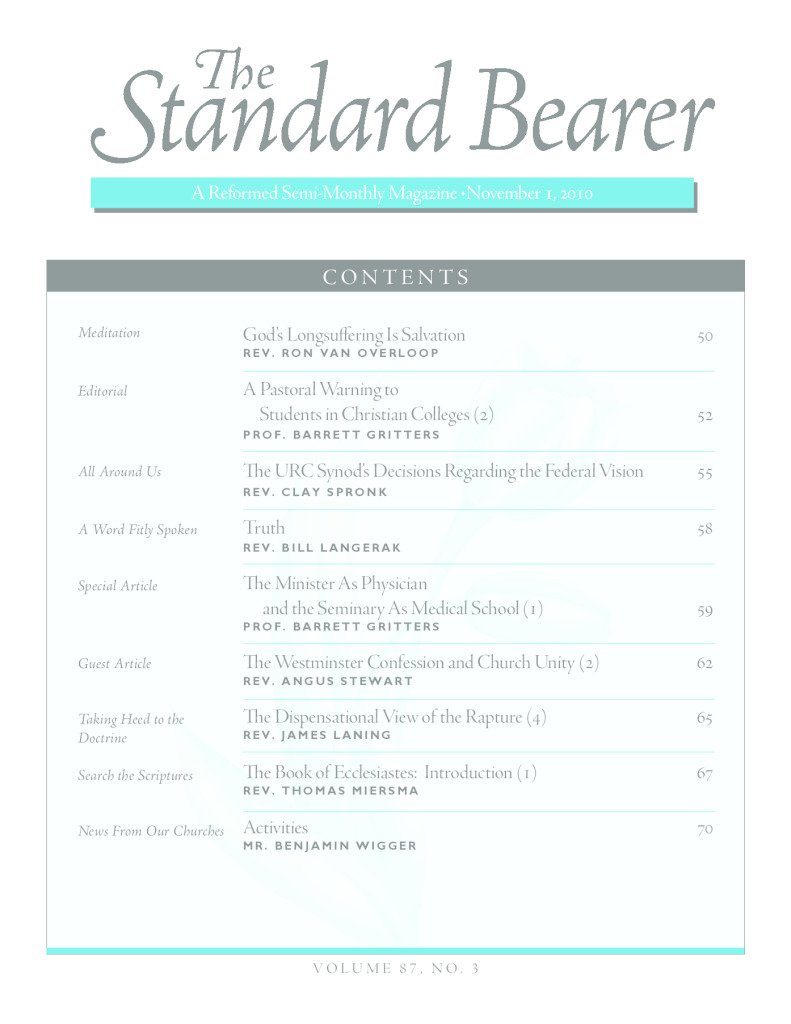