As is the case every year since 1940, the annual synod of the Protestant Reformed Churches will convene in June. Last year’s synod appointed First PRC in Grand Rapids as the calling church for the Synod of 2019. The last time that First hosted the meetings of synod was 2001. (In 2010, Southeast PRC hosted synod in First’s church building.) At the Synod in 2001, a certain Mr. Angus Stewart, student of the Covenant Protestant Reformed Church of Northern Ireland, was examined. His examination was a kind of hybrid—synodical and classical combined. Two elders from the Covenant PRCNI were present. After the exam, synod voted that Mr. Stewart had successfully sustained the examination, and informed the sister congregation in Northern Ireland “that he is, in our judgment, fully qualified for the gospel ministry and therefore is worthy to be declared eligible for a call.” Prof. Decker spoke at the graduation ceremony that week. Subsequently, Covenant PRCNI did call the brother and he was ordained into the ministry.

Staying with the Synod of 2001 for a bit longer, we note that this Synod rescinded a 1956 prohibition of administering the Lord’s Supper on a mission field, and granted that right, under certain conditions. The Foreign Mission Committee (FMC) reported (quite fa­vorably) on the mission work in Ghana, and brought a request to declare the Philippines a mission field, which the synod approved, with Doon as the calling church. On the other hand, the Domestic Mission Committee (DMC) reported on its labors in Northern Ireland (its mission field, until Covenant was organized). The DMC also reported in 2001 on the work of its missionary in the eastern part of the USA, and its missionary in the west.

That contrasts with the current work of the DMC as reported to the Synod of 2019. We have a missionary and a mission committee, and they are working, but the Lord is not opening a “great door and effectual.” I do not write this to criticize the missionary or the DMC. I write this, first, to remind the churches that eighteen years ago the PRC was considerably more involved with domestic mission work than we are today. Second,

I write this to urge the readers, all who love the truth that the PRC preaches and teaches, to pray the Lord of the harvest to open doors and to supply laborers. Jesus commanded His church to pray for laborers (Matt. 9:34; Luke 10:2). One such laborer, Paul by name, understood that when he did have opportunity to preach in a given city, and many believed, that this was due to the fact that a “door…was opened” for him—by God (I Cor. 16:9). Accordingly, he asked the church of Colosse, “Withal praying also for us, that God would open unto us a door of utterance, to speak the mystery of Christ.” (Col. 4:3). He sent a similar request to the saints in Thessalonica (II Thess. 3:1). That prayer for “open doors” is not only appropriate, it is much needed today.

With the FMC in 2019, on the other hand, the prayers needed are for laborers. The FMC reports on the exten­sive labors of the three missionaries in the Philippines. Here the Lord continues to give a tremendous amount of work, not only to these men, but also to the three minis­ters of the Protestant Reformed Churches in the Philip­pines (PRCP). When the Acts of Synod 2019 come out, do take the time to read the reports of the three mission­aries. From all the reports it becomes plain that there is an urgent need for more laborers, particularly Filipino pastors and missionaries. The FMC reports that the seminary supervised by the PRCP is to begin instruction in August of this year with one student, and more in the pipeline. This will increase the workload of the three missionaries. It makes one wonder whether the FMC might be recommending calling a fourth missionary in the future. There are still many labors to which the men there cannot devote themselves adequately, such as the monthly meeting in the Southern Negros Occidental is­land where some pastors have expressed a desire to join the PRCP, and some have expressed a desire for semi­nary training, for themselves, or for their young men. Pray the Lord of the harvest….

The Theological School Committee (TSC) reports that the Lord has given two men (Matthew Kortus and Jacob Maatman) to be examined at this synod with a view to candidacy for ministry in the Word. We re­joice in this and pray God’s blessing on these men as they prepare for their examination. Recall that their examination includes preaching a sermon and submitting written exegesis on one passage from the Old Testament and one from the New. What follows is an oral exam before synod—over seven hours of examination—with an emphasis on Reformed doctrine (over four hours). The men will be examined also in church history, Old and New Testament history, church polity, and have a final section on practical matters. These examinations are grueling, but when the students prepare well, the audience can enjoy and profit from it. These are open to the public. The sermons will be delivered on Tuesday morning, and most of the oral examination will be on Wednesday and Thursday mornings. I hope many read­ers will make a point of coming. And, all are cordially invited to join the seminary, the graduates, and their friends and family, the Lord willing, for the graduation ceremony on Thursday evening. That is Thursday, June 13 at 7:30 in First PRC.

The TSC also seeks synod’s approval for admission of four men to begin seminary training for the coming school year. More information on that after synod.

Another significant submission of the TSC is the ag­gregate list of ministers as nominees to replace Prof. R. Cammenga. Professor Cammenga will reach the age of 65 this year, and synod will vote on his replacement for the areas of Reformed Dogmatics and Old Testament Studies. The TSC brings to synod the following ministers: Revs. J. Engelsma, C. Griess, B. Huizinga, and R. Kleyn. The synod will narrow this list to a trio, and from that a primus and secundus are to be selected. In this way, the churches seek the Lord’s will to be done in appointing a man for the seminary.

In the matter of professor replacement, two years ago Prof. D. Kuiper was selected to replace Prof. Dykstra. Prof. Kuiper has completed the requirements of the ThM degree and will begin giving instruction this com­ing school year, teaching Greek, Hermeneutics, and Re­search Methodology. The plan is that over the next three years he will take over all the courses in his area. This is a good system, allowing the new man to obtain a higher degree and gradually take on the courses he must teach.

The TSC reports that the construction on the addi­tion to the seminary library for a new archives room for the churches is on schedule.

And finally, this important information from the TSC. After 30 years of service, Judi Doezema has retired as the secretary of the seminary. This selfless service was not­ed in the Standard Bearer (Dec. 15, 2018) and even that only begins to capture what Judi’s service has meant to the seminary, not to mention the denomination. The Lord provided a very good replacement, but no one who was interested in being at the front desk from 6 a.m. to 5 p.m. Monday through Friday. For the Doezemas’ many years of faithful service, the churches give God heartfelt thanks.

The Contact Committee’s (CC) report is packed full of interesting news from our closest friends and many other contacts that the Lord is giving the PRC. Our sister congregation in Singapore, Covenant Evangeli­cal Reformed Church, continues to enjoy growth, both from new members joining as well as babies born in the congregation. CERC has been vacant about a year and a half. Grandville continues to call for a minister on loan. Eight different minsters have willingly trekked to Singapore to assist Covenant with preaching and teach­ing, and our sister expresses deep appreciation for this. Most notable is the service of Rev. and Mrs. A. denHartog, who have spent many months in CERC. It is hoped that many other of our minsters will be released by their consistories to help. Covenant plans to send deacon Lee Meng Hsien as a fraternal delegate to the 2019 Synod.

The CC reports that our sister in Northern Ireland, Covenant Protestant Reformed Church, is experiencing spiritual unity and peace in the congregation. The mission work in Limerick (Republic of Ireland) is also active and experiencing modest growth. Rev. M. McGeown plans to represent CPRCNI at the synod this year, D.V.

The CC is enjoying the first official year of the sister-church relation with the Protestant Reformed Churches in the Philippines. The three congregations are active and growing. Another congregation is mak­ing request to their classis in June for entrance to the denomination. The missionaries have been actively involved in preaching and teaching in this group, and it is expected that the request will be granted. Lord willing, the PRCP will send Rev. J. Flores at their representative.

In the last year, the PRC in the Philippines and Covenant ERC in Singapore worked to establish a sister-church relationship, and in accordance with their respective Contact Committee’s constitutions, come to the synod of the PRCA to be sure that our churches have no objection. The CC brings a recommendation that includes an expression of thanksgiving to God and great joy at this new development. Covenant ERCS and Covenant PRCNI have already established a relationship.

The PRC have a corresponding relationship with the Evangelical Presbyterian Churches in Australia (EPCA). A conference is planned with the EPCA in Brisbane in July on the 400th anniversary of the Synod of Dordrecht. Especially exciting for the EPCA is the fact a student will be enrolling in the Protestant Reformed Seminary this fall, D.V. Mr. Isaac Peters, his wife Rebecca, and their four children are planning to come in July, and the Grace PRC is already making plans to help them settle in.

The CC reports on the ongoing and developing rela­tionship with the Bekennede Evangelish-Reformierte Gemeinde) (BERG) in Giessen, Germany. A delegation is planning a visit to Germany this fall, D.V. Also, the CC keeps in contact with the Reformed Churches in Namibia and South Africa. Unofficial contact is maintained with some individuals in South Korea and in Mexico, primar­ily through two local PR congregations. The CC reports that NAPARC continues to invite the PRC to send ob­servers to their annual meeting, even though the PRC has indicated why it cannot join NAPARC.

The CC also brings to synod material from the Psal­ter revision committee for approval of the work finished thus far. The CC asks synod to make preparation for the treatment of the final product and a special commit­tee to examine all the work in order to bring recommen­dations to a future synod.

This report on the agenda is getting a bit long. There is more to be found in the agenda. Two protests con­cerning the Psalter revision, and three protests on matters treated at last year’s synod. Reports from many other committees and individuals who faithfully serve the churches will be acted upon at synod. There is much for which to pray. May God give the delegates wisdom and courage in dealing with the matters of the agenda, the work to which Christ has appointed them and for which He is equipping them.

If you are able, do join the twenty synodical dele­gates and four advisors in asking God’s blessing on Synod 2019 by attending the pre-synodical service in First PRC, Monday, June 10, at 7:00 p.m. Rev. R. Van Overloop, president of last year’s synod, will lead the service, D.V.

I hope to see you there. 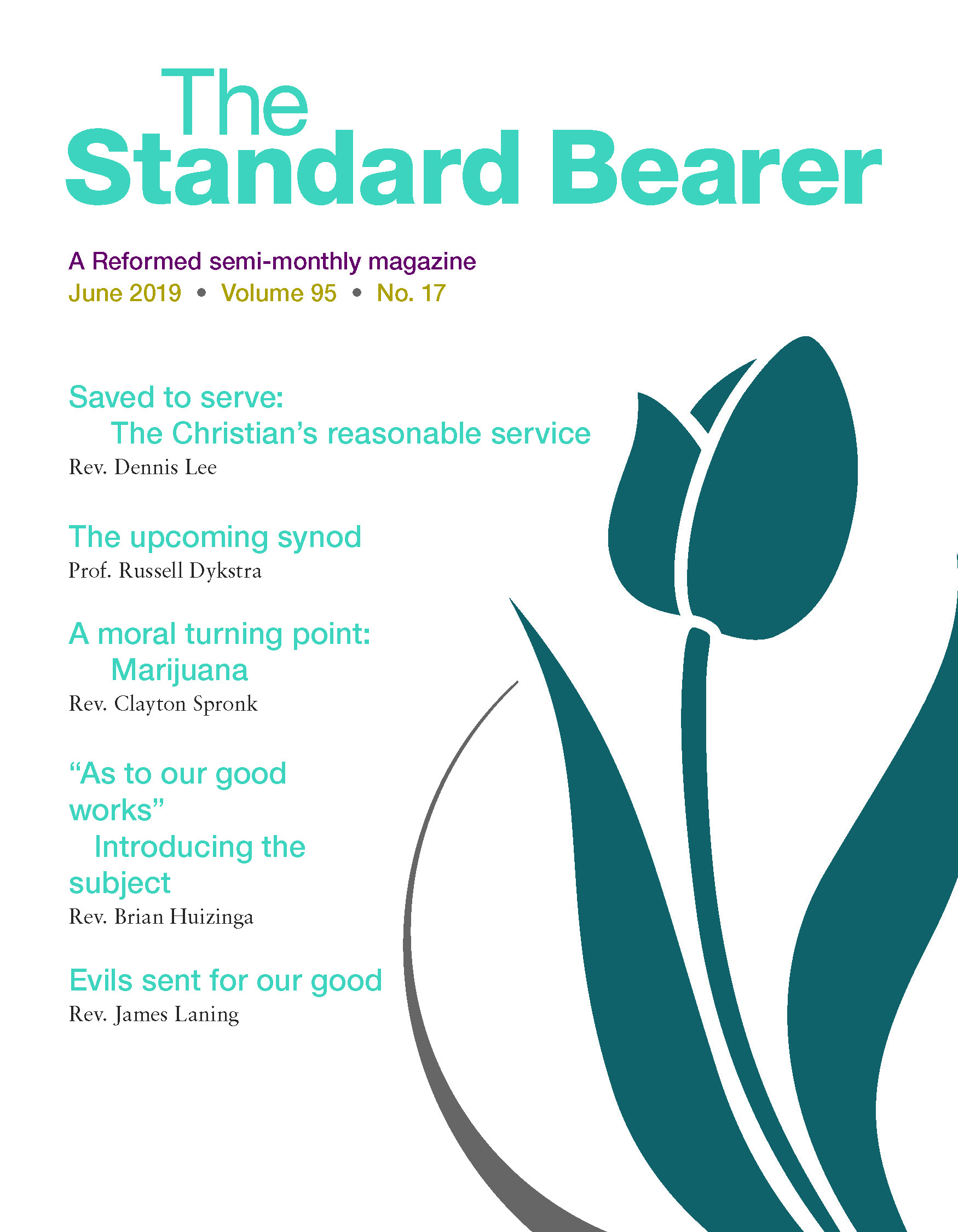